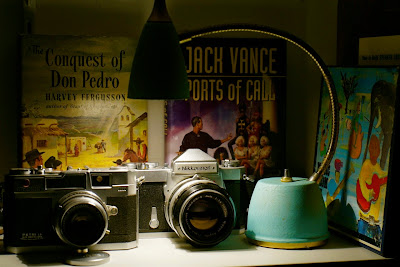 Stuck the Lumix L1 on a tripod one night and took this shot; I guess it could be called a "still life", although I only have a vague clue what that actually means.  Could it be a descriptive phrase left over from paint on canvas terminology, meaning whatever it is you're doing a picture of, it sits still and doesn't fidget, fart, or insult the artist?  Maybe.

Here's a few words about about some of the items on that book shelf above:

• Set during a time of great change for the peoples of the Rio Grande Valley, Harvey Fergusson's "Conquest Of Don Pedro" evokes the waning days of 300 years of semi-autonomous Spanish Colonial self-rule in the region, prior to its annexation by the United States, as seen through the eyes of an itinerant Jewish peddler who travels to, and settles there.  Like Father Jean Latour, the main character in that other great work of New Mexico historical fiction, Willa Cather's "Death Comes For The Archbishop", Leo Mendes is an outsider who, upon coming into an utterly foreign society, not only is gradually assimilated into that culture, but also over time becomes an important part of it.

Even though the events of "Conquest Of Don Pedro" take place in another century, anybody who's ever lived along the upper Rio Grande will read it and know that Fergusson really gets it right - his descriptions of the landscape, the architecture, the people, even the high desert air itself, still ring true today.  If you really want to get a good feel for New Mexico, as well as soak up some of its history, short of actually being there, this book, along with Cather's, are all you need.

• Jack Vance is one of a handful of the all-time greatest authors of science fiction and fantasy, period.  "Ports Of Call", and its concluding volume "Lurulu" are the last books that Vance wrote, published in 2002 and 2004, capping a long writing career that began in the mid 1940s.  In many ways "Ports Of Call" is a distillation of all the stylistic traits and narrative devices that have made Vance a unique literary voice: compact yet highly descriptive portrayals of the many, often bizarre, ways that human society - and the humans themselves - might evolve in isolation on far flung worlds over the next few thousand years (for sociology is the "science" in Jack Vance's science fiction); high adventure, sometimes with no apparent connection to or affect on the plot; potentially lethal overland journeys complete with details of the geology, wildlife, and botany of the regions travelled through; extremely droll and dry humor often regarding grim or otherwise tragic events; and realistic descriptions of the cuisine and drink of those far worlds.

In the case of "Ports Of Call", the drink is beer - the four man crew of the tramp space freighter Glicca travel the back water commercial space routes, seeking profit but often winding up with unforeseen peril or comic situations, and whenever possible during their adventures, sampling as many as possible of the almost infinite varieties of beer and ale from master brewers throughout the galaxy.  Where do I sign up?

• "Music From Big Pink", by The Band, released in 1968 - this is a reel-to-reel box version here.  Sometimes Bob Dylan's backup group, The Band was totally unique in their day, as original sounding as it was possible to be within the constraints of a rock band musical format.  Big Pink, their first album, was so crazy outa left field one of a kind distinctive, that it took awhile for everybody to pull their jaws back up, close their mouths, and drive to the record store and buy a copy.  Cover art by Mr. Dylan.

• Petri 2.8 Color Corrected Super.  Made by the Kuribayashi Camera Co, in (where else?) Japan.  Sort of looks like a copy of a Leica, it's a rangefinder focus 35mm format, with a fixed-mount 4.5 cm f2.8 lens and an ultra quiet leaf shutter.  The Petri 2.8 was my father's first 35mm camera, bought new in Japan when he was stationed with the army in South Korea during the mid 1950s.  I ran a lot of rolls through it back in the film days, and what's interesting is - it took really great sharp and clear black and white photos, usually with Plus X, but with Kodacolor the prints were not quite perfectly focused looking, although pleasing in a dream-like kind of way, like how memories seem to be.  I should really get some of those old shots blown up while it's still possible to do the film thing.

• Nikkormat FT, with a Nikor 50mm f1.4 lens.  From the late 1960s, also made in Japan.  Built like a tank or a brick house or like any other old brass bodied Nikon - literally almost indestructible, always worked, mechanical shutter, only electronics on it is the meter, and most of the time that was turned off.  "Sunny 16" rule of thumb exposures, using the eye and brain, in low light whip out the Sekonic or the Luna, or just use a tripod and guess the exposure - those were fun times, when the mechanics of taking a photograph was as important as the composition of the shot.  Lately this lens has been on a Nikon FM body, another great rugged mechanical shutter 35mm SLR, but less massive than the Nikkormat.

I will confess, though, that I hardly ever shoot film anymore, but...  I can't seem to totally let go of the past, and I'm keeping a couple old film cameras around.  Anyway, they look cool and sexy laying around the house, like the '50s blonde spinet piano that's rarely played but sounds so organically real and toneful whenever it is.  Film cameras may be industrial sculpture, obsolete technology posing as fine art.

• Tensor "High Intensity" lamp.  Also from the '60s, made in New York.  An innovative lamp design, the Tensor company made many different models of these lights, all using a #93 bayonet base automobile bulb powered by a 117VAC to 12VDC step down transformer.  It's possible to put a lower current bulb in and turn a Tensor into a unique night light; a bulb with a higher current draw will be brighter for a while, but eventually the transformer will blow and effectively kill the lamp.  This particular one has a crackle finish turquoise base and shade, with a brass plated gooseneck, shade cap, and bottom plate.  Still works flawlessly after all these years.

• The cute little dog in the photo below is one of those toys that expand when placed in water, swelling to about four times its usual size.  When you take it out of the water and put it on any surface, the puddle under it gradually grows, as the dog shrinks.  It's not apparent what the actual point of all this is, but you have to admit, it's cute.

Photos taken with a Lumix L1, no p-shop.  Click or tap on any picture for larger images. 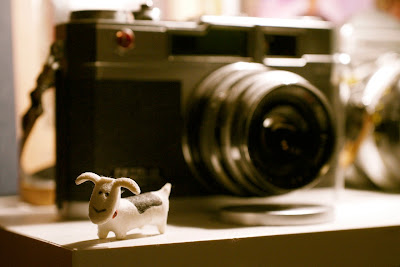 
From a 1983 concert in Tokyo, Japan, Yo-Yo Ma performs Johann Sebastian Bach's Cello Suite No. 6 in D major, BWV 1012.  Twenty eight minutes and thirty seconds of technical mastery, inspiration, and passion, the young Yo-Yo Ma shows why he is very likely the greatest cellist of our time, or indeed, any time.

Also, for those of us with shorter attention spans, here's another video tape recording from the 1980s, when Yo-Yo Ma met up with Fred Rogers (who was himself an accomplished musician and gifted songwriter) at Joe Negri's neighborhood music shop, and played the Buorree from Bach's Cello Suite No. 3 in C major, BWV 1009: 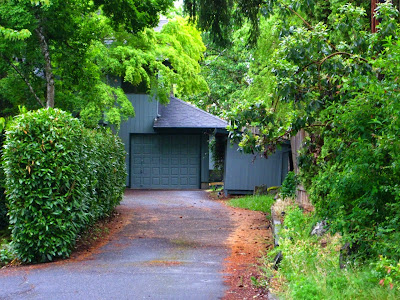 Joe was the sort of perfect neighbor we might wish everyone around us to be like - quiet, kind, always had a friendly word when we happened to meet at the block mailboxes, and his cute little dog Chuck always had a friendly word, too.  Until his retirement, he had been an administrator at the local school district, and decades in a position of authority showed in his persona - calm, affable, and ever gracious, Joe radiated an aura of good-natured strength.

It's possible that, like a lot of other folks, being retired from a lifetime of work seemed to have taken away a sense of direction in Joe's life.  For whatever reason, within a relatively short time he went into a decline, both physically and spiritually, and a strong, capable, alert person gradually became someone unsure of how to face life's daily challenges.  Recently Joe's house has been empty, and one of the caretakers of the property said he had entered a nursing home in another state, and that Chuck was being cared for by a family member.

There was an estate sale this past sunny and warm weekend; put on by a company with an unfortunately tasteless and tactless name - "Worldly Possessions" - it attracted hordes of tactless and tasteless shoppers.  The term grave robbers might be overreaching as far as description, but vultures, hyenas and scavengers may be more to the point.  They blocked driveways all over the neighborhood, the engines and air conditioners of their giant pickups and vans still running, some with loud country music blasting out of open windows, and quantities of trash were left behind.  Soda bottles, McDonalds wrappers, and cigarette butts littered our street and sidewalks after they had all gone home, clutching their assorted treasures, Joe's worldly possessions, back to their suburbs and country ranchitos.

A storm front coming in overnight brought with it the sort of gentle rain showers we like to see in the valley at this time of year; now, there's no need to get out there and water the lawn and flower beds, and the rain and light breeze have cleaned up the usually stagnant Eugene air.  On cool misty days like this, a change occurs with light that alters our perception of color, and the normally green Western Oregon forest we live in seems to be even greener than before.  Despite a mild drought, it's been a great spring so far, and soon we'll have a long, fun and warm summer.  And here on our street, we're going to miss having a good neighbor like Joe, and I hope wherever he is, he's doing well.
Posted by James Aoyama on 11:42:00 AM
Newer Posts Older Posts Home
Subscribe to: Posts (Atom)