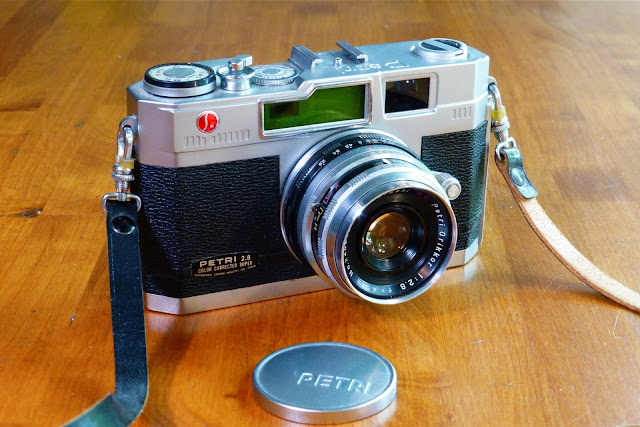 The Petri 2.8 was my father's first 35mm camera, bought new in Japan when he was stationed with the army in South Korea during the mid 1950s. It was also my first 35mm camera; after his untimely death, I found the Petri among my dad's effects and sort of "self inherited" it, the only memento of his that I kept. 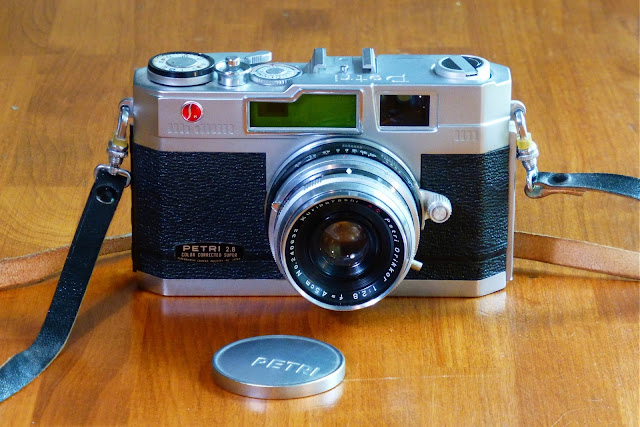 By the early 1970s, the Petri was already obsolete; in the 15 years since its manufacture, the state of the art for semi-pro and professional level cameras had become the single lens reflex interchangeable lens 35mm, popularized by the Asahi Pentax and Nikon F. The now out of date Petri had only a fixed-mount 45mm f2.8 lens, but as many photo enthusiasts have discovered it was, in a way, liberating to be restricted to the use of only one, normal field of view, prime lens. That limitation meant no telephoto shots of wildlife or wide angle panoramic views, but whatever one's own eyes saw, the Petri recorded that very well. 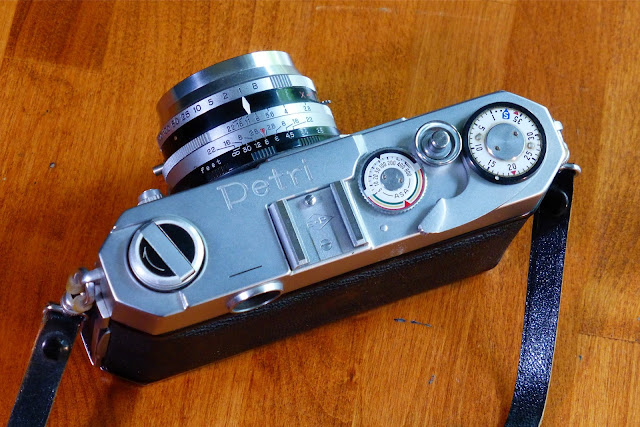 Compact enough to fit easily in the outside pocket of a sport coat or field jacket, the Petri was always readily at hand to grab a quick shot, and its whisper quiet leaf shutter was a lot less likely than a loud clanking SLR to suddenly freeze a rocking party cold dead. This camera didn't have a built in light meter, and I eventually bought a small Sekonic handheld, but I'd already gotten good at guesstimating exposure with the Sunny 16 Rule, and the meter was rarely used. 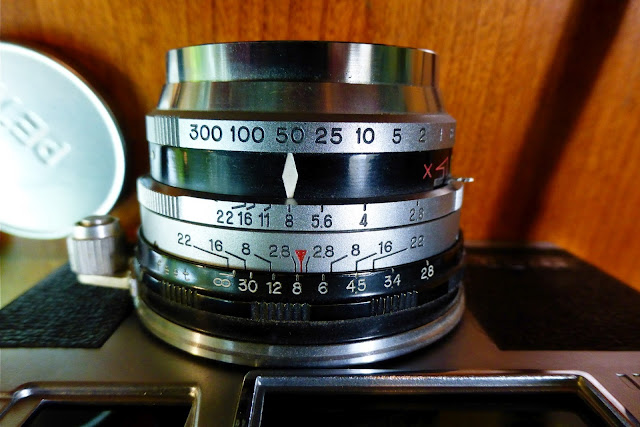 As you can see, even though it's ancient, this camera is still in very good condition. It used to have a beautiful two-piece brown leather form fit case, which did its job well - in fact that case died in the line of duty, literally falling apart while protecting its precious cargo. I gave the case, along with the original strap, a proper burial, with full honors, at dawn in Monument Valley. Coincidentally, after returning from that trip, I bought my first single lens reflex 35mm camera, a Honeywell (Asahi) Pentax, followed soon thereafter by a new Canon AE-1 with multiple lenses, and my photos were never the same again. More precise and accurate, certainly, but most if not all of the indefinable magic and mystery of the Petri's photographs had gone.

I ran a lot of rolls through it back in the film days, and what's interesting is- the Petri took very sharp and clear black and white photos (usually Kodak Plus X or Tri X, and sometimes Agfa), but with Kodacolor the prints were not quite exactly focused looking. Rather than being perfectly detailed, the Petri's color images were pleasing in a diffused, dream-like kind of way. Sort of how memories seem to be. 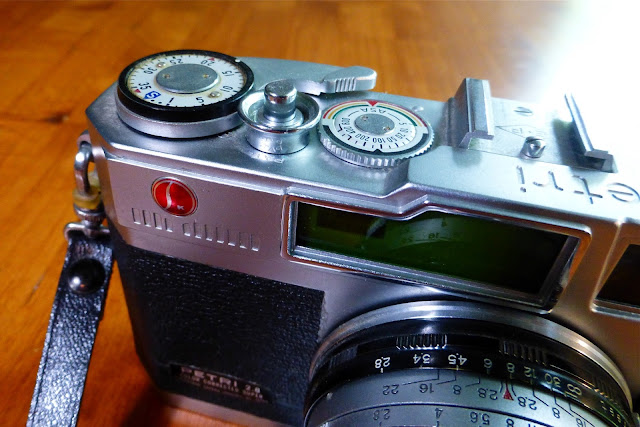 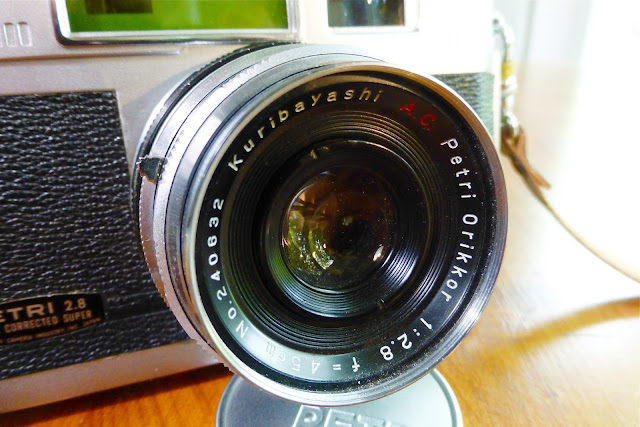 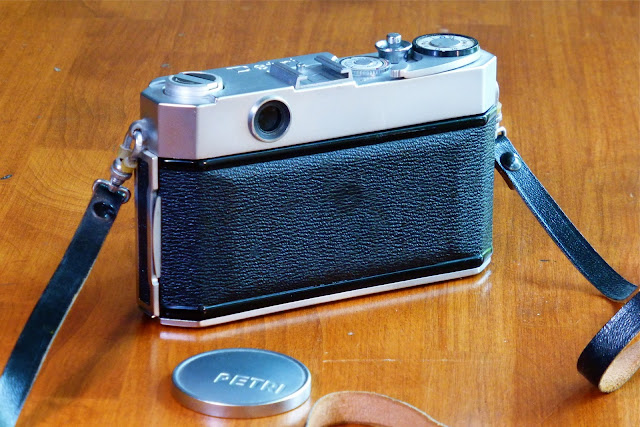 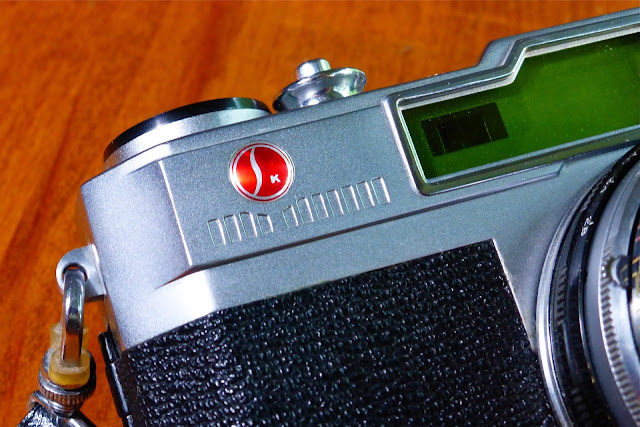 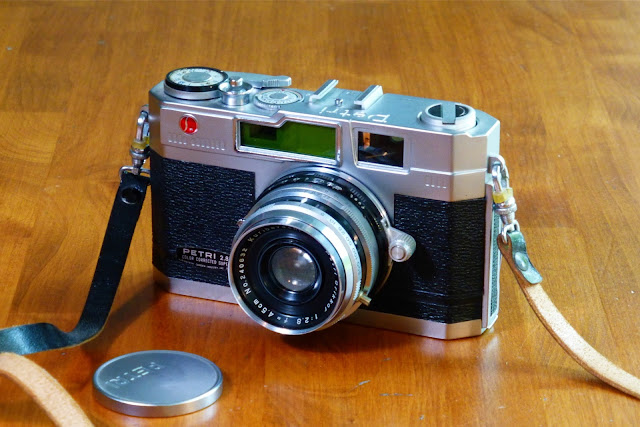 Here are a few more Kodacolor photographs taken with the Petri 2.8 Color Corrected Super rangefinder camera. Each photo has a story behind it, some of which are a short paragraph long, others somewhat longer, and a couple are 200+ page novel length. Maybe someday they'll be retold, but for now we'll just let the images stand alone, and be as expressive as a Kodacolor print from the last century can be.

The last photo above wasn't taken with the Petri 2.8, although it is a Kodacolor print. It was snapped by Billy with his brand new Kodak Instamatic 110, which at the time was state of the art for affordable pocket cameras, and actually took quite decent images, considering its smaller size film format and low price.


There's a story here, of course, and an adventure: Almost 2,500 miles of mountains and forests and desert and prairies. An indestructible 1957 International Travelall, with a dog named Blue in the back seat, pulling a trailer full of guitars, drums and amps, three down sleeping bags and hardly any luggage. Friendly folks along the way, and diners serving breakfast all day. 3mph on a rutted dirt road in granny low gear over the Continental Divide. And beer, lots of beer. 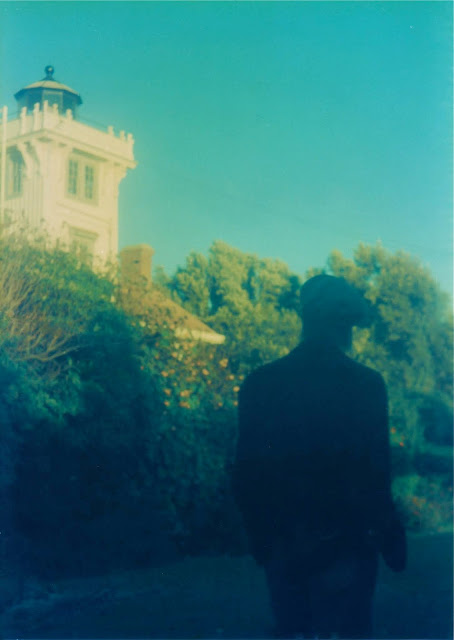 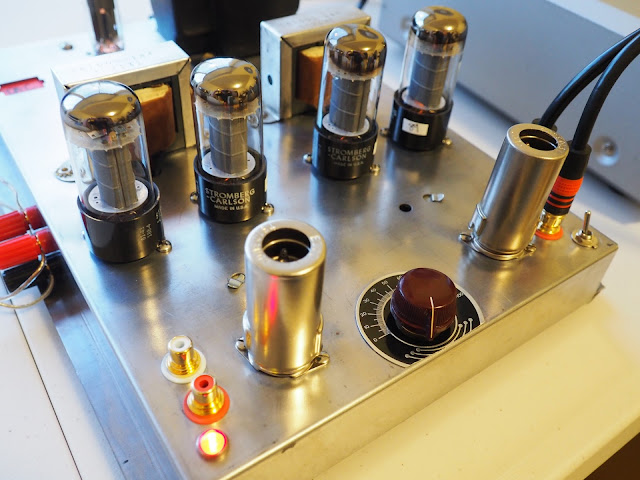 In Part 1 of this series of posts about a pair of early 1960s Stromberg-Carlson ASR-120 stereo tube power amplifiers being rebuilt / restored / re-imagined, we talked about the basic design of the amp, its circuit, and its origins. While I've been lazy doing other things, like building new literal fences and mending old figurative ones, and merely thinking about getting my tube amp running, friend David from Massachusetts has been busy actually getting his ASR-120 project done.

As you can see in the photo above, the resulting finished and rebuilt amplifier is a real beauty. Here's a couple of pictures showing the circuitry inside of his amp before: 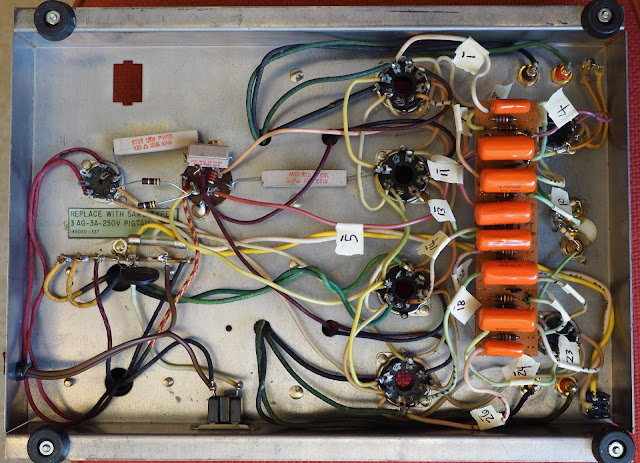 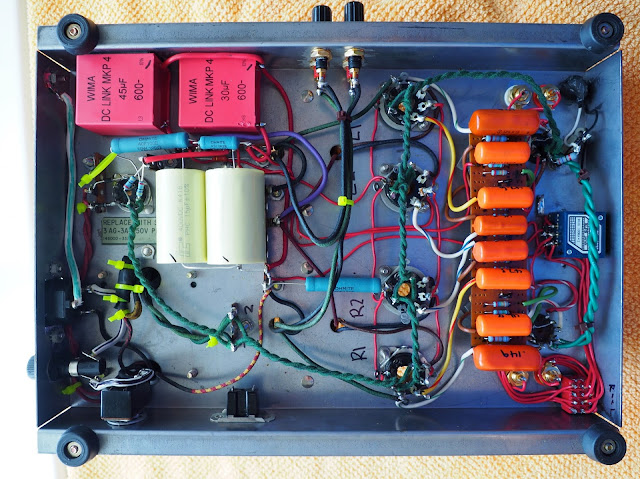 It's fairly obvious from looking at those two photos, that the amp has been almost completely rebuilt, with new components. I'll let David describe his process:

"I finished working on the ASR-120 late last night and ran some tests this afternoon. All is well, no exploding, no hum and it sounds very nice paired with the Minimus 7's. Some of the voltages are a bit high but that's probably a combination of the 120.5VAC from the wall and/or this specific 6CA4 tube.

The past two weeks have been spent obsessing about this amp and I've probably put 40 hours of thinking/labor into it during that time frame. In the end I decided to rebuild it entirely. All NOS sockets, a complete rewire and I repopulated the tag board with metal film/metal oxide resistors and Sprague 715P and 6PS polypropylene caps. Here's a partial list of some other mods/upgrades:

1) IEC socket and fuse holder on the rear; toggle power switch on the right side. Secondary AC outlet disconnected.
2) Rebuilt the filter section entirely.
3) Wired the heaters like in an old Fender, twisted and floating above the sockets.
4) Two 1N4007 diodes wired in series with the anodes of the 6CA4 rectifier to provide "soft fail" protection.
5) Two sets of RCA inputs - selectable via a mini toggle switch located on the front-right. Inputs were isolated and star grounded.
6) Speaker outputs moved from the top-front corners to the right side (the RCA inputs took their place).
7) 100K Alps stereo pot (excellent tracking and very quiet - it better be for $17!).
8) Bright white LED added off the 6.3V heaters (270 ohm 1W resistor, with a 1N4006 diode across the cathodes. The diode limits the LED's reverse voltage to 1.7v.)
9) Small red glass jewel for the power indicator (front-left). The LED wouldn't fit entirely inside the jewel so I pressed it in as far as I could and then covered the rear with black RTV gasket sealant.
10) I wasn't in love with the chicken head knob that was on the volume control, so I switched back over to my favorite maroon Davies round pointer.
11) Tube shields on the 7199s - why not, I had them in the parts bin.
12) I did take one bit of advice from Tom Bavis and replaced the two .01uF feedback caps with .15uF. Initially I wanted to wire some different value caps to a rotary switch before running it over to the board but in the end I thought it better to keep those wires short. 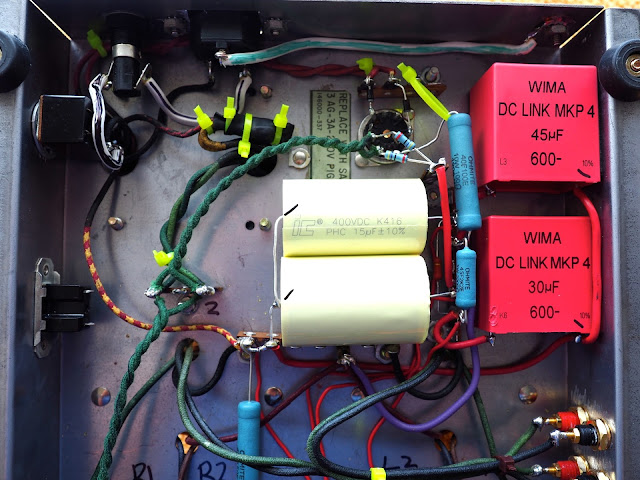 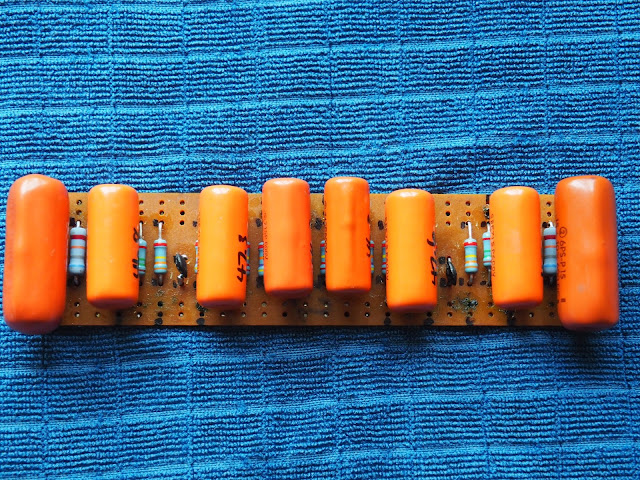 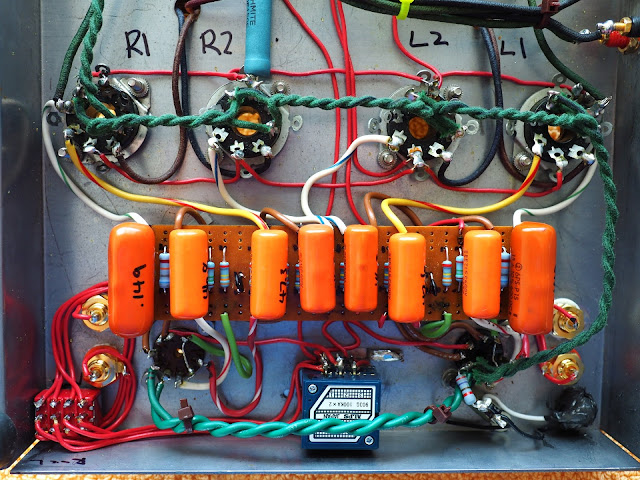 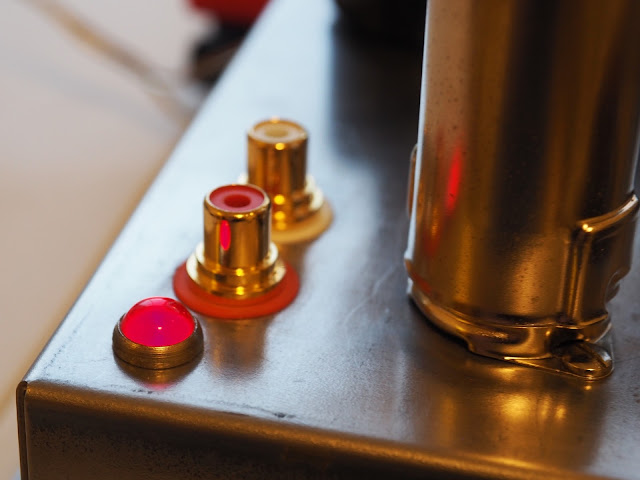 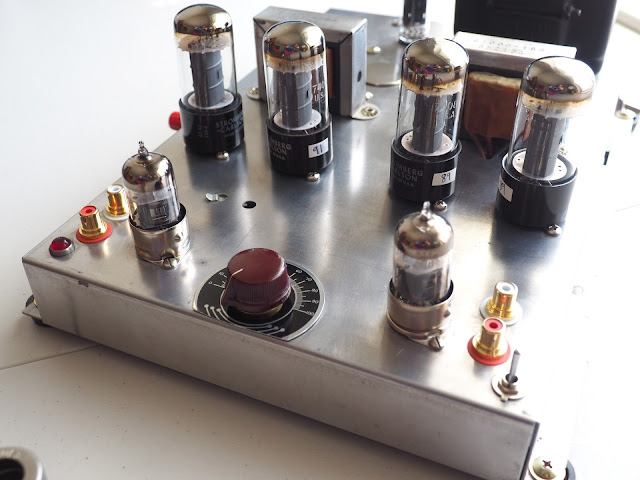 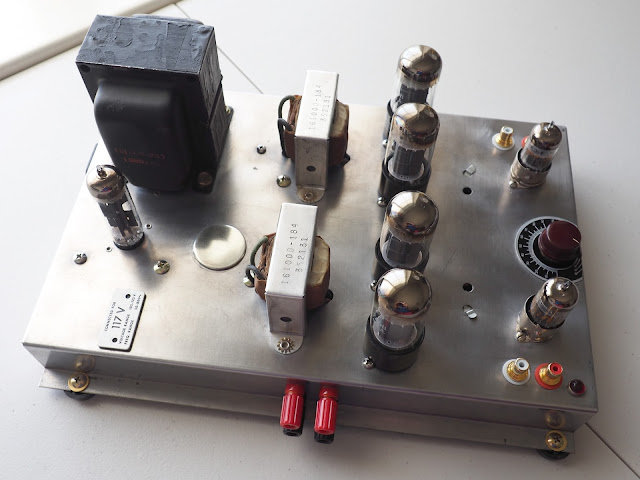 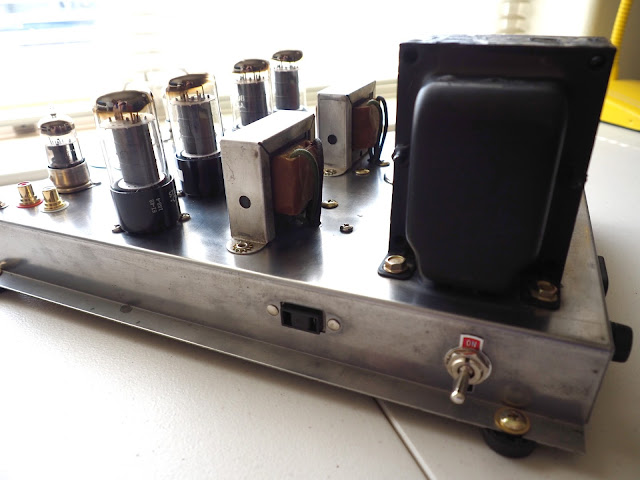 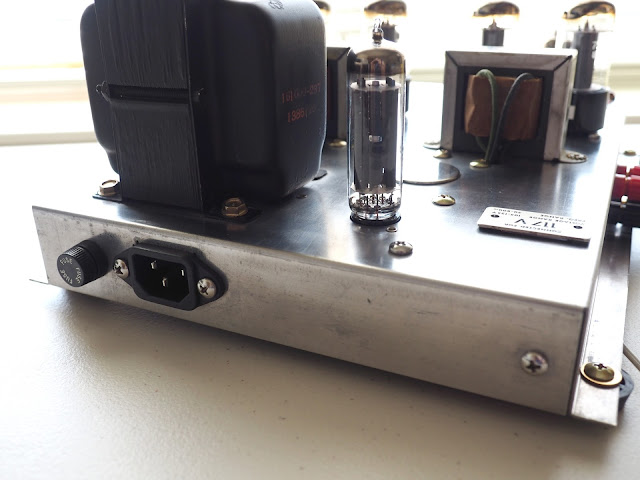 Here are a couple overhead shots of the chassis, before: 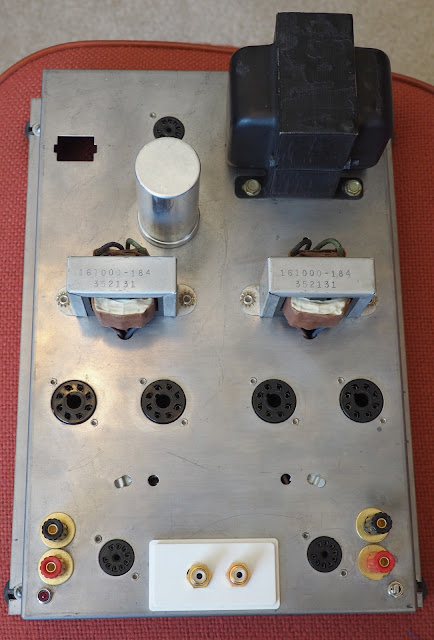 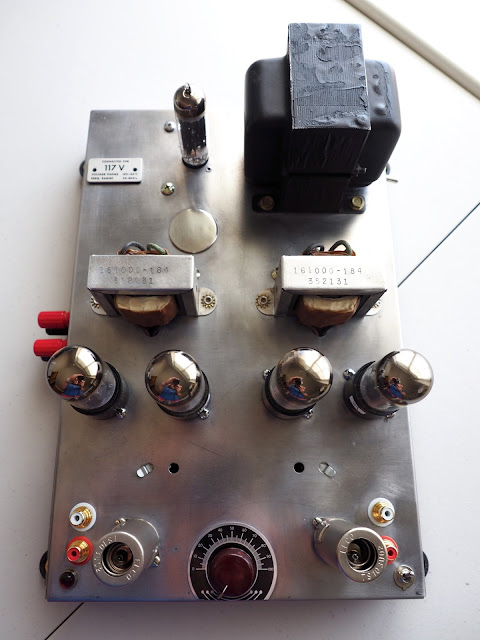 And finally, a JPEG of the voltage measurements taken at 120.5VAC from the wall, 117VAC from my variac, and also the voltages listed on the schematic (at 117V)":

And how does it sound?

"I've had the ASR-120 in the main system for the past week. I'm actually listening to it as I type. The bass mix using the .15uF feedback caps sounds fine and is actually more "punchy" than I thought it would be (given the 8" full range Stephens Trusonics in the main cabinets). The treble is more present than what usually comes from the Pioneer, but I'm not complaining, drums sound clearer and more well defined. Plus, I've been able to hear some pick strumming where I've never noticed it before. I'm not sure if the difference is due to the amp or the recently rebuilt super tweeters. Probably a mix of both. Anyway, the amp is dead quiet on start up, even with the volume pot maxed out. I'm happy with the results but it's strange to not be able to "hear" whether or not a tube amp is on."

Thanks to David for the pictures and description, and really nice work!

Next time, in Part 3, we'll take a look at the other Stromberg-Carlson ASR-120 amplifier, my own project, and find out how much I can mess it up, and still manage to get it to operate okay.