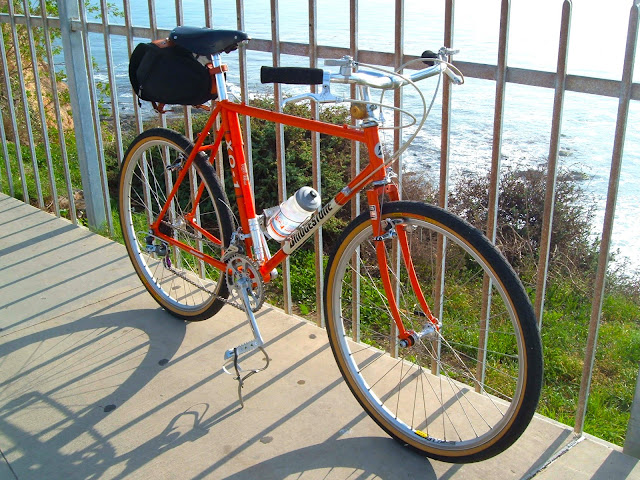 Here's a special treat, another beautiful bike build from my younger, smarter brother, Jonsan. In an earlier guest blogpost from him, about his then- latest project, a Gazelle "Crossframe" cyclocross bicycle, I wrote this:

"My brother Jonsan has always had some cool and interesting bicycles, including the very first fixed gear bike I'd ever seen, a mid-80s Schwinn Madison (which now lives in my garage, and sometimes roams the streets of Eugene). He'll find a rare and/or beautiful frame and then build it up with top quality components, and every once in a while he sends me photos of his incredible creations." And now, without further ado, here, in his own words, is Jonsan:

For approximately a decade I have been wanting to find a 1993 Bridgestone XO-1. Among its unique features was a frame built with standard road tubing but sized for 26” wheels and the very unique moustache handlebar. While it originally came with 1.25” (32mm) tires which were considered wide-ish for the day it had clearance for much wider tires, a precursor to how the now popular “gravel” bikes are equipped. According the the 1993 Bridgestone catalog, only 1000 were made and my understanding is that they weren’t too popular and lots were leftover when they were discontinued the following year. I had a 1992 model which had similar specs but different colors for the frame and sidepull brakes but the 1993 which had an orange ("Construction Pumpkin” in the catalog) frame and cantilever brakes is the most desirable one to own. 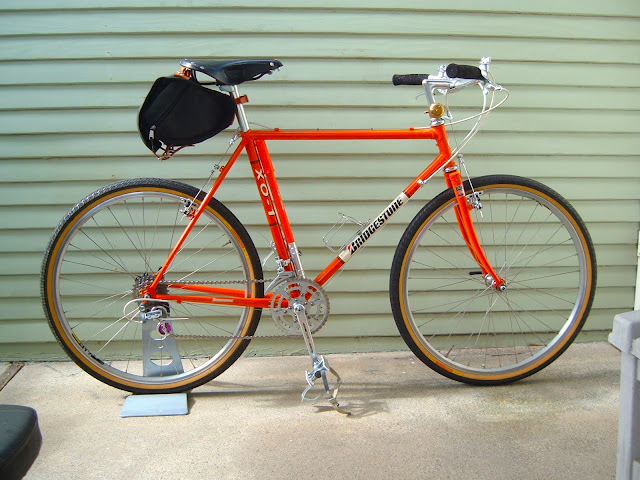 I found this in the local craigslist as a frameset only. It was in very nice shape for a frame that is close to 30 years old, so it appears to have not been ridden much. The gentleman who sold it is a big Bridgestone XO and Rivendell fan. He bought it knowing he was too tall for it hoping to trade it for a larger frame which didn’t materialize so he decided to sell. It wasn’t cheap (don’t ask) but it was priced several hundred dollars less than complete bikes go for, which is $$ saved for me as I had a specific build I wanted to do that didn’t include any of the original parts anyway.All of the parts were already on hand to assemble the bike so no trips to the local bike shop or online purchases were necessary. The bottom bracket wasn’t the right length for the crankset I used and when I removed it the whole works were covered in metal shavings. I could still see paint on the outside edges of the bottom bracket shell so presumably the frame was prepped at the factory and then painted without cleaning up the mess beforehand! The headset felt a bit gritty to me so I disassembled it to regrease and adjust, and it was similarly full of shavings. Except for the headset cups (I did replace the bearings and their captive holders as I was too lazy to soak and clean the shaving encrusted moving bits) no other component is original to the bike. 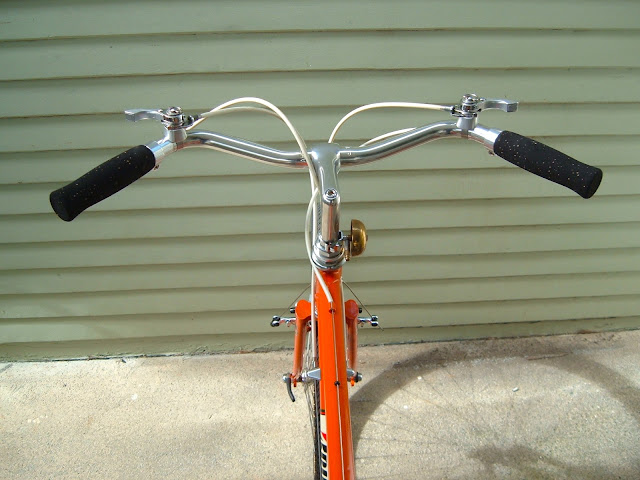 The bars and stem are set up for an in-between riding position, not leaning too forward or too upright, which I think suits the bike well. It climbs and accelerates good but not great, partly due to how my body is positioned and the rather pedestrian tires it is currently shod with. It does have a great ride quality and I love the way it looks, so I'm sure it'll be one of the last bikes I would ever part with. 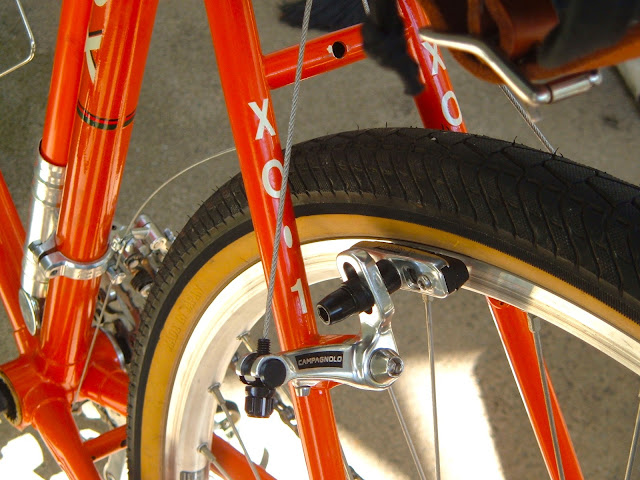 Here's a build component list for those interested. I may make some changes along the way but I am in no rush to do so. Ignore the long-ish cable ends hanging out - I usually go for several rides to make sure everything is adjusted properly before I trim and attach the end cap thingies:• Panaracer Pasela 26x1.75 (42mm) tires• NOS Suntour XC Pro hubs laced with Sapim butted spokes to Mavic 317 rims by Ryan Mason of Mason Cyclewerks who sadly (for me) moved from Long Beach to northern Cal so I gotta find another wheel builder.• Nitto "Young" (I think) stem• Ahearne/MAP handlebars, made and sold by Joseph Ahearne and Mitch Pryor, a couple of custom frame builders. Pretty much a copy of the Cinelli "Priest" bars but with a 25.4 clamp diameter and a 22.2mm grip diameter and quite a bit heavier too. Also similar to the Nitto 2522 “Jitensha” handlebar except for a 1” rise instead of being flat.• Velo Orange cork/rubber grips• Real Design brake levers• Suntour LD-2800 thumb shifters• American Classic 27.0mm seatpost• Brooks B17 saddle• Campagnolo cantilever brakes - OK, these are actually made by Tektro presumably in Taiwan but I like ‘em and they are way easier to adjust than the older post style cantis • TA Cyclotouriste crankset, 42/32 chainrings• MKS touring lite pedals with MKS alloy toe clips• Sachs 13-26 7 speed freewheel• Suntour ARX front derailleur• Suntour Sprint 9000 rear derailleur with Bullseye pulleys• Nitto touring bottle cage• Silca framefit pump

• Acorn M/L saddlebag - Acorn bags are made here locally in Gardena by a husband and wife team who makes a batch of bags each month and posts them for sale on their website and sell out in a few minutes. My saddlebag fetish is due to influence from my older brother; all of my bikes have a bag, each with a Tarik Saleh Bike Club button attached. There are 2 club rules: "Ride bikes" and "Try not to be an ass": 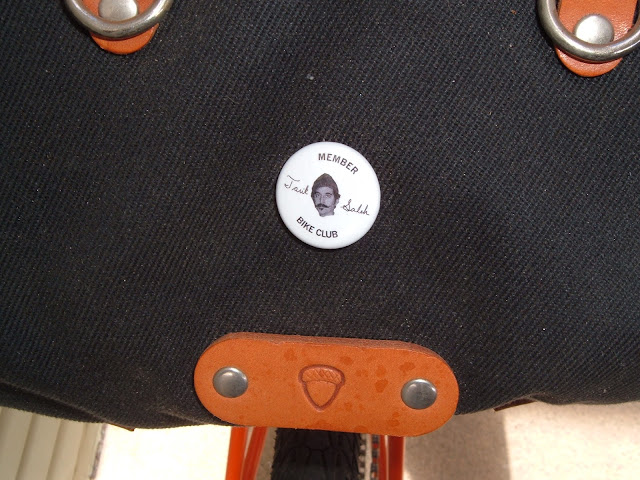 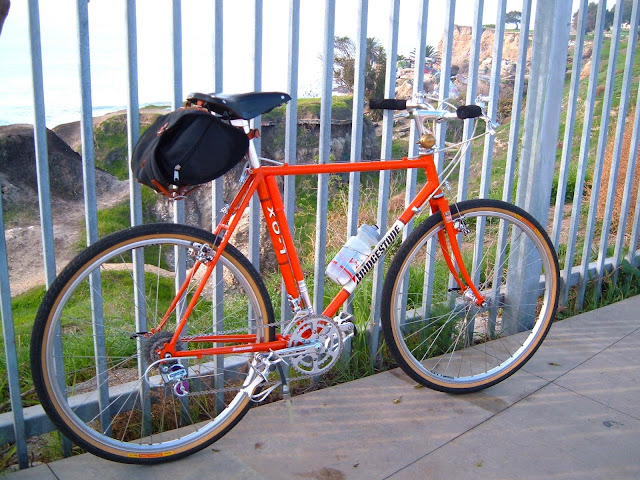 *                    *                    *
Editor's note: Another classic bicycle from the 1990s that had a similar design ethic and geometry as the Bridgestone X0-1 was the economy level B-Stone CB-0.
The first and last photos above of Jonsan's XO-1 show it parked at the edge of the known world - at the sudden, cut-off southern end of Pacific Ave in San Pedro, where the rest of the street had fallen down the cliff towards the Pacific Ocean in the semi-major earthquake of 1933.
Beyond the fence is an area that's always been known since the quake by San Pedrans, unofficially, as the "Sunken City". As late as the 1970s there were still recognizable remnants of the houses and shops that once lined that scenic seaside drive, but those ruins, now almost a century old, have become less visible as the years pass by and the soft sandstone cliff continues to crumble slowly into the sea.
Posted by James Aoyama on 1:20:00 PM

The wheel set though

Thanks for reading! To answer your anonymous non- question, the details are already in the blog post: Suntour XC Pro hubs, Sapim spokes, and Mavic 317 rims.