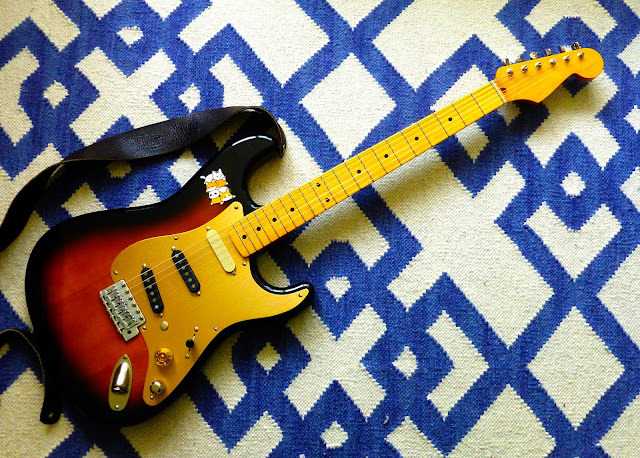 This Parts-O-Caster project was started about seven years ago when I bought a 1991 MIM Strat from friend David, who had saved it from an early death and then completely rebuilt. It was a fine playing and great sounding Stratocaster, but I couldn't resist messing with it, and over time, bit by bit, every component has been replaced. A few weeks ago the really nicely set up and slim '91 rosewood fingerboard neck was taken off and a new girthy Allparts one piece maple neck took its place. It feels like a done project at this point since I've totally messed it up and there isn't one part left of that original Strat, and there probably aren't any foreseeable changes in the near future.

If you're wondering about some of the unusual parts choices, I'll just say I've never been a fan of the typical "thin" Strat tone, and the resultant sum-total sound of this odd combination of components is anything but thin and zingy. In fact, even the in-between switch settings have no trace of "quack" factor.

There's still some stuff needing doing, such as a fret level and recrown, and eventually replacing the nut, which is currently an experimental zero-fret conversion thing which we as lab mice have the privilege of paying for. Besides that, the Partsocaster sounds as great as it always has, and I'm really enjoying squeezing notes out of the hefty "V" neck. One former issue, a tendency for notes played on the high E string to be slightly dull sounding, has gone away with the addition of the one-piece maple neck. I always wondered - was it the bridge or the neck that was causing that? Now I know.

Since the vintage-spec Allparts neck has the truss rod nut mounted at the heel of the neck, I put a notch in the body to make any adjustments a bit easier. This mod works best with a Telecaster with a body-mounted neck pickup - all you have to do is remove the pickguard, and the adjuster nut is easily accessible. On a Strat, with all three pickups mounted on the 'guard, it's not so convenient - the real reason I added the notch was so the guitar could be strung up and played for a week or so, without pickguard, until the brand new neck had settled in place, and then adjust as needed before replacing the 'guard.

First, some cuts with a fine tooth hobby saw: 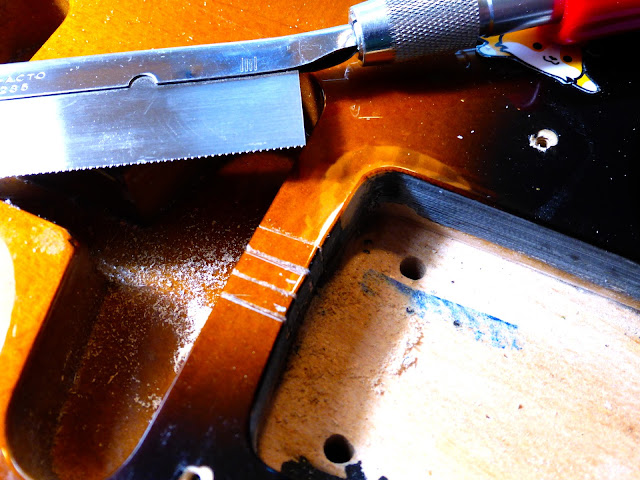 Next, knocking out wood between the cuts: 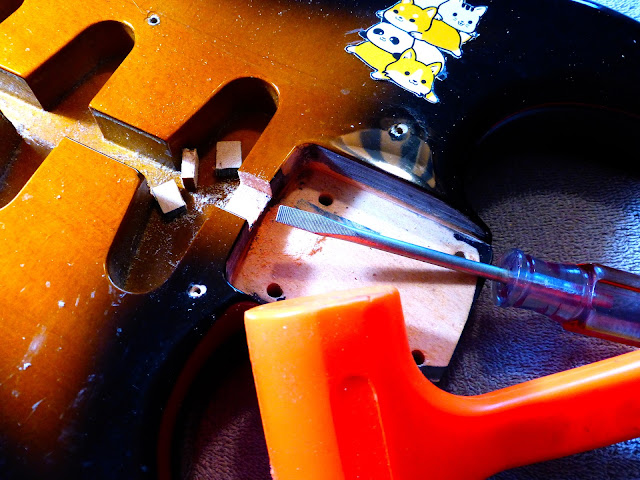 The resultant notch is a bit rough looking. If this was done for someone else, I would have cleaned it up nice and purty, but it's my guitar and I don't care if I want to: 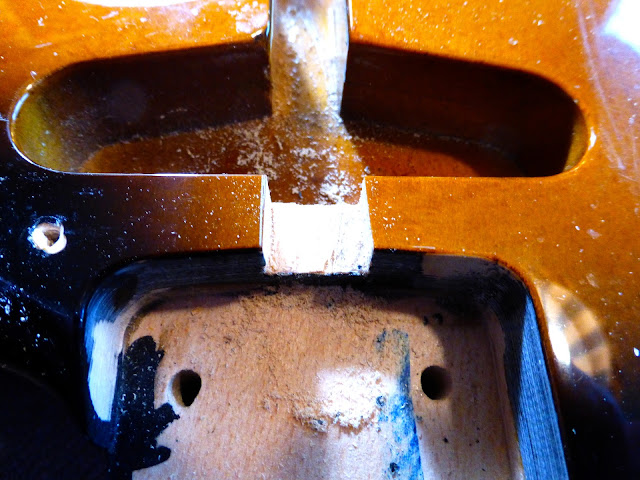 Now it's easy to get a screwdriver in there: 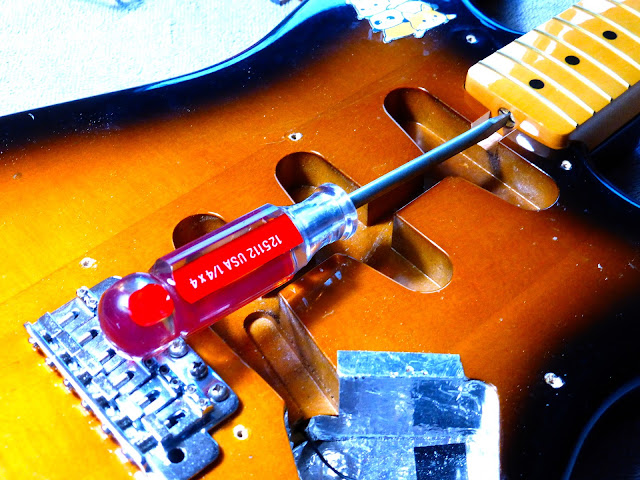 Or a StewMac truss crank: 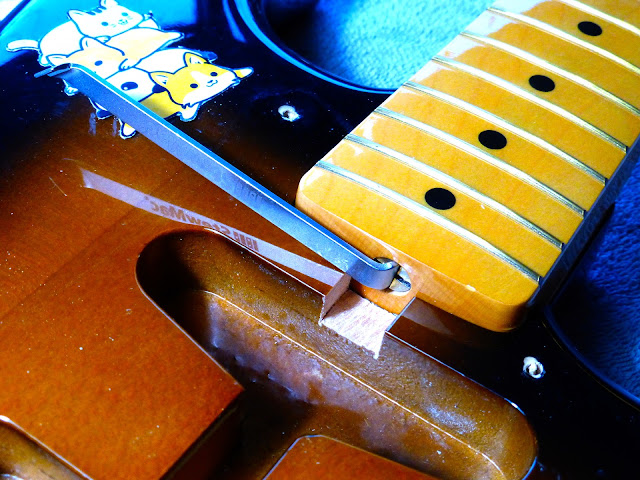 Next is a shot taken just after the mounting holes had been drilled into the heel of the new Allparts neck. With a drill guide, getting the holes drilled nice and perpendicular was easy. For a mounting screw hole pattern I used the the traditional Fender factory specification, which also says that all necks should have the holes in the same locations - that simplifies mating of neck to body, and allows for easier neck substitutions, often not possible with the modern revisionist custom hole drilling. Warmoth also uses the old style neck mount hole placement on their necks. 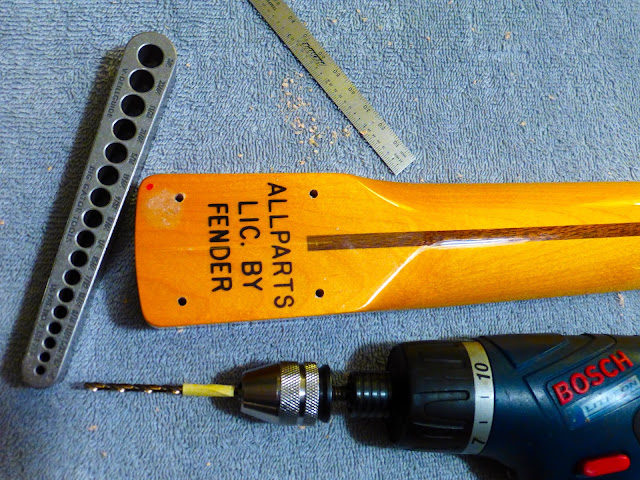 Placing the mounting screws, well lubricated with old fashioned Kirk's Castile Soap, through the neck plate and then through the four holes in the body's neck pocket, there was no "seeking" or uncertainty. All four screws (many of you call them "bolts", but screws they are) went quickly and precisely into their respective pilot holes in the neck heel, and tightening was a breeze.

With the neck attached, here's what it looks like with the pickguard placed back down: 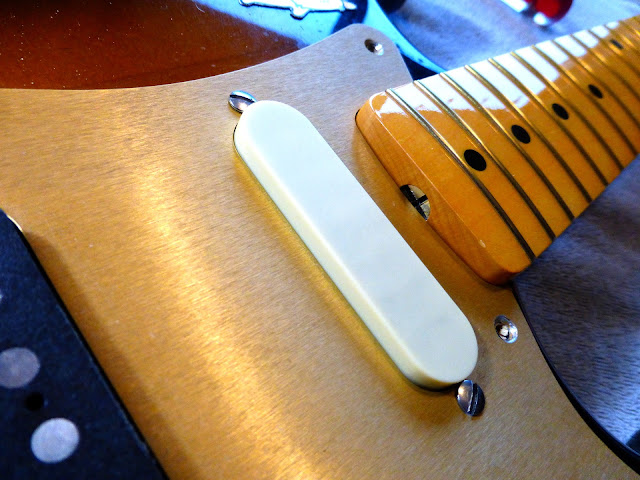 As you can see, the truss rod nut is just barely not accessible; many older Fenders had a semi-circular notch cut out of the pickguard to allow a screwdriver to get in there, and I'm thinking I'll do the same eventually. That all depends on how much this neck does the seasonal warp thing, and somehow I have a feeling it won't move much, it's a fairly hefty chunk of maple.

A comparatively rare neck plate, found only on certain Japanese production Fenders, and on no USA or Mexico models:

The Strat after mounting the new Allparts neck: 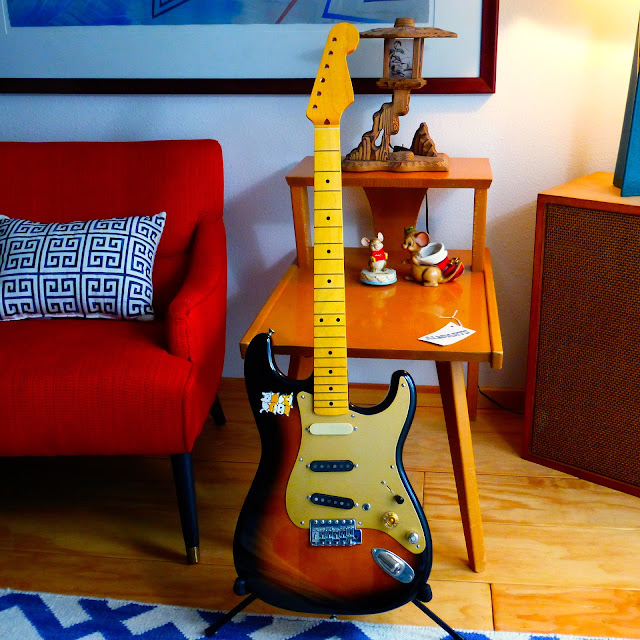 Except for some minor fret work, this guitar is done, and it's time to focus on building up a big-neck Telecaster project. Most of the parts for that have been collected, including a precision cut knotty pine body from ToneBomb in Calgary Alberta, and another FugiGen Allparts neck, this time an unfinished one to match the body. If I don't end up totally messing that project up, there will be photos and misc ramblings posted here at Origami Night Lamp. Or who knows, I might just document the disaster.

Here are links to previous posts about this Parts-O-Caster project: Turn around and smile

As I'm up on two hind legs

How to Be a Bass Player 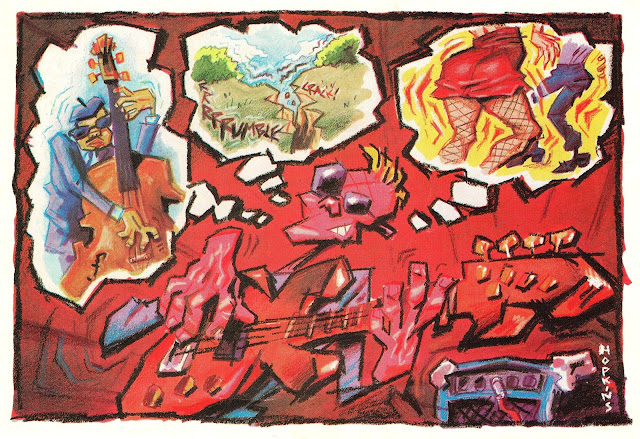 The above illustration by a genius artist named Hopkins, clipped out of an old issue of Musician magazine, has been inside my bass case, underneath either a 1962 Precision or a '61 Danelectro, for a long time now. Every time I see it, unpacking before a gig or a jam, it makes me smile. It's a three-second bass lesson, an inspiration and affirmation, and a quick reminder of what's important no matter what kind of music you play: who you are, why you're there, what it is that you want to happen.

1) Jazz. Ron Carter, Charlie Hayden, Charles Mingus, Scott LaFaro... Listen to jazz combos, especially trios - the bass not only holds the root down through the changes, but sets the mood and direction of both the song, and the band. A well played bass line is the living breathing bridge between the rhythmic (Yang) and the melodious (Yin).

2) A quake, a seismic deep rumbling disturbance, a rift opening upon the earth's crust. It's the groove, man: deep, wide and pulsating-- dance as close as you can on the edge without falling in. It's within the power of your fingers to excite the rhythmic beast and bring down the house, or lay back and float after the eruption, on a mellow stream of cool vibrations.

3) Shake that booty. What else needs to be said? Shake it baby, shake it all night long. 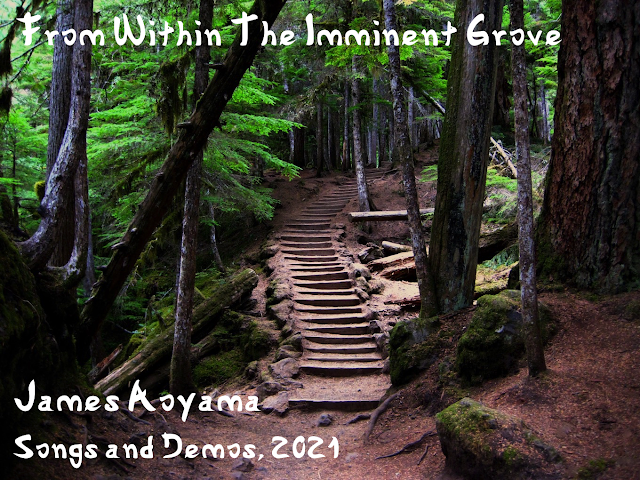 Sakura Falling Onto Snow was little more than a sketch of a song last March, and none of its previously recorded demo tracks were kept. Since then the key has risen two steps and the melody evolved, the tempo slowed a few bpm and new words written, and gradually a somewhat different song emerged from what was once a string of Haikus held together by a guitar pretending to be a Koto.