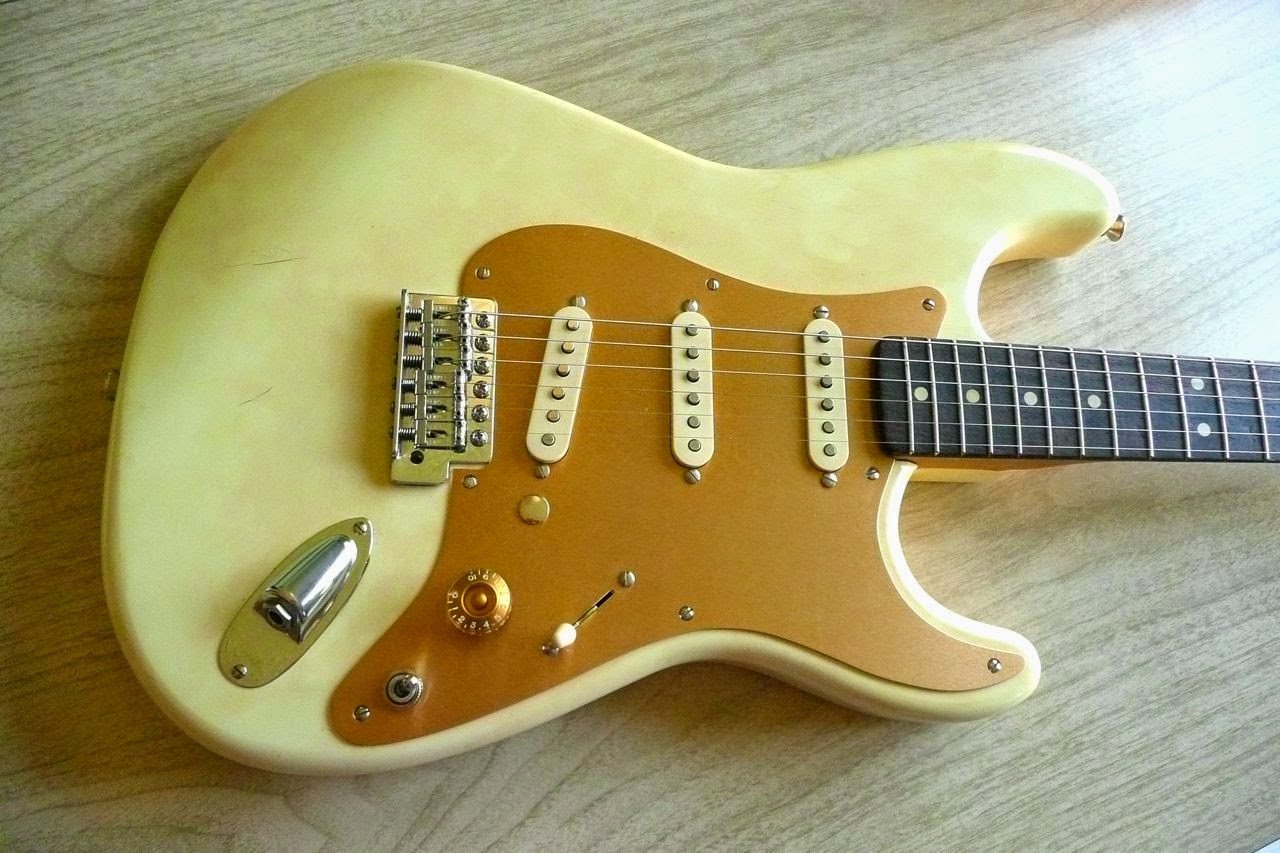 Part 1 of this series of posts about a 1991 Stratocaster told the tale of its life in the years before I acquired it, how it had been completely painted over by someone - body, pickguard, neck, fingerboard and tuners, everything, with white latex house paint - and then was rescued and brought back to life and playability by the next two owners. By the time I bought it from friend David, it was once again in great shape - looked nice, sounded as good as any Strat out there, and thanks to David's setup and fret work, played like a dream. However, it's in my nature to change things to suit myself, and soon after getting this '91 MIM (= Made In Mexico) Strat, I started to mod it. The first thing I did was to swap out the tuners for Gotoh vintage Kluson-style machines, and the next was to alter how the body looked.

Along with that rather strange 'art' treatment, this guitar had also been played a good amount, and over the years the finish on the neck has acquired a fairly nice patina. The maple has become darker, and there are some noticeable wear spots; overall, the neck has a pleasing, naturally worn look to it. However, the body's original finish is some sort of incredibly thick, hard paint that must have been developed to resist aging and wear. Besides a few scratches, it was still a light shade of a creamy white-ish color, which may or may not be Olympic White, also known as Beach Boys White. In any case, there was a bit of an aesthetic disconnect between the newish looking body and the darker aged neck, as if they had come from two different guitars. What to do? It was time to artificially age the finish, if I possibly could.

The first thing I did was to remove the pickguard and hardware, and lay the bare body out in the summer sun for a week; this accomplished nothing. Last year, I bought a new Mitey Mite one-piece maple Tele neck, whitish pale as the grave, and had some success wiping it down with brown shoe polish, giving that neck a nice golden tan color: 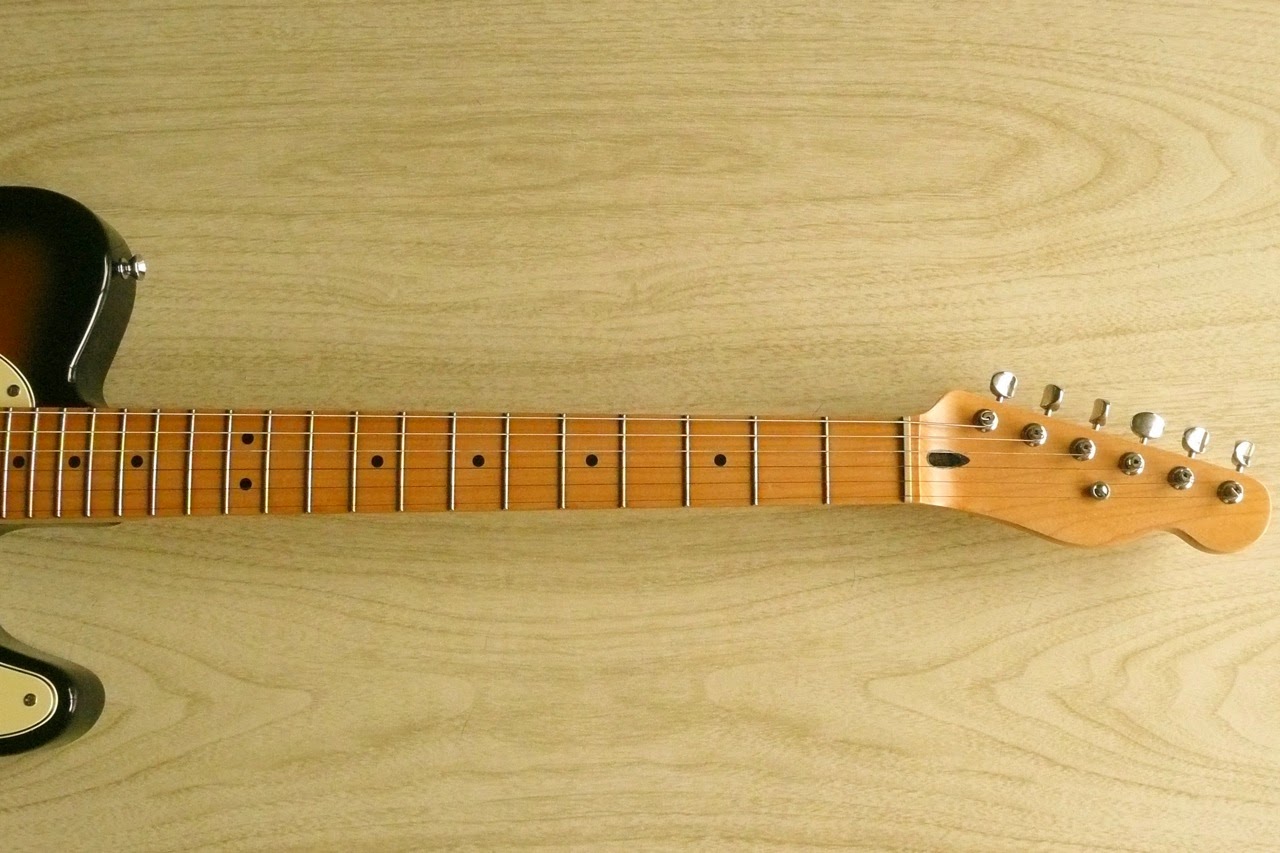 That treatment worked well for that Partsocaster Tele neck, so I applied the same polish to this Strat body. The resulting splotchy, goopy looking color looked fantastic - see the picture at the top of this post, and this next photo with the Allparts mint-colored pickguard and Squier Classic Vibe pickups that David had installed during his time with this Strat: 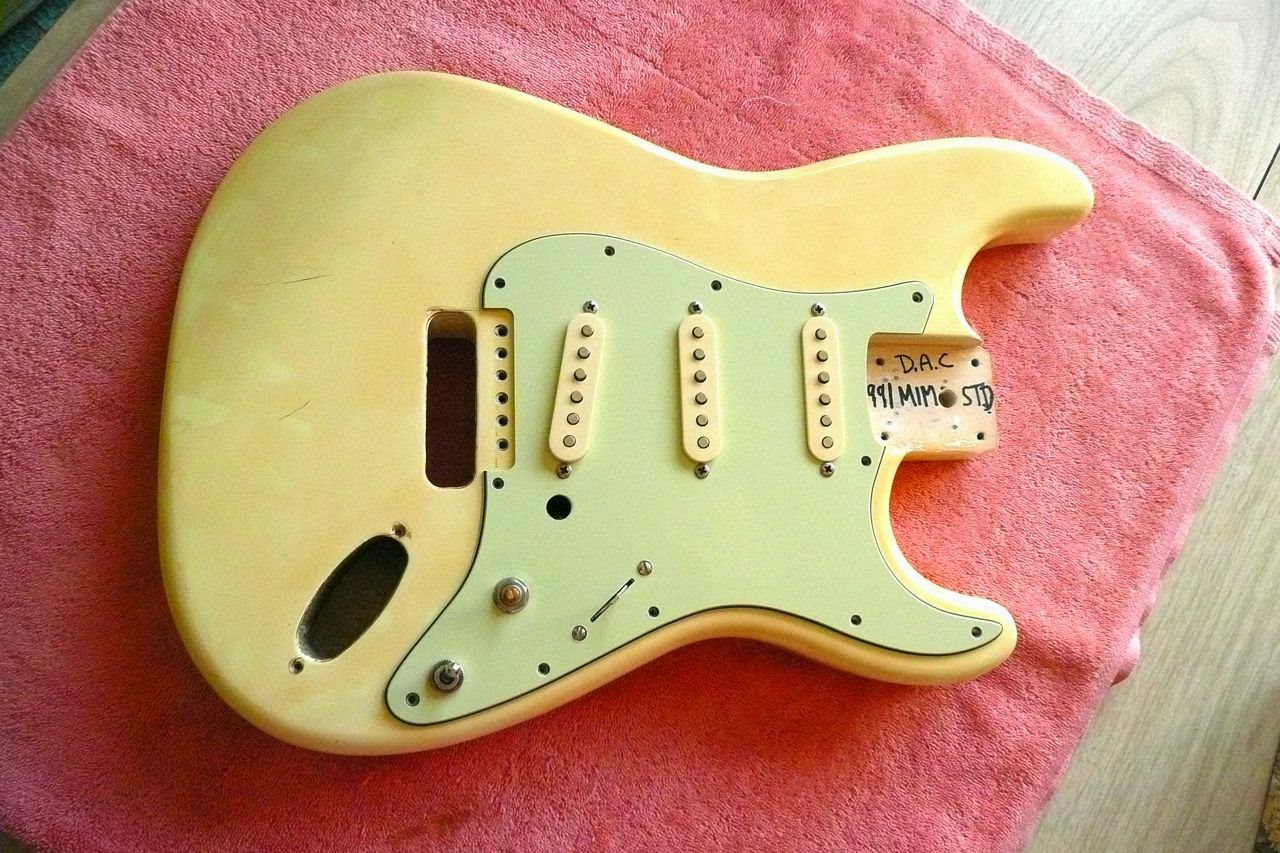 Wow wow wow, I thought it looked great, and quickly assembled the guitar, started playing it, and assumed I was done with the visual side of the mod process. I was wrong. Within a week, the added color started fading, and by the end of two weeks it looked exactly as it did before the application of the brown shoe polish, with the exception that some of the polish remained inside the deeper scratches and highlighted them. I disassembled the Strat and tried again; this time there was some darkening of the finish, but not as much as before, and by the time three days had passed, it had lightened up again. Arrgh.

Okay - one more try, and this time I applied the polish in the hot sun, and left it on for over a week, instead of just a few minutes. When I took an old rag and wiped the shoe polish off, there was barely any golden color, and that faded within a day. From all this, I have to assume three things: A) the ultra thick original paint job on this Strat just sucked up and absorbed any applied dye, B) any color change that the polish had on the finish had less effect with each subsequent application, and C) this particular factory paint is some kind of White Zombie color that won't die, no matter how much you try to kill it.

Yeah, it's disappointing, it did look great for a while, but for the time being I'm living with the current white finish, which I'm planning on either repainting or doing some kind of top coat on, in the warm spring of next year. In reality, it's not a bad color, and looks pretty cool along with the gold anodized aluminum pickguard: 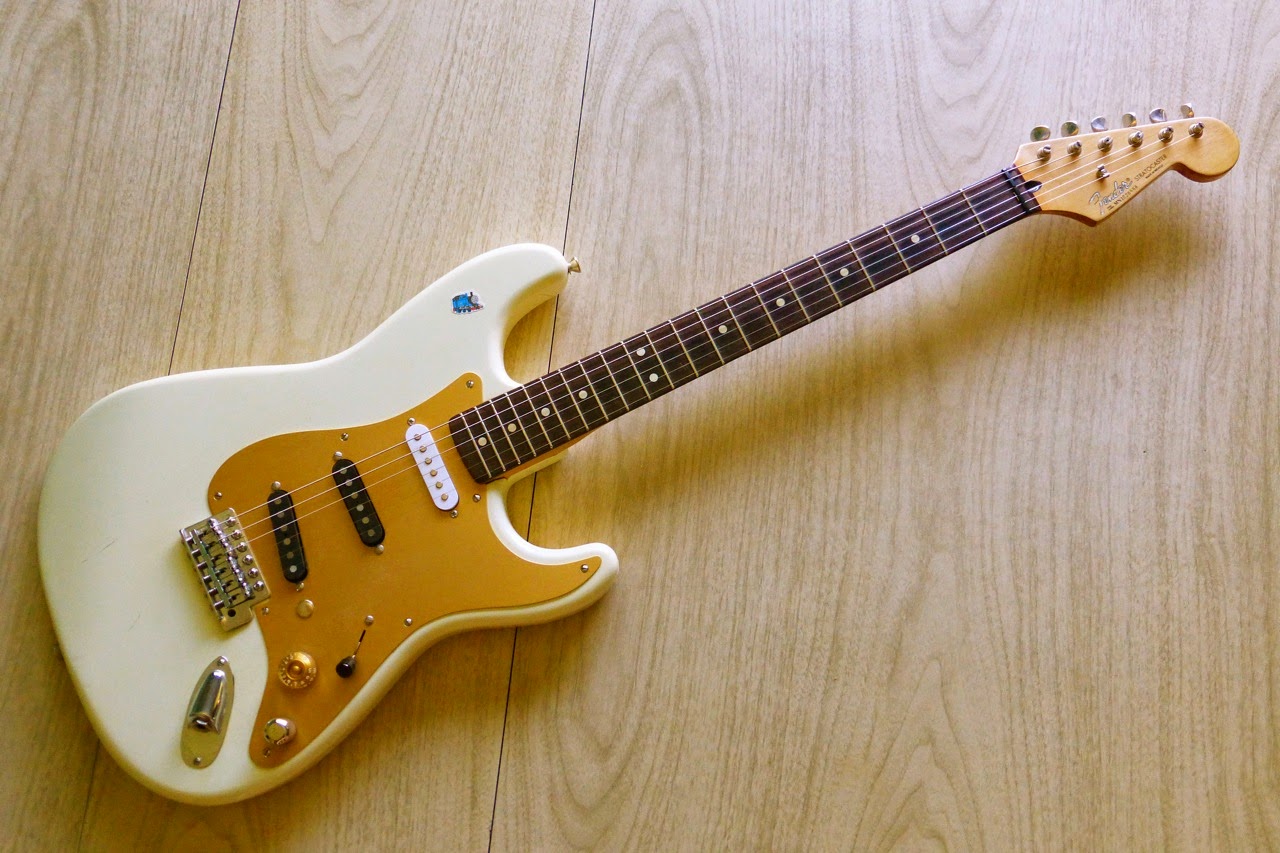 And besides, I didn't really buy this Strat in order to spend all my time messing with it. I got it to play it, as a daily driver, and I do - it's my go-to electric, never in its case unless there's a jam going on somewhere. And, as I mentioned earlier, it does play like a dream come true.

Next time, in Part 3, we're moving on to pickups, switches, wiring, and more - stay tuned. Also, in Part 1, we can see a vintage style tuning machine retro-fit on this Strat.

Click or tap on any picture above for larger, higher def images.  All photos taken with a Lumix TZ-3.