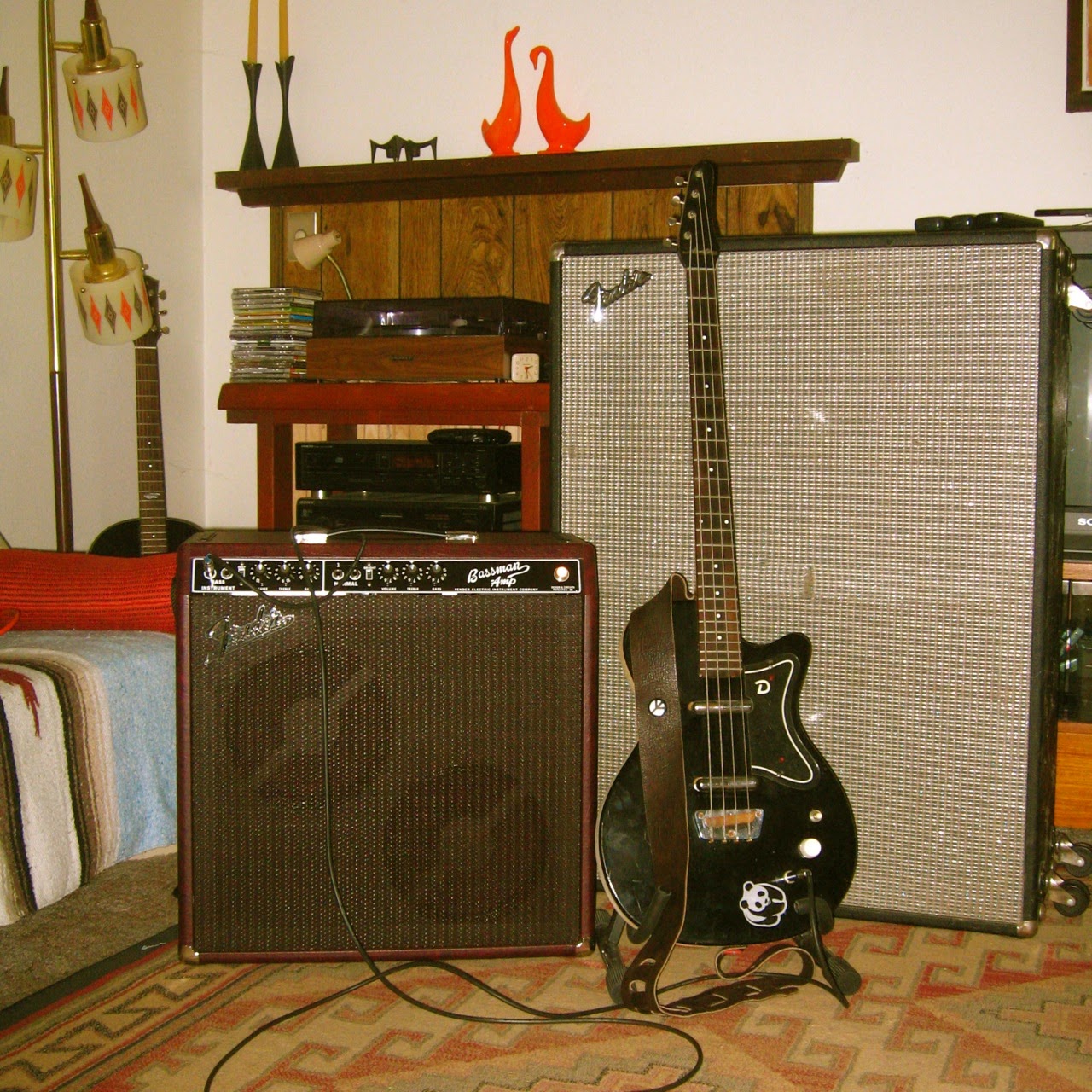 My all time favorite, great sounding electric bass set up:

•  The electric bass is an early '60s (I think) Silvertone, made by Danelectro in New Jersey and sold by Chicago's Sears Roebuck department and mail order catalog stores. At the time, these unusually built semi-hollow bodied instruments with their distinctive sounding lipstick pickups sold for something like $50, and amazingly, they are some of the greatest sounding and finest playing basses ever made. It seems like I've had this forever; a bunch of other nice basses have come and gone since then, and now it's the only one I own, don't need another.

•  A 50 watt Fender Bassman Amp head, installed in a JD Newell 2x10 combo cab. This amp also has two Eminence Ragin Cajun 10" speakers in it, along with a couple Ted Weber Beam Blockers. By itself, this is one of the sweetest sounding amps ever, great for both guitar and bass. Bypass the internal speakers and plug up to an efficient bass cab, and be amazed by how loud (and good) fifty tube watts of thumping low end power can really be. This amp belongs to friend David, who went through the whole circuit and meticulously rebuilt it.

•  That's my late '60s Fender Bassman 2x15 cabinet, with a couple of factory installed JBL D140F 15" speakers in it. I've owned it for longer than I care to admit, I've tried to kill it with abuse and overuse and it shows, but it continues to be a seriously great sounding, and loud, bass cab. Anyone who says these cabs don't sound good have never owned one, never played through one, probably never seen or heard one in person, and like most people who just repeat what they've heard, don't know what the heck they're talking about. * See update below *

•  And finally, in this picture is a really old Pro Co cable, made with Belden wire and Switchcraft plugs, but I usually just use whatever comes to hand. My favorites are the '80s Bill Lawrence cables with the screw-on solderless machined brass plugs; yeah, they're very well made and do the job better than most, but the real reason I like them is that they look cool.

And yes, this pile of old junk vintage stuff sounds every bit as good as you might think it does: fat lows, natural tube compression, smooth highs. It doesn't get insanely loud, but for most American roots music styles it's more than enough, even playing with a good solid hitting drummer. Want louder? Simple: stick an SM57 in front of the speaker, and be happy.

* Update: A bass player in Idaho contacted me with his experience with a very similar model Fender Bassman cabinet. He had read on an internet forum that "those JBL warrant no good for bass", so he sold them on eBay, then reloaded the cab with a pair of car stereo subwoofers he found on craigslist. After plugging in his brand new Rogue bass with DiMarzio Super Distortion pickups, through a Hartke transistor amp, he reports that "this Fender cabenit sounds like ****ing dog****, and now everybody in my Sunday Worship Band hate me." Okay! Thanks to reader "L.D.S." in Pocatello, for getting in touch.