The Best Darn Pedals Ever 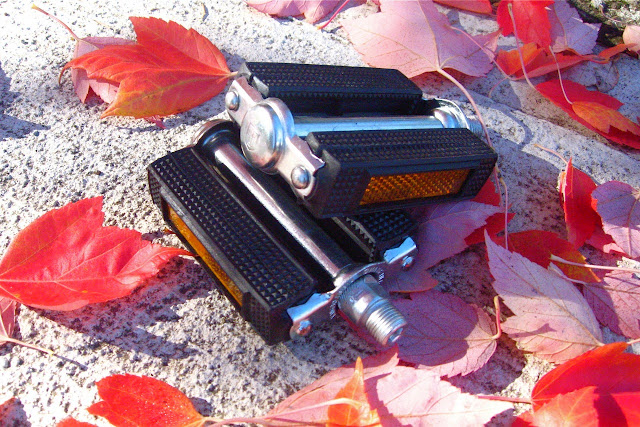 These are the greatest pedals ever, but something of a mystery. The local bike shop, Paul's on Alder St, had a few pairs of these sitting on a shelf gathering dust - I don't think they sell very many of them. Don't even know if they're still in production, and it's hard to tell what brand they actually are - there's no name on them. It says "Made In Germany" on the inside flange, along with a logo that may or may not have a letter "U" in it.

They're called rubber block pedals but the blocks are probably made of a fairly soft rubber-ish plastic. In any case, they have an amazing grip; once you plant your foot on one of the pedals, it stays there without any slippage. The bearings have almost zero play, and incredibly, almost zero friction - they spin smoother than even those great Japanese MKS pedals. They don't appear to be rebuildable, but a couple squirts of Phil's Tenacious oil once a year or so should keep them happy for a long time. We've been using them on most of our bikes here for over five years, and they're awesome and trouble free in any weather, as well as being ultra, ultra comfortable.

What's not to like? Well, you can't attach toe clips, so they're not as secure as you'd need for a fixed gear, but as they're the first to admit, fixie people are a bunch of crazies and who can tell what they'd like anyway? (Full disclosure notice: I have two fixed gear bikes, and ride them) Also, you'll have to not mind so much when, inevitably, the Bicycle Fashion Police walk up and say in their endearing way, "Whoa! Cute pedals! Where are your training wheels?" But who cares - ignore those assho people, and ride luxuriously in almost any shoe, whether high top sneakers, flats, Doc Ms, steel toed stompers, Daisy Duck pumps, high-heeled cowgirl boots, or wing tips. Zip on down to the coffee shop on a warm spring morning in your flip-flops, or heck, go bare foot - why not?

I'm not even going to get started about anyone saying "OMG, but you're not even connected to the pedals!" If you don't mind cycling in shoes you can't walk in, or if you believe you get some kind of 'performance edge' from using special pedals, hey, that's between you and your own personal bicycling god. All I know is that these rubber pedals get the job done, and look ultra retro and ultra cool doing it. Whatever they are.