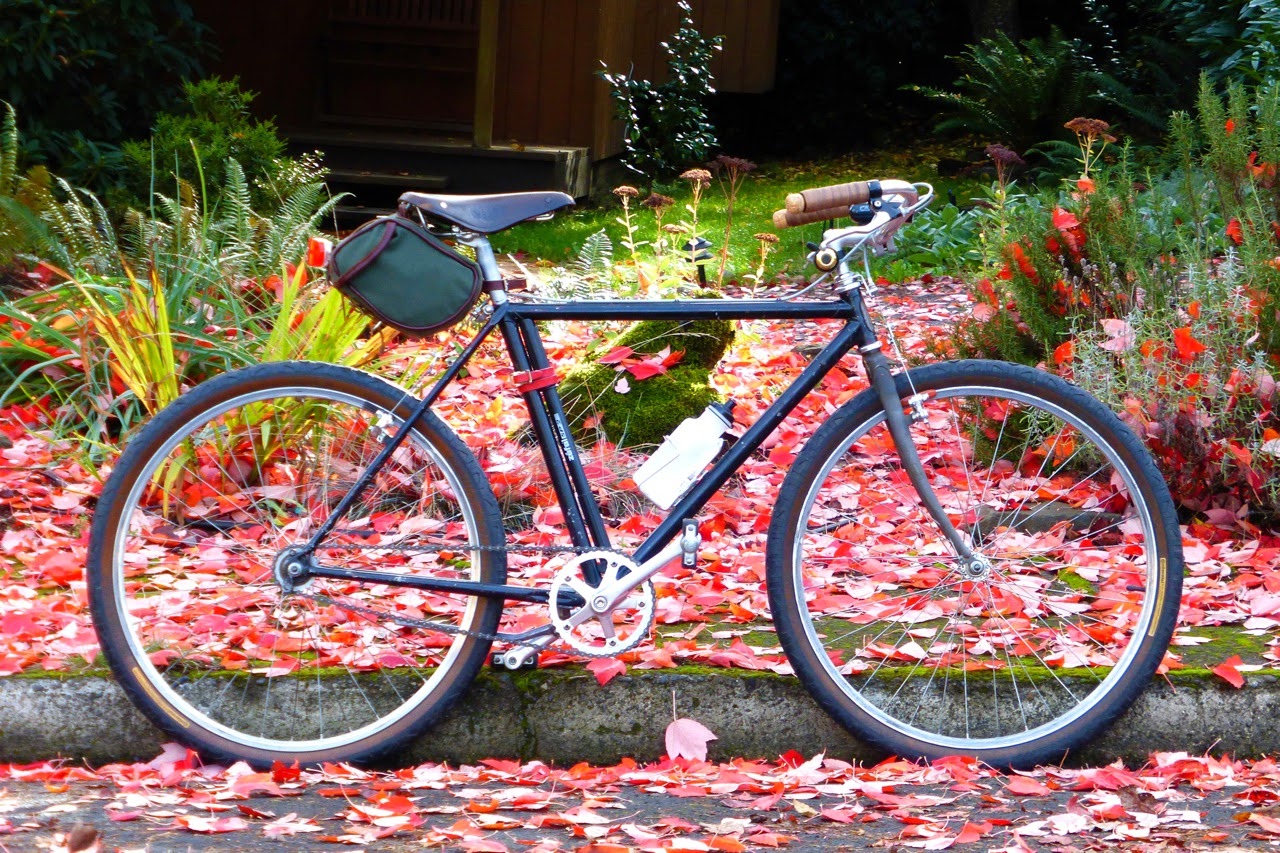 No matter how many nice bicycles you may have, it's a good idea to have at least one really ugly bike. It's great to be able to jump on and go without having to worry about your fine ride getting jacked when it's sitting there outside the Jiffy Market while you run inside to grab a coffee and a scone or a couple of micro brews. But if you're someone who couldn't ever see themselves on a crappy old beat up bike, well - just stop reading right now. Maybe look at the pretty pictures ugly pictures, and thanks for stopping by.

Here in Eugene, the bike theft capital of the known world, all bikes are at risk, but that's probably not the case where you live. In most places, a low-end or ugly bike will be totally safe with just a lightweight cable lock, or even nothing at all. In Colorado I never used a lock; instead, I wrapped an old black toe strap around the fork crown or rear brake bridge and the rim. It's almost invisible, but impossible to ride away on unless you remove the strap, which most thieves don't have time for or the brains to figure out: 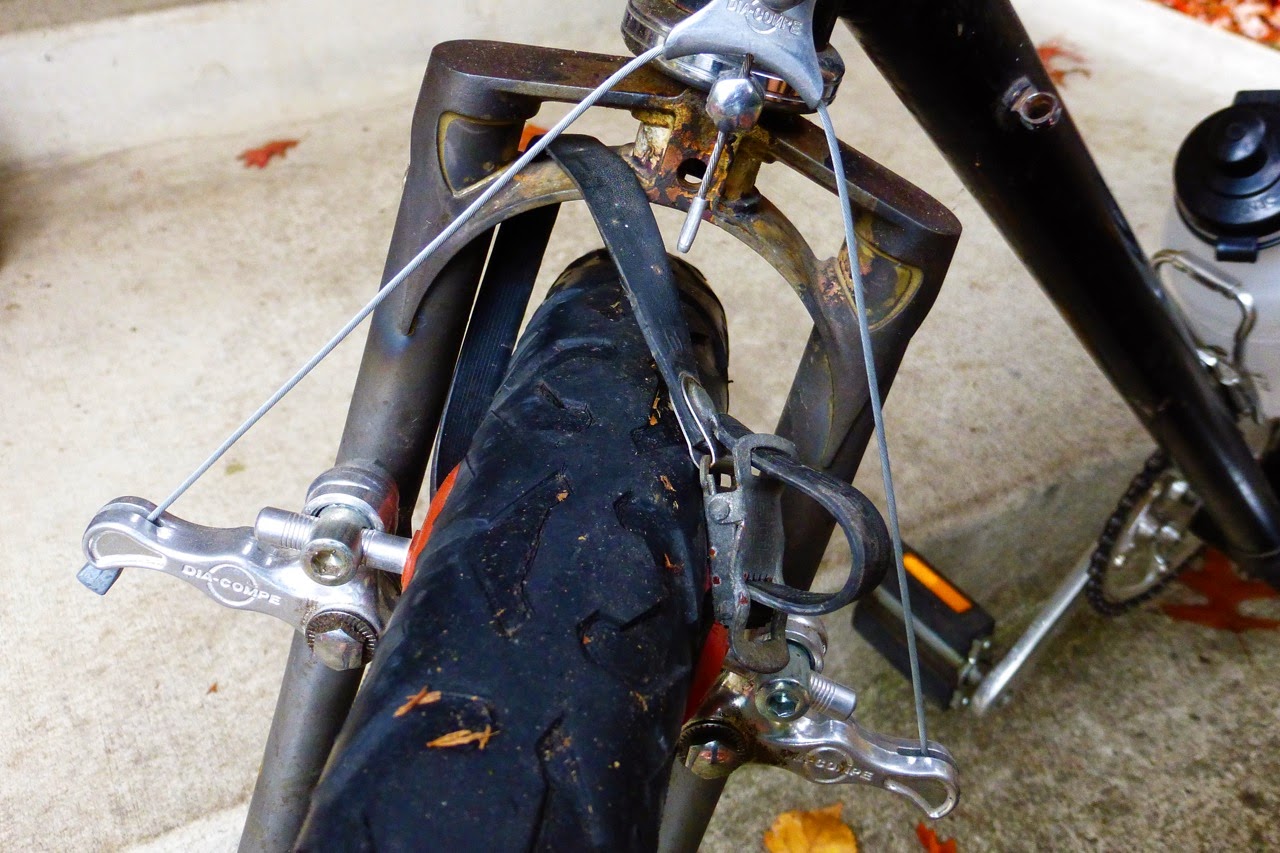 I never had a bike stolen, or even touched, until I moved to Eugene, where I've lost two. Some say it's because of the University (Duck U!) - not the students themselves, but all the slime bags lurking at the edges of society, preying upon the thousands of bicycles owned by students and faculty. True, but the bike theft problem here is also city wide. In Eugene, it doesn't matter what kind of lock or how many you have, if you leave a bike that looks like it's worth anything, it's gonna get hijacked.

What many riders do to reduce the anxiety factor is to have a beater bike, with good components and well set up, for commuting or general utility riding. An ugly city bike is less attractive in general, especially to thieves, and if it gets boosted, swiped, nabbed, jacked, filched, lifted, pinched or purloined, hey - it's no big loss.

Here's a truly crummy looking beater bike, a mid-80s Schwinn High Sierra. Under that crappy rattle can paint job (not my fault but I ain't fixing it) it's completely nickel plated so it should have a long, rust free and ugly life: 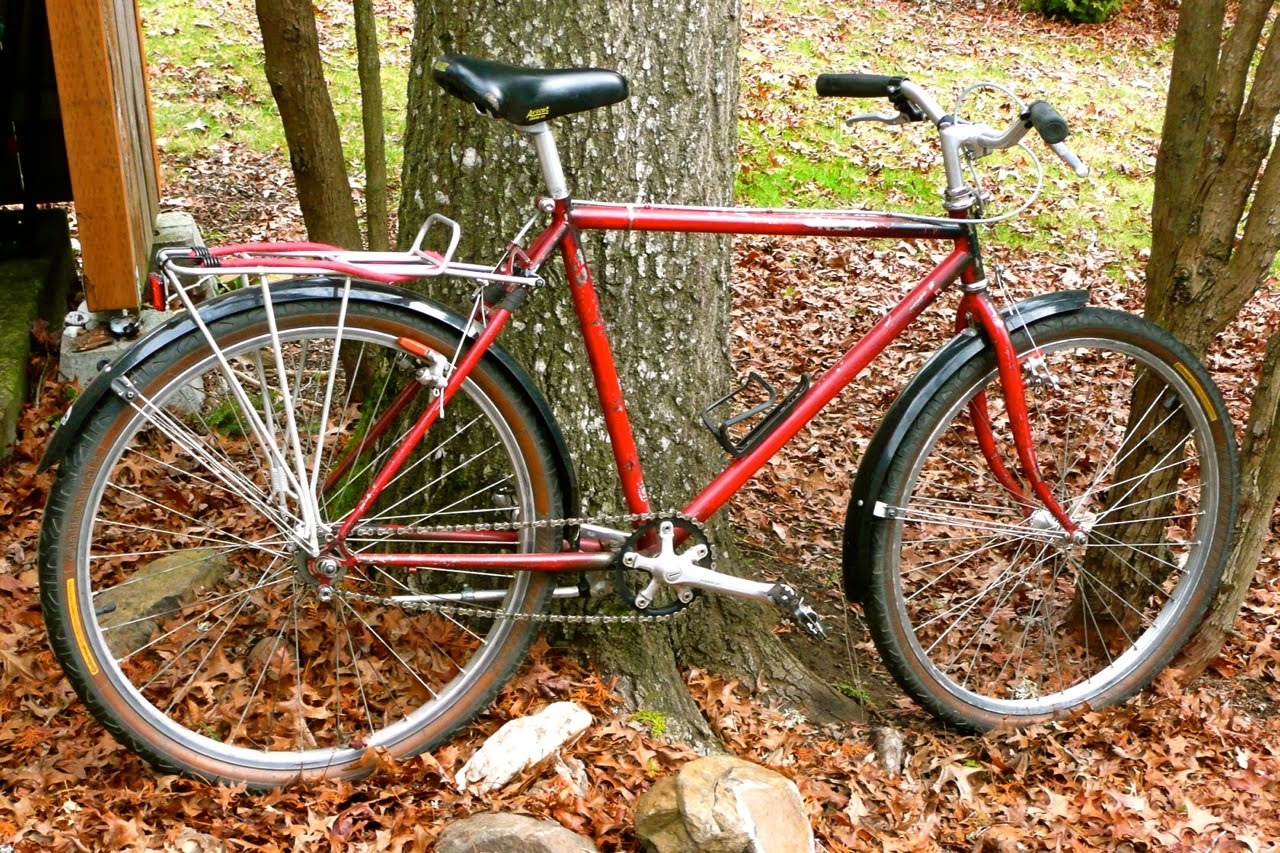 That's the yukkiest, who'd-want-to-steal-this bike I have; it's heavy and built like a tank, yet it has some virtues. As well as being virtually indestructible, it has almost exactly the same slack-angled, laid back frame geometry as a 1930s to '50s Schwinn cruiser newsboy bicycle, so it's really comfortable and tracks straight and true. You could fall asleep riding this cycle, and when you wake up you'll still be on the road.

My favorite ugly bike is something I put together a couple of years ago, my TrekStone: 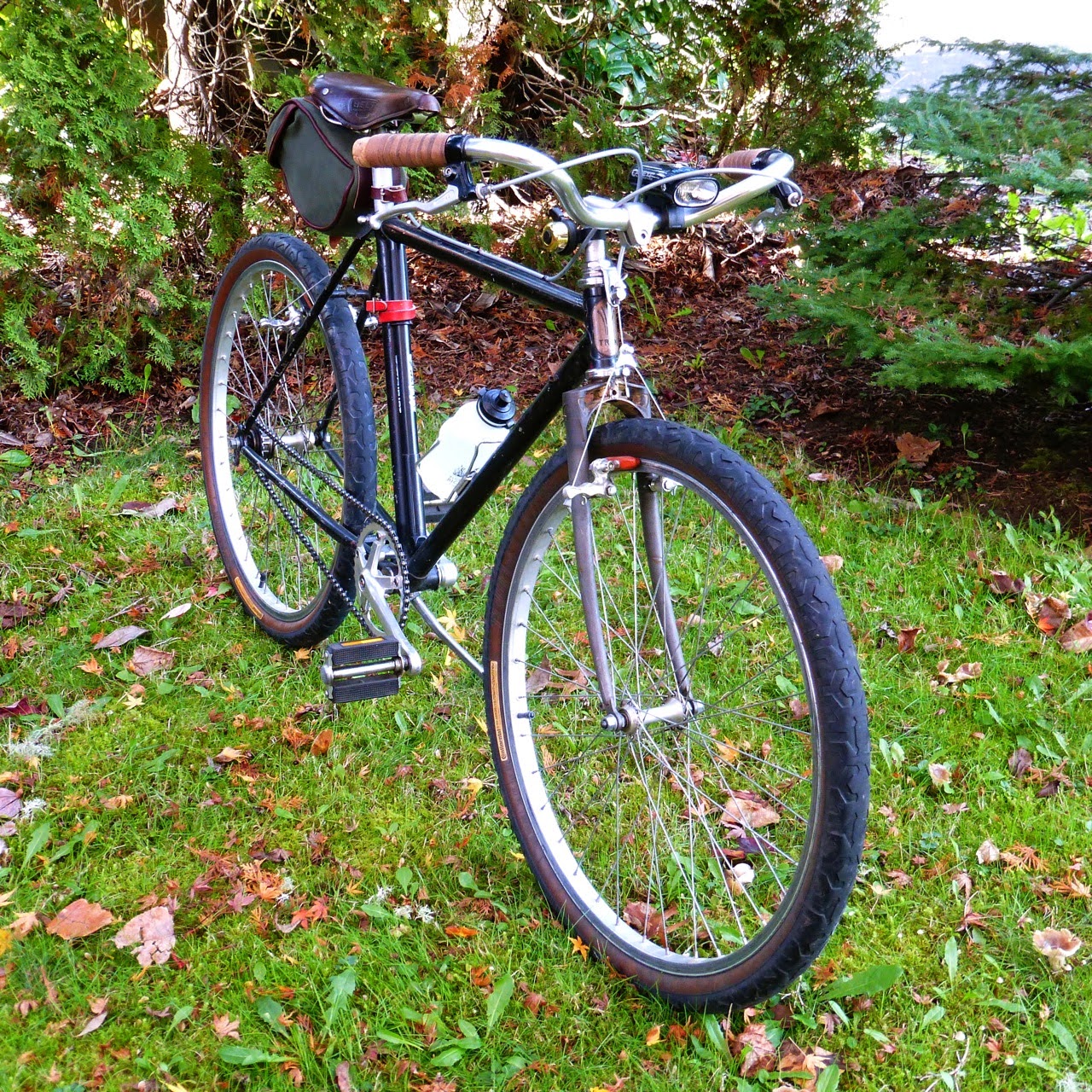 The main frame is from a 1984 Trek 850, Trek's first mountain bike, and was found at a yard sale sans fork for $5.00. It's all lugged and brazed construction, fairly lightweight steel, appears to be well made, and still straight. I picked up the rescued Bridgestone MB-1 fork for $35 at the Center For Appropriate Transport non-profit shop. A friend working there (Hi, Alfred!) did a braze repair on the arch of the Tom Ritchey designed crown, a weak spot in an otherwise beautiful design, possibly the loveliest fork crown ever made. As you can see it hasn't been painted yet, so even though it's pretty, it's also ugly: 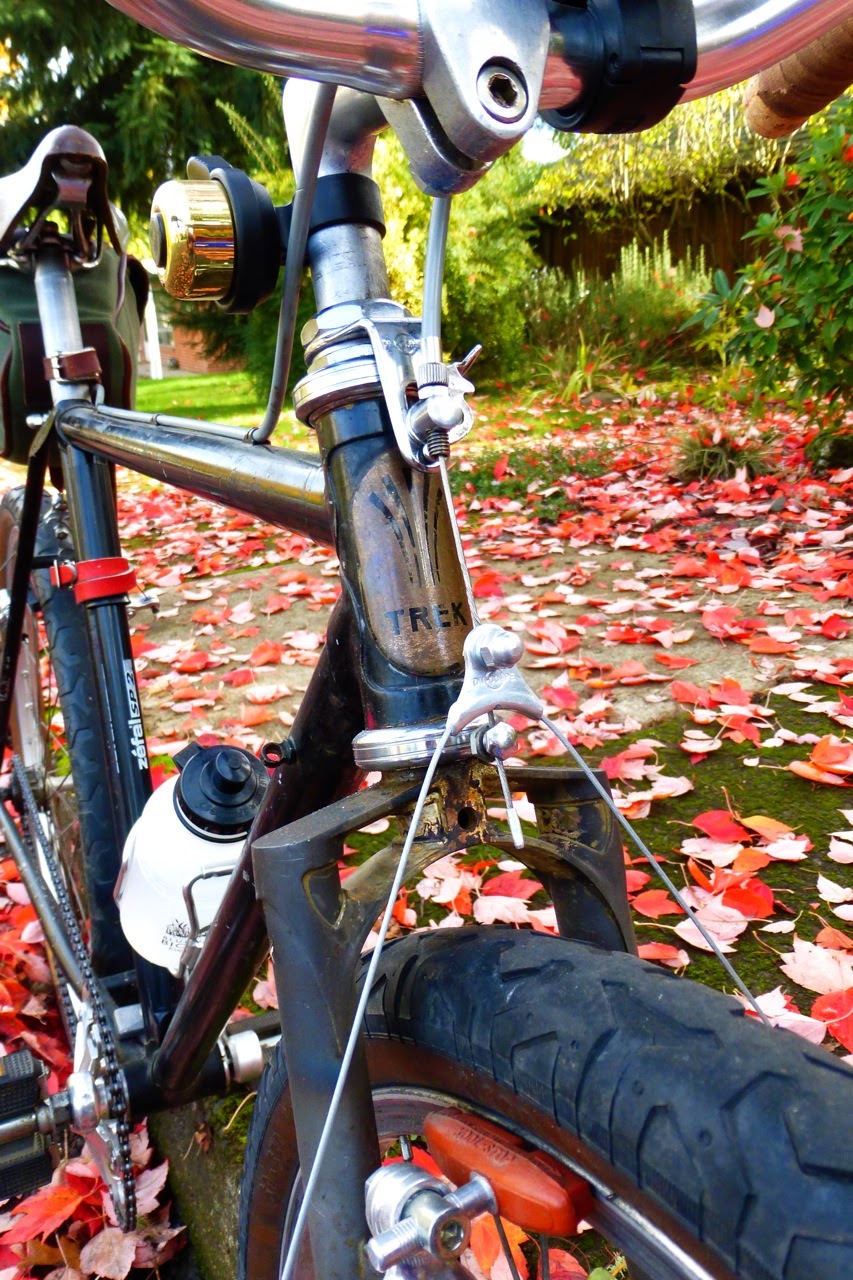 The most expensive part on this bike is the handlebar, a new Nitto Northroad. A set of NOS Dia Compe cantilever brakes are also shiny nice and new, but were craigslist cheap. All of the rest of this build are the usual suspects pulled from my criminal lineup of formerly nice parts gone bad, and I've sunk maybe $125 total into this bike, including new tubes, cables, brake pads, and rubber block pedals.

The tires are ancient Continental Town And Country inverse tread fatties, which I've had on a few bikes over the years and are now worn out and more comfortable to ride than ever. My brother Jonsan would say they're dead feeling and unresponsive, and he's absolutely right - they are dead. And like zombies, they may be dead but never die. But these tires are also dead reliable, just about un-flattable, and good for either riding on pavement or doing in-town dirt rides down sometimes pretty technical terrain on deeply rutted and potholed back alleys, all the while dodging to avoid giant lethal thorned and very much alive carnivorous blackberry creepers. 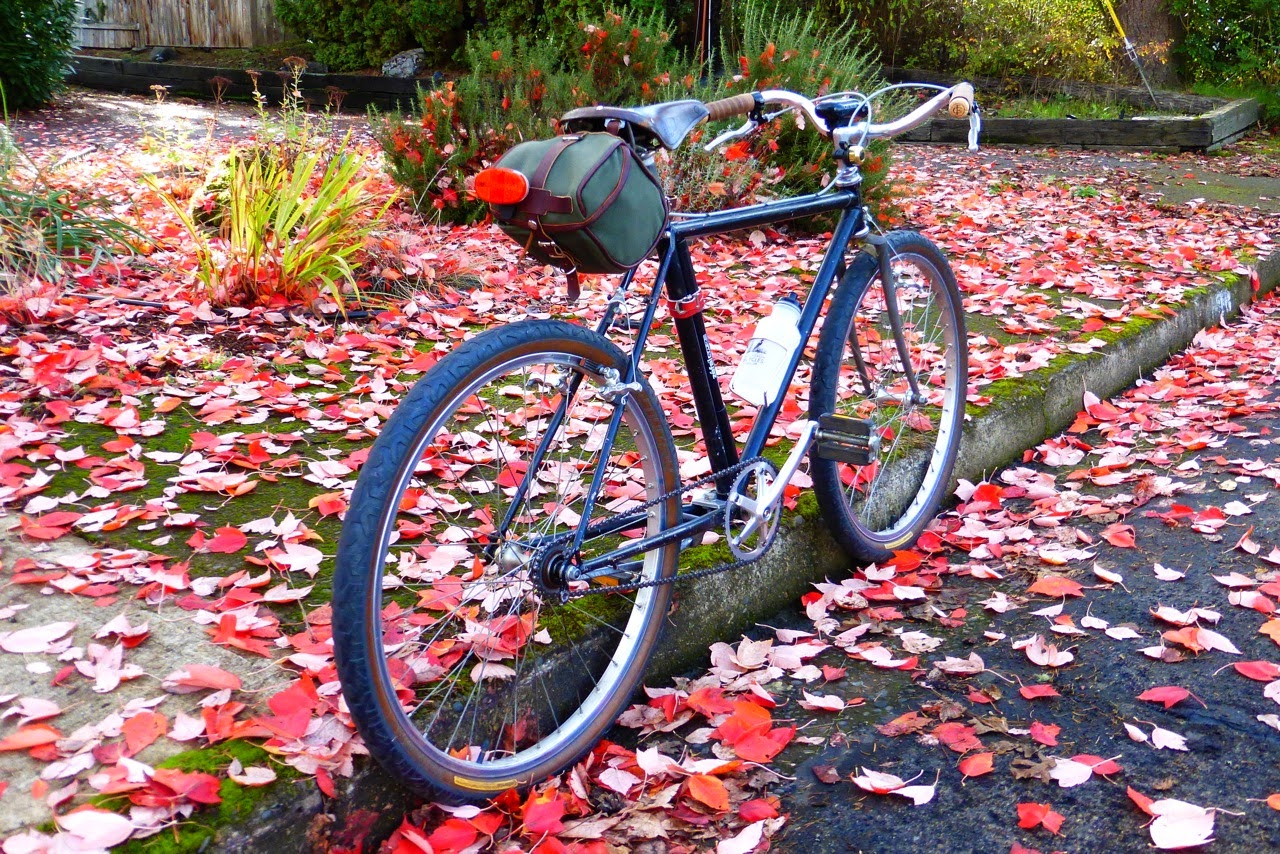 Once again I got lucky using the FixMeUp gear ratio calculator, and it's great to be able to have a single speed with vertical dropouts without having to use a chain tensioner. A 42 tooth chainring with an 18 cog results in a 61 inch gear ratio, which is an okay compromise gear for most around town riding. For more reading about FixMeUp and single speed conversions, check out my post on a Bridgestone CB-0 single-speed.

The grips are old used tan cotton road bike bar tape, wrapped over thin foam and capped with big corks from bottles of bubbly "vino Italiano d'amore". I just made that up - what I mean is the bubbly wine called Lambrusco, and I gotta say, that stuff really works. If you know what I mean. Unless your special friend is some kind of wine snob, but who would want a wine snob for a friend? Maybe a hot wine snob, okay.

Classic European rubber block style pedals have great grip, nice smooth bearings, ride-able in any shoe, even barefoot or flip-flops - so what's not to like? And the seat is an old Japanese leather saddle that I've had like forever, goes on most of my favorite bikes, and not to get too personal but after all this time it fits very well down in "that" region. If you know what I mean.

This Trek frame has the longest chainstays known to man, and though it makes for slightly sluggish turns, it does have a super stable ride: 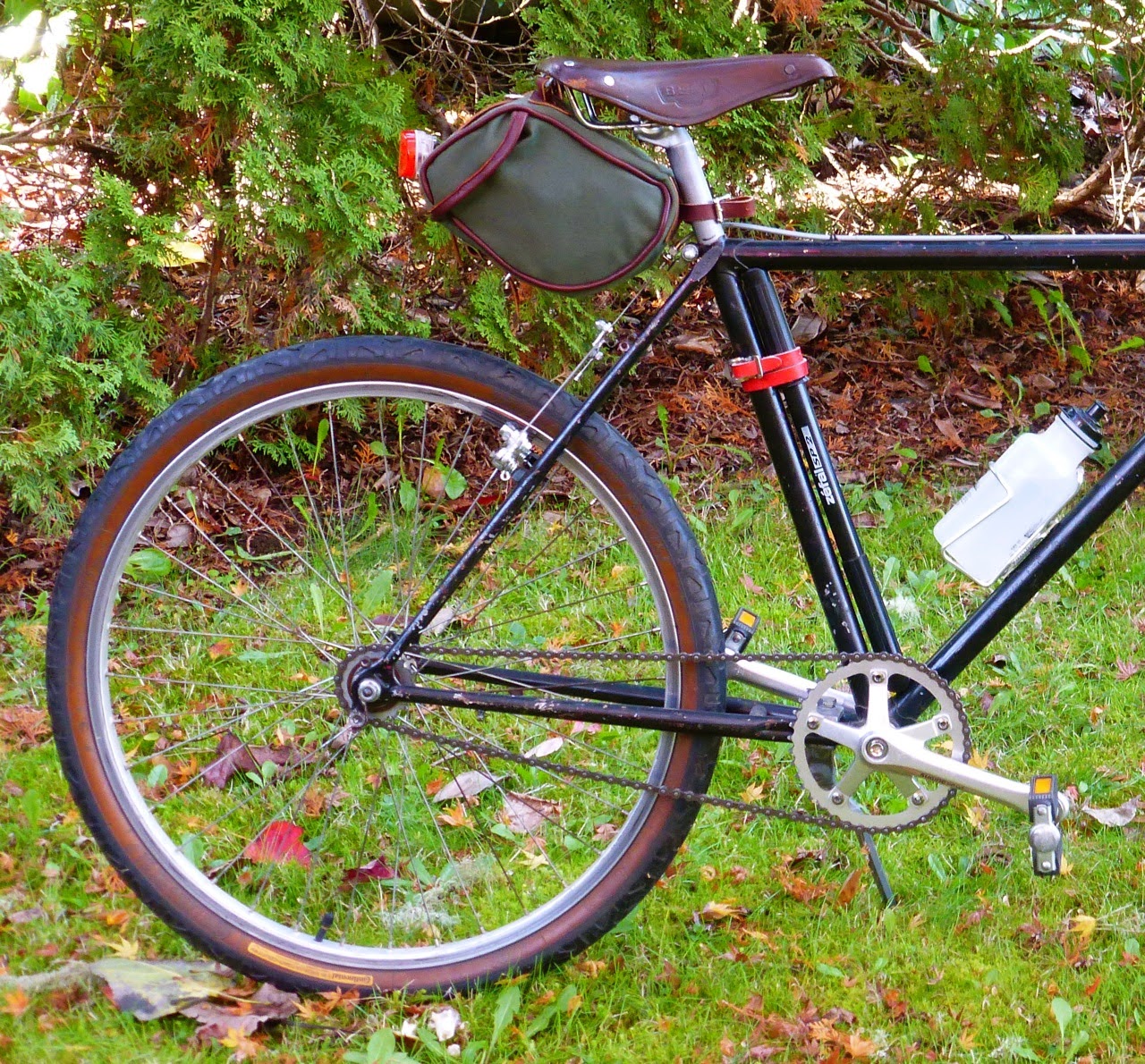 Even though it's designed for an all-terrain bike, the frame has a fairly low bottom bracket, and would probably make for a nice touring machine. Trek's later mountain bikes had the usual shorter chainstays and higher bottom bracket height, and these first-gen 850s are the only ones made with this strange but interesting geometry. The fork and frame are from different decades and designers, but they go together well, and the combination has a surprisingly pleasant feel and true ride. Paired with Panaracer 1.5" skinwalls it can be quite zippy; even with old dead Contis this frame combo is still a lot of fun.

I'm thinking of eventually having the Trek frame and B-Stone fork painted some nice metallic color, sticking some derailleurs and pannier racks on it, and having a really cool looking touring bike. That's a possibility for a future long distance trek. For the present, I'm stuck in the city, and it's my favorite ugly bike.

And finally, that's one of my own under saddle bags, a modification of an old French design and made right here in Eugene, USA, and one of these days I'll probably offer them for sale; if you're interested, you can email me. 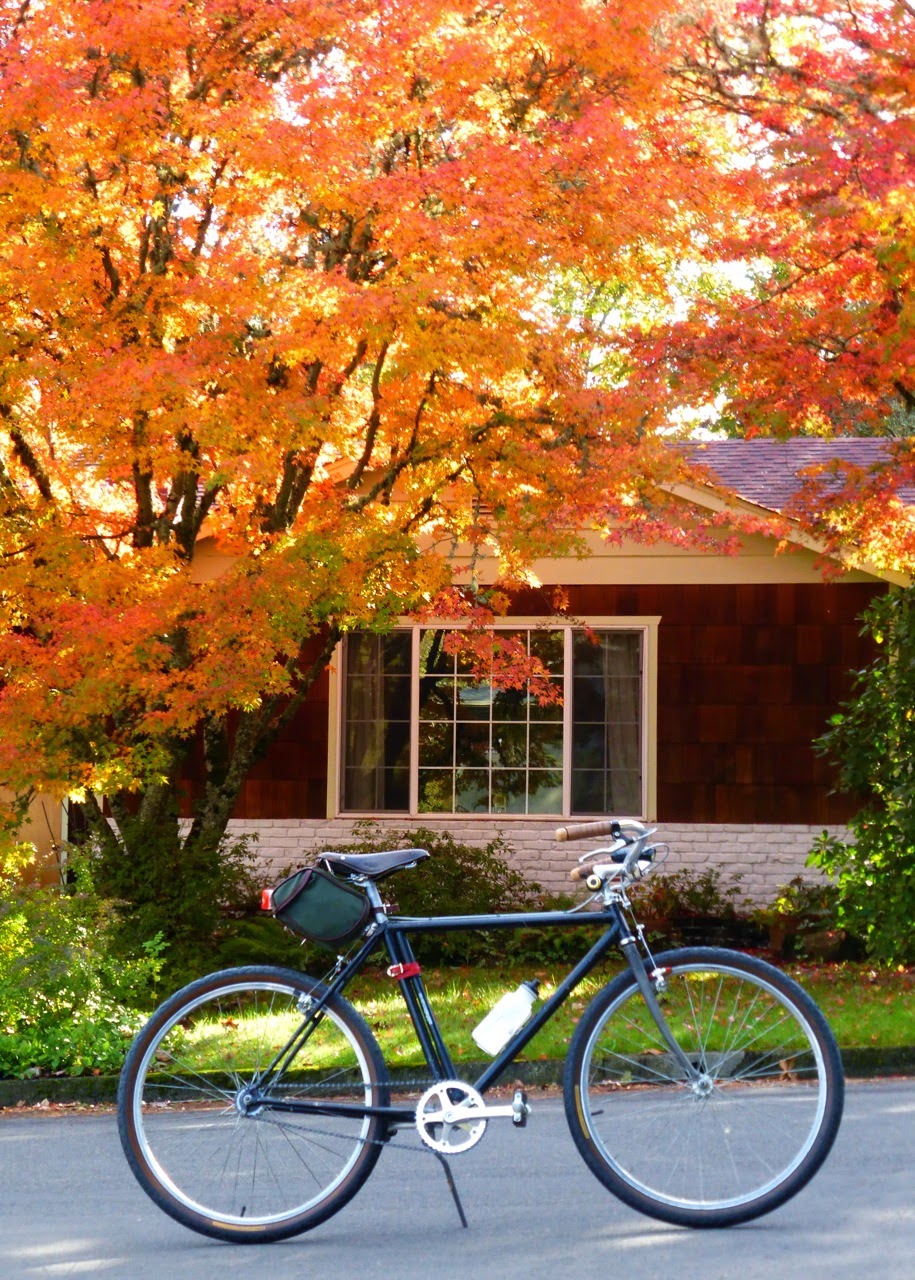 Thanks for looking; all of the photos in this post can be clicked or tapped on for larger, higher-def images.
Posted by James Aoyama on 11:00:00 AM

What tires are those? The Continentals with the brown sidewall. Do you know the model name and size?

Yeah, I know what those tires are - I'm the Dr Frankenstein of this pile of un-dead parts. About 2/3 down the page, there's a whole paragraph about them: a pair of really old "Town And Country" model by Continental, 26"x1.9". Had them forever, they're unkillable. I think Continental still makes them, but not in brown sidewall anymore. Sad, very few tan / brown / gum sidewall tires these days.