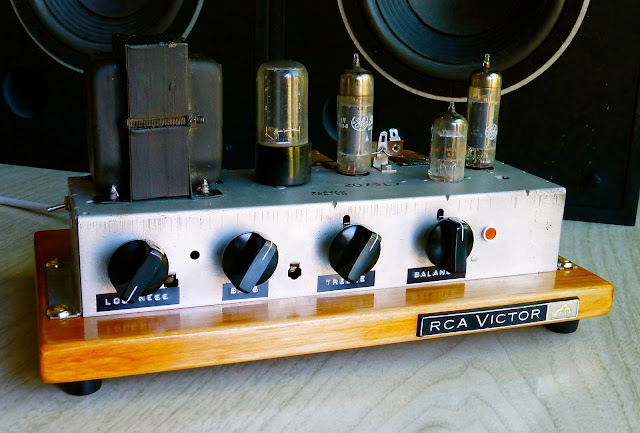 Summer before last, there was a big charity yard sale here in our neighborhood, proceeds of which benefited a local pets help society providing among other things, low-cost veterinary services. During this time in our nation's history when a sizable percentage of the population is morphing into a grievance driven neo-fascist authoritarian cult, rejecting anything related to the common good (and all you soulless gun-clutching lizard people know who you are), I'm thankful that our family lives in an old fashioned American town, now considered "socialist", where helping others still matters. Also parks, swimming pools, libraries, arts and music, summer activities for kids, senior centers, hiking and running trails, post offices, an Amtrak station, and dog play parks! 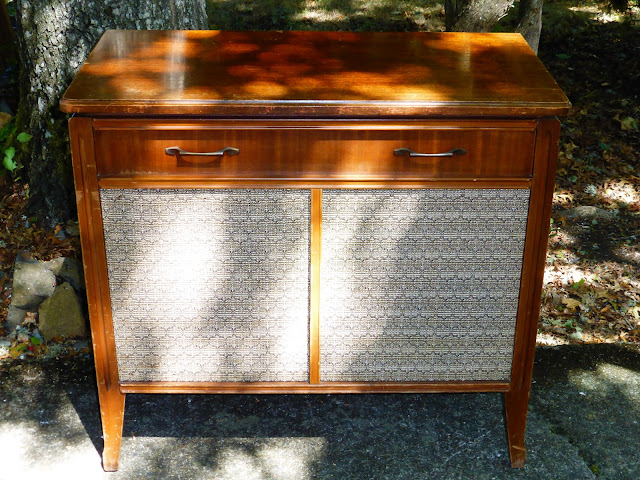 Don't know the model name or number of the console, but the amplifier section has an ink-stamped "RS-193D" on its top surface; see circuit description below. This console didn't have an AM-FM radio tuner, only a 3-speed phonograph record changer turntable, with a high output (near line level) ceramic element cartridge + stylus assembly. When I got the console home, I plugged it into power, let it warm up for a bit, put an LP on the platter, and turned the knob on the turntable to "Play". The stylus arm didn't automatically move over and plop the needle onto the record, as it should have done, but the platter spun, and the arm let me pick it up and place it on the outer LP grooves. Here comes the West Coast Dixieland sound of Jake Stock and his Abalone Stompers  - it works!

As expected, the musical tone could have been better, but it was okay, and surprisingly quiet and hum free. Next, as a test, I disconnected one side of the speaker-out leads, and hooked that up to a known good sounding speaker, and wow - that was a huge improvement over the stock built in drivers. It was all there - deep tight low end, detailed mids, and shimmery and almost magical sounding highs.

Since, 1) the record changer was basically not totally operational (and I wouldn't have trusted it with some of our vintage LPs anyway), 2) the console's speakers weren't exactly audiophile quality, and 3) as furniture, the console cabinet had seen better days, the next step was obvious. Rescuing the really great sounding tube stereo amp section and re-purposing it sounded like a fun project.

The amplifier was removed, and the console cabinet, with turntable, was sold on craigslist (really cheap) to someone looking for a vintage piece of furniture to refinish and use for storage - the full width hinged top lid was a great feature for that purpose.

Here's a quick rundown of the amp's basics:

The next picture shows the amp innards, after I'd done a few minor changes: 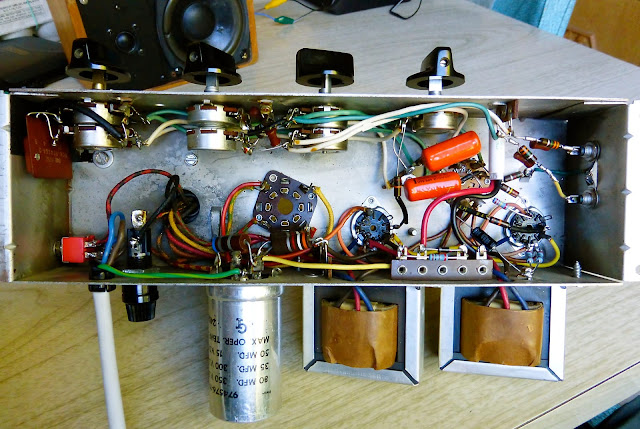 In the above photo, note the flat brown "blob" in the upper left corner - that's a separate component board, encased in some sort of soft mastic-y material, that holds the loudness control sub-circuit. That's one of the keys to this amplifier's sound; not only a volume level control, the loudness circuit also has a variable level Fletcher-Munson EQ compensation, subtly boosting the lows and highs at lower volume settings.

A short list of the non-invasive "mods" performed on the amp:

- Added a power on/off switch (originally done at the turntable's "play" knob)
- Added an easy to access fuse holder
- Installed a larger gauge 3-conductor grounded AC cable, with strain relief
- Lifted one leg of the 6.3VAC tube heater loop from ground, and installed 2x 100 ohm resistors referencing both heater legs to chassis ground
- Removed the original hard wired audio input terminals, and replaced with a pair of standard RCA jacks
- Installed a low light-level LED power status lamp, hooked up to one leg of the heater supply; the added terminal strip at the bottom of picture just right of center, shows the voltage dropping resistor and IN4007 diode
- In place of the original control knobs, which had shafts long enough to reach through the 3/4" cabinet panel, four vintage made in Chicago Dakaware Davies style knobs were fitted

At some point in the past, some professionally done servicing had been done to the amplifier - note the pair of large orange .047uF Sprague coupling capacitors, and a replaced 220K plate load resistor. Nice to know this old stereo had been loved enough to be well taken care of.

A great part of doing this project is that since it was in fantastic shape and sounded good as is, no major repairs or circuit changes had to be done; in fact, the audio pathway in this tube amp is all original and unmodified. Also, no additional holes had to be drilled in the chassis, although some had to be enlarged to accommodate added parts, such as the fuse holder and power switch.

Here's a view of the back of the amp. The General Instruments multi-section can style capacitor is still in excellent condition after all these years - not even a bit of audible hum. The output transformers were made by Midwest Coil And Transformer, in January of 1962: 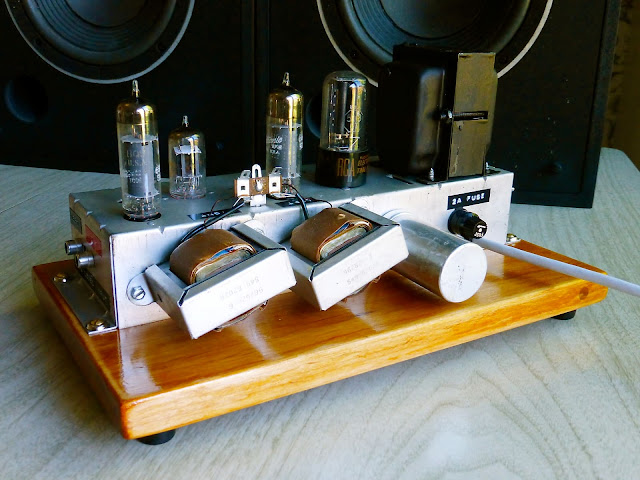 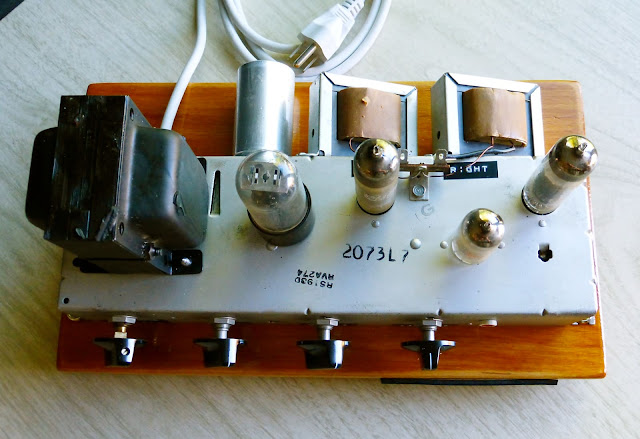 The amplifier chassis was mounted on a piece of rustic finished old growth Oregon alder board, reclaimed from a house being remodeled in Eugene Oregon, originally built in 1964. This board, previously a part of a utility room shelf, had no finish on it. After cutting it to length, a light sanding got it down to clean wood, and two coats of amber shellac were applied, with a steel wool rub down between coats. The last step was polishing with a rag cut from an old favorite cotton flannel shirt.

The RCA Victor logo badge, with the classic style "His Master's Voice" dog and wind-up Victrola, was originally on the front of the console that this amp was removed from. The badge, made of plastic, has two round pins on its back, which fit into two holes I drilled into the front edge of the plank: 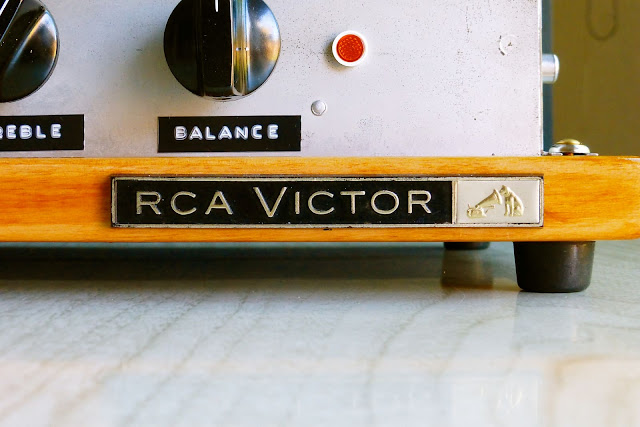 The black rubber feet are from an early 1960s McGohan tube paging amp, which received much larger new rubber feet.

Here's a picture of the nicely muted LED power indicator lamp in action: 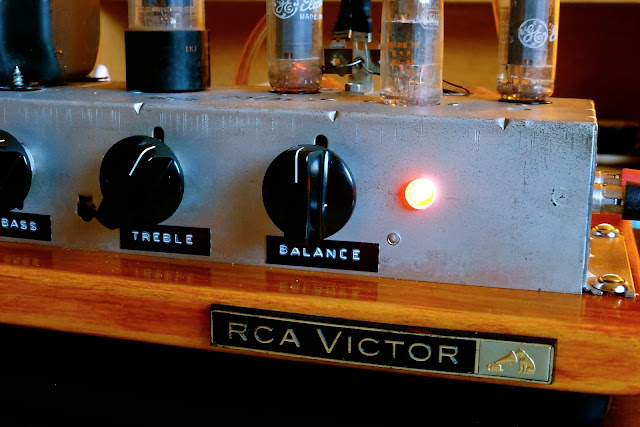 The LED indicator lamp is a redundant feature - the four vacuum tubes are themselves a sure way to tell if this amp is on. But it was fun to install, and there was already a hole in that spot, so why not? At first, I put in a neon lamp, but yow - that was noisy; the LED is dead quiet.

One end of the chassis has the new RCA style audio input jacks. I had only black and red old fashioned Dymo label stock on hand, but they corresponded nicely with a vintage Switchcraft double-RCA cable with red and black coded plugs: 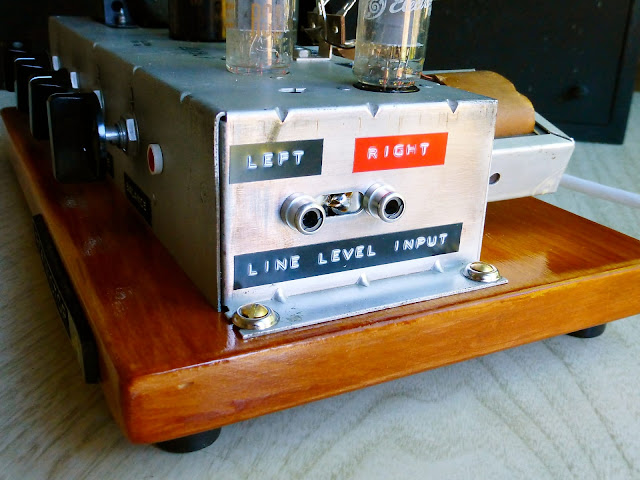 I like Dymo punch style labels, they're incredibly retro and vintagey looking, and certainly are era specific for this 1960s amp.

A shot of the other end of the chassis: 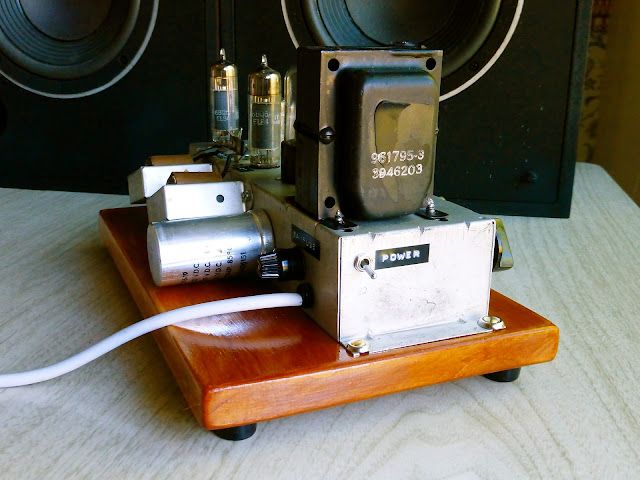 Close up - here you can see the bat lever of the miniature DPDT AC switch, the AC cable w/ strain relief, and new old stock fuse holder. Also, a good picture of the slot head brass wood screws and stainless trim washers I was lucky enough to find at our local "home town" True Value hardware store, only 10 blocks away: 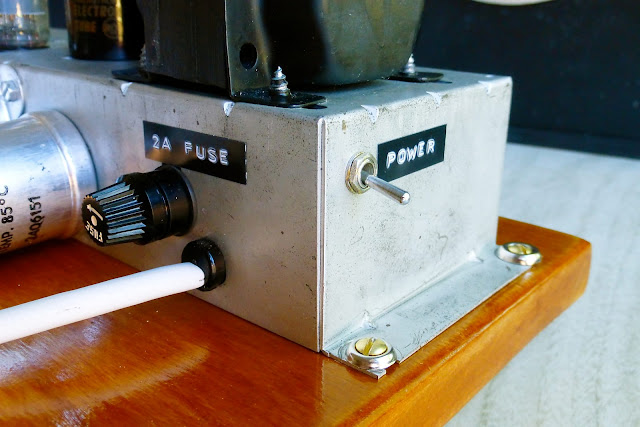 The power transformer, made by the Foster Transformer company, also in January 1962: 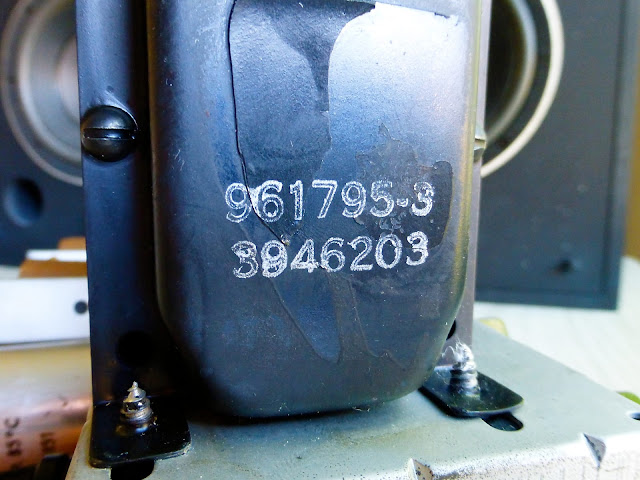 Another front view of the amp. The RCA 5Y3 rectifier and RCA 6EU7 driver tube are likely original. The General Electric 6BQ5 output tubes might be original equipment, or possibly replaced when the amp was serviced a few years ago. Note also the interesting speaker output terminals; I had to fabricate a pair of dedicated speaker cables, with two "+" fittings, and only one "-" fitting. 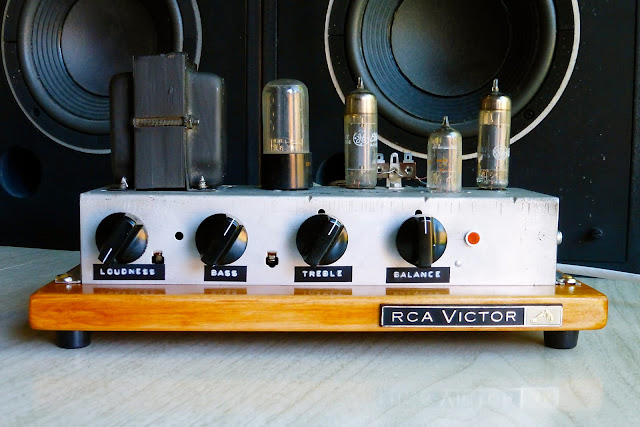 Here's the back side again: 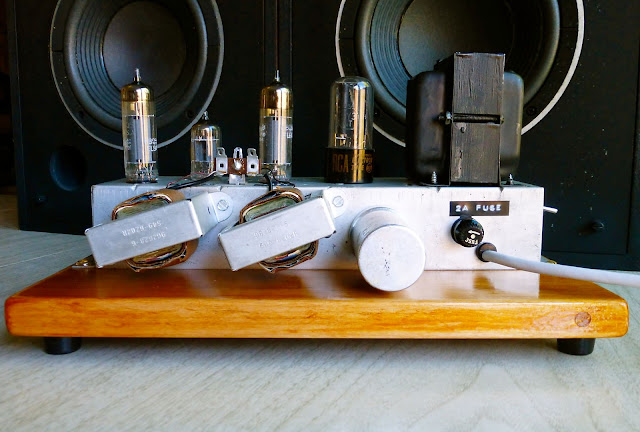 In its original location in the console, the amp's knobs were pointing up, and the tubes and power transformer were sideways. The pins on the vacuum tubes are probably a lot happier now. Actually, since the rescue and re-purpose, this old tube amplifier seems to sound happier overall.

Using an adapter cable, an iPhone was hooked up, with great results. In this picture, you can see the amp end of the speaker cable assembly: 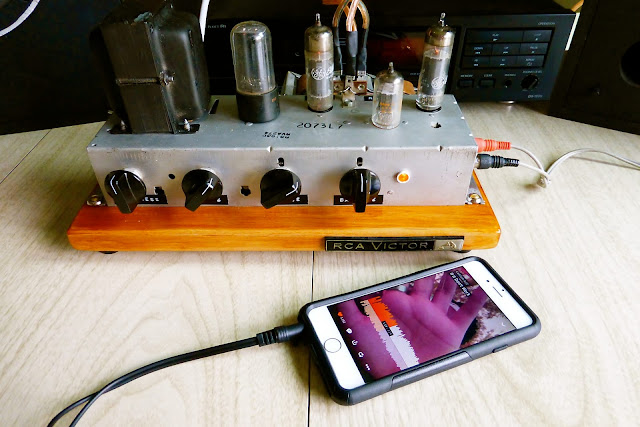 The RCA RS-193 has been hooked up to a few different pairs of vintage speakers; here are three of them, with an Onkyo DX-1800 compact disc player as an audio source. First, a pair of late '70s JBL L19: 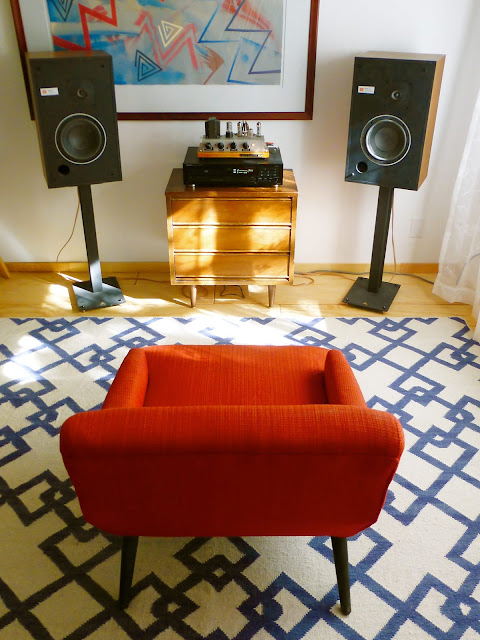 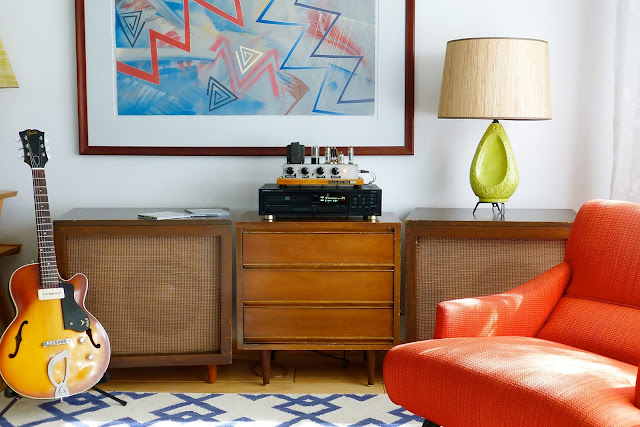 Sure, both sets of JBls sounded as awesome as they always do with almost any amplifier, but the most relatively astounding match up was with a pair of 1980s Radio Shack Minimus 7 mini speaks. I could go on about how honest and realistic everything sounded with this system, but you might not believe that a 3 to 5 watt per channel amplifier and tiny speakers could reproduce music so well. Guess what? They do. 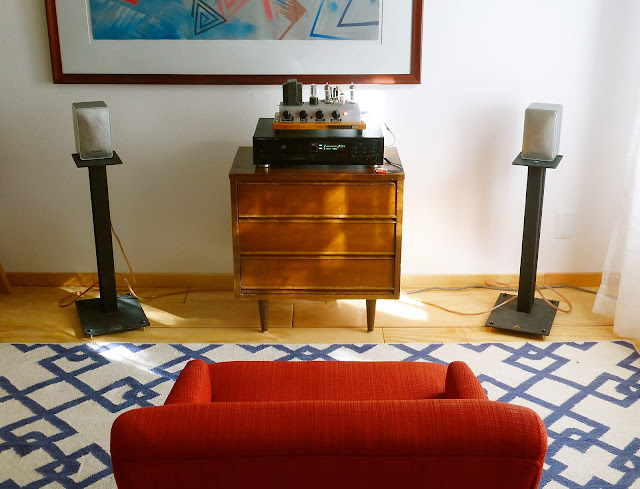 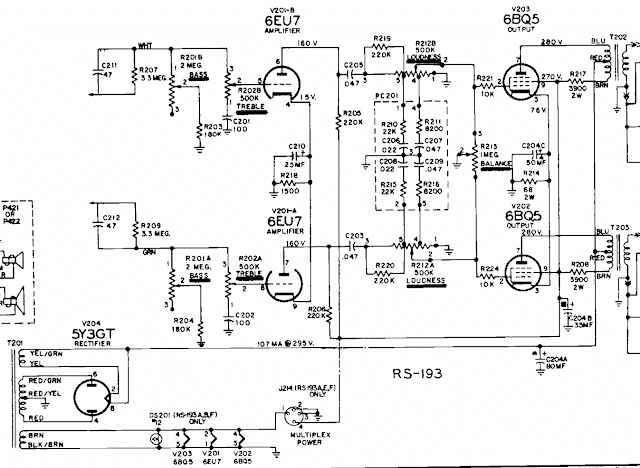 Without going into a lengthy full analysis of the RS-193's circuit, a few key points are:

• The bass and treble controls are passive instead of active; that is, they are subtractive in their action, cut only, and since they don't boost bass and treble at their respective knee frequencies, it eliminates the possibility of any unwanted resonant peaks in the overall frequency response.

• Rather than "volume", there is a "loudness" control. Each channel's loudness potentiometer (1/2 of a double ganged 500K pot) is multi-tapped and connected to a sub-circuit between the driver amp and power output stages, which enables a variable EQ compensation effect (ie: Fletcher Munson curve) dependent upon the overall volume level.

• At roughly 56mA of plate current at idle through each of the 6BQ5/EL84 output tubes, this amp is firmly in Class A territory.

• With an 80uF electrolytic capacitor on the DC leg of the 5Y3 rectifier tube, the RS-193 has two to four times the primary B+ filter capacitance of most tube amplifiers with similar plate voltages, which helps to reduce hum and noise.

• Instead of two single-ended output transformers, each 6BQ5/EL84 is connected to the primaries of its own double-ended output transformer. The B+ voltage from the power supply is hooked up to the center tap, one primary leg is connected directly to the 6BQ5 plate, and the other leg, which acts as an additional filter choke, goes to the screen grid of each 6BQ5, through a dropping resistor (and also provides voltage to the plates of the 6EU7 driver tubes). This ingenious use of two double-primary output transformers, with their added AC ripple filtering, helps to keep the amplifier's noise floor down - a good thing in general, especially since single ended tube amps tend to have a bit more inherent noise than push-pull circuits.

All in all, a deceptively simple yet sophisticated, efficient, and tonally superior tube amplifier circuit design. This amp came along at the very end of the first tube audio era, just before transistors took over, and may well be the very last tube amplifier RCA ever designed and manufactured.

Click or tap on any photo above to see larger, higher def images. All photographs taken with a Lumix ZS25 pocket travel zoom camera.