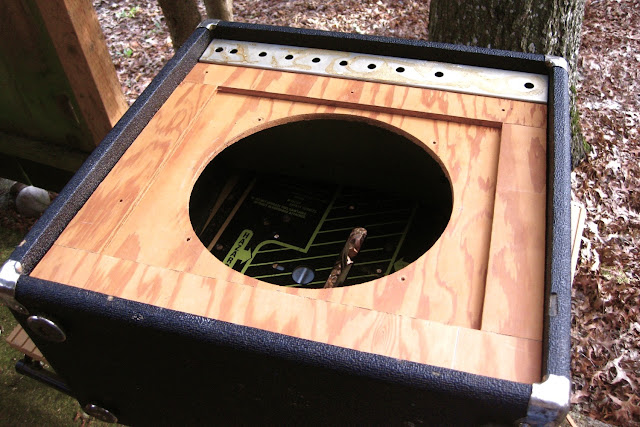 In Part 1 of the Peavey Pacer Tube Amp Conversion Project, we bought a really cheap Pacer, which the seller admitted didn't work very well. The main goal at the time was to rescue the very nice sounding Eminence / Carvin British Series 12" speaker that was in it. Here's how the Pacer looked when it first came home: 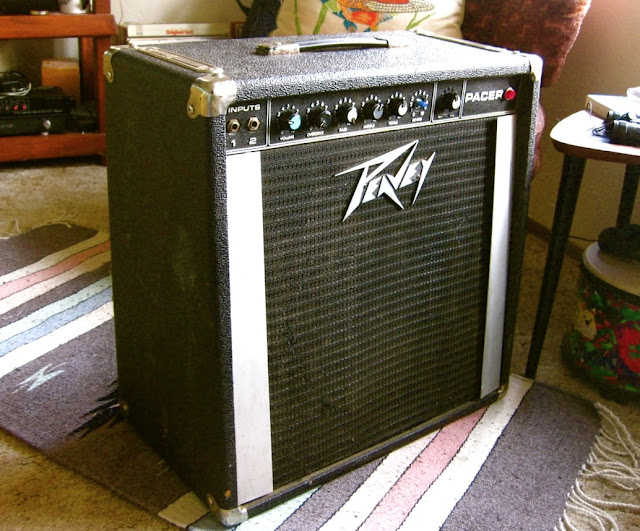 The Pacer's amp section was eventually successfully repaired. However, while it was busted, I decided to salvage the excellent quality light weight jointed pine cabinet, and turn the chassis into a simple tube amp. So even though it now worked well, it was still taken apart, and the working - and very much alive and loud - circuit components were sold, and the horrible looking and super heavy baffle board was given to a junk-loving neighbor: 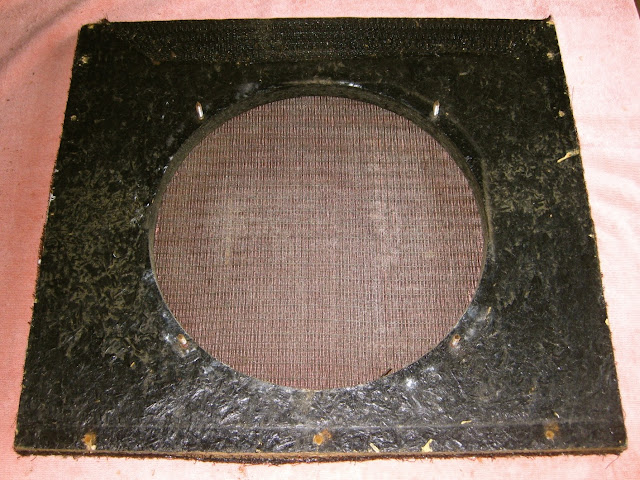 Before it was cut smaller, I should have taken a photo of the replacement baffle, which came from an ancient (and dead) electronic organ. It was so old that the speaker cutout hole was larger than any made in the last 60 years at least, but luckily the mounting screw + T-nut diameter was almost the right size. After trimming the board to fit the Pacer cab, I shortened the left over pieces, to make a "rattle strip" frame on the front of the baffle, which was glued and stapled to the baffle: 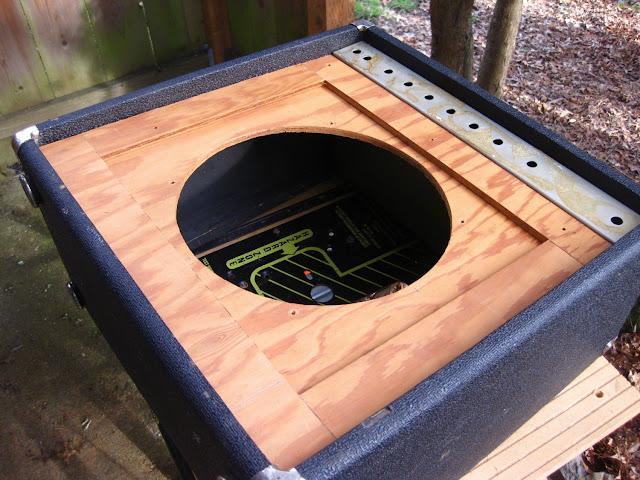 Not shown is another smaller piece of leftover plywood attached at the upper left of the baffle to hold a logo badge.

Here's a picture of how much the new modern, larger T-nuts hung over the organ speaker baffle cutout - only three out of four tines took a grip into the plywood: 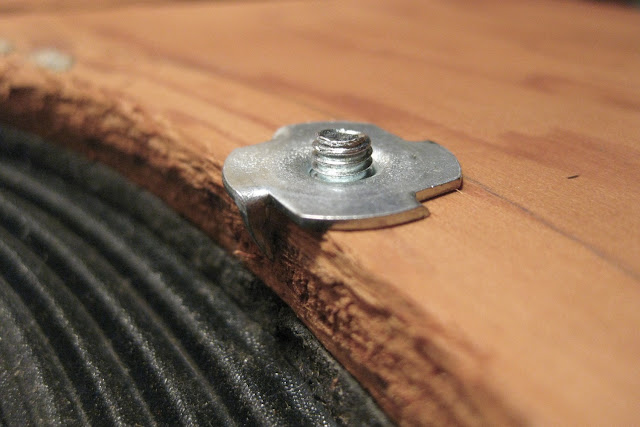 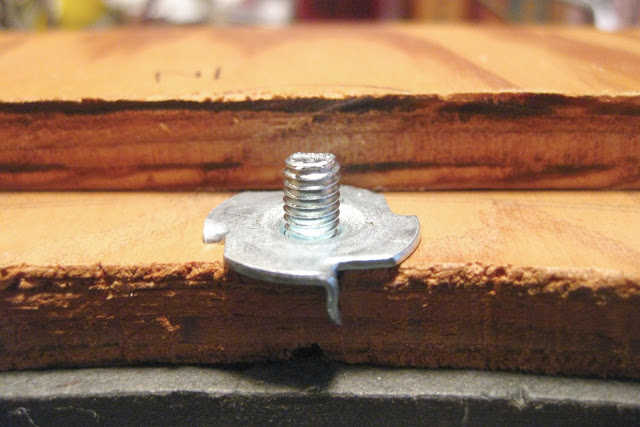 A new machine screw + washer, one of four holding the speaker down onto the baffle: 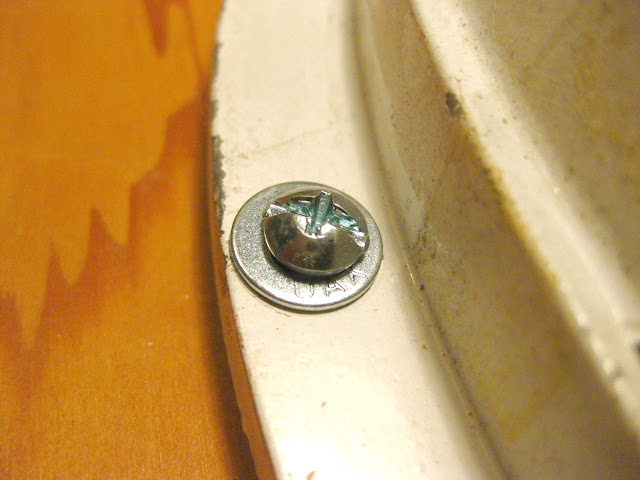 This particular 12" speaker is a much used and well loved early '70s Altec Lansing 417-8C, re-coned badly by a place I won't mention: 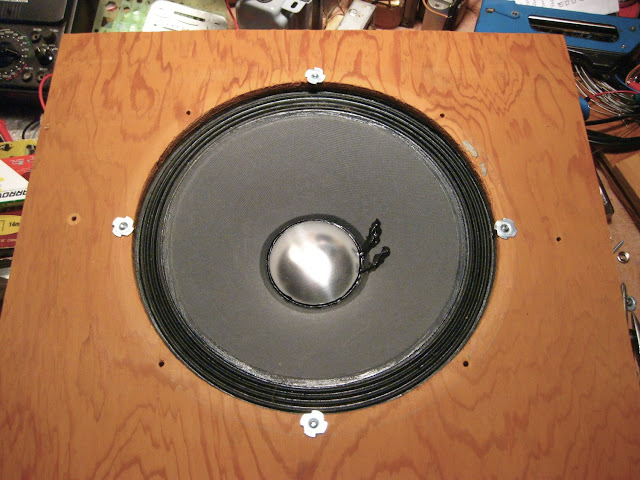 When I first got the Altec, it was new, minty, not a scratch on it. If you ever wondered why many older guitar amp speakers are beat to sh*t, it's from heavy gigging during the waning days of the now bygone saloon and roadhouse era.

Often one-nighters, when the show was over the cables would get rolled up and shoved into the bottom of the amp, whatever effects pedals were also thrown in there, along with a beat up Unidyne 545 (later an SM57) vocal mic, and the amp (either a 1965 Fender Pro Reverb or a '64 Deluxe Reverb) would get humped out to the parking lot and tossed into the trunk. The wear on this Altec is from about 450- 500 gigs over a 5 year period: 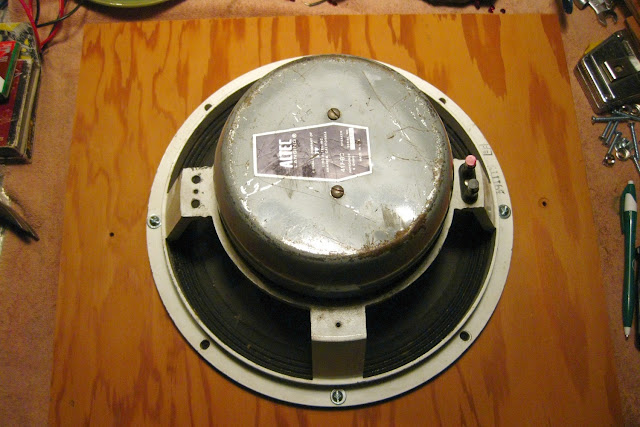 My guitars looked almost as bad.

Here's what the magnet structure of an Altec 417 looks like under the sheet metal cover. What you see isn't the super powerful Alnico magnet, it's an iron basket surrounding the magnet and concentrates the magnetic field for higher efficiency, according to some scientific principles I don't pretend to know. "I only drive these race cars, ma'am, I don't design 'em!" (quote from A.J. Foyt): 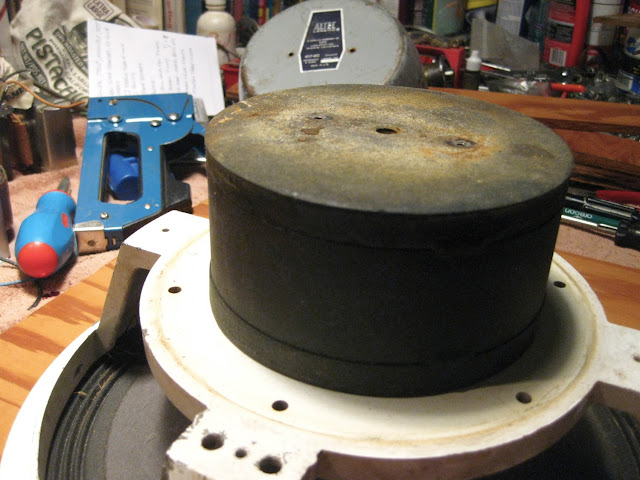 Note the old blue Arrow stapler in the above picture - that's going to get used when the grill cloth gets attached to the baffle.

Here's the beautiful grill fabric, unrolled right after getting it in the mail from friend David in Massachusetts. This material also came from an ancient organ, but still in really nice shape: 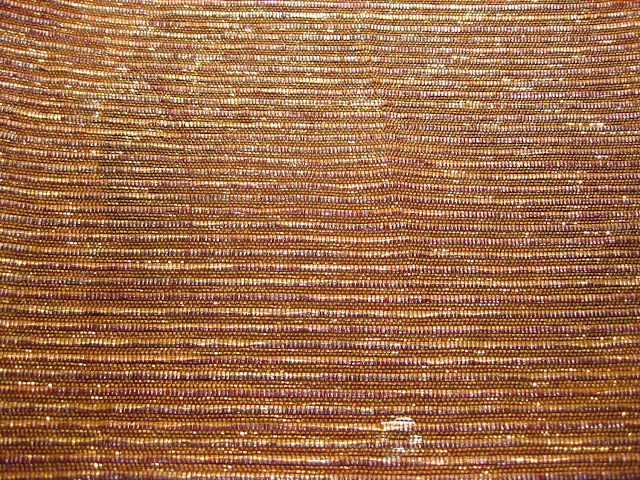 I put that cloth under a heavy rug for about a week, and most but not all the kinky bends in the fabric settled down.

Sorry, didn't take photos of the grill cloth attachment process, which was an hour and a half sweaty wrestling contest between me, the material, the baffle, and the staple gun. After three long rounds, I finally won the match.

Check out the really ugly glue residue left behind after the original front control panel plate was removed: 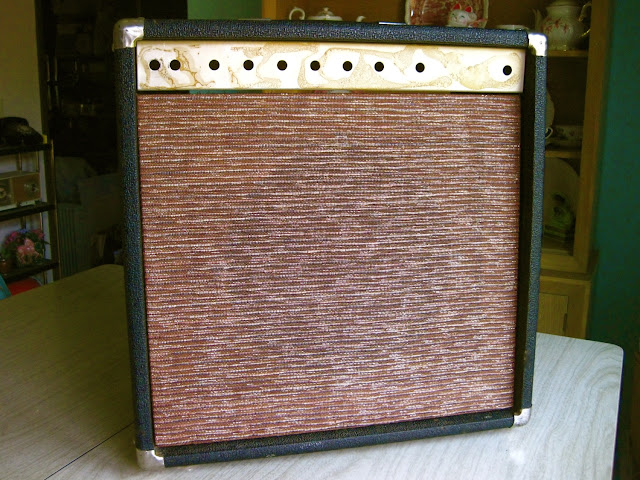 Actually, I kept getting dissatisfied with the way the weave didn't want to lay straight, so the staples were pulled, and we started 'rasslin again. In the next picture, you can see a few of those staples. After getting the cloth on as straight and as tight as possible, a metal straightedge was placed on the back of the baffle, and the cloth was neatly trimmed with a new blade in a Stanley knife.

I was going to paint the baffle black prior to putting the cloth on, like most other guitar amp speaker boards, but the grill material looked best in front of the natural golden color of old fir. Note the "semi- floating" baffle attachment to the three cleats on the cabinet sides: 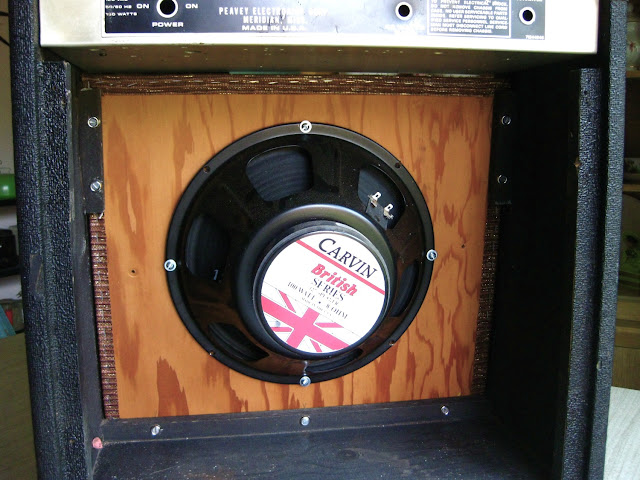 Here's a close up of a machine screw holding the Carvin/Eminence to the baffle, and a wood screw attaching the board to the cleats: 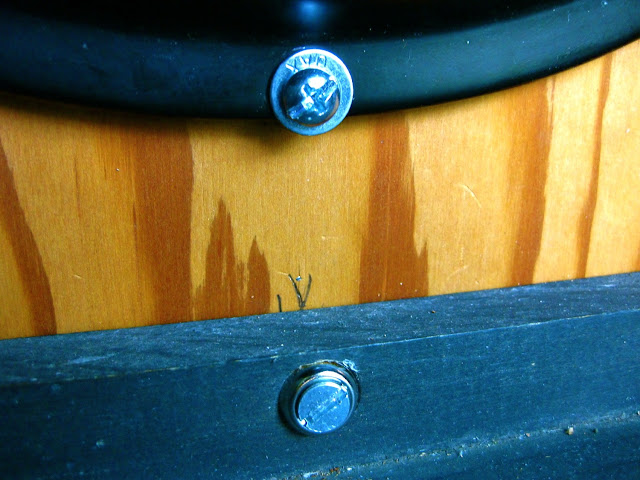 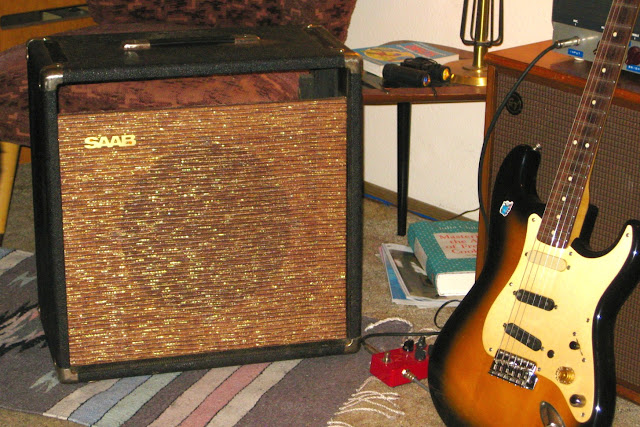 This upside down picture shows a possible component layout. The power transformer (also old ex organ amp), with 660VAC no-load on the secondaries, used to power 4x 6K6 output tubes, as well as 3x 6SN7 preamps + inverter and a 5U4 rectifier. It should (hope!) provide enough current to do a cathode biased 20 - 25W push pull 6L6GC circuit: 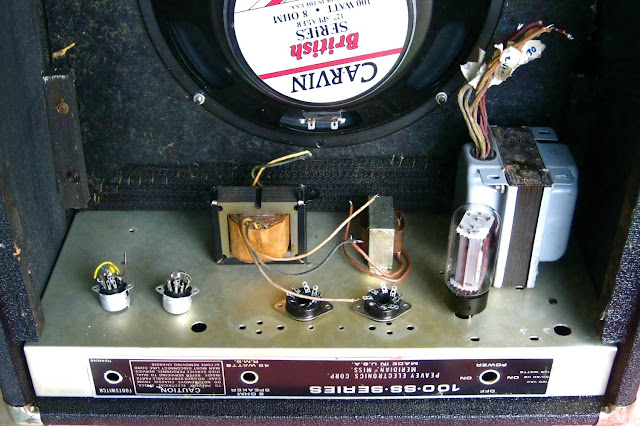 Penciling in the location of the tube sockets. It shouldn't be too hard to drill out their holes with a step bit, since the chassis is aluminum. The mounting holes for the power transformer will be reinforced with steel straps inside the lightweight metal chassis. 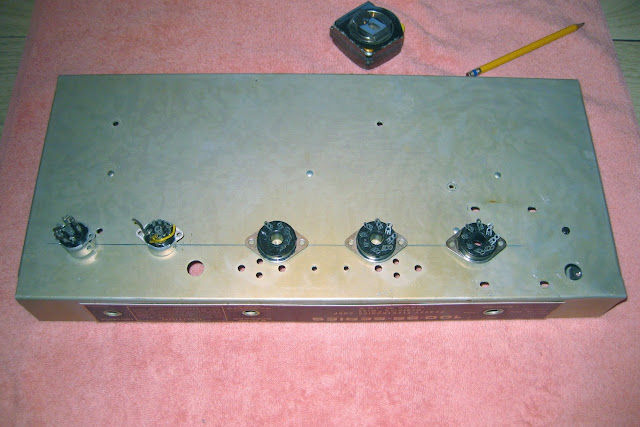 The awful dried up glue on the chassis front was bugging me, but removing it was a chore. 97% alcohol didn't faze it, and neither did GooGone or GoofOff or whatever that household solvent is. In the end, the job needed 3 grades of sandpaper, followed with steel wool, always sanding and scrubbing in the same longitudinal direction: 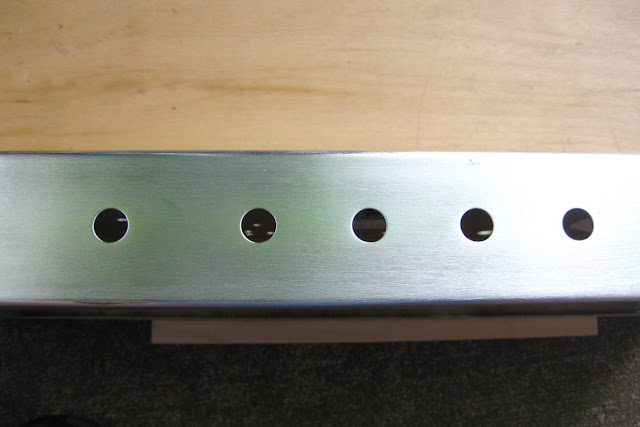 One end of the front of the chassis had gotten whanged in the past; some aggressive sanding made the ding almost gone. Hopefully whatever paint we end up using on the control panel will cover the remnants: 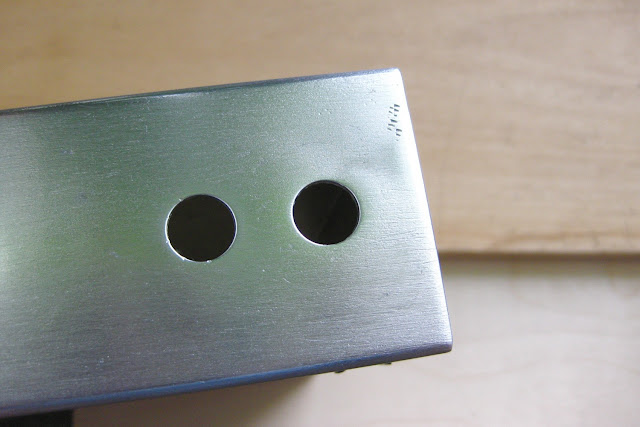 Removing the dried up zombie adhesive took a lot of time and effort - because of that, the rear panel plate will stay on, as is.

A view down at the power indicator lamp end of the front panel: 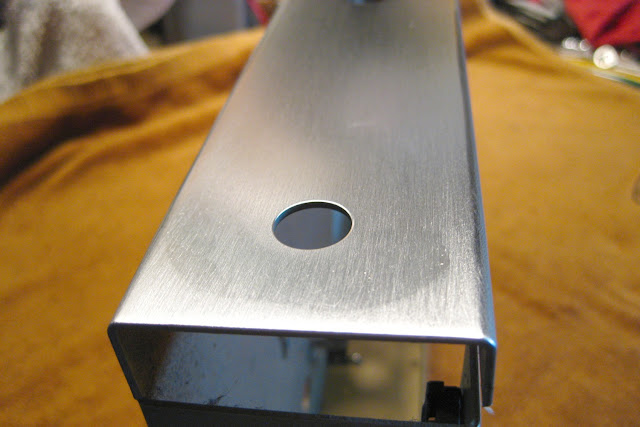 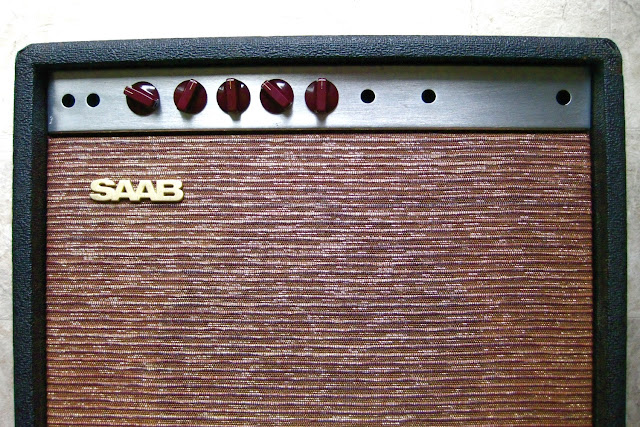 The Saab logo thing, which fell off a 1975 Saab 99 Combi Coupe I used to have, is either a joke, or maybe a keeper.

Okay, that's all folks, until next time, when we start drilling attachment holes in the chassis for the transformers and tube sockets.

For the beginning of this project, see Part 1.