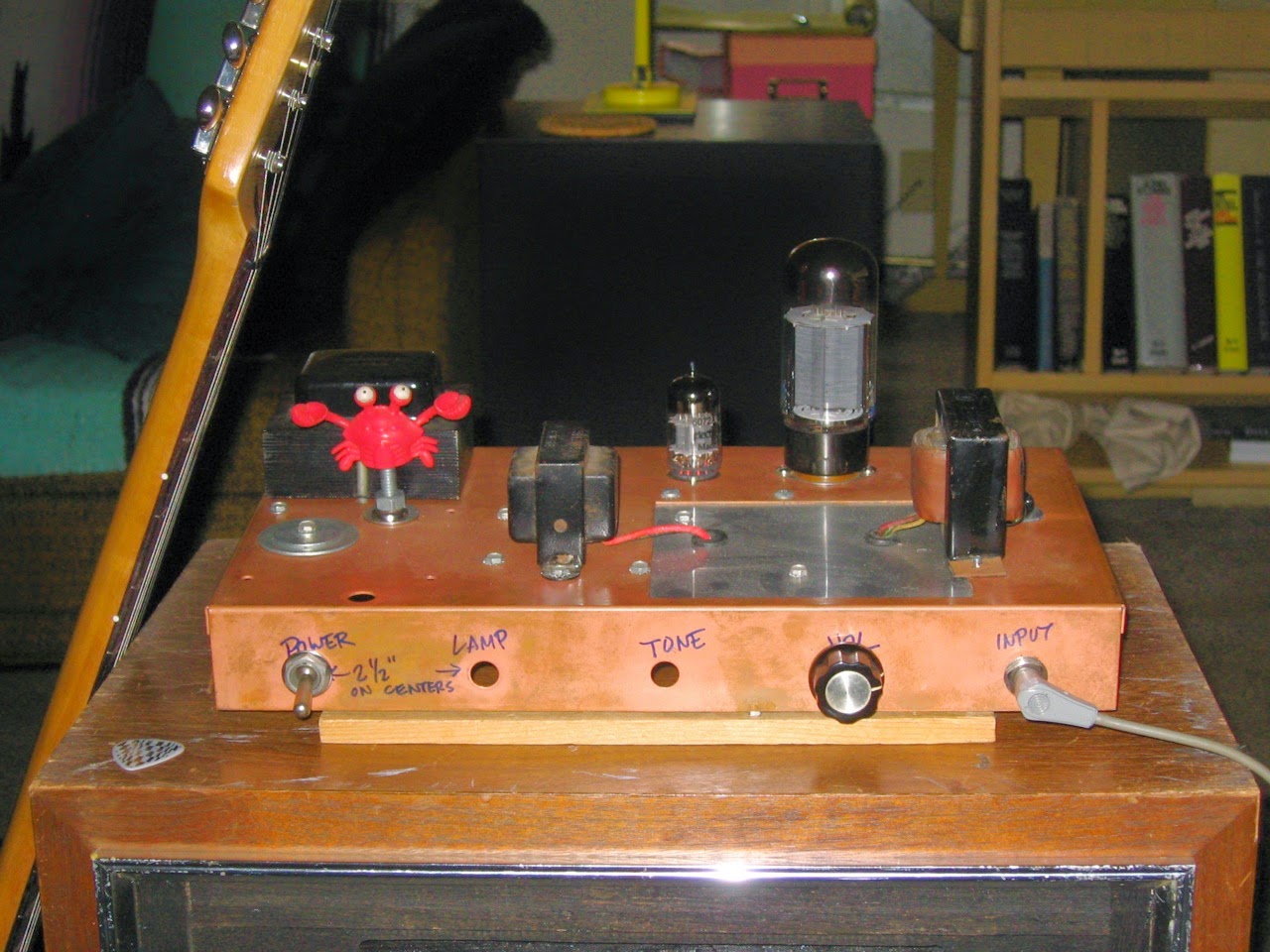 One night, after a couple glasses of Joe's Black Toad, I had a sudden thought: just how inexpensively could a usable and great sounding tube guitar amp be built?

A good place to start might be the classic 1950s Fender Champ Amp circuit. It's simple, which equals cheap, since the component count is low; and depending upon which speaker you run through, it can sound astoundingly good.

So, the goal for a project (as opposed to merely a beer fueled vision) would be to scratch build an amp, which hopefully works, has a tone that is somewhat close to the legendary Champ sound, and - here's the most important criteria - as cheaply as possible. I guess the title of this post kind of gives away the total end cost of this project, and the photo above shows some idea of the amp's beauty factor, which is as low as its price.

Let's talk tone. I've had the good luck to have played through most of the various Champ models that Fender made over the years, as well as a few kit clones and similar amps from other makers. They each have their own flavor, but the baseline tone comes from this basic preamp design:

Actually, the vast majority of all guitar amps ever made, no matter what make or model, have had minor variations of this same basic preamp, and through countless recordings and live performances, it has come to define the sound of the electric guitar. A notable exception was the Vox AC-4, which had an EF86 pentode front end; as well as some lower power US-made amps which used 6AU6 pentode first gain stages. But by and large, the sound we associate with electric guitar is a vacuum tube triode 1st gain stage, followed by a volume control, and then into a 2nd gain stage.

One reason Champs in particular sound so darn good is because their tone is just simply that almost universal guitar tone, but without refinements, effects, tone controls, or cascaded gain stages. A Champ circuit is essentially the basic dual triode tube preamp shown above, with a one-tube single-ended power output section added - no more, no less. It is clean, sweet and chimey at lower volumes, and progressively becomes more raw and edgy as you turn up the knob, finally topping out at a roaring overdrive with a guitar equipped with low output single coils, or a flat-out slamming distortion with humbuckers or higher output singles, all at living room, bedroom, or studio control room levels.

Simple! What we have here are two gain stages, each 1/2 of a 12AX7 dual-triode tube, with a volume pot between them; the 2nd triode stage is also the driver into the 6V6GT power output tube, which connects to the speaker through the output transformer, which is a device that matches the relatively high circuit impedance to a low impedance speaker. Along with the power supply circuitry that provides the voltage and current necessary to operate the amplifier, that's all there is.

And now here's a schematic of that same basic circuit, but with a few changes that were made along the way while putting this project together - it's kind of an "as built" circuit diagram, to use an obscure engineering term. I used to be an obscure engineer: 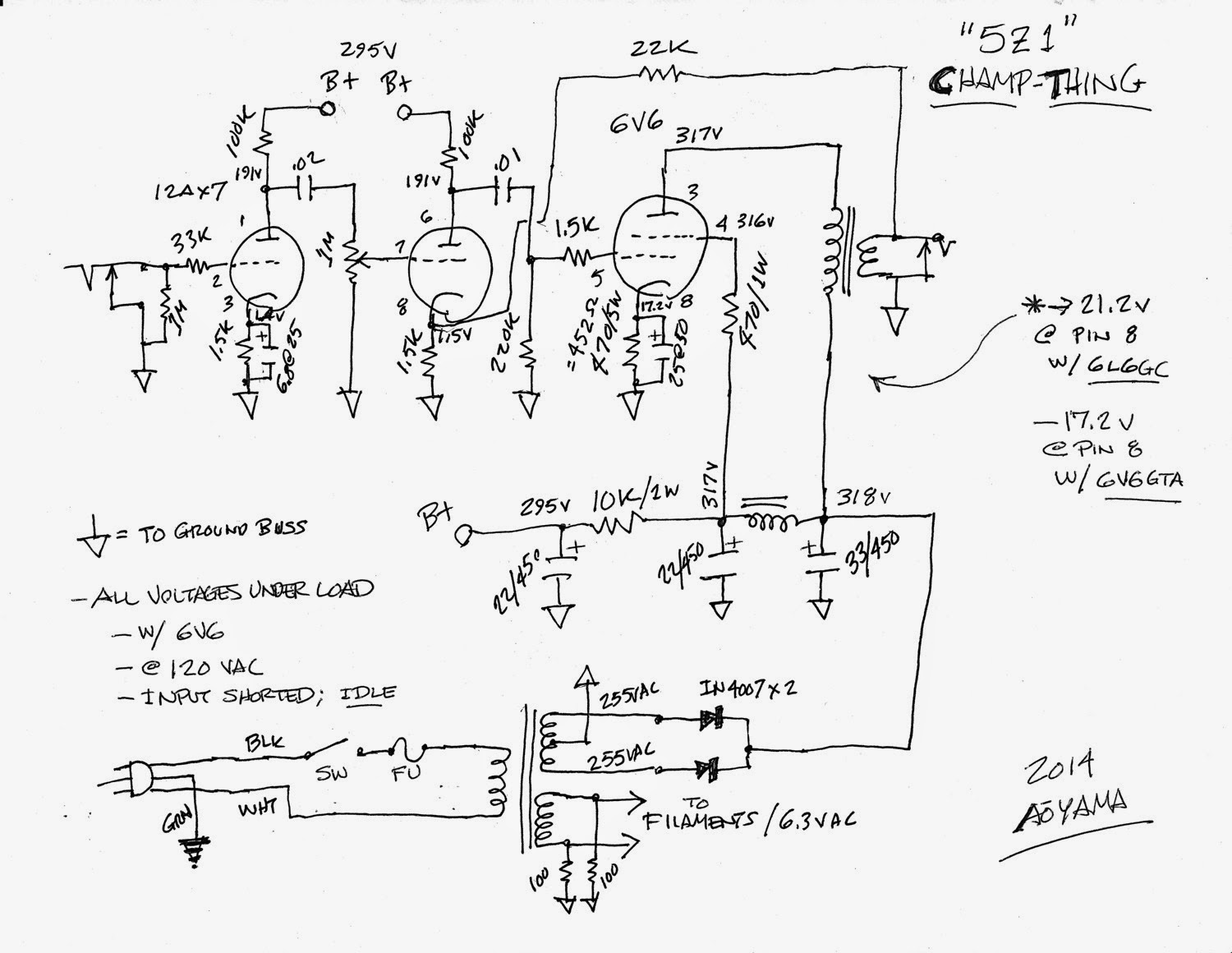 I may have been an engineer, but as you can see, I wasn't an artist - hey, it's freehand. The 5Z1 designation is just some bad humor. Moving on, here are the differences between this circuit and the Fender Tweed 5F1 Champ that it's based on:

• Only one input jack, and one 33K grid stopper resistor going into the first gain stage, which is very close to the 5F1's two 68K resistors in parallel = 34K.

• A 6.8uF cathode bypass capacitor on the first triode section of the 12AX7 reduces the "woof" (unneeded or unwanted low end that can make your guitar tone sound flabby, and sucks power while trying to reproduce a mostly inaudible spectrum), relative to the response of the 25uF cathode bypass cap used in virtually all Fender 1st gain stage preamp tubes.

You may have noticed that most Tweed Champ schematics show no bypass capacitor here at all, but if you look closely at those diagrams, you'll see two dots on either side of the 1.5K resistor. Someone in the past has erased that cap and left the tie points in, and everyone since then has file-shared that schematic, and so it goes. No cathode bypass capacitor at the first gain stage results in less gain, less overall volume, and way less great gritty overdrive when you dime the volume knob - in other words, a Tame Champ - so, let's make sure that cap is in there.

• The 5F1's .02uF coupling capacitor between the plate of the 1st gain stage triode and the volume potentiometer has been reduced to a .01uF, once again to reduce the woofiness a bit, helpful when running any speaker larger than an 8-incher.

• In a nod to the Blackface/Silverface era, I've added a 1.5K grid stopper going into the 6V6 power tube, a 470K on its screen grid, and subbed a choke at the top of the main power supply "Pi" filter, instead of a 10K resistor. The 1.5K and 470K may help out when you run a 6L6 instead of a 6V6 (good to have the choice), and the choke simply reduces hum - always a good thing.

• A 10K resistor instead of a 22K at the second Pi filter ups the voltage at the plates of the 12AX7, which may add headroom. Or it might not, but I like a little more clean before the onset of dirt, and this seems to do the trick.

• The filter cap values are just what I happened to have on hand in the old junk parts bin, and the higher values relative to the 5F1's filters may add to hum reduction, or they might not. Many on-line "experts" claim that higher filter cap values ruin tone, but according to that logic, Bassmans and Marshalls should sound horrible, which of course they don't - they sound awesome.

• There are two IN4007 diodes for rectification (converting AC wall voltage to the DC voltage necessary for the operation of a tube amp), instead of a 5Y3 tube rectifier. The power transformer I have doesn't have the 5V heater filament tap needed to run a rectifier tube such as a 5Y3 or 5AR4. We could have used a rectifier tube with a 6V filament, such as a 6X4, but the few extra volts gained by the use of diodes instead of a tube rectifier is good in this case, since our power transformer has fairly low voltages at its secondary legs (255VAC - 0V - 255VAC).

• The 6.3VAC heater circuit of the .99 Cent Champ is balanced, with both legs referenced to ground via 100 ohm resistors, instead of the single ended filament supply circuit in the original Champ. Per conventional wisdom, this also reduces hum; I happened to have a couple 100 ohmers on hand, so why not?

• Finally, the AC power cable is a modern 3-conducter with ground, and there is no .05uF "death cap" (see 5F1 schematic above) referencing one leg of the AC to the chassis, along the cable to your guitar and through the strings to your hands, and heart. When I was just starting to play electric guitar, I almost died as a result of the deadly combination of a stock '50s Fender amp and a club's improperly wired sound system. A shocking experience, which I survived; Les Harvey and others weren't so lucky.

After some years of messing around with tube amps, I've ended up with a couple small bins of old but still useful parts - resistors and capacitors in new or good used shape, some tubes and sockets, jacks, switches, left over wire, etc. I've also been lucky in knowing a couple of like-minded tube amp nuts, and I was able to rummage through their scrap piles and slip a few things into my pocket when they weren't looking, or actively distracted: "Whoa - is that an unopened beer over there?"  "Where?!?" 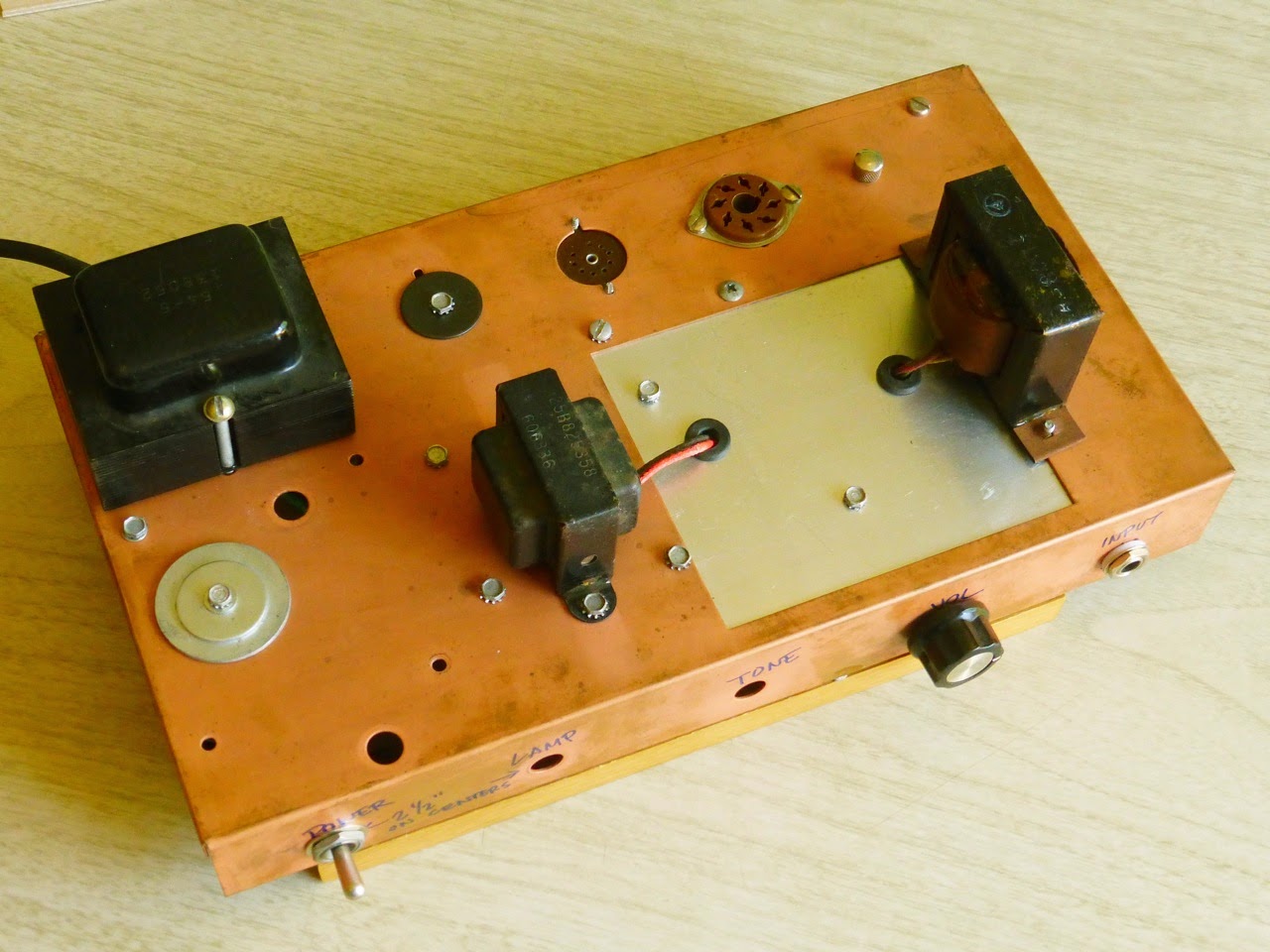 After a period of scrounging around, I ended up with a small pile of cool old junk. The copper coated chassis came from some kind of ancient tube powered test equipment, as did the power transformer. The paper interleaved output transformer is from a 1950s organ amp that had four 6K6 output tubes in push pull parallel. I stared at the RCA Tube Manual until I got a headache, and finally decided that, with its center tap unconnected, it could handle one single ended 6V6, or even a 6L6, just fine.

I had some old 1/4" jacks, a fuse holder, some terminal strips and a switch laying around, and a good clean used octal socket, as well as (very important) a little red rubber lobster. So far, everything's been free. Here's where the 99 cents in the title of this post comes from: Gene, Glenn, and Linda at Thompson's Electronics, the greatest used and vintage Hi-Fi store anywhere around here and maybe anywhere, had a brand new but really old phenolic 9-pin socket for the 12AX7, and it cost... $.99.

In Part 2, we'll continue on, and try to make some kind of order out of this mess of old rusty parts, look at component placement and layout of the wiring, and discuss how a schematic circuit diagram gets turned into a wired up amp that, hopefully, works. Stay tuned.


All photos in this post taken with either a Canon Elph SD-550, or a Lumix ZS-25
Click or tap on any photo to go to a higher resolution (larger) image