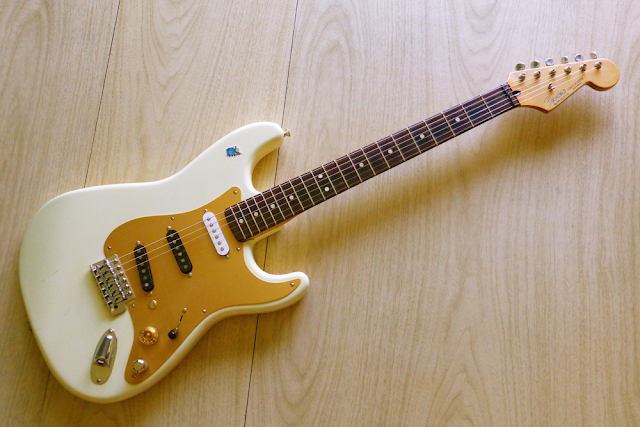 My friend David acquired a 1991 Fender Strat with a strange history - someone had covered the entire guitar in white latex house paint. Literally every part of it: body, pickguard, pickups, neck, fingerboard, everything - it was like a "ghost" guitar or something. The guitar's next owner had done a good job removing most of the paint, and when I first saw it, there were only a few traces left, deep within the grain of the rosewood fingerboard and in various spots among the bridge saddles. David, however, is a very thorough kind of guy, and when he's done with any project, it's as perfect as possible; when he acquired the Strat, he tore it completely apart and really gave it a good cleaning. Now, there are no traces of its former Sherwin Williams paint job.

While this MIM (made in Mexico) Stratocaster was apart, David also made a lot of improvements to it: he completely shielded the pickup cavities in copper foil, installed a toneful brass tremolo block, replaced the pickguard with a mint-colored Allparts loaded with Squier Classic Vibe alnico pickups, and shaped and fitted a new nut made of some modern super slippery material. On top of that, he did a complete fingerboard setup - leveled and recrowned the frets, beveled and smoothed each fret end, and even rolled the edges of the rosewood fingerboard. The result was nothing short of the finest playing Strat I'd ever had my hands on, and I've played more than a few. David also shined up the original Beach Boys White body paint and buffed up the finish on the neck, so the guitar now looked as nice as it played.

I guess it's just in my nature to mess things up - soon after buying it from him a few months ago (wait, I forgot to mention that part; well, I did), I took it apart again and started changing things. That's one of the cool things about Fenders and Fender clones - there's literally thousands of different parts and ways you can mod them to suit your own taste. The first thing I did was to remove the original cast tuning machines (most likely made by Ping and actually quite good quality), and replace them with a set of vintage type gears. Gotoh in Japan makes some Kluson style tuners that are probably hands down the finest ever made - smooth, stable, and with immaculate fit and finish.


This next picture shows the original tuners removed, and guide lines penciled in to mark out the placement of the holes for the screws that will hold the new tuners in place. At this point, the pilot punches are in already, and it's ready for some careful drilling: 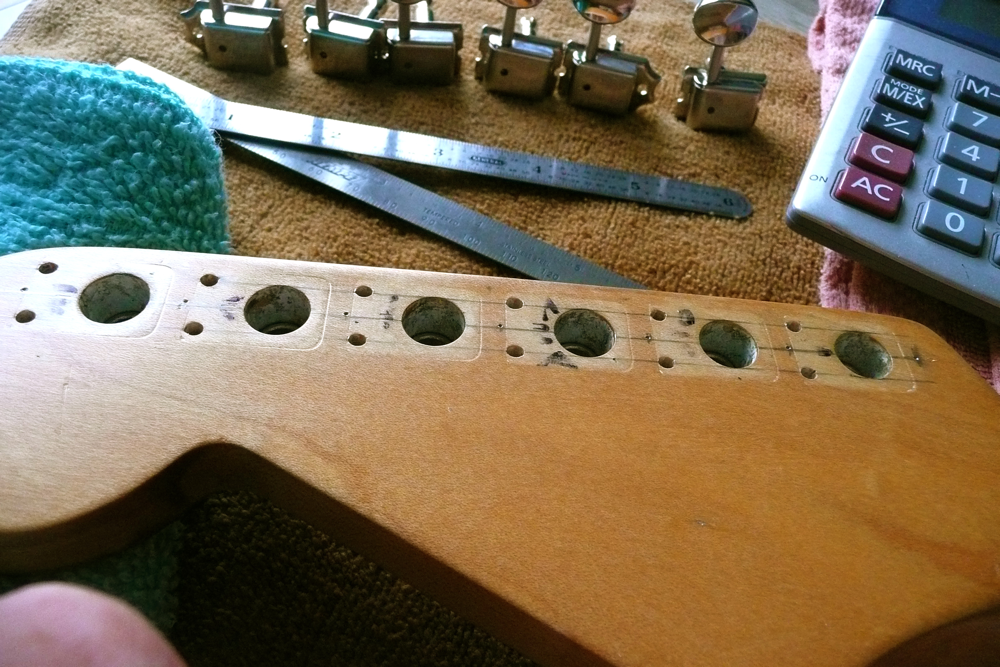 Next step is installing the replacement bushings. Also known as oversize or conversion bushings, they're made to retrofit vintage type tuners with 1/4" shafts into headstocks that have been drilled to the larger size that newer style tuners require. They're the press-fit type, and a piece of 1" pine lath on either side of the headstock (to protect the finish on both the tuners and the headstock) and a C-clamp did the trick to press each bushing in individually, slowly and carefully.

These bushings, from Stewart MacDonald, had a sort of fakey "antique" finish on them, and before installing had to be scrubbed a bit with a scouring pad to get it down to something that looked okay. Those antique-y finishes look really obviously phony, and just plain nickel gets a nice patina over time anyway, so why bother? Yeah, I hate acid-washed jeans, too. Anyway, note the really deep divots left by the previous tuning machines' large washers - newer style cast tuners have a top nut, and they had obviously been torqued down pretty hard: 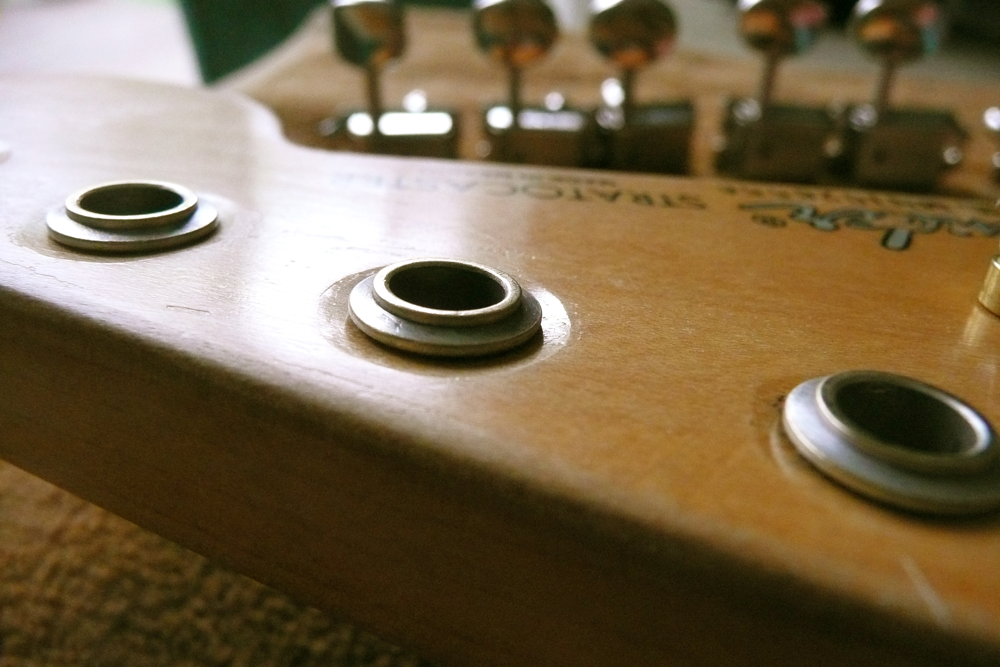 This Strat didn't have a height spacer for the string guide (also known as a string tree), and without one the string break-over angle past the nut was a bit severe. The local music store had the modern black plastic spacers in stock, and I bought a couple anyway, just in case, but didn't use them - black plastic, on an old Strat? I also picked up a good cheap $5.00 pickup there, which you can read about in Part 3.

The big-box chain music place (won't mention the name, but it rhymes with "Guitar Center") had nothing at all, as usual, waste of a trip. Since they didn't have any Strat guide spacers, I asked whether they had any of the old-style round Tele string guides, which have a higher string height built in. The sales guy got all huffy: "Won't work with a tremolo! Tuning problems! Doesn't look right on a Strat! Use the right part!" What? Jeez, I was just asking. They didn't have the "right part" for my Strat anyway, so what's the big deal? It's also hilarious getting lectured by a teenager - my entertainment for the day, but still no height spacer.

Not wanting to wait for mail-order, I used a component of a bicycle chain, which fits perfectly, and looks good. This piece is called a roller, from the wider type of chain made for single speed and fixed gear bikes, and now the break-over angles of all the unwound strings are very similar, if you do the old Tele trick of winding as much string as possible on the G post (more about that later): 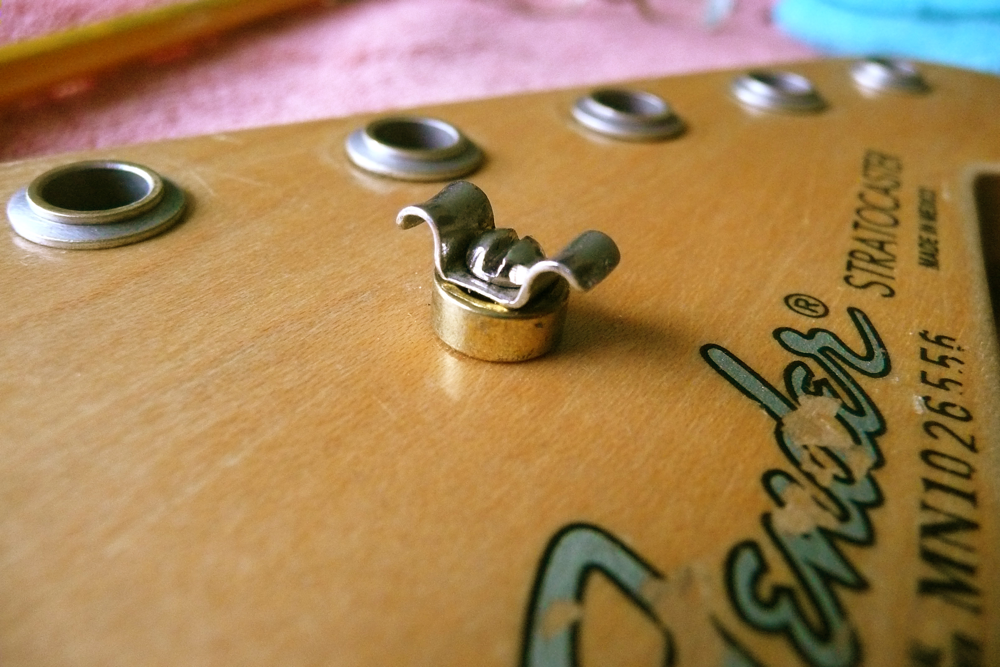 In the picture above, you can see that some of the logo decal had come off when the white latex paint was peeled off; it's amazing that most of it survived.

Okay, almost done; in the next photo, the Gotoh gears are now installed. The trick here is to get the bodies of the tuners aligned as closely as possible; it's not perfect, but as near as I can get. These are some seriously fine looking gears! This shot also shows one of my fetishes, which is to use slotted head screws; as everyone knows, they make your guitar sound better (just kidding): 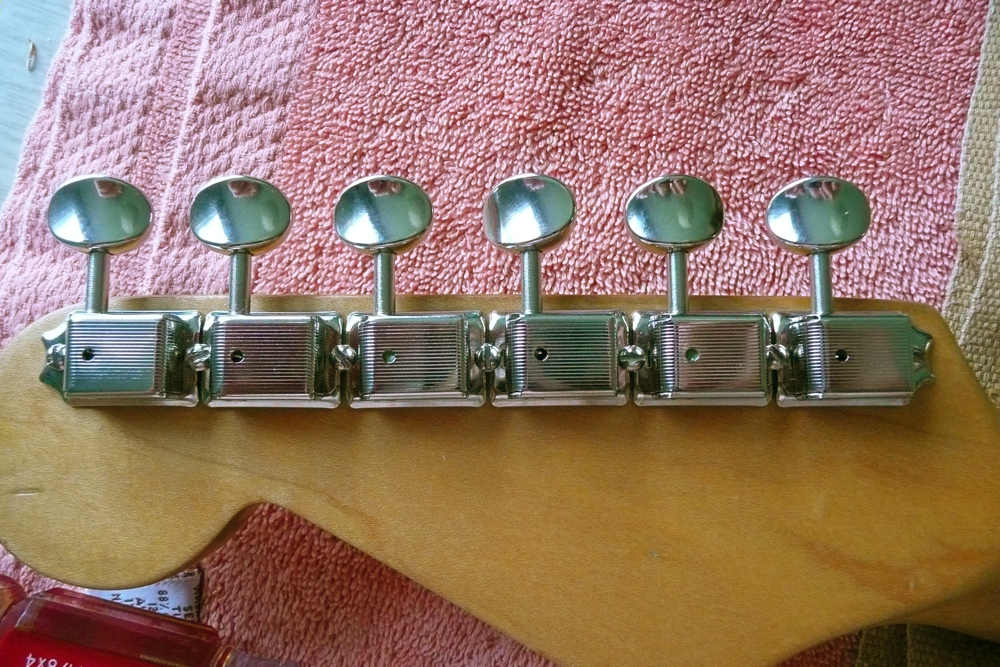 Here's the top view; not bad looking at all, and luckily it all turned out well. Off to the right, you can see the great looking nut that David cut, shaped, installed, and filed down - nice work: 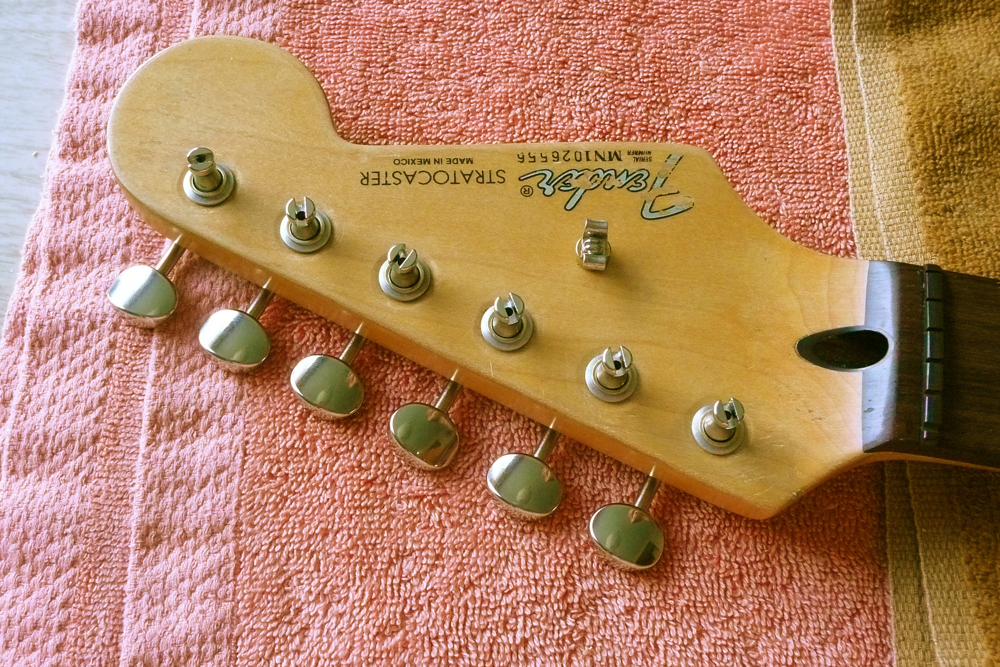 One last shot, showing the string break-over angles past the nut, and approximately how much of the 3rd string to leave not wound around the post, in order to get that G string down low. As you can see, another 1+ wrap would have fit around the post, but it's a guess-timate thing. And, yeah, maybe I could have used two string guides, like the newer Strats, but doing that makes the headstock look cluttered, and adds to whammy bar related tuning problems. In any case, now all three of the unwound strings have very similar break-over angles, and therefore about the same tension over the nut, which may be a good thing: 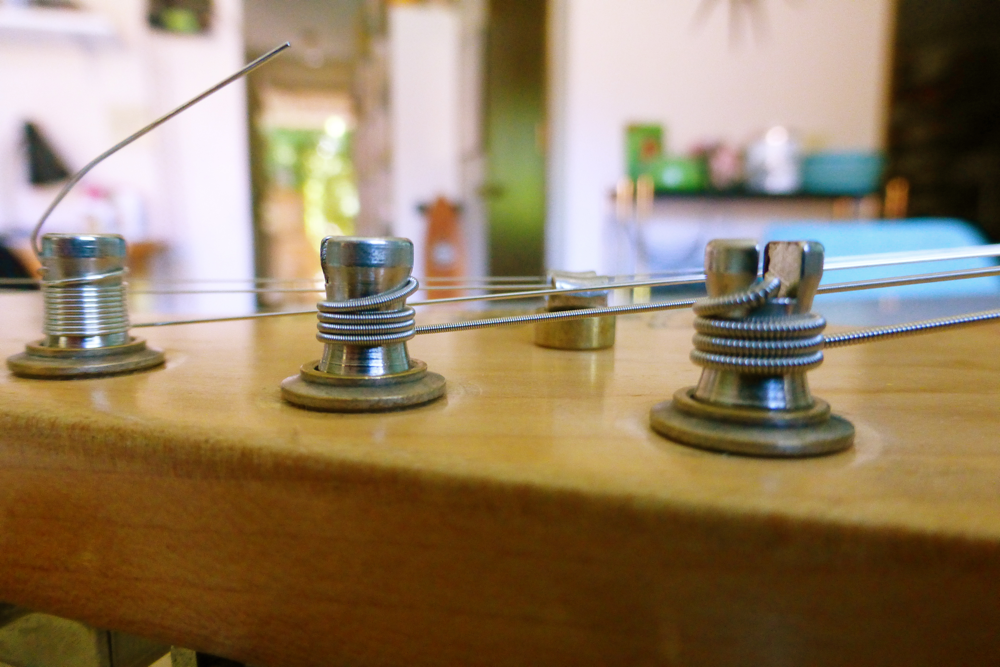 Next time, messing with the paint, pickups, wiring, and more.  To be continued in Part 2, and Part 3.

All photos taken with either a Lumix ZS-25 or a Lumix TZ-3.  Click or tap on any picture above to see larger images.