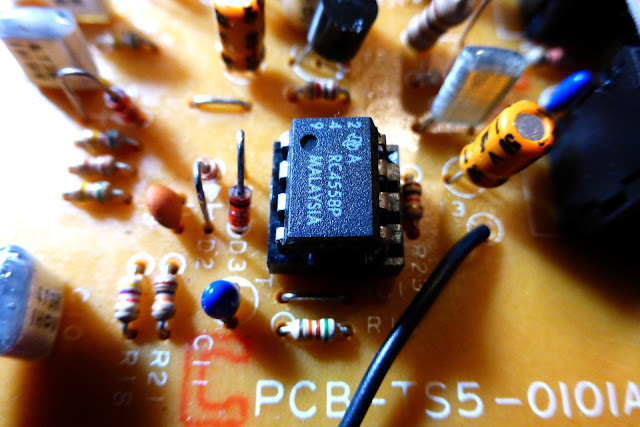 One sort of thing we have here at the Alley Gadget Shop is gadgets. Lots of them. Everything from a small, beautifully hand forged cable pulley made for an ancient French bicycle, to odd assorted guitar parts, obsolete Macintosh computers, and old tube amps and other vintage audio gear from the last century. Some work, most need repair, and a few are unfixable; and whatever is really dead often gets repurposed or dismantled for usable parts rather than just getting tossed.

Case in point was an interesting (and ugly) looking but totally defunct audio unit from the 1980s. Didn't work, no way it was ever going to be fixed, so we poked around for salvageable stuff. Besides a power cable, fuse holder, knobs and some assorted oddments, there were a few various integrated circuit chips, all in sockets. Most were 4558 type dual operational amplifier (opamp) ICs. 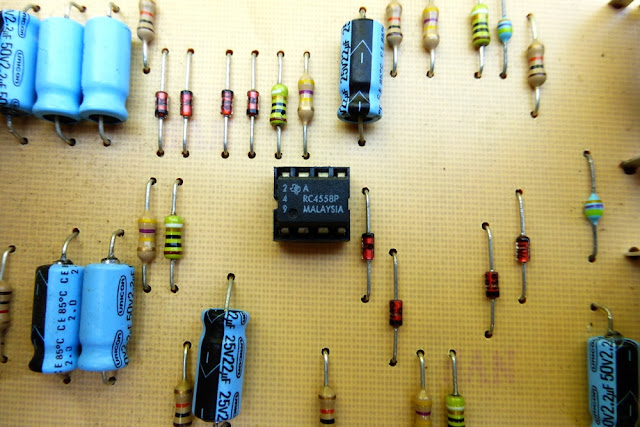 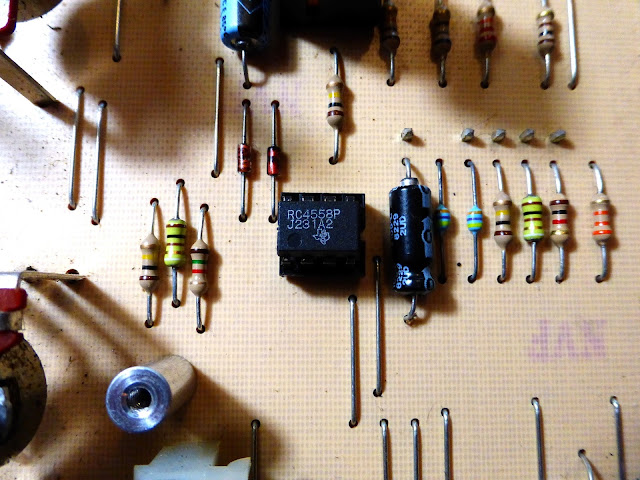 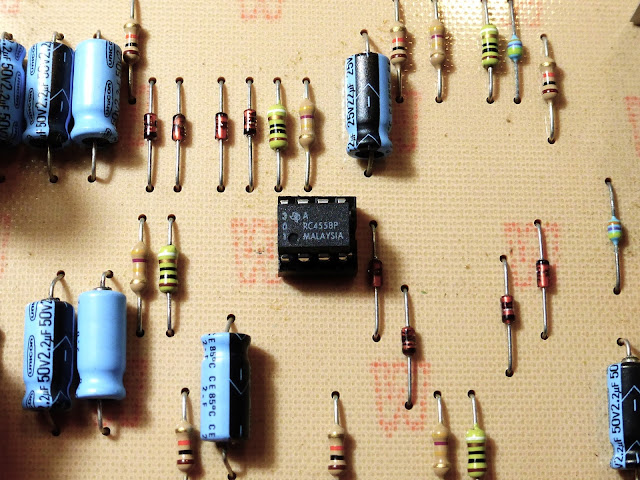 Other component manufacture date codes in this circuit, all from mid '82 to early '83, and a QC sticker on the chassis dated April 1983, correlates with the IC codes.

It might be a good idea to test those ICs, and see what shape they're in. But how?

Hanging around the audio and art production space at the ol' Gadget Shop, is a mid-'90s Ibanez TS5 Soundtank series Tube Screamer, with TS808 circuit mods expertly done by David in Massachusetts. It's as good as any Screamer I've ever plugged into, tonally indistinguishable from the really great sounding 808 T.S. section in a stock early '80s Ibanez UE 300 multi-effector I happen to own and use. 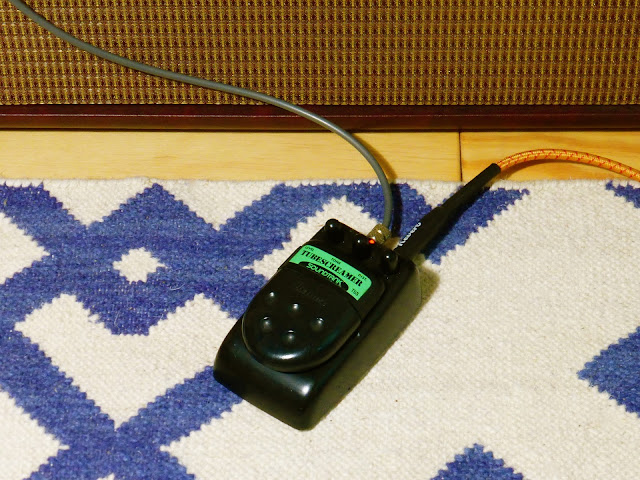 When he did the mods, David installed a socket for the 4558 IC, and popped in a newer production TI RC4558P: 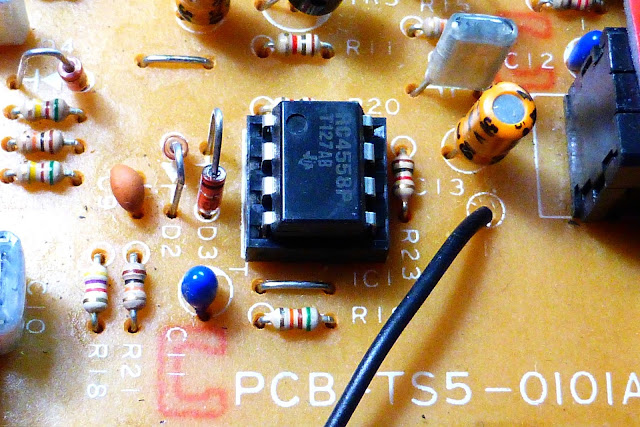 This makes it easy try out different ICs, and we took advantage of the socket to perform real time audio functionality testing on the three different sub-types of the Texas Instruments RC4558P that were salvaged.

To make a handy temporary test rig, the bottom plate and the control knobs were removed from the modded TS5 Tube Screamer, and the component board dropped smoothly away from the pedal body, allowing easy access to the IC socket: 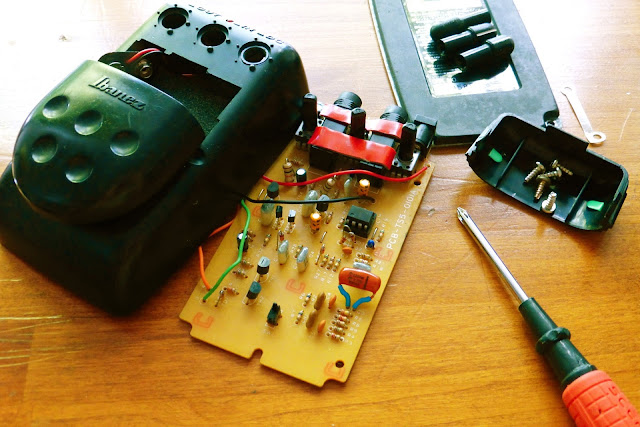 An AC adapter was plugged in, the Screamer's output hooked up to an amp, and one by one we tested 24 RC4558P opamp ICs, including the one already in the TS5, while playing a variety of diverse sounding guitars: 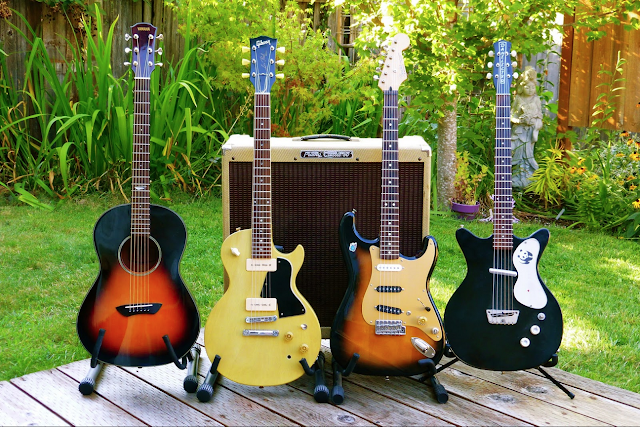 We didn't bother reassembling the TS5 between each RC4558P test - just turned the amp volume down, shut off the AC strip the pedal power supply was plugged into, swapped the chip, and powered it all back on again. This way, testing impressions stayed fresh from chip to chip - it took longer to switch guitars than it did ICs. 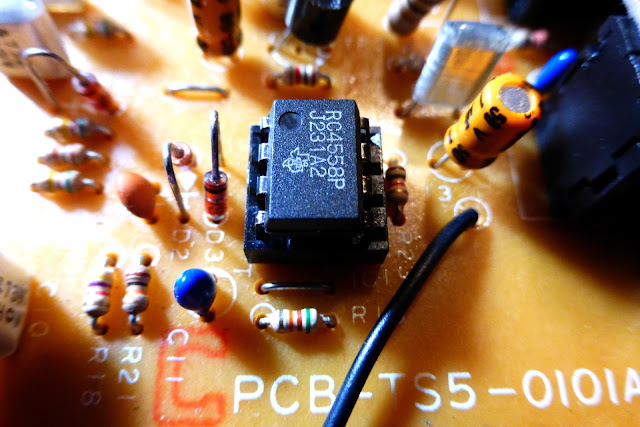 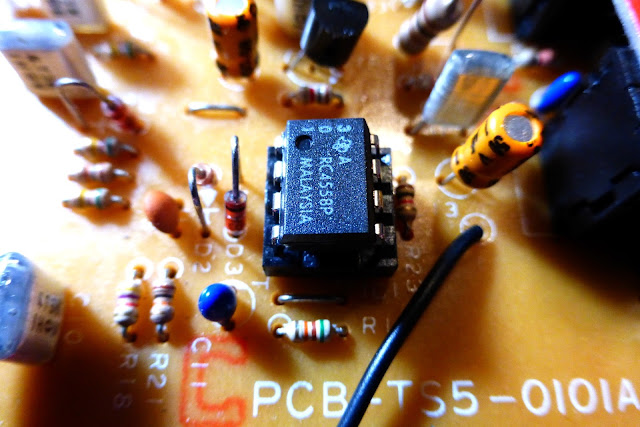 Test Results, and a Cold Marguerita

Obviously, doing real time in-circuit testing of dual opamps, using an improvised and fairly inexpensive test rig, is by its nature non-scientific - we're not going to get any key parameter measurements like Vos, CMRR, Iq, etc. Our main goal was operational functionality testing - does a particular IC actually work, without any issues, in a typical example of a well known overdrive pedal circuit?

1) With only one failure, all of the opamp ICs evaluated checked out okay, with the TS5's overdrive effect behaving itself in a predictable manner throughout the range of each of the three control pots.
2) All four TI RC4558P variants sounded fine in-circuit, with no fatal audio flaws: tonal and/or level degradation, glitches, or weird sonic artifacts.
3) There appeared to be very subtle audio differences between the four sub types of TI RC4558P we had, mainly in the overall amplification levels and possibly slightly differing low-end coloration. A couple times we went back and did multiple A/B comparisons between two particular ICs, just to make sure we weren't imagining those slight variations.

It might have been nice to have other brands, sub types and eras of 4558 chips, in order to compare them with the 1980s Texas Instruments ICs on hand. Possibly 4558s from other makers might have differing audio characteristics, and that's an idea for further testing in the future. But heck, forget about all that. It's late afternoon on a gorgeous and hot summer day - doesn't a nice cold marguerita sound like just the thing right now? 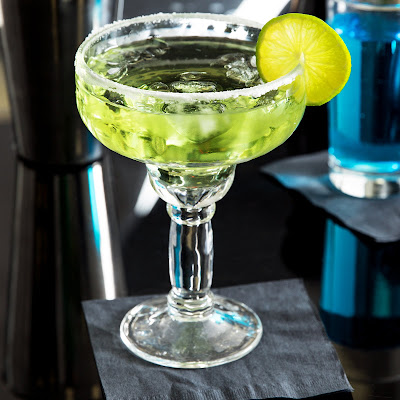 
If you're at all interested in obtaining one or more of the vintage 1980s Texas Instruments RC4558P tested in the above article, please consider going over to the right hand sidebar of this blog, find the orange rectangle, and click through to the Alley Gadget Shop's internet store at Reverb.

Note: as of July 2021, all of the vintage TI RC4558P ICs for sale had been sold. I hope everyone who acquired one is having fun with pedal projects!