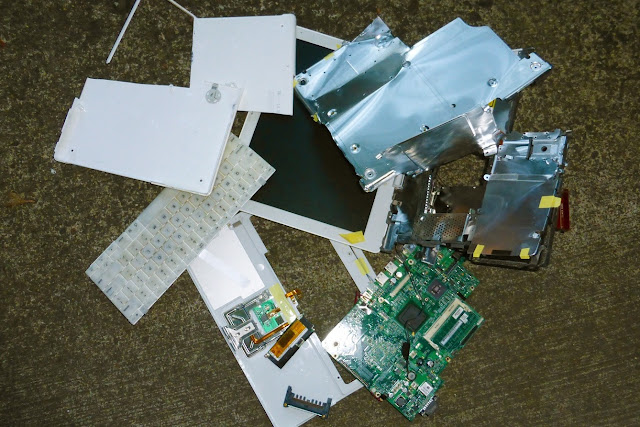 We've had an old iBook laying around unused for some years. It was on the shelf next to the stereo for awhile, as an on-line and mp3 music server, but one day it couldn't do YouTubes anymore, so it's been sitting out in the garage ever since. A couple weeks ago I had the idea to remove the hard drive, and donate the rest of the iBook to the local tech recycling place.

Got on iFixit, went to the iBook disassembly procedure and got started. But. Someone had been in there before me, and a few of the screws had stripped heads. What to do? If they were bigger, I could use "easy-outs", but these were so tiny that not even Donald Trump's odd tiny T-Rex sized arms and hands could have gotten a grip on them, assuming he had ever learned to use a screwdriver ("Believe me, nobody knows more about screwdrivers than me!!", holds the wrong end...). A quick bright idea: really carefully drilling out the heads with a new, hard bit. That worked, but heck, the shanks were still down in their holes, nixing any thought of reassembly; so, not so bright.

What happened next I didn't even think about: grabbing a small pry bar and a big screwdriver, I proceeded to dismantle the old laptop gorilla style, prising into and under panels and boards, and grabbing, yanking, and tossing the pieces out the open garage door, onto the driveway. Then I screwed the disc drive onto a pine board, got out the Bosch 1/2" hammer drill and tore its guts out, and did a long arcing 2-pointer right smack dab into the middle of the hoop trash can. Swept the dead tech bits into a pile and took a picture. Went and grabbed a beer, and sat at the workbench again, admiring my handiwork - a job well done!

All the other iBook bits went into the trash, too. Oh sure, the "right" thing would have been to take it all in a bag to the recycling place and paid their, what, $20.00 (?) haz waste recycling fee, but a) 20 bucks buys a lot more beer, and b) what few heavy metals and toxic materials there may be in this little obso-Mac is going to the land fill to join the 93 million metric tons of baby-poop filled disposable diapers and kitty litter that's already there.

No, I ain't no hero, but I didn't ask to be born into this particular point in the Earth's story arc. At least I don't have a bunch of old junk cars with MAGA bumper stickers, sitting around my trailer out in the country. Just six or seven cool old bikes hanging from the garage ceiling, and I recycle all of my micro brew bottles.