I Met A Color Changing Spider 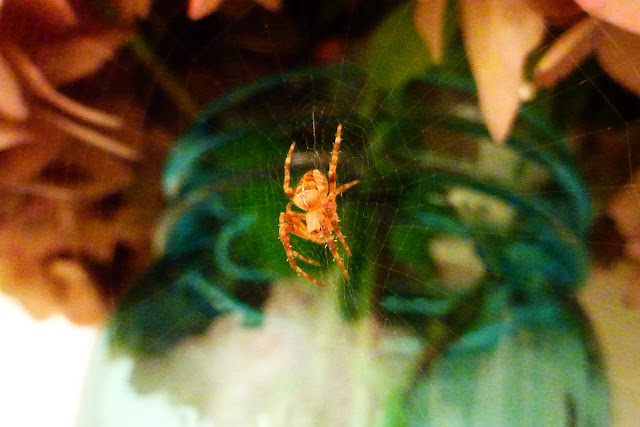 A couple of weeks ago, we brought some past their prime hydrangea blooms inside, and put one bunch of them in an old colored pickling jar, and placed that on a shelf in the downstairs restroom, as a decoration. This room is known facetiously in the realty trade as a "1/2 Bathroom", although of course, no bathtub. I guess you could take a sort of a bath in the sink, but that seems tedious.

A few days later, I noticed that a spider had built a web between a hydrangea flower and the shelf; looking closer I saw that it was one of those spiders you see in the garden that have an adaptive color changing capability. We've seen these same critters in the back yard almost totally white, inside a Star Gazer lily, and mostly dark-brown, hanging around the seed cluster of a sunflower. Friends say they're called Orb Weaver spiders, but maybe the ones we have aren't. Got the camera, took a couple shots, and then let the spider be - maybe it would pick off a couple mosquitoes. 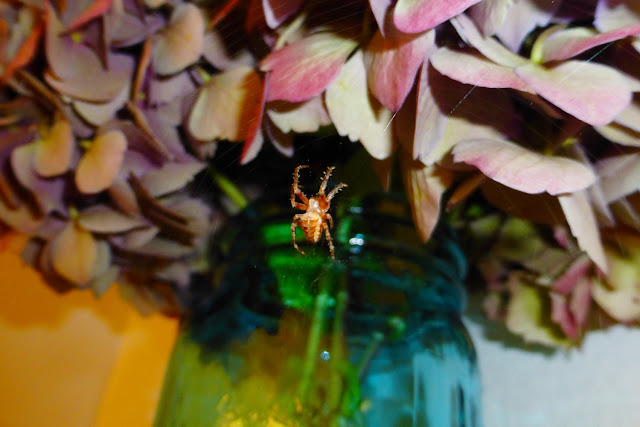 Pretty cool colors, huh? Anyway, to get on with this story (and if you have a fear of spiders or bugs in general, please stop reading this post, right now):

Maybe a week later I went into the restroom to straighten up a bit and do some light cleaning. Bent down to pick up the waste bin near the toilet, and as I was walking out it felt like a leaf had fallen onto the top of my head, which was impossible, so I ignored it. Maybe an hour after that, I sat down at the office desk with a hot cup, turned on the iMac, and checked emails and made a quick run through of my usual morning go-to web sites, while sipping what Captain Picard would call "Tea. Earl Grey. Hot." Once, I felt a tickling on my neck, next to the shirt collar; scratched it a bit, then hit another bookmark and kept reading. Later it felt like something was moving on the left side of my head - I instinctively did a brushing away motion, and then heard something small go "plop", right into the now empty tea cup. Looked down into it, and sure enough - there was that little color changing spider.

I should have grabbed a phone or camera and taken a picture, but I didn't; it would have made this story complete. My first impulse was to quickly pick up the cup, walk out into the back yard, and hold it next to another hydrangea bloom. The spider rather calmly (or so it seemed) walked right onto the rim of the cup and settled on a petal, staying motionless for a bit. I imagine it's out there still, or, since it's been getting chillier at night lately, done whatever these creatures do to prepare for the coming winter. I hope it's been getting plenty to eat. Especially if it's mosquitoes.