Kirk Douglas on The Road Ahead 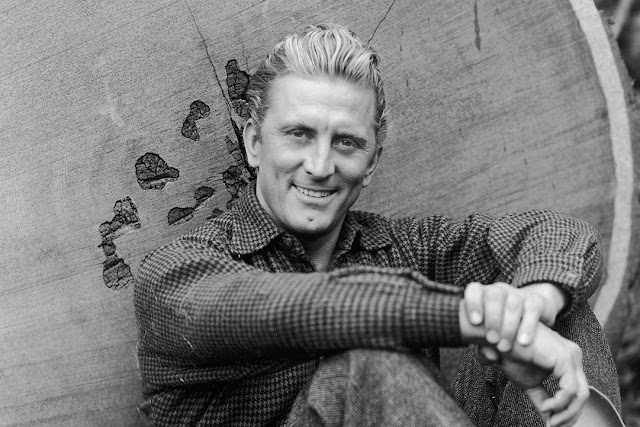 Today, Sunday, October 9, 2016, a lot of us are obsessing on some of the more titillating political gossip, and to a lesser extent, tonight's second presidential debate. There isn't going to be a lot of movement in public perception until tomorrow morning; in the meantime, here are a few words of wisdom from someone who has been a witness to history, and been a part of it as well:

I have always been deeply proud to be an American. In the time I have left, I pray that will never change. I am in my 100th year. When I was born in 1916 in Amsterdam, New York, Woodrow Wilson was our president.

My parents, who could not speak or write English, were emigrants from Russia. They were part of a wave of more than two million Jews that fled the Czar’s murderous pogroms at the beginning of the 20th Century. They sought a better life for their family in a magical country where, they believed, the streets were literally paved with gold.

What they did not realize until after they arrived was that those beautiful words carved into the Statute of Liberty in New York Harbor: “Give me your tired, your poor, your huddled masses, yearning to breathe free,” did not apply equally to all new Americans. Russians, Poles, Italians, Irish and, particularly Catholics and Jews, felt the stigma of being treated as aliens, as foreigners who would never become “real Americans.”

They say there is nothing new under the sun. Since I was born, our planet has traveled around it one hundred times. With each orbit, I’ve watched our country and our world evolve in ways that would have been unimaginable to my parents – and continue to amaze me with each passing year.

In my lifetime, American women won the right to vote, and one is finally the candidate of a major political party.An Irish-American Catholic became president. Perhaps, most incredibly, an African-American is our president today.

The longer I’ve lived, the less I’ve been surprised by the inevitability of change, and how I’ve rejoiced that so many of the changes I’ve seen have been good.

Yet, I’ve also lived through the horrors of a Great Depression and two World Wars, the second of which was started by a man who promised that he would restore his country it to its former greatness. I was 16 when that man came to power in 1933. For almost a decade before his rise he was laughed at ― not taken seriously. He was seen as a buffoon who couldn’t possibly deceive an educated, civilized population with his nationalistic, hateful rhetoric.

The “experts” dismissed him as a joke. They were wrong.

A few weeks ago we heard words spoken in Arizona that my wife, Anne, who grew up in Germany, said chilled her to the bone. They could also have been spoken in 1933:

“We also have to be honest about the fact that not everyone who seeks to join our country will be able to successfully assimilate. It is our right as a sovereign nation to choose immigrants that we think are the likeliest to thrive and flourish here…[including] new screening tests for all applicants that include an ideological certification to make sure that those we are admitting to our country share our values…”

These are not the American values that we fought in World War II to protect. Until now, I believed I had finally seen everything under the sun. But this was the kind of fear-mongering I have never before witnessed from a major U.S. presidential candidate in my lifetime.

All of us still yearn to remain free. It is what we stand for as a country. I have always been deeply proud to be an American. In the time I have left, I pray that will never change. In our democracy, the decision to remain free is ours to make.

My 100th birthday is exactly one month and one day after the next presidential election. I’d like to celebrate it by blowing out the candles on my cake, then whistling “Happy Days Are Here Again.”

As my beloved friend Lauren Bacall once said, “You know how to whistle don’t you? You just put your lips together and blow.”

Kirk Douglas is a contributor to The Huffington Post, where this article was originally published.