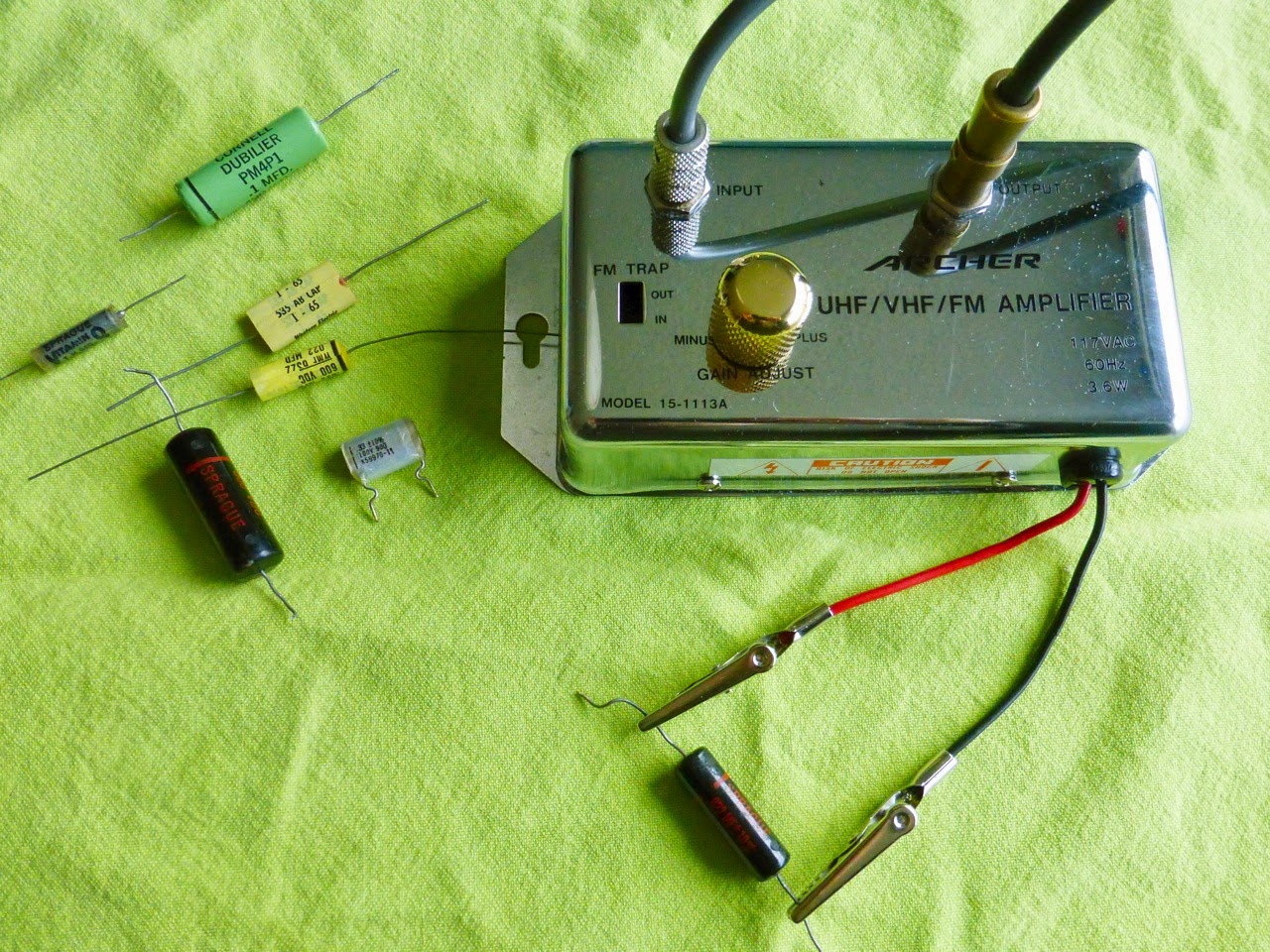 Like most players, I never thought much about guitar volume and tone controls, until one night, just before a concert gig in Maastricht, Nederlands, my main guitar started making loud scratchy noises, and suddenly went dead.  Only minutes before the show and desperate, I took the control plate off, bypassed the pots, and wired the switch straight to the output jack.  During our set, I was surprised at how much better the guitar sounded - more highs and lows, more volume, and overall a crisper, toneful, and more dynamic sound.  Ever since then, most of my guitars have had no tone control.

Last year I bought a Strat from David, and he gave me an old tone capacitor to try out with it - an ancient paper in oil cap that many people call a "Bumblebee", and it sounded amazing.  Instead of just rolling off the highs, the tone control had a sweep that was almost like a wah pedal, and within that range were some surprisingly good and useful tones.

I should have kept that 'Bee cap, but I had already committed to selling the Strat's pickguard assembly, and that capacitor stayed in there.  Lately, I've been thinking about the sound it had, and now it's time for a tone pot in the Strat-O-Parts-O-Caster.  But first, it would be fun to test out a few different caps and hopefully find the one with the Golden Tone.  David agreed, and he contributed a few to try out: 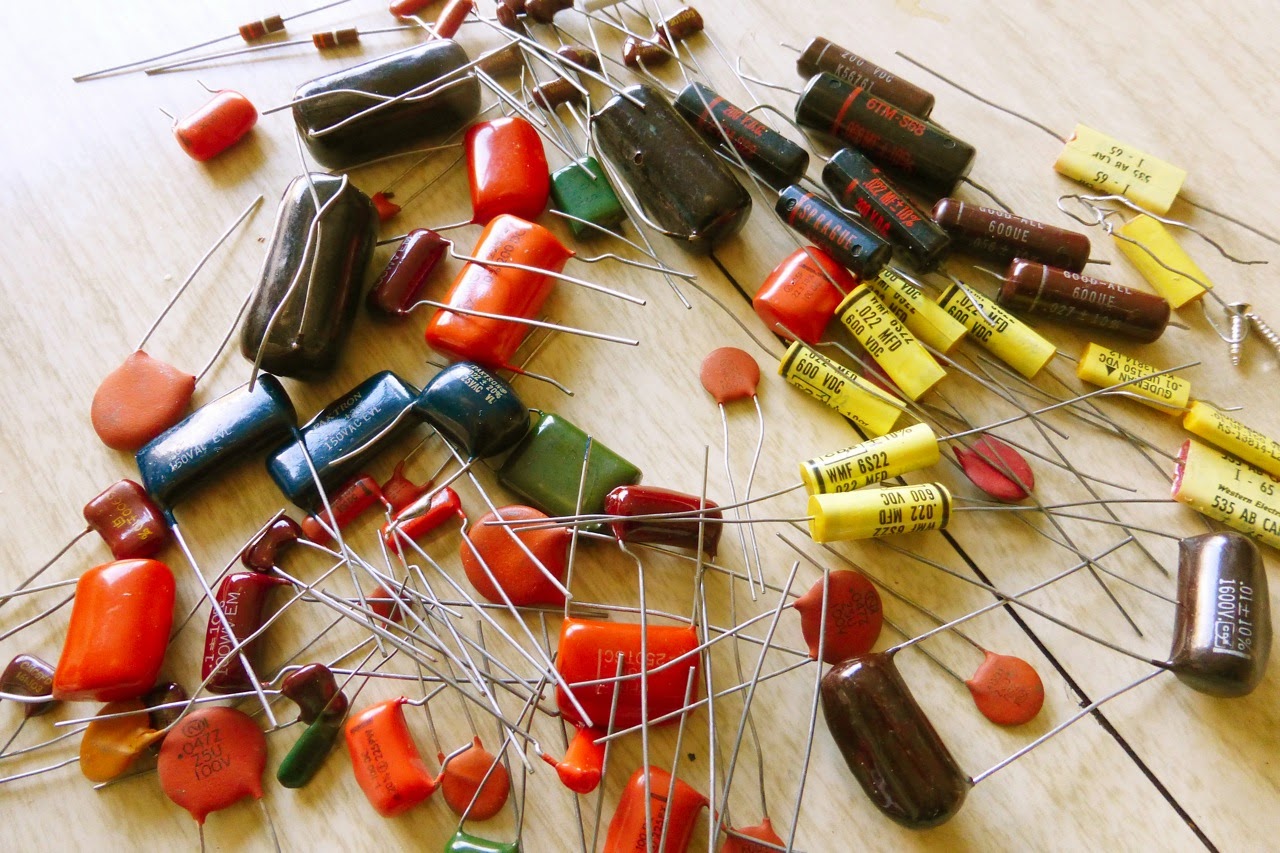 I already had a small pile of new and old caps: 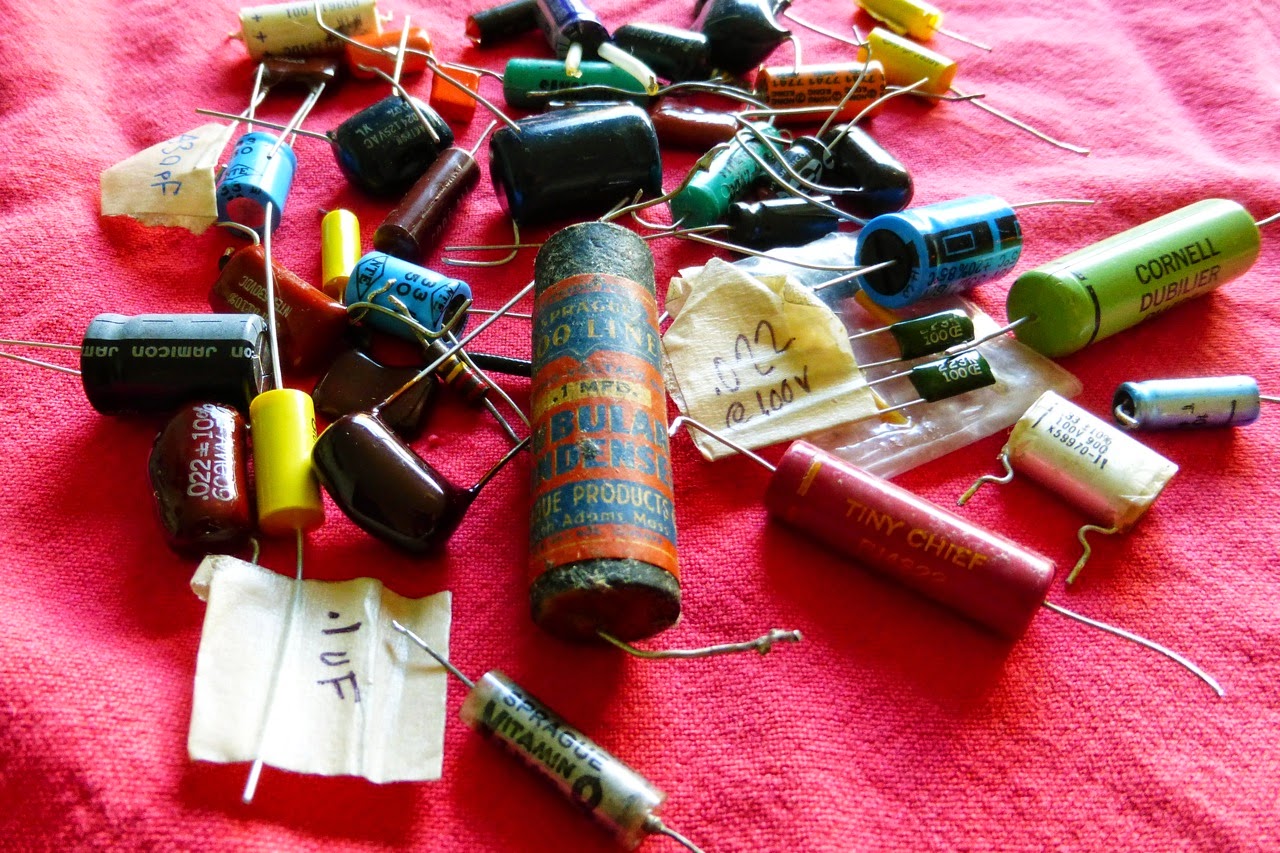 Okay, already that's way too many capacitors.  Luckily, most of these caps have values that place them out of the useful range for guitar tone circuits, which is from around .01uF to maybe .1 uF - just to make sure, we'll also test some outside of that range.  But - how do we test them?

You can use a meter and measure the capacitance, and whether the cap is shorted or open, but that won't tell you how it sounds.  Ideally we need some way of hooking each capacitor up and actually listening to it.

But it would be difficult, and impractical, to test a number of caps in place, at the tone pot of a guitar.  It might be a good idea to make an external box to plug into, and then into the amp.  I had a cool looking, but dead, vintage TV antenna booster like this one: 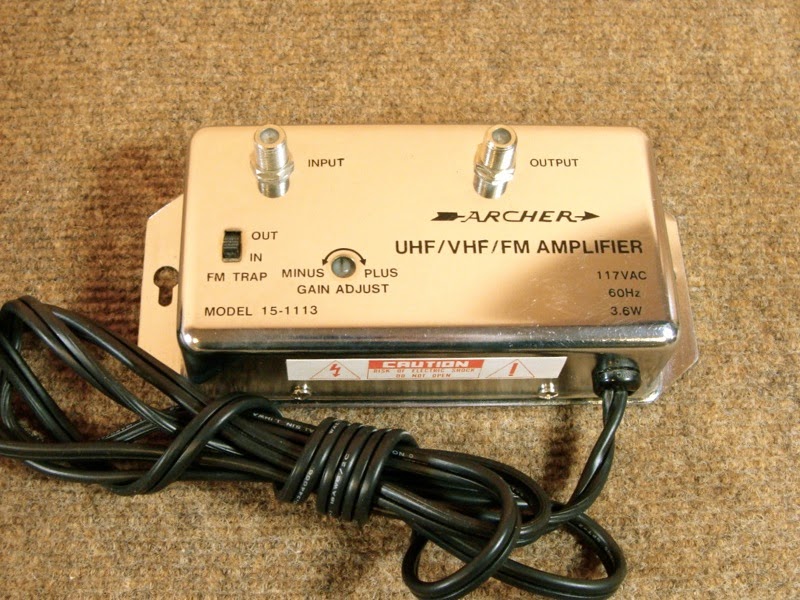 The coax jacks unscrewed and dropped down, taking the PC board with them, and the holes they were in fit 1/4" jacks perfectly.  The AC cord strain relief could serve the same purpose for the test leads.  Some drilling out made the gain adjust hole fit a 250K pot, wired like a guitar's tone control, except with two wires running out of the box attached to alligator clips, instead of a capacitor soldered between the pot and ground: 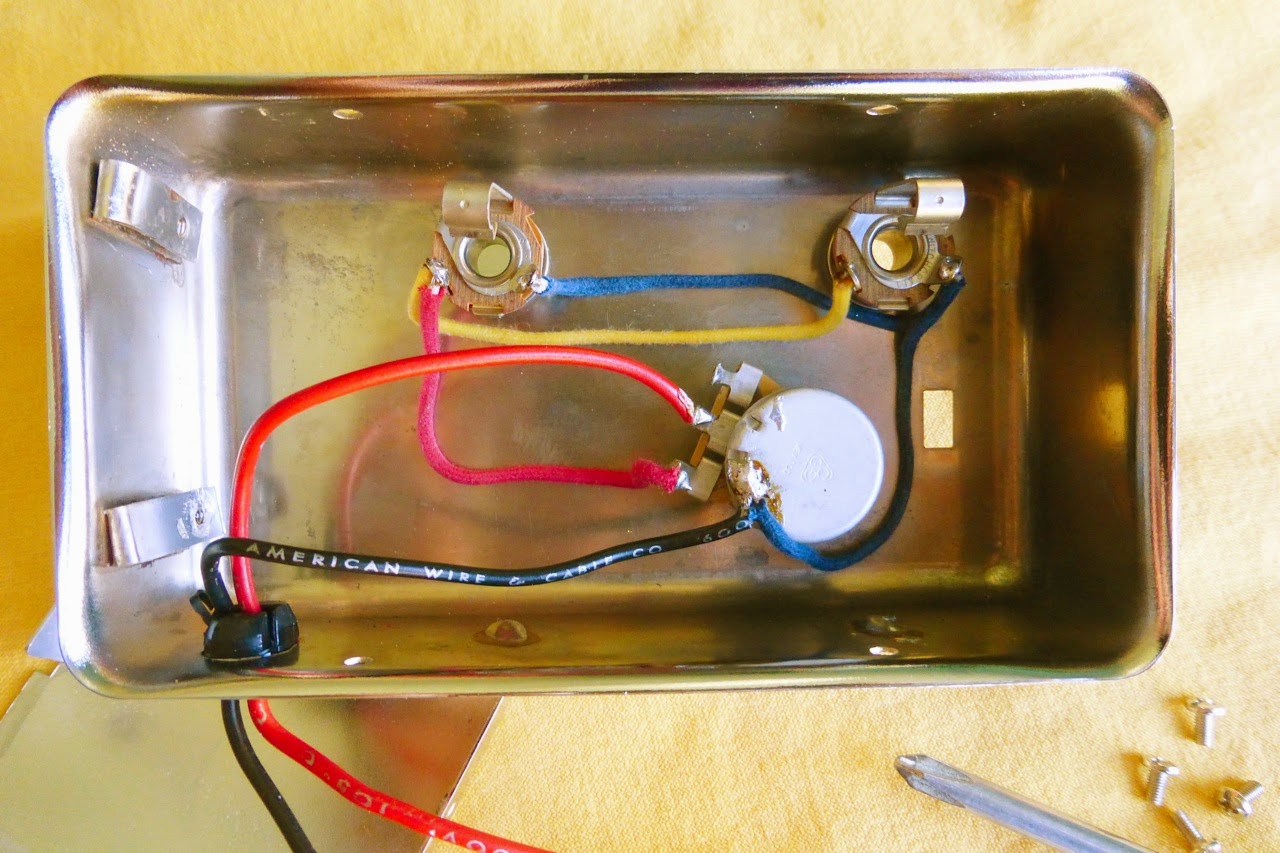 A gold Tele knob is a nice touch on the chrome box: 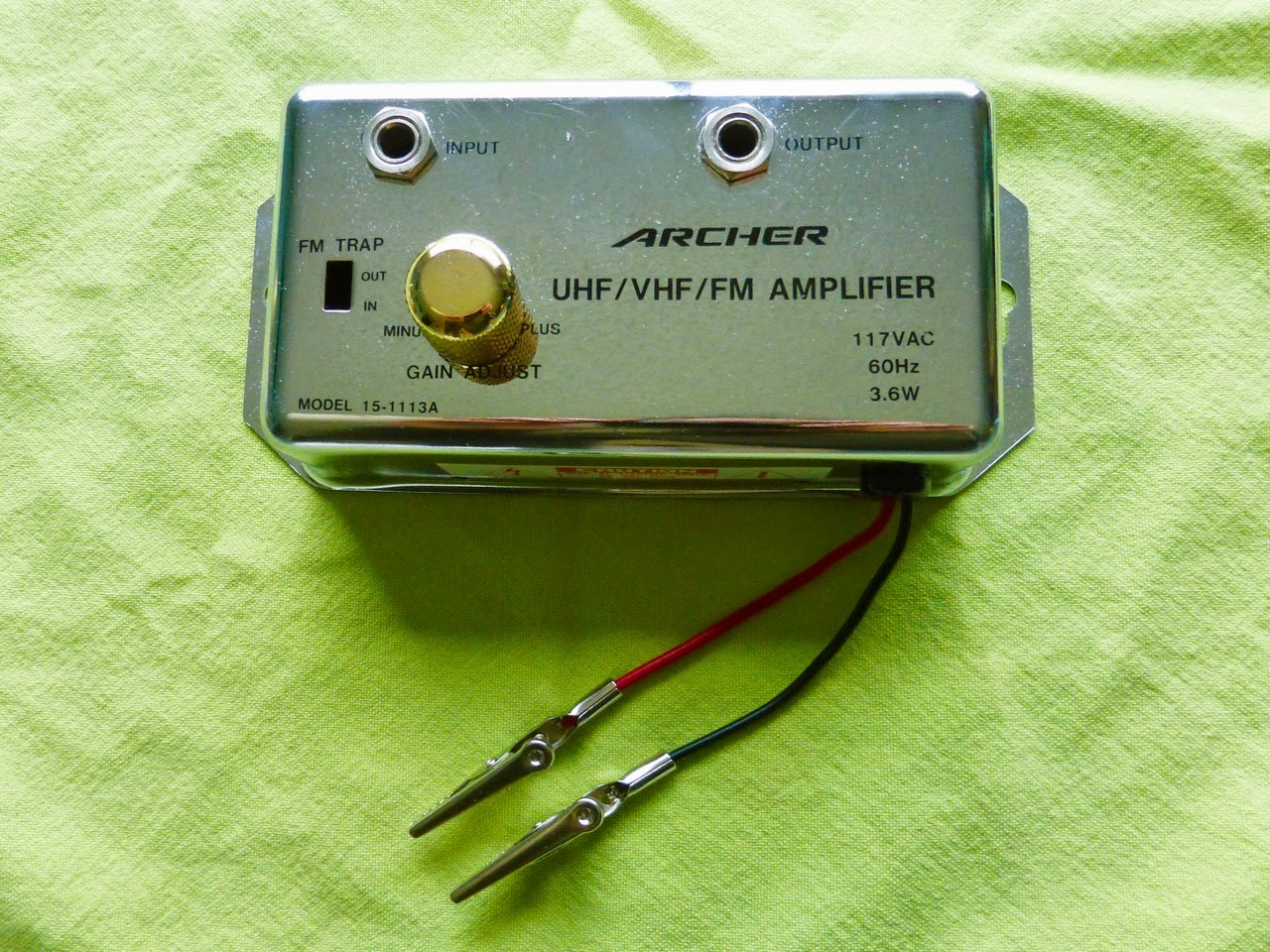 To save time, this will be audio testing only - how does the tone cap interact with a guitar pickup, through an amp, and how does it sound?  No measuring capacitors with a meter, no internet research, no thinking - we don't need facts or figures, or online opinions.  We're just looking for a great sounding tone cap.

In order to keep it consistent between tests, only the Strat Parts-o-caster will be used, usually in the middle pickup switch position.  And since it doesn't have a tone control yet, only the capacitor being tested will be heard.  However, if a particularly juicy sounding cap is found, I may check it out with another guitar or bass.

I should say here that I'm not going to talk about construction details, materials used (Mylar? Polyester? Paper in oil? Martian skin and peanut butter?), or the ages of any of these caps  - there's a huge amount of info out there about capacitors, most of it is contradictory, and much of it just sounds like hype or "cork sniffing" to me.  I'm a beer drinker, and I'll leave the wine tasting for others. 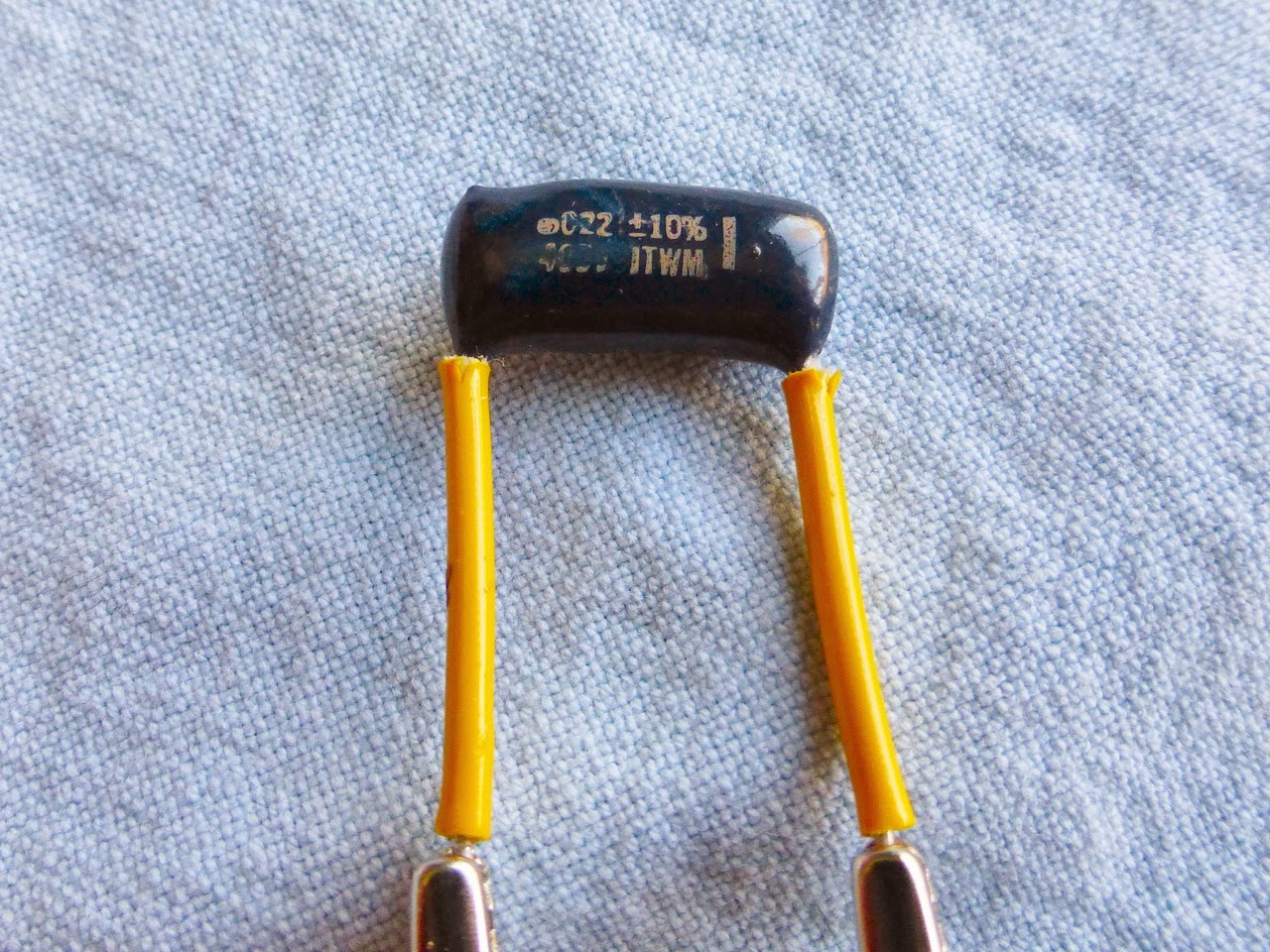 • Unknown maker, .022uF, "10%, 400V, ITWM".  This cap will be the reference capacitor for our tests, since it's the only one in this bunch that I've heard before in a guitar - it's an original tone cap from my '77 Gibson Les Paul Special, which I bought new in 1978.  I have to assume, knowing what level of care and craftsmanship that Gibson put into the rest of the instrument, that they knew what they were doing when they picked this capacitor.

Audio-wise, it's a perfect example of what a tone cap should be - full up, the guitar's high end still sparkles and chimes, backed off half way you can get some nice J. J. Cale style round and toneful solo lines, and rolled all the way down, you're in full jazz territory - big fat smooth tone, with no response peaks anywhere up and down the fingerboard.  Plus, from full counter clockwise up to halfway, there is a very slight, barely noticeable wah-ish effect.  Nice. 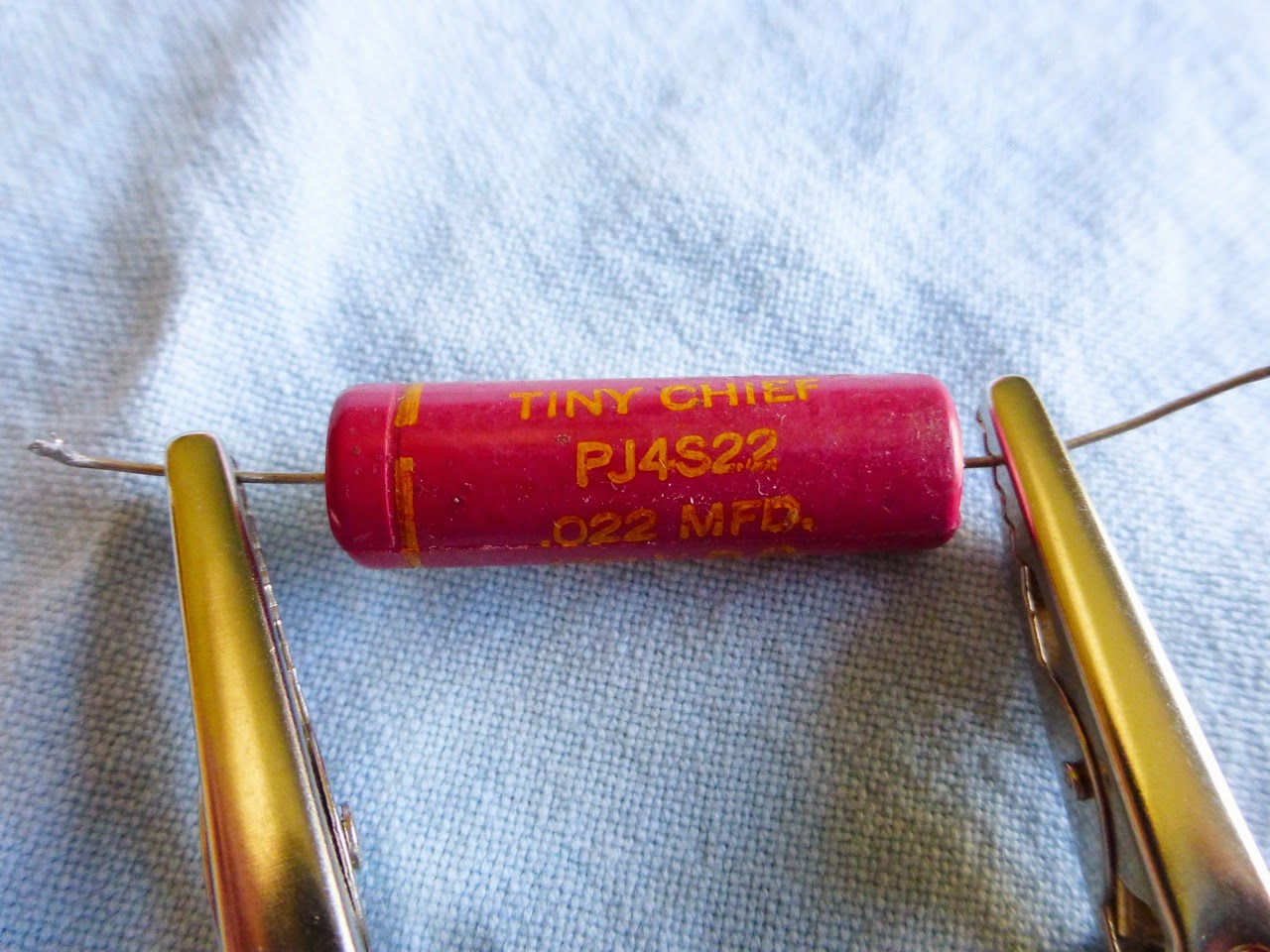 • Cornell Dubilier Tiny Chief, .022uF. "PJ4S22, 400 V.D.C., C-D, U.S.A".  This came, I think, from a Hammond organ, and if so they also must have known what they were doing.  It's got good tone, very similar to the first capacitor, except that at full clockwise, all the way up, it has just a slight bit more top end.  Good range of tone control, also nice jazzy lows, and about the same small amount of wah at the low range as the Gibson tone cap above. 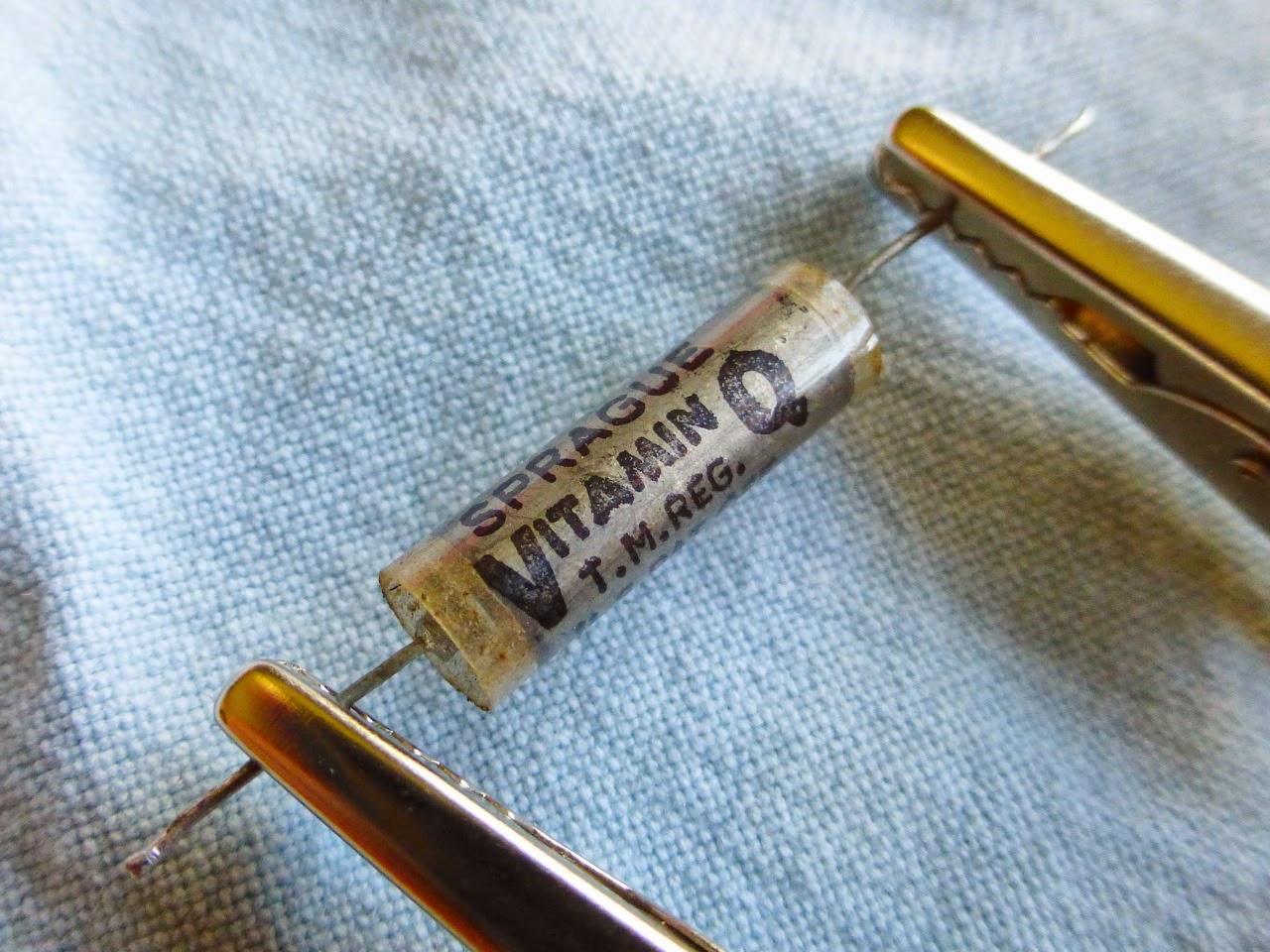 • Sprague Vitamin Q, .01uF, "CPO5A1KE103K, 400 D.C.".  This is one strange capacitor.  It basically has only two tones - full up, it does noticeably lose a slight bit of highs, but not too much; then, through most of the pot's range, there's hardly any effect, very little roll-off, until you get close to full CCW (counter clock wise).  At that point suddenly there's a strange nasally mid range hump, with less lows as well as highs, and oddly, it becomes a bit louder - it sounds a lot like stopping a wah pedal in mid stroke, except there's no wah effect at all when sweeping the pot.  Like I said, very strange, and it might be fun to have in a guitar as an alternate sound, connected to an on/off switch instead of a pot, but as a variable tone cap it's about useless. 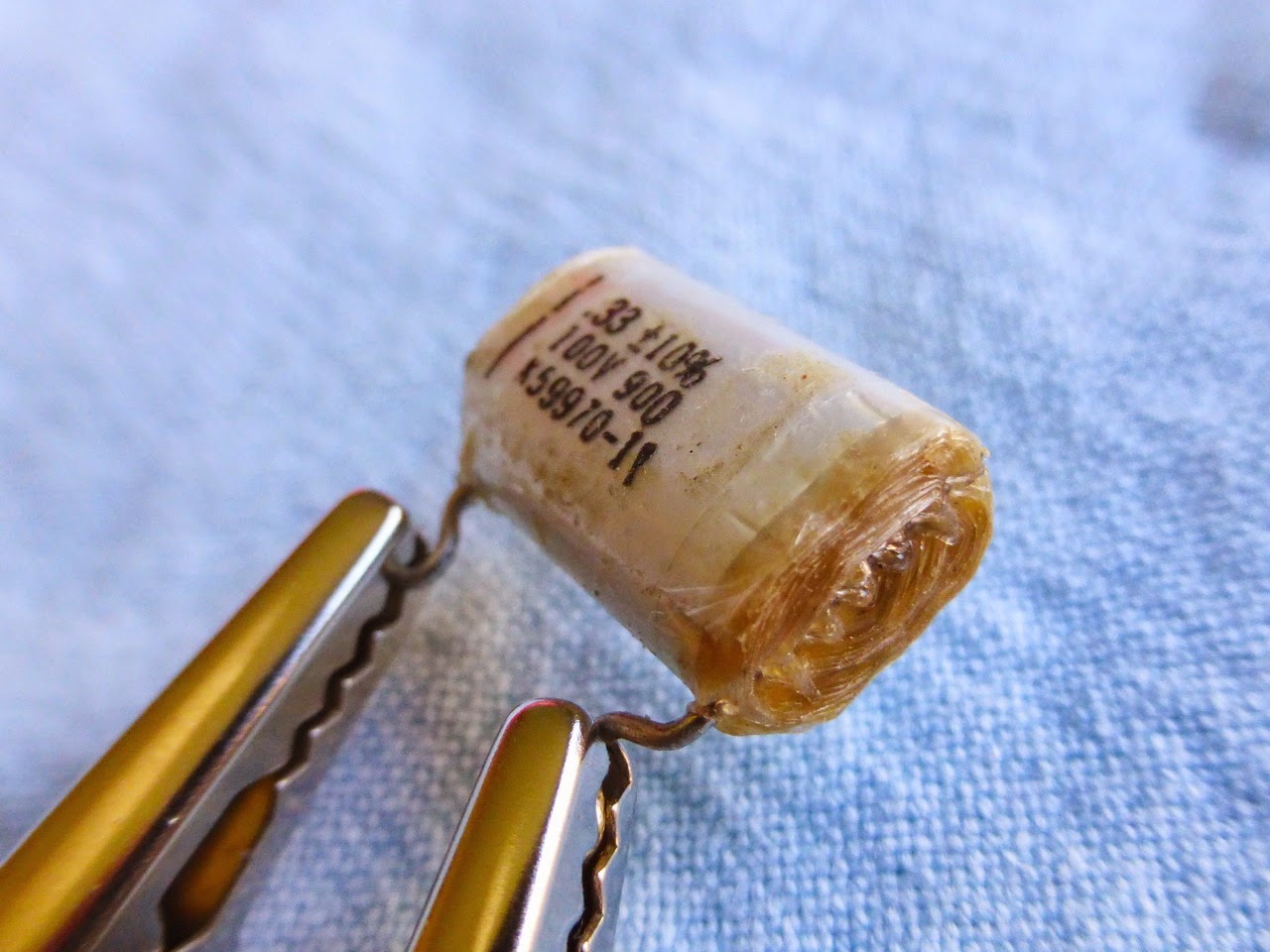 • Unknown maker, .33uF, "10%, 100V, 900, K59970-11".  I got this one from Double Dave, and it's from a solid state Conn organ.  It's obvious that this cap is made from some kind of rolled paper and foil, and so it looks ultra cool - kind of like a Greek baklava pastry.  At .33uF, it's way out of the guitar tone cap range, and hooked up, it sounds like it.  When you turn the pot, it instantly starts rolling off the high end, with not too much change after that, until at full CCW, it sounds like a giant marshmallow ate your guitar. A noticeable bassy hump around G sharp, and no wah effect at all.  It was fun for a while, emulating the sound of an electric bass made out of sponge rubber. 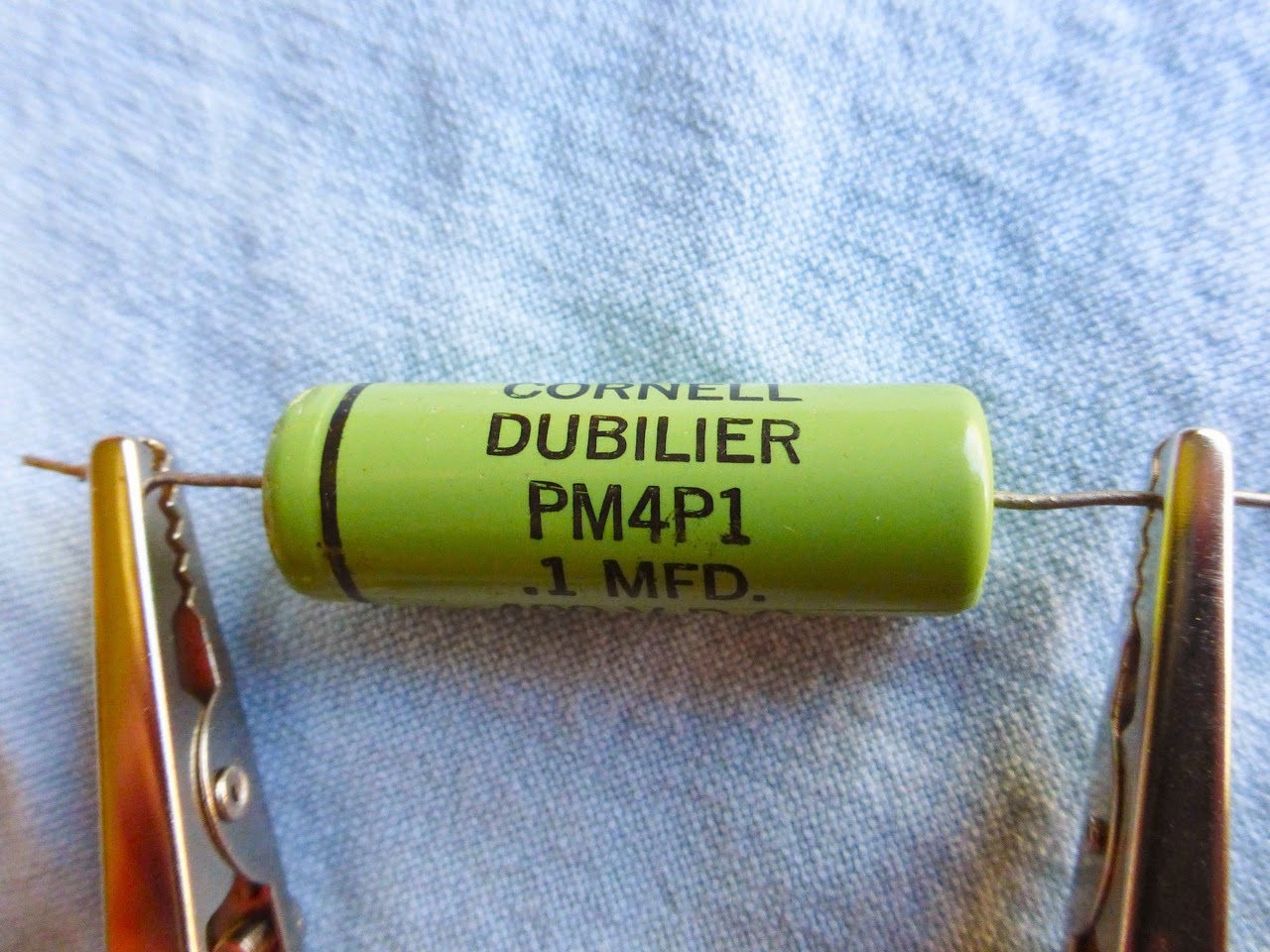 • Cornell Dubilier, .1uF, "PM4P1, 400 V.D.C.".  This is another very good tone cap - at full CW (clock wise), the Strat still sounded like a Strat, then there was a gradual tapering off of the highs through the range of the pot, and at full roll off there was, as expected, even less top end and upper mids than with a .022 cap.  At full CCW, it sounds ultra fat, with no humps or peaks, and I suspect it might make a nice tone cap for a bass.  Only a very small wah effect.

That's it for this installment; in Part 2, we'll test some more vintage and modern capacitors, as well as look at the insides of a 1950s Sprague "Bumblebee" cap.  Stay tuned!