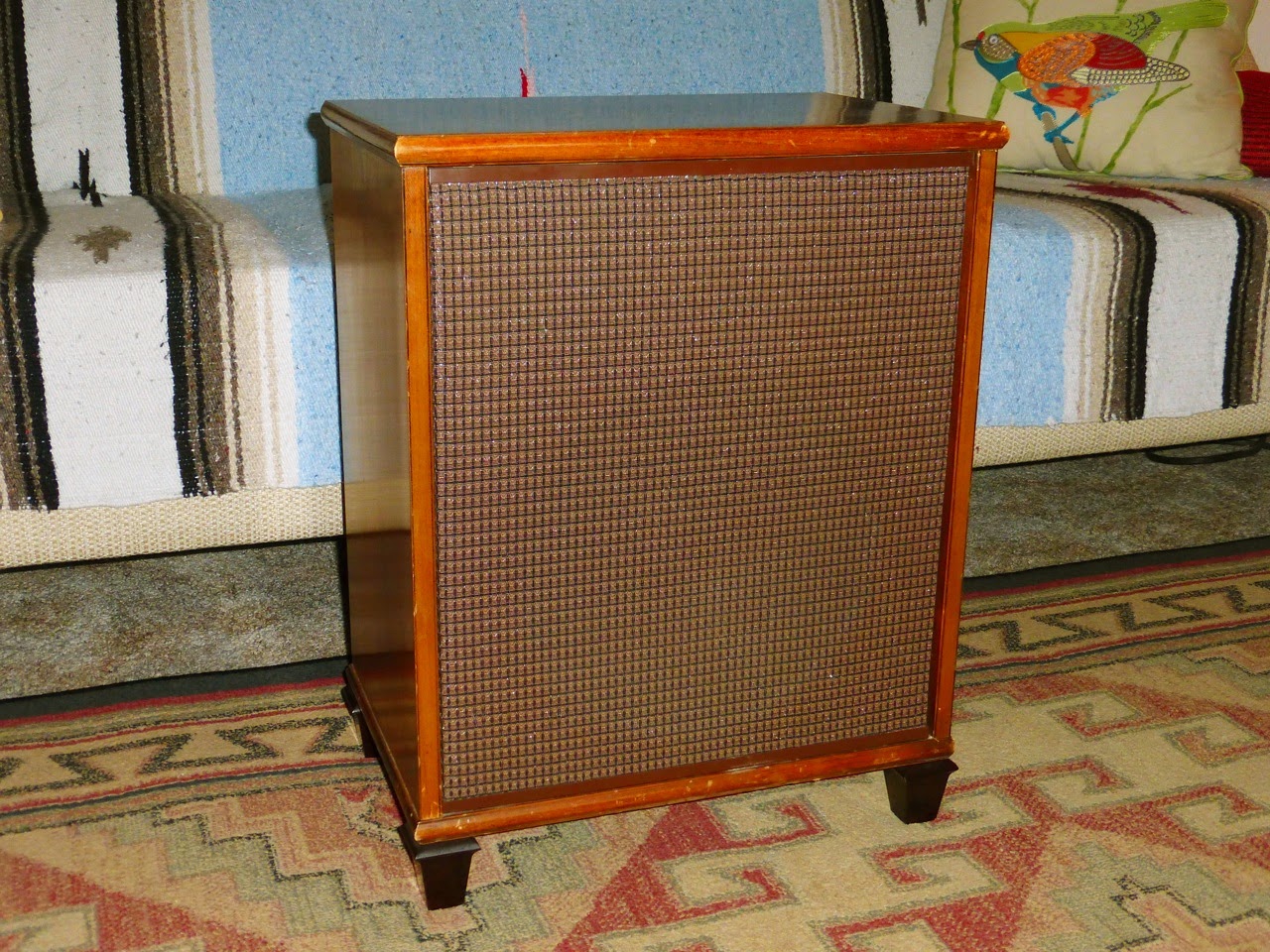 Chris called, said he was cleaning out his garage, and could I use a 12" speaker cabinet?  Well, it's spring, I'm cleaning out my own garage, but yeah, sure - I'll be right over.  When I got there, he led me over to this really cool looking old piece of furniture, an extension cab for a Hammond M3 organ: 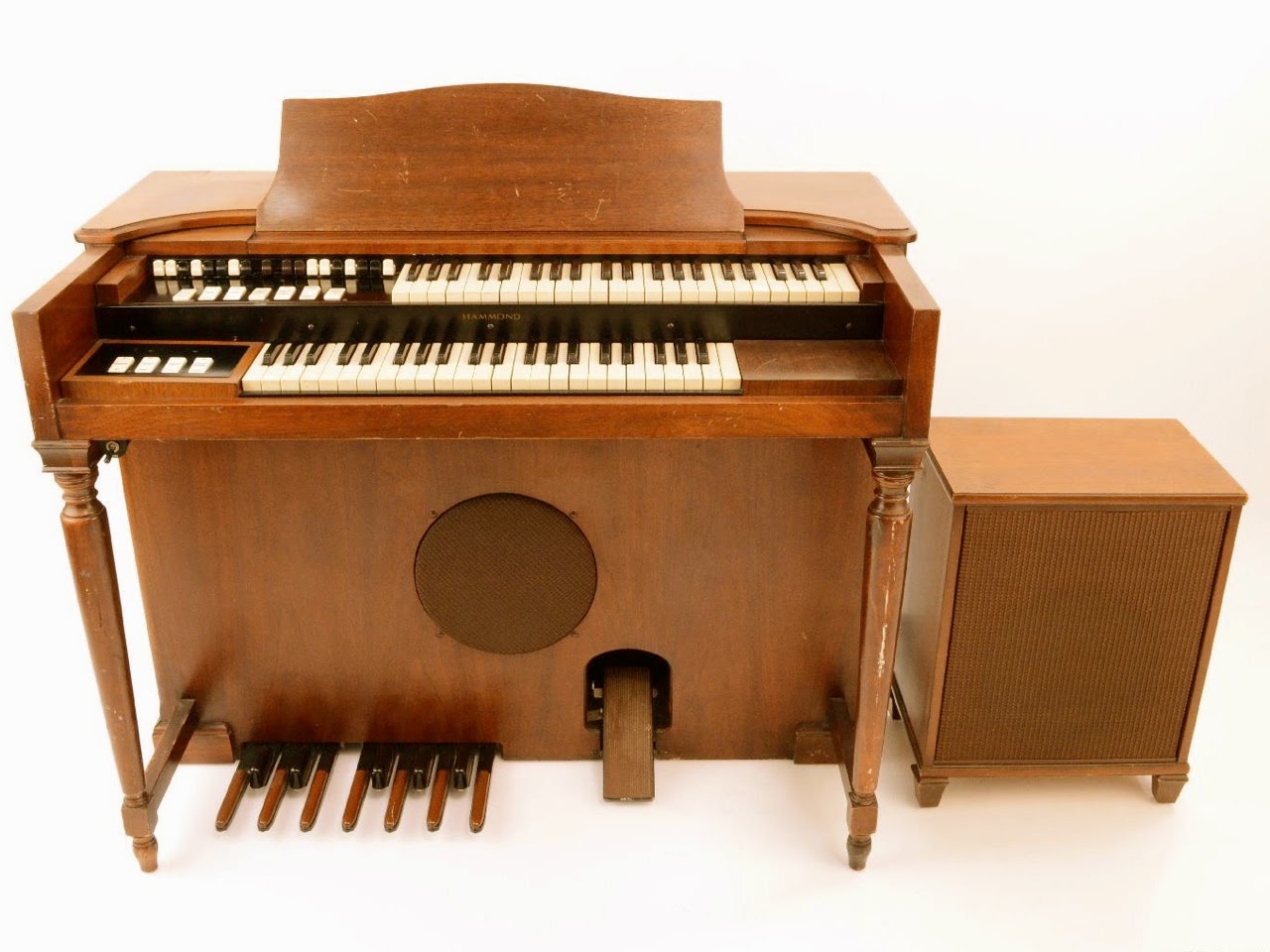 The picture above gives some idea of how petite this cabinet is - about 16 1/2" wide, 19" high, and 21" tall including the odd looking stumpy short legs.  Also, keep in mind that the home consumer market M3 is about 2/3 the size of the pro level Hammond B3.  Made for use as an extension speaker to be used with the M3's built in reverberation system, this cute little cab has a style which, like most all of Hammond's products during their Golden Age, can possibly best be described as "Funeral Parlor Chic".

An open back speaker cabinet with an internal volume very similar to a Deluxe or Deluxe Reverb, and with classy furniture styling?  Sounds like a great living room guitar amp cab to me.

Here's a shot of the back of the cab: 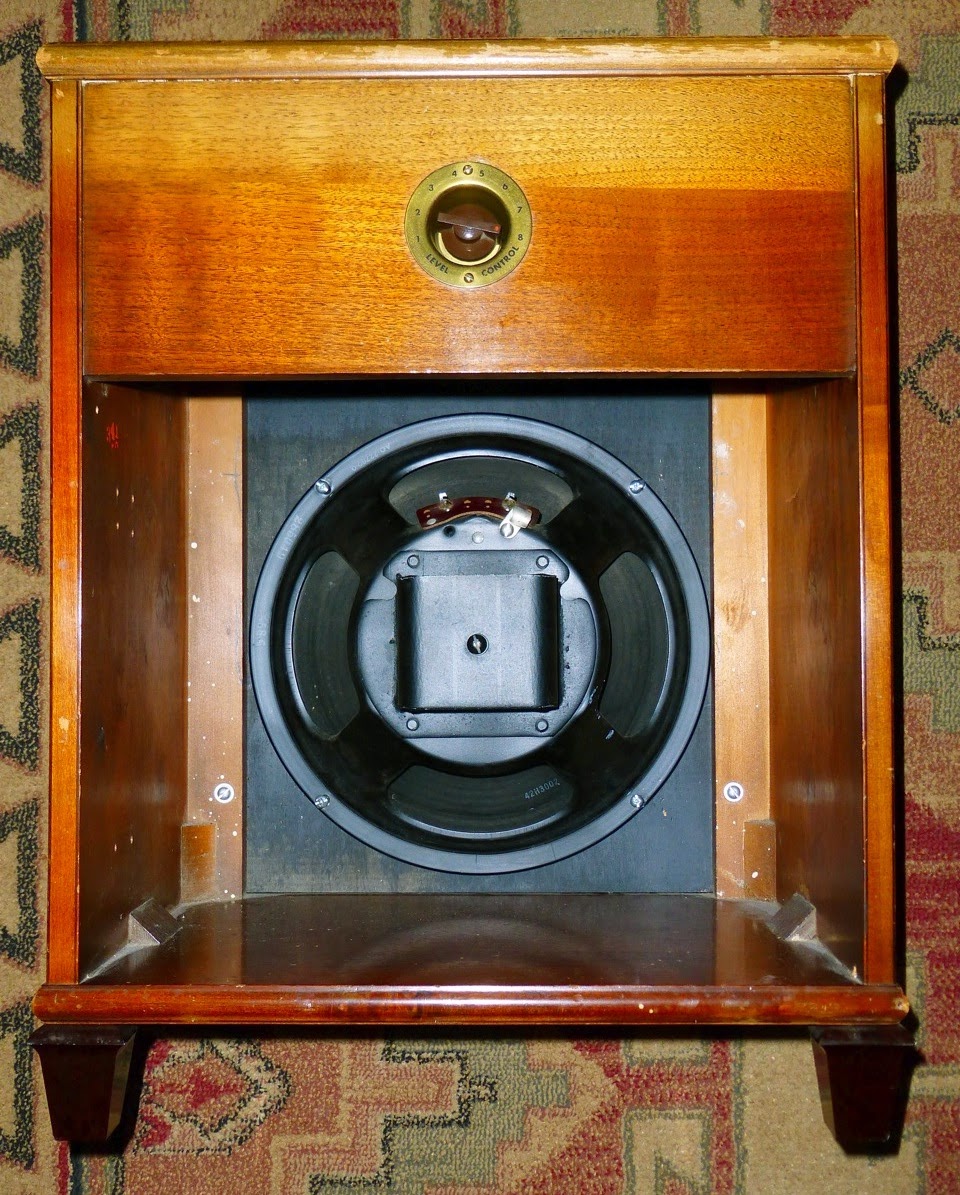 From the rear, this cab looks a lot like a bedside table.  Note the very high quality Rola 12" speaker; inside the magnetic field yoke assembly is one of the largest Alnico plug magnets I've ever seen.  The speaker was wired in series through an 8-position constant impedance attenuator (volume level control); you can see the volume knob nestled inside the brass plated cup in the back panel of the cabinet.

Chris thought of using the volume plate as a mount for an input jack, and it's a great idea.  Let's get to work; first step is to remove the plate: 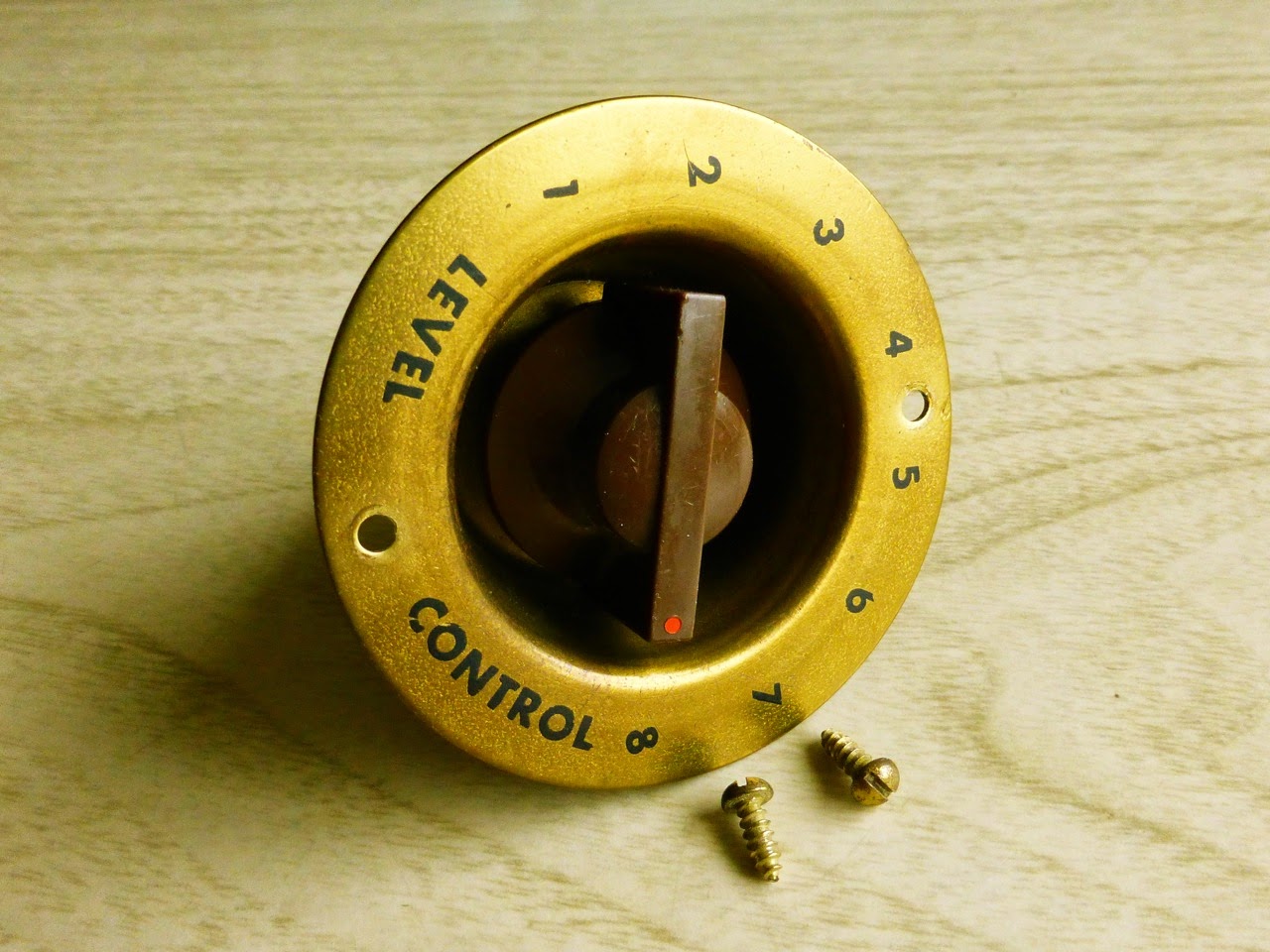 As you can see, Hammond was first class all the way; there's even brass screws holding the level control plate down.  On the back of the 8-way switch, are the carbon comp resistors making up the volume dropping network: 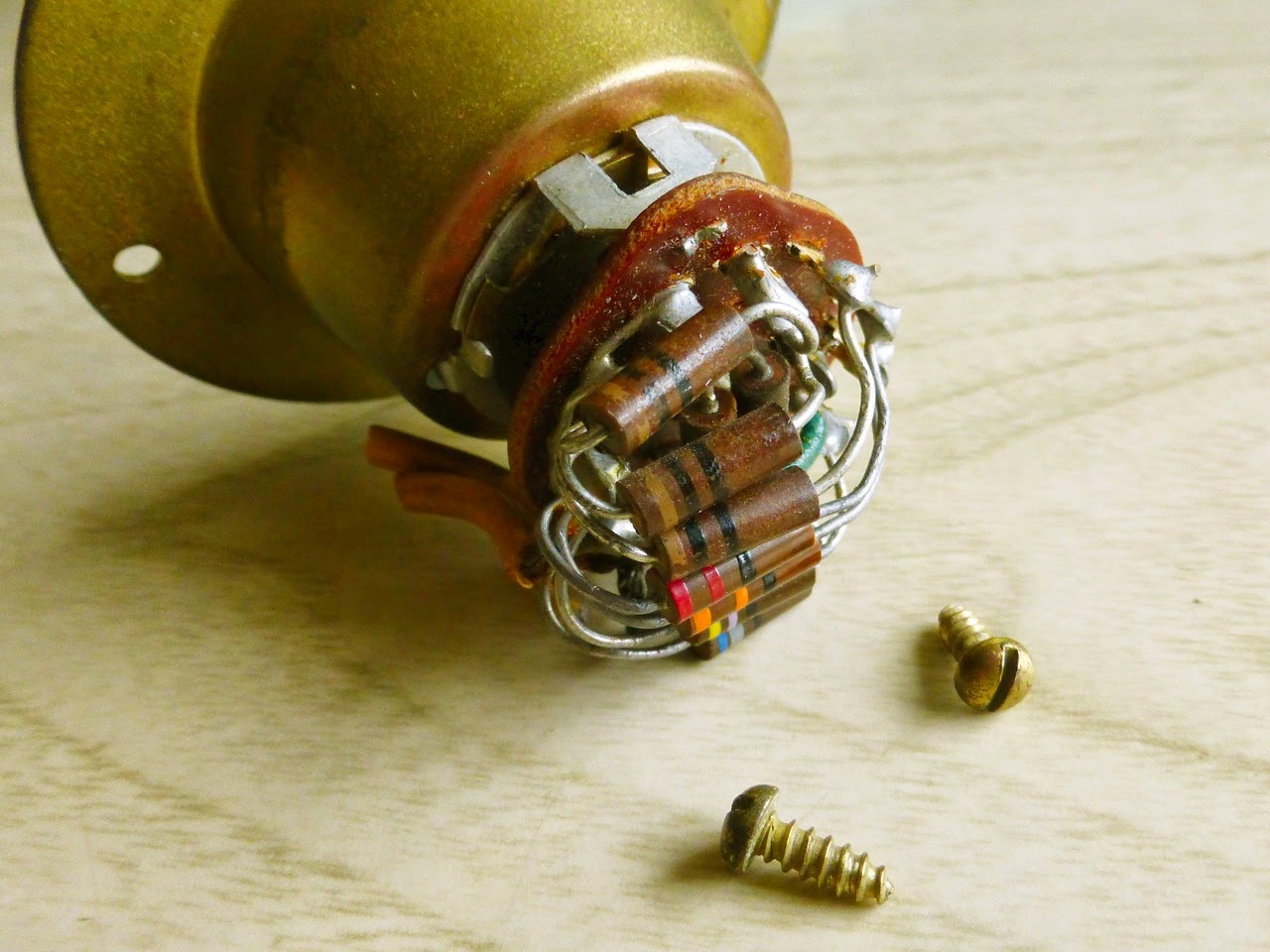 The push-on knob pulled off easily, and unscrewing the mounting nut freed the switch from the cup: 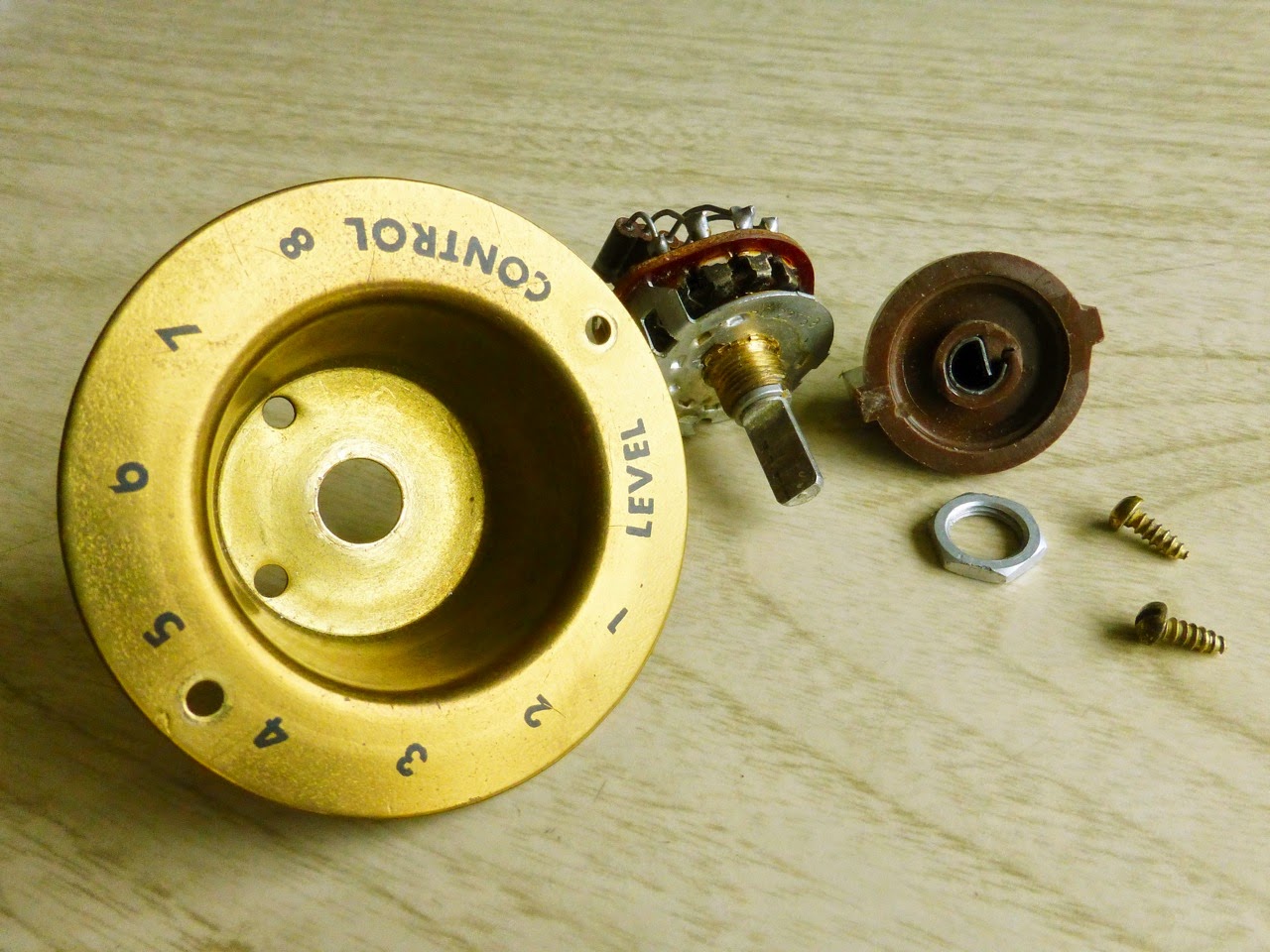 Next step was making up a connecting cable assembly with a 1/4" 'phone' jack, a foot of 16/2 wire soldered to it, and a couple of push-on spade terminals crimped onto the other end: 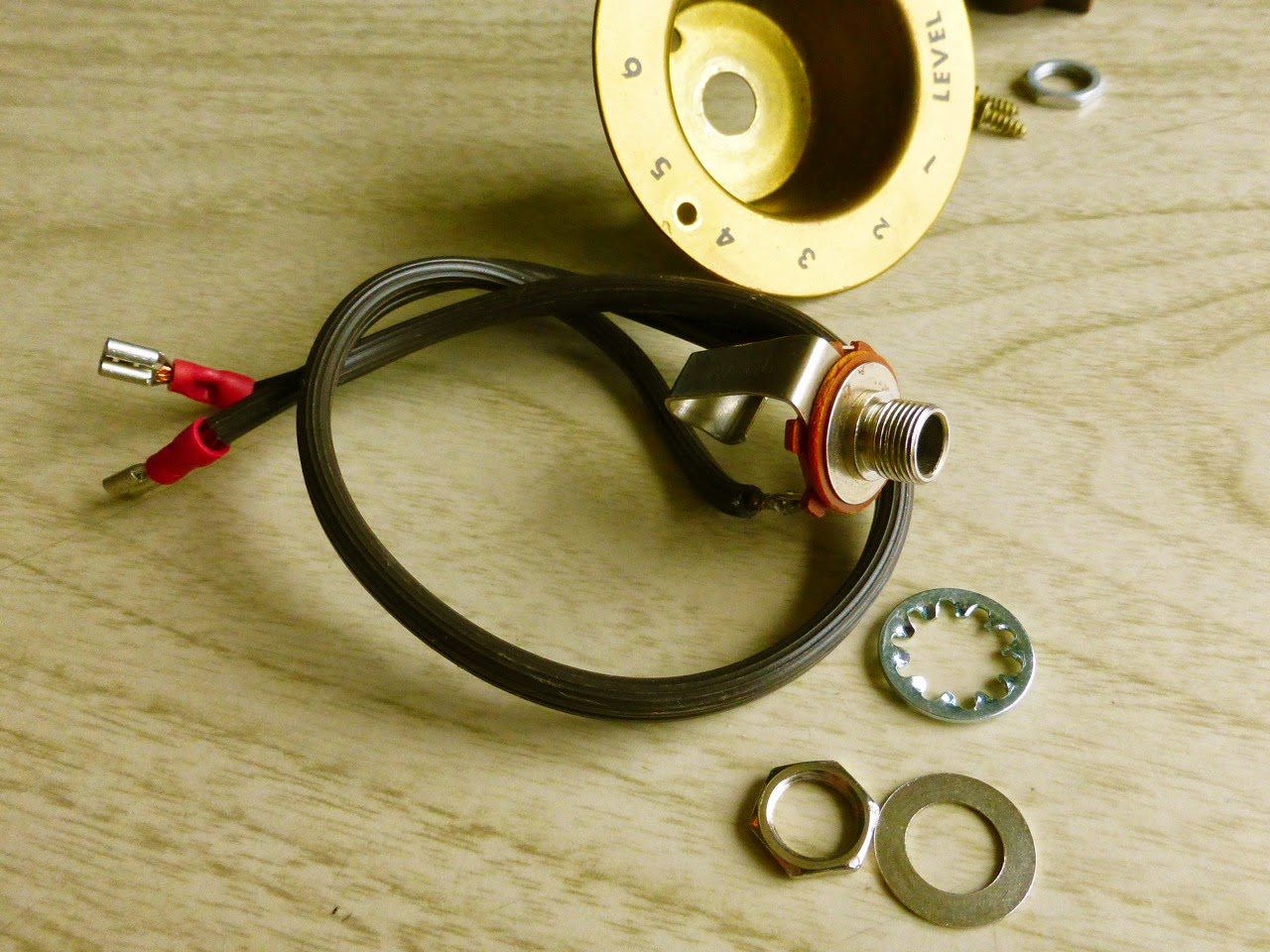 A nut and a toothed lock washer on the back of the plate, and a finish ring and another nut on the front made for a flush mount installation of the 1/4" jack, with none of the shaft projecting beyond the nut: 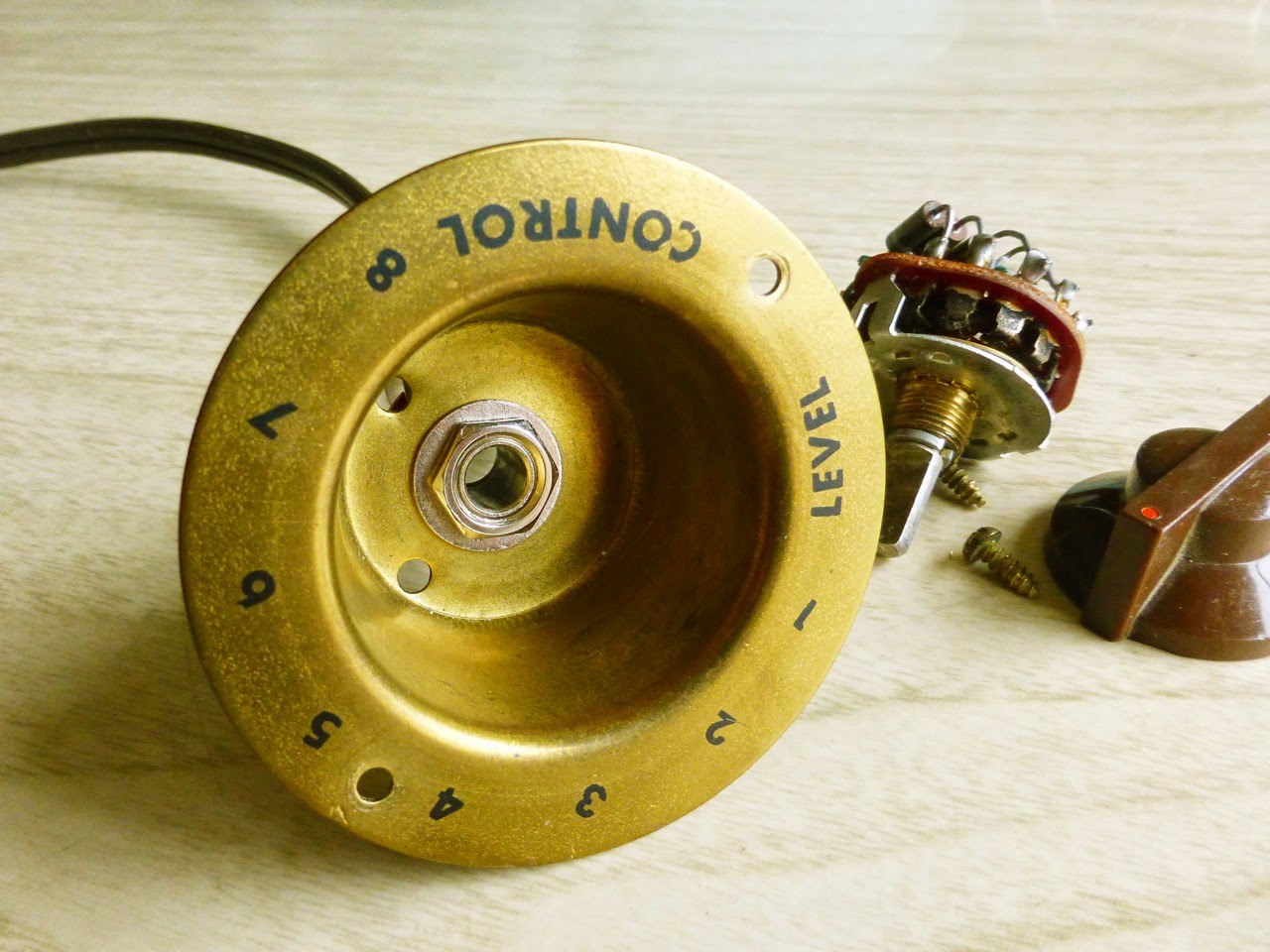 There was a heavy duty steel mesh screen between the Rola 12" speaker and the baffle board, presumably to guard against youngsters poking things into the speaker cone; luckily in our household, we only have a teenager and friends who swing wooden katana swords and smash porcelain things.  I removed the screen, since it was causing some vibration during preliminary testing: 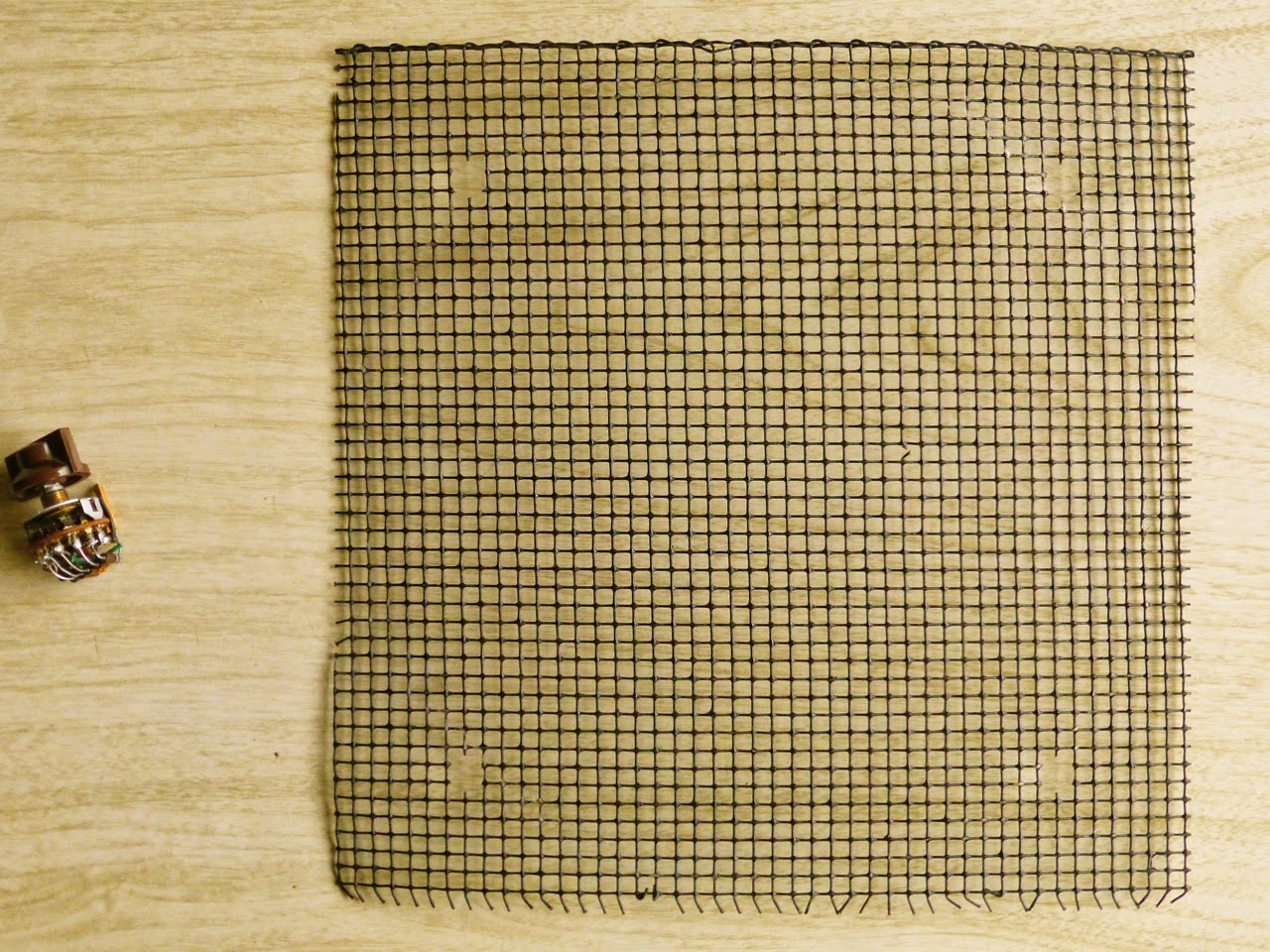 Here's another photo of the back of the cabinet, with the newly converted jack cup reinstalled into the back panel, and the 16 gauge jumper wire hooked up to the Rola 12: 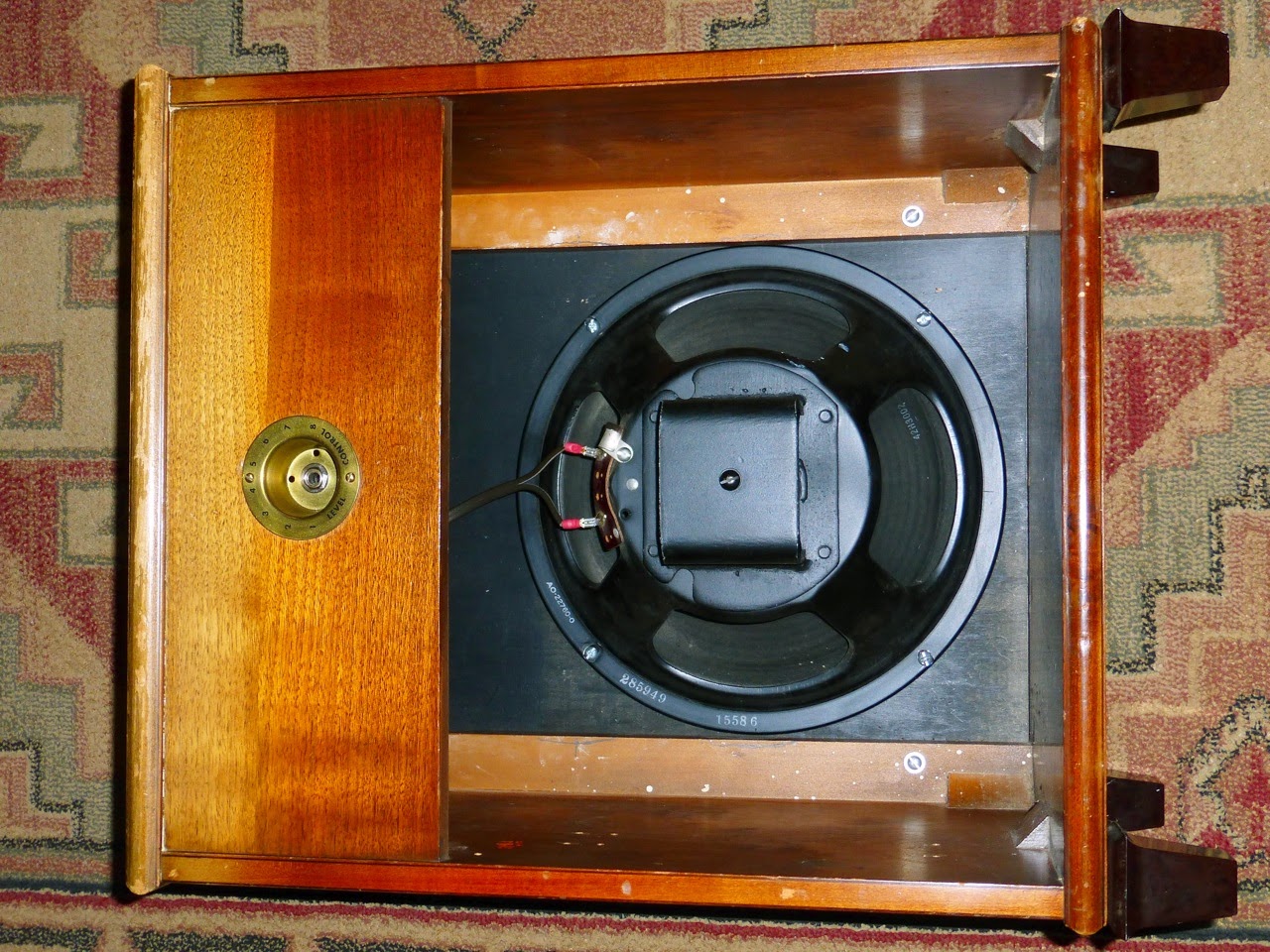 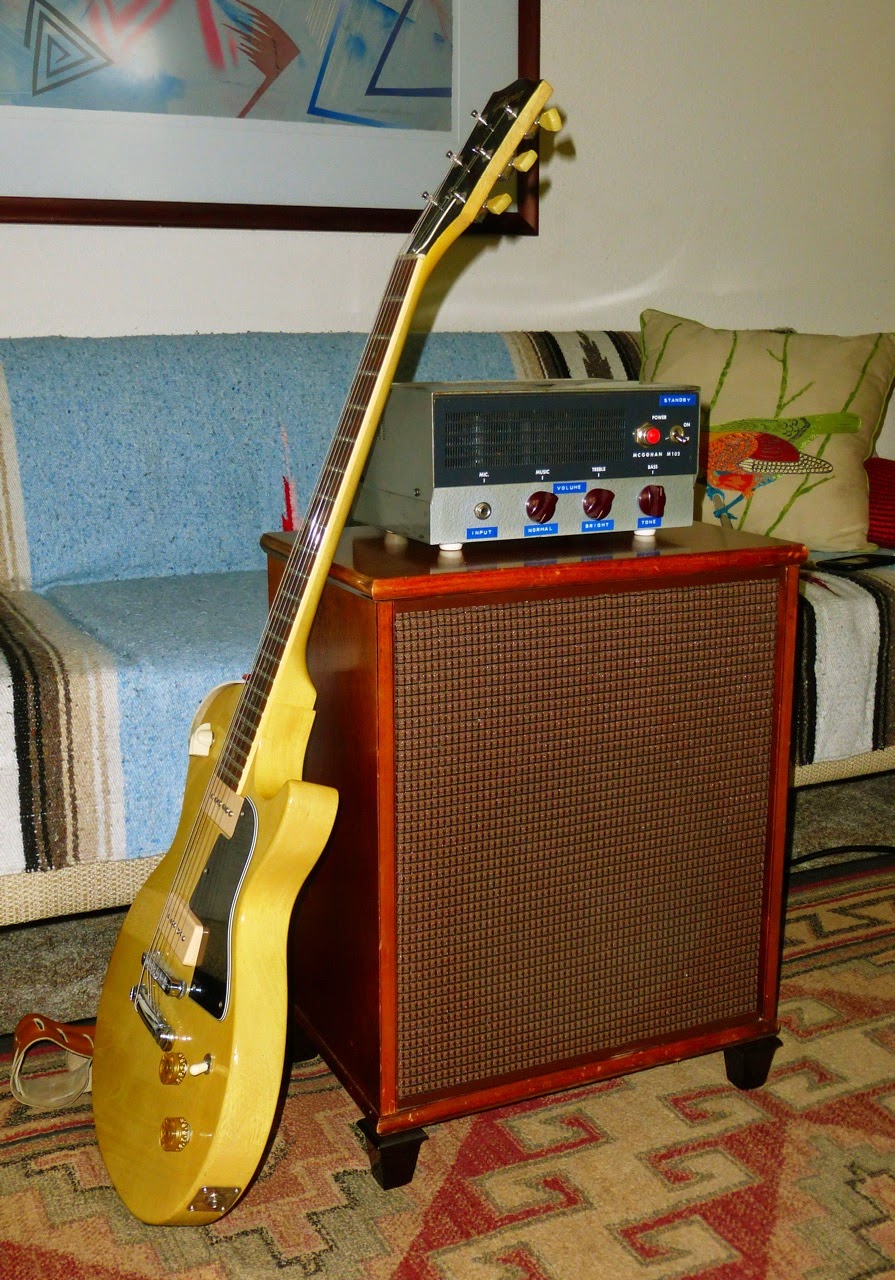 And how does it sound?  Really nice - this Rola organ speaker has a smooth natural high-end roll-off that complements an overdriven low power tube amp very well.  It's also very efficient - maybe it has to do with its large Alnico magnet, or the deep curved cone - it puts out a lot of sound with just a few watts coming in.  Never played through a Rola before, and I'm pleasantly surprised at its rich tonality.  All in all, a very decent sounding speaker for guitar use, and it makes me wonder what four of these puppies would sound like in a 4X12 cab.  And - where have I seen that particular frame design before?

But - we're not done yet - in Part 2, we'll flip the baffle board 180 degrees to get the speaker a bit higher off the floor, and install my all time favorite guitar amp speaker, an Alnico magnet Altec Lansing 417-8C.  Stay tuned!

Click or tap on any picture above to access larger, higher def images.  Most of the photos were taken with a Lumix ZS-25.  Picture of M3 with extension cab from Techno Empire.
Posted by James Aoyama on 5:16:00 PM
Newer Post Older Post Home