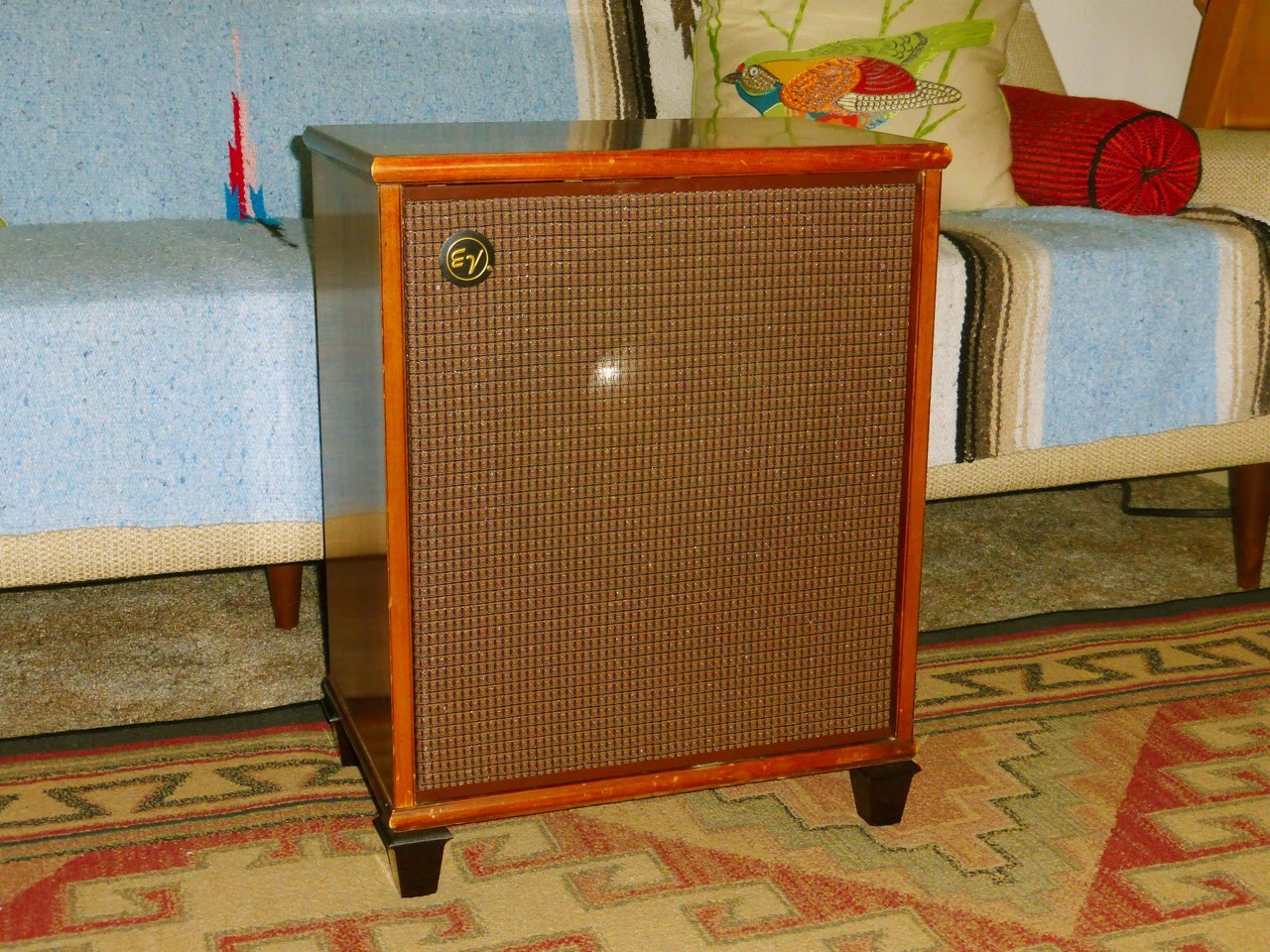 In Part 1, we brought this cute little Hammond M3 extension cab home, installed a 1/4" jack where the volume control used to be, hooked it up to an amp, and rocked out for awhile with the stock Rola organ speaker.  The Alnico magnet Rola is a very good sounding vintage 12" speaker, and eventually it will find another enclosure of its own, but today we're replacing it with my all time favorite guitar amp speaker, an Altec 417-8C.  This Altec had been sitting in a box on a shelf in the back room of a music store in a little town in the Southwest, gathering dust for decades, brand new, when I found it some years ago, and it's been in a few amps since then, getting the job done without complaint, clear and toneful at low volume, singing and soaring when pushed, and always sweet.

Sharp eyed readers may notice the Electro Voice badge on the grille - it's about the same vintage as the cabinet, late 1950s, and has that similar old fashioned look to it, and besides it needed a home.  And since the Hammond cab never had a badge even when it was new, well, why not?  Plus, it looks cool, and that's always a good thing.

So, with that out of the way, let's get started.  The factory original Rola is a tight fit in this cabinet, and it barely clears the baffle board mounting cleats on the sides of the cab: 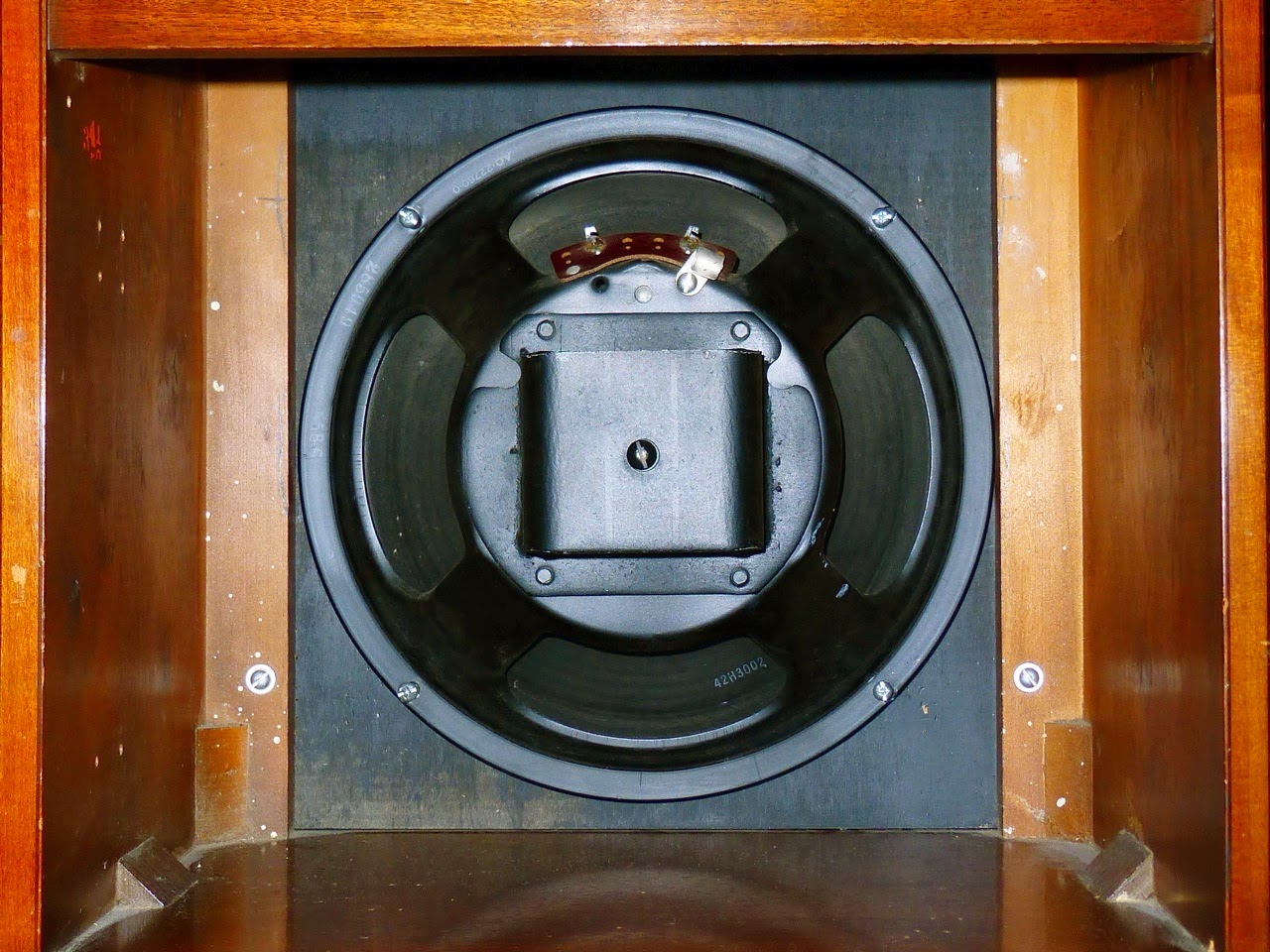 The Rola has a 12 1/8" diameter, but the Altec is 12 1/4", and it's not going to fit in there without a bit of modding.  Also, the speaker is mounted toward the bottom of the cab.  However, since the T-nuts on the baffle board and the holes on the cleats are positioned symmetrically, it will be possible to flip it 180 degrees to get the speaker up near the top of the cabinet, for a clearer tone.

First we lay the cabinet down on its front, remove the round-head slotted bolts holding the baffle to the cleats, and lift the cab away: 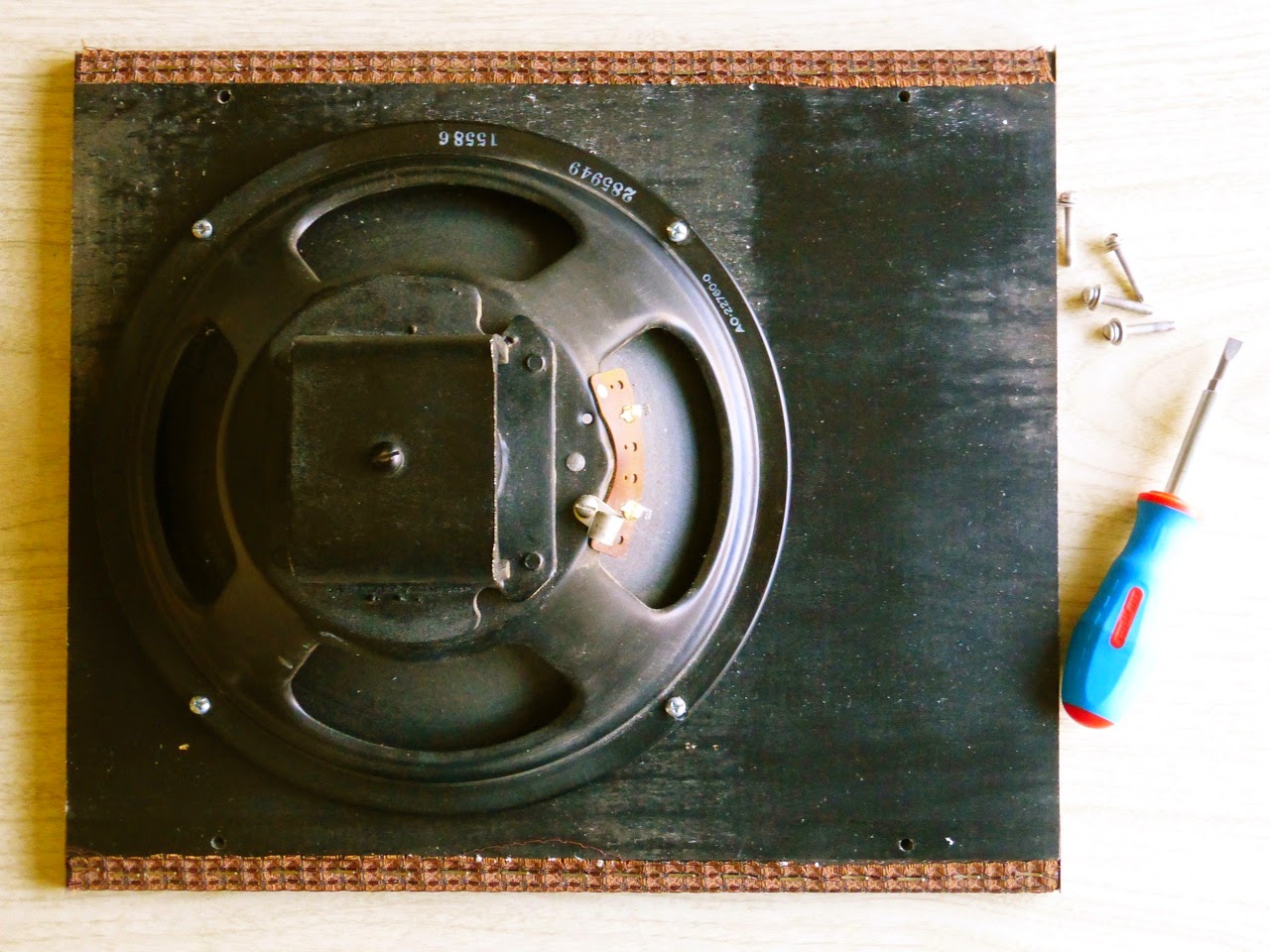 Now, the four bolts holding the speaker to the baffle are unscrewed from the four T-nuts, freeing the Rola: 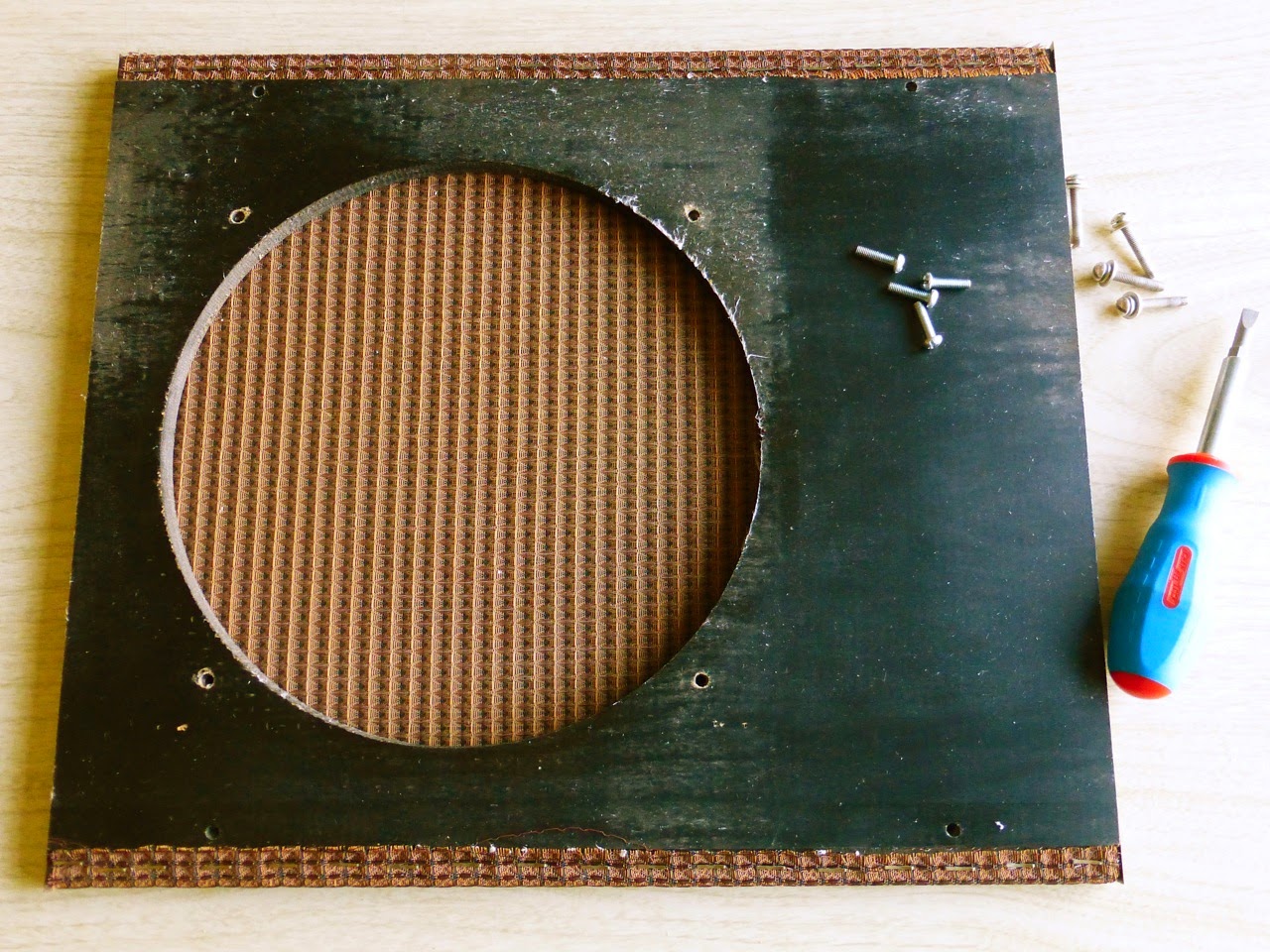 Today we're in luck; even though the Altec is larger in diameter than the Rola, the mounting hole pattern on their flanges is the same, and it's a direct fit on the baffle, no surgery needed.  Here's a couple shots of the Altec Lansing 417-8C: 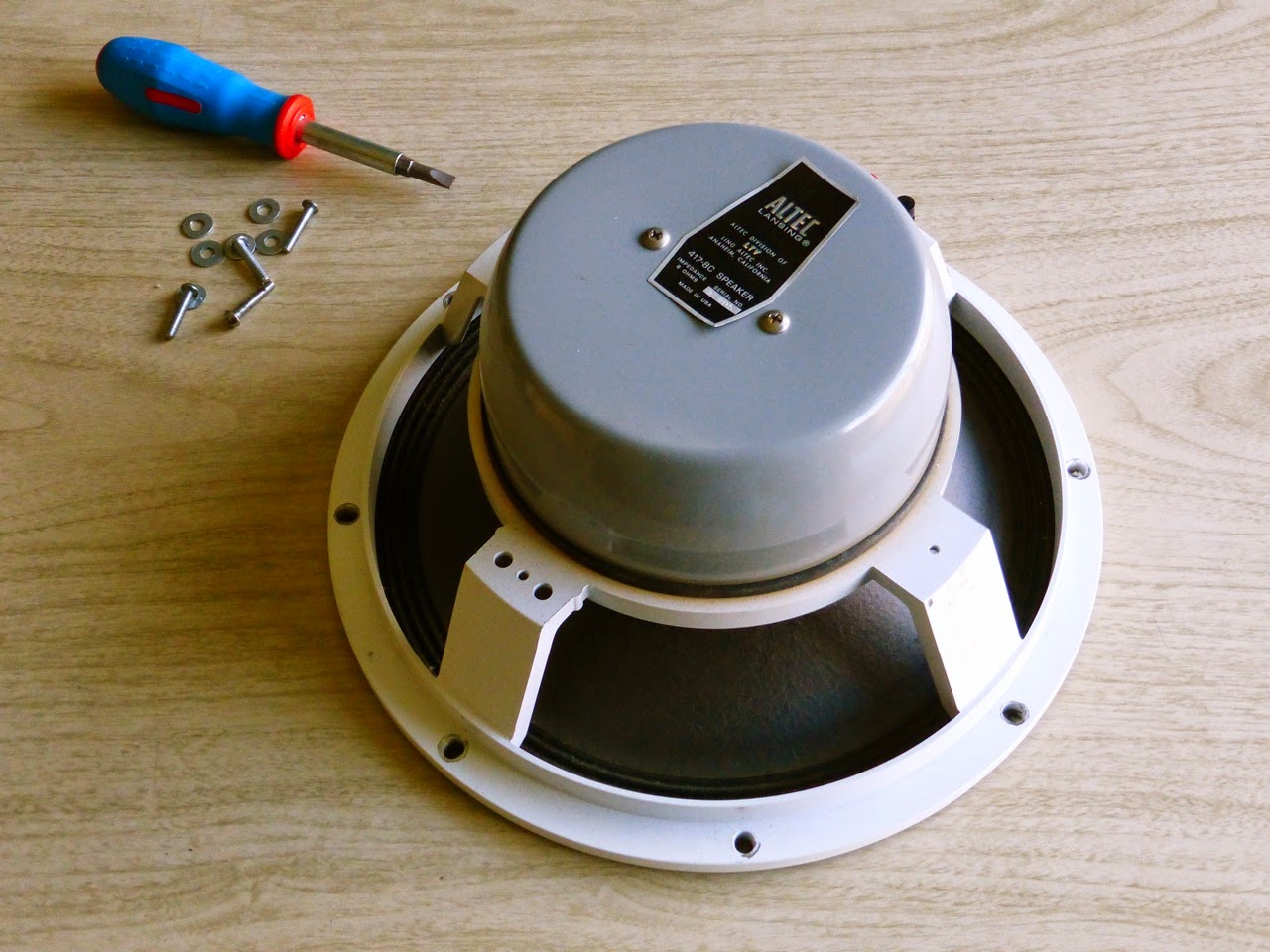 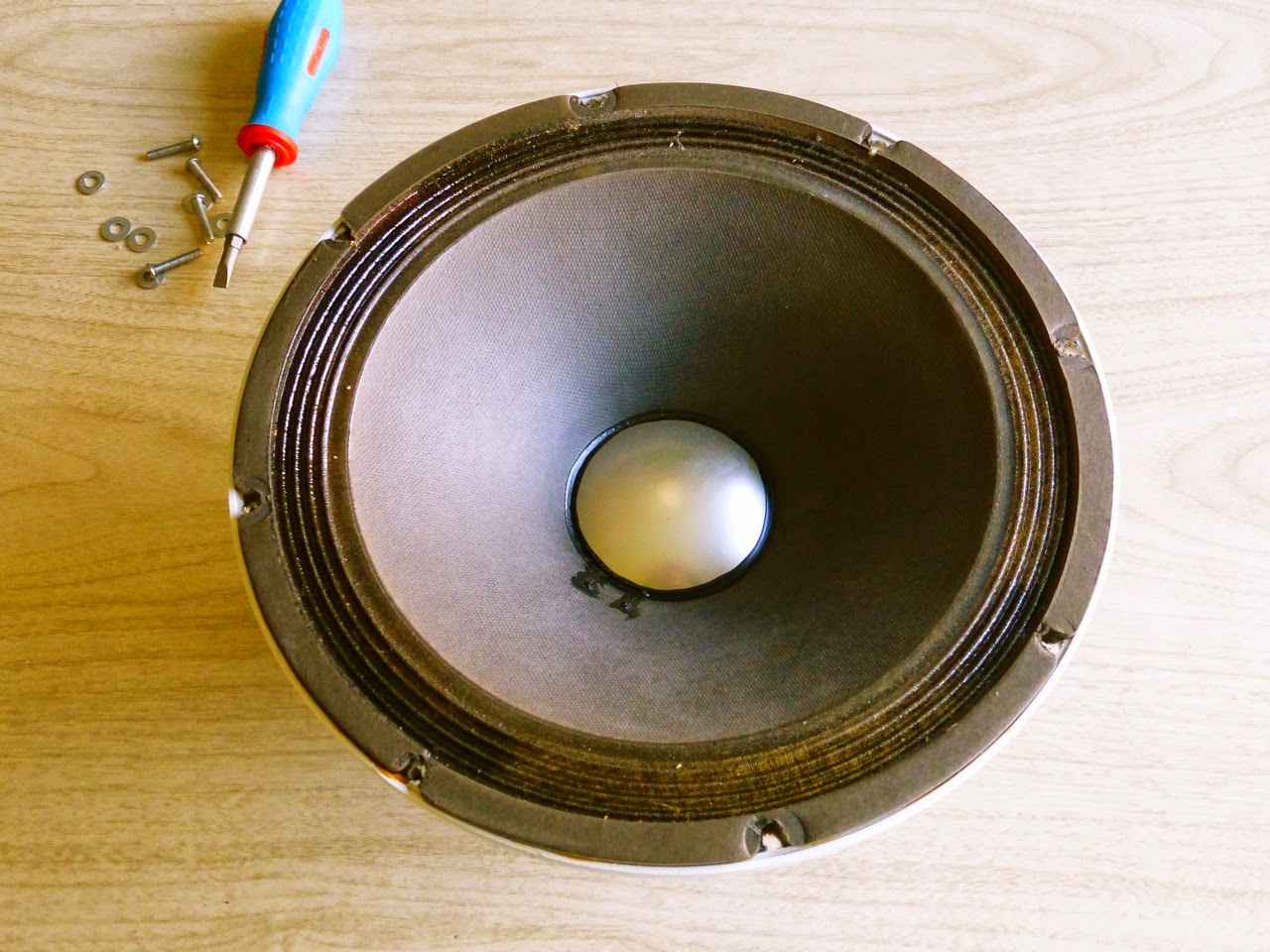 The Rola, like most speakers, has a stamped sheet metal frame, which is thinner than the cast aluminum alloy frames of higher quality speakers such as EV, JBL, and Altec.  The original 3/4" long bolts holding the Rola onto the baffle weren't long enough for the thicker Altec frame, but 1" bolts were a bit too long, and hit the grille cloth when screwed down through the T-nuts.  A washer and an adjusting cone from a bicycle cantilever brake shoe were just the right amount of shims: 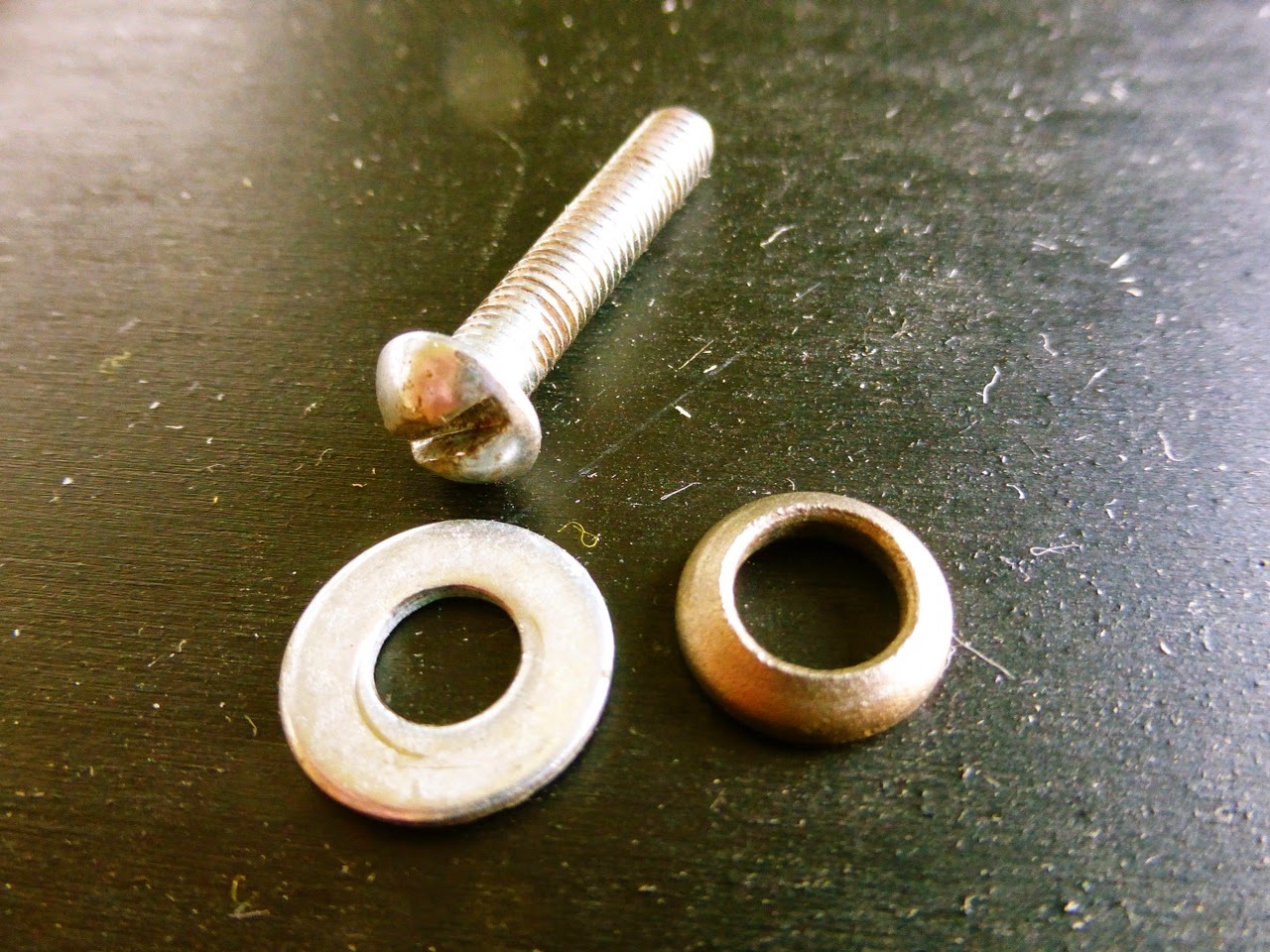 The Altec is placed on the baffle, and the bolts are run down, but not too tight.   Just 1/4 to 1/2 turn past snug, tightening each bolt a small amount at a time while working around the speaker, is all you need for a firm mount, without danger of warping the frame and causing voice coil rub: 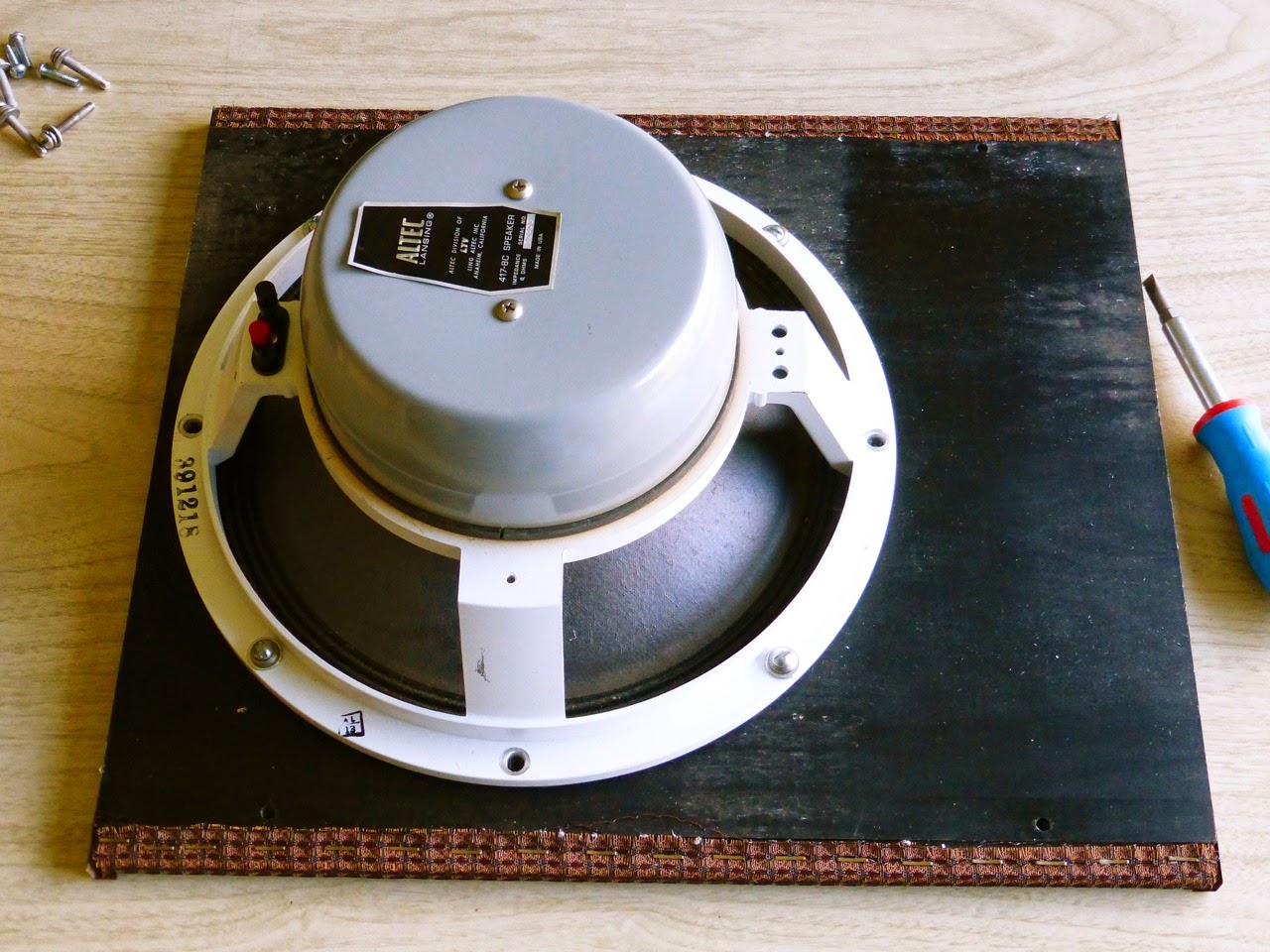 Here's where the fun starts - placing the cab back down over the baffle, we see that indeed, the slightly larger Altec will not fit between the side cleats.  It's a really close, it almost fits, but some slight adjustment is necessary: 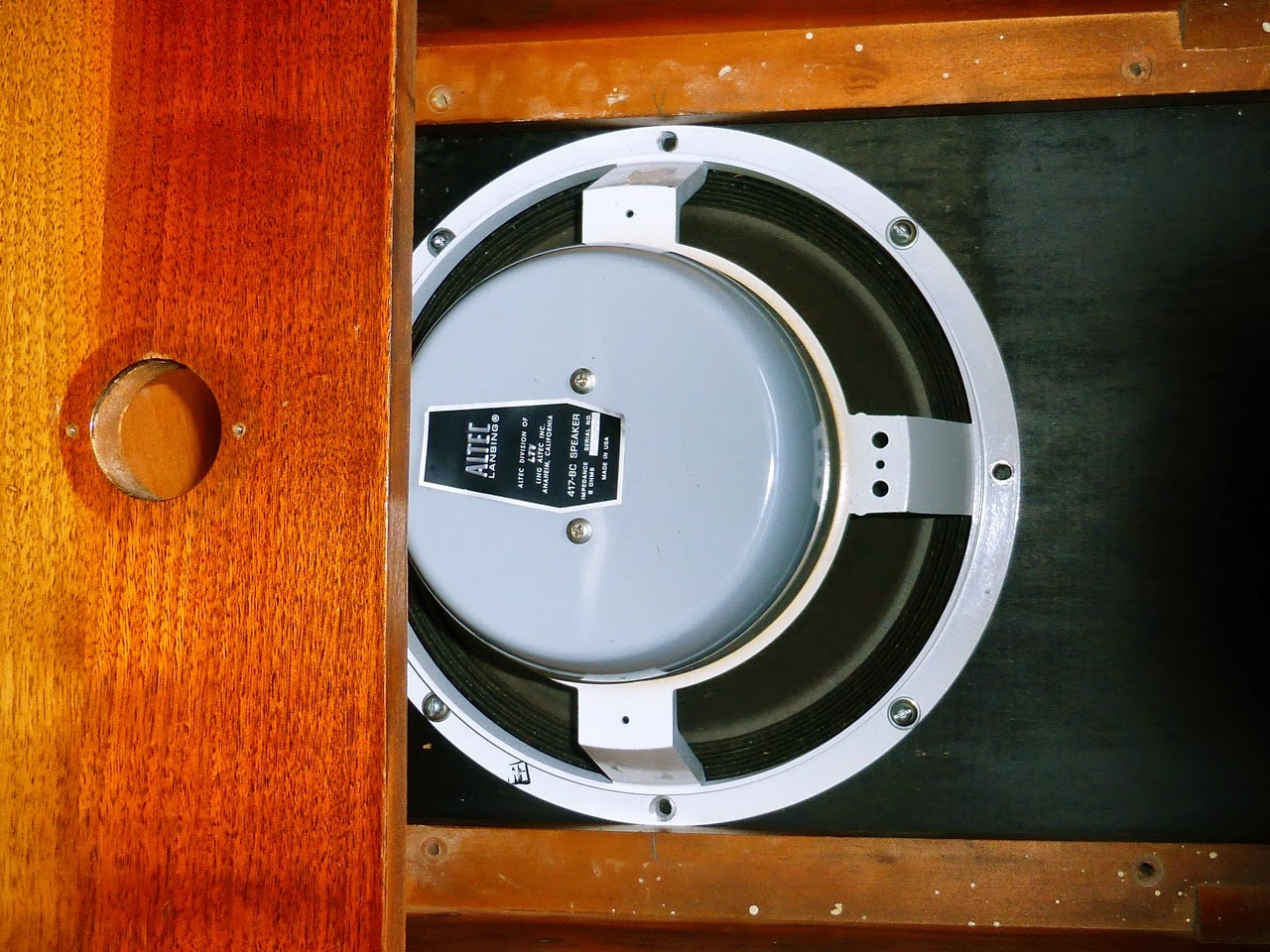 I marked the cleats where a small amount of wood needed to be removed, and pulled the cabinet up off the baffle again.  Looking at the cab from the front, the lines were then extended - it's a lot easier to work from the now-open front, rather than through the back: 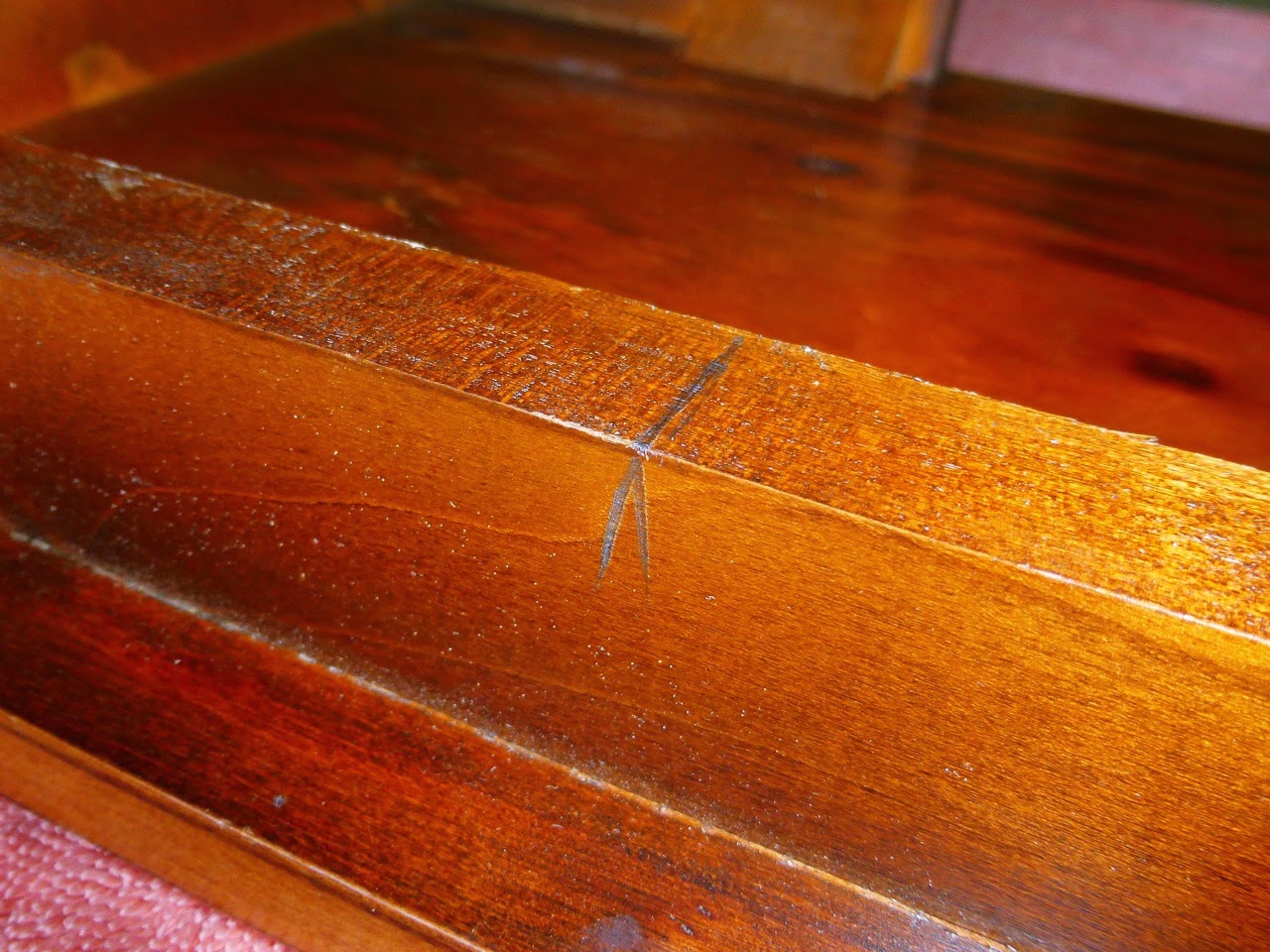 Just a few light passes with a rasp, and the deed is done: 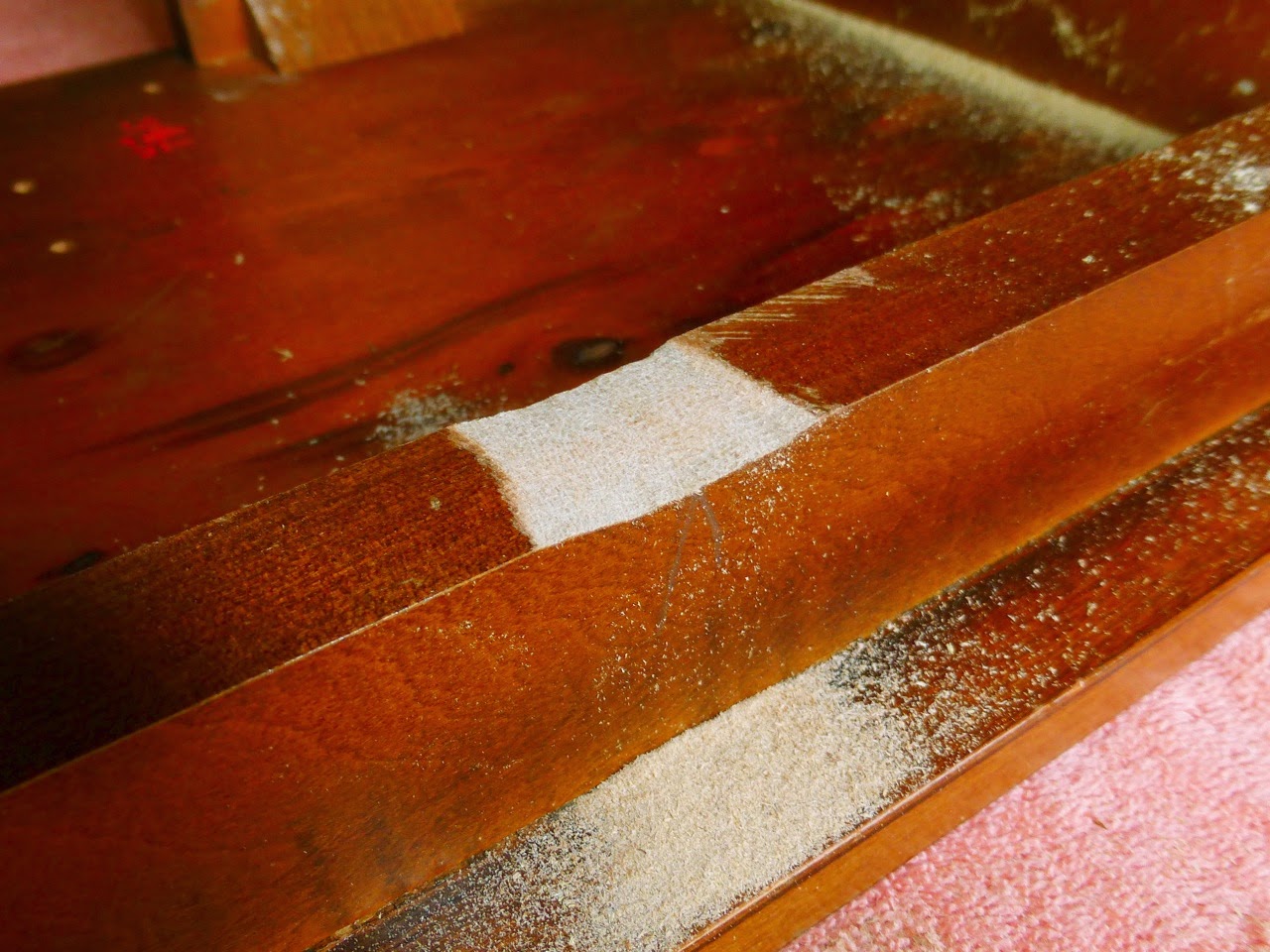 Okay, I can hear some laughter in the back rows.  Damn it, Jim, I'm a hobbyist, not a woodworker.  Not very much wood needed to be removed, and the baffle, with the Altec, bolted back to the cabinet easily: 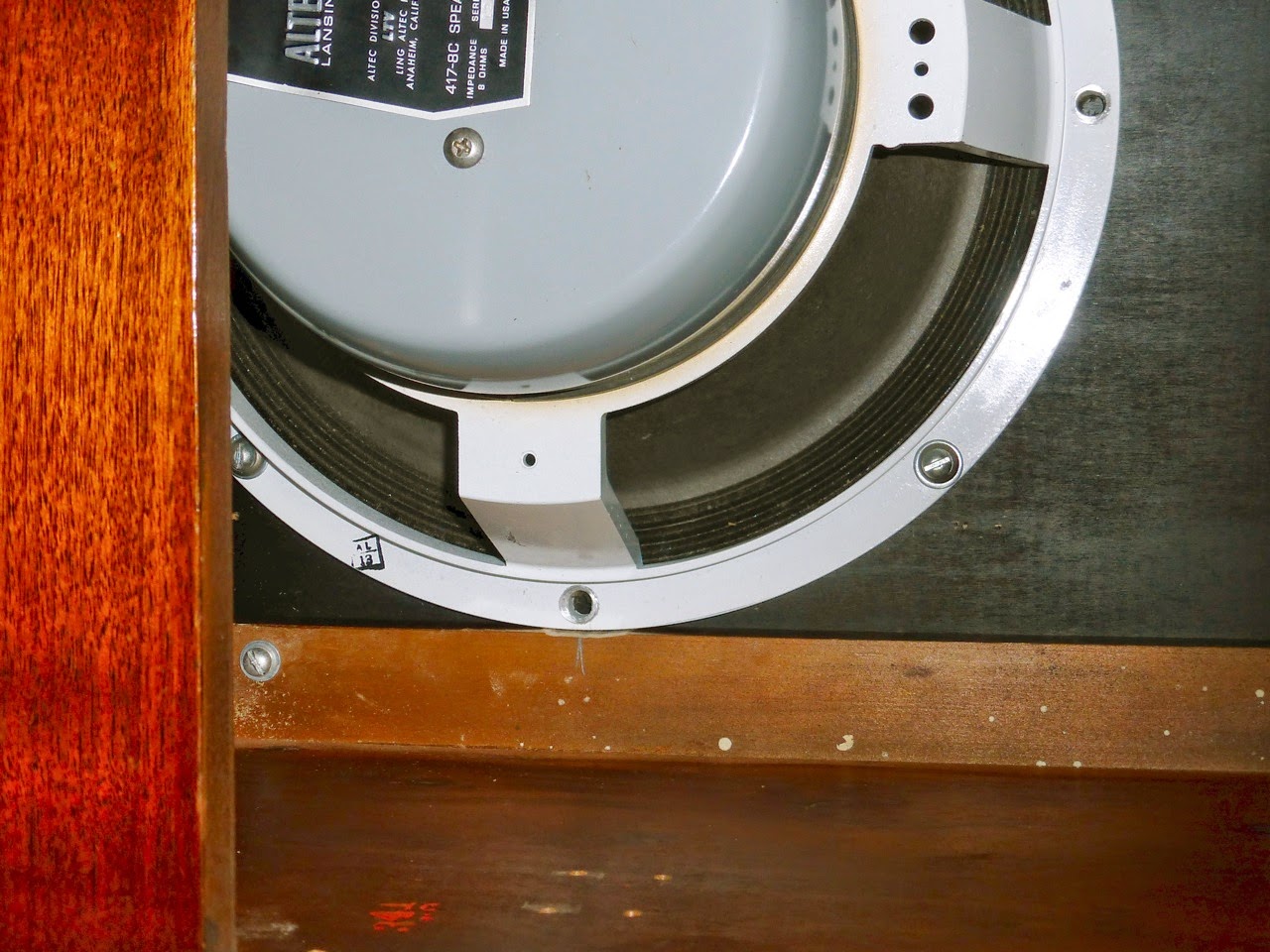 Here's a shot of the aluminum dome peeking out through the cool vintage grill cloth: 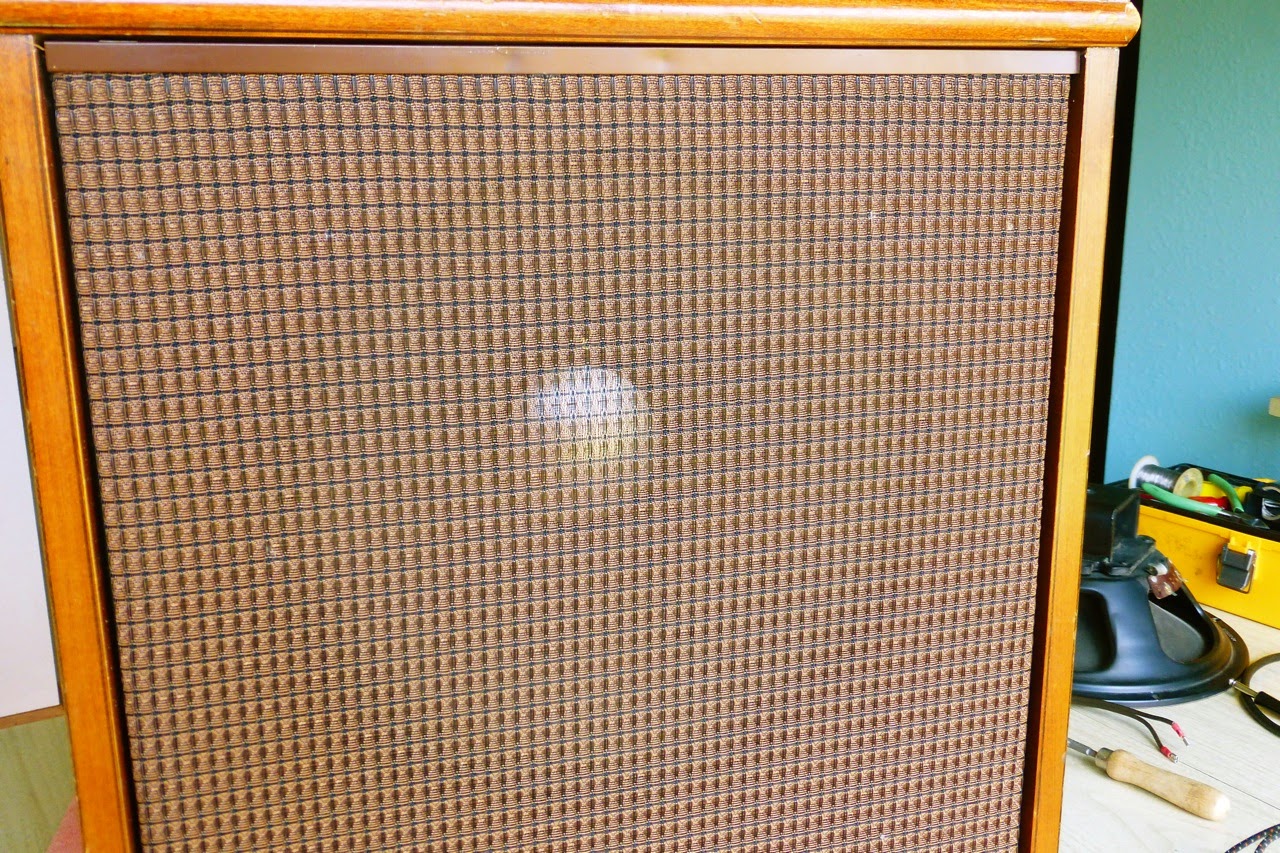 The speaker is now 4" higher, and almost to the top of the cab - closer to ear level is a good thing.  Since the Altec has push-on terminals, the spade lugs on the wire are now unneeded - I cut the cable 4" down, stripped the insulation, and tinned the wires for a firm fit in the terminals: 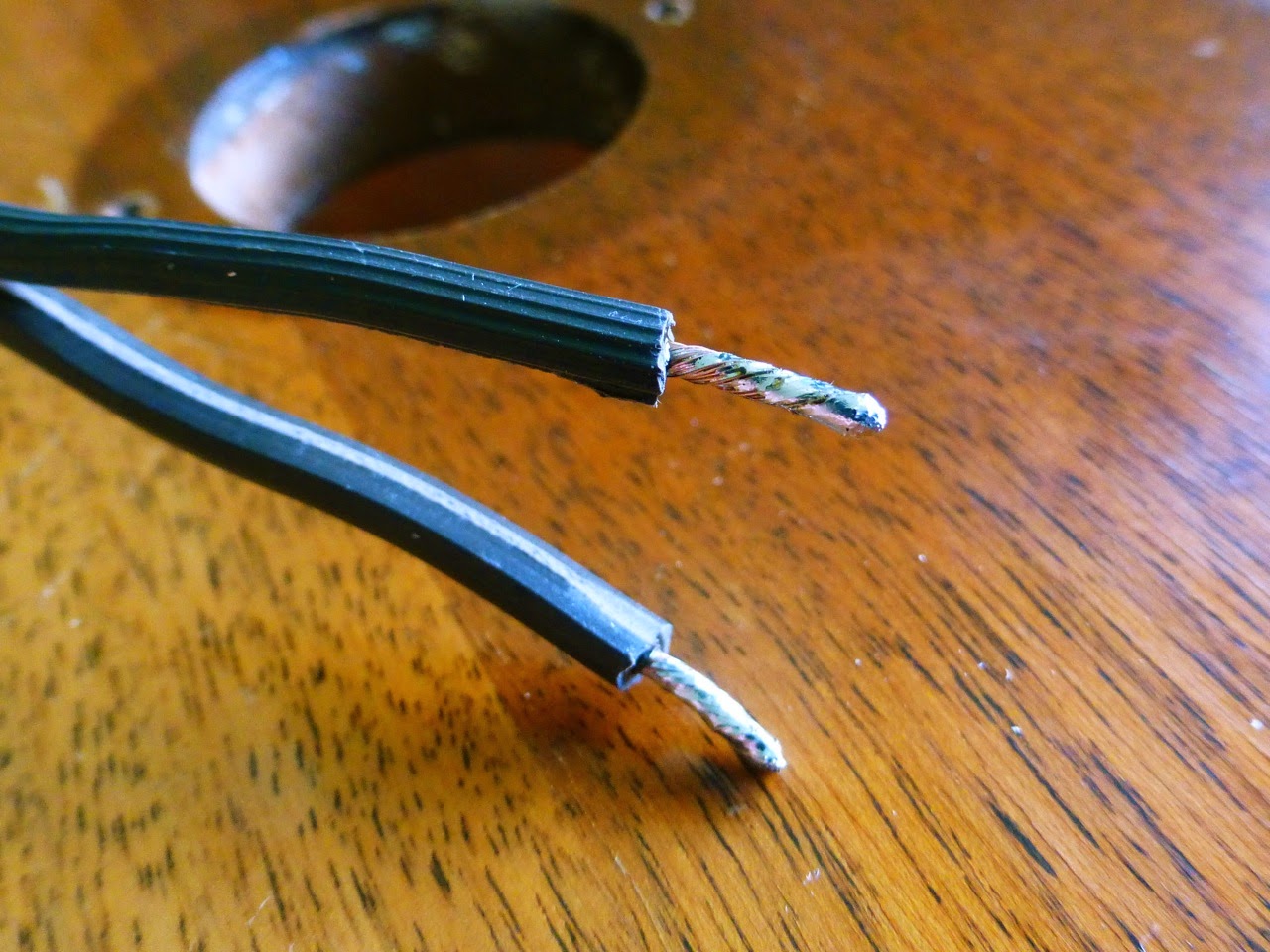 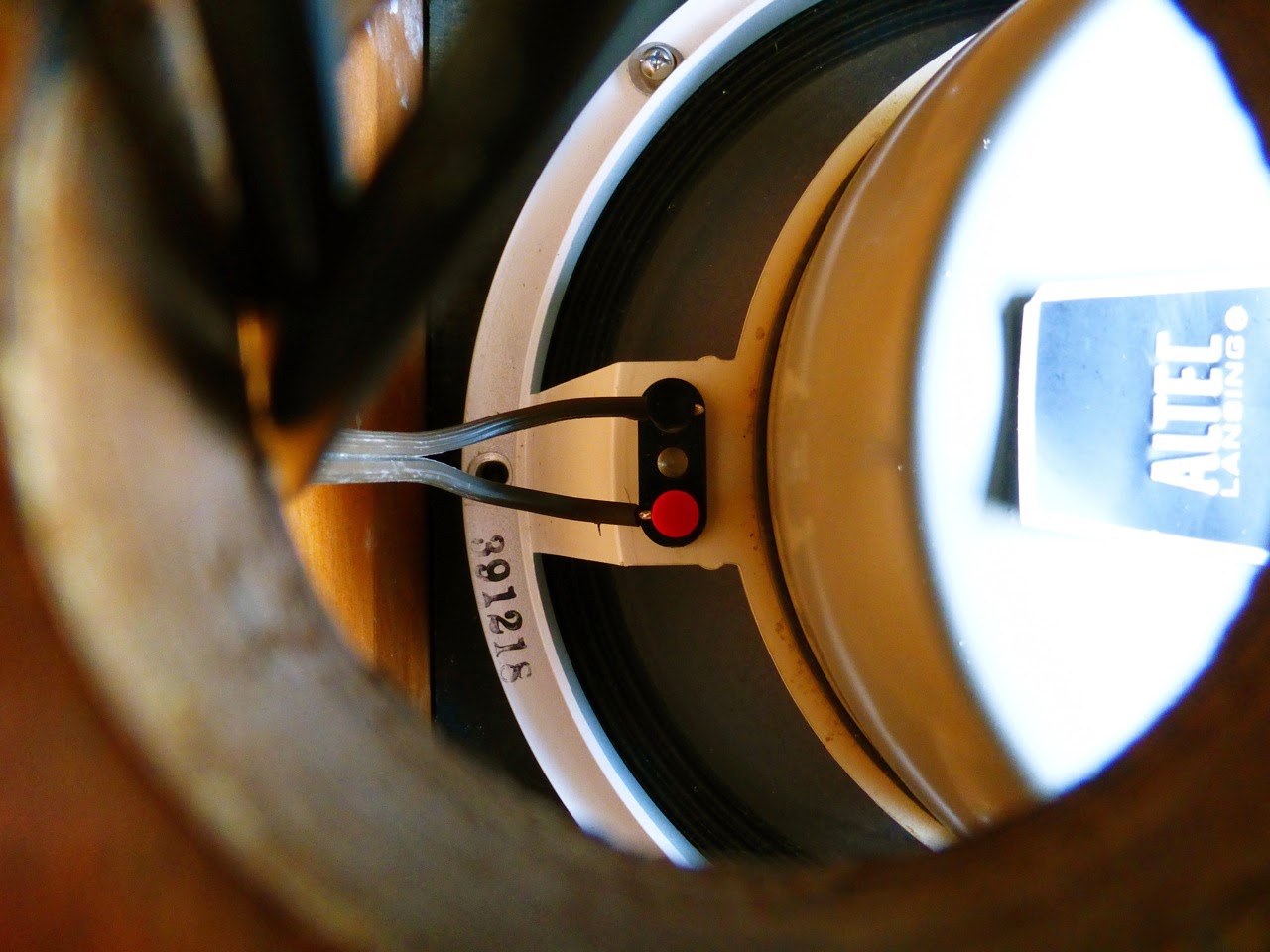 Next step - replace the cup with the jack in it, place amp head atop cabinet, hook up a short speaker cable, flip the power switch, and while the tubes are warming up grab a guitar and plug it in, hit the standby switch, and rock out.  Well, better just "folk out", since it's after midnight: 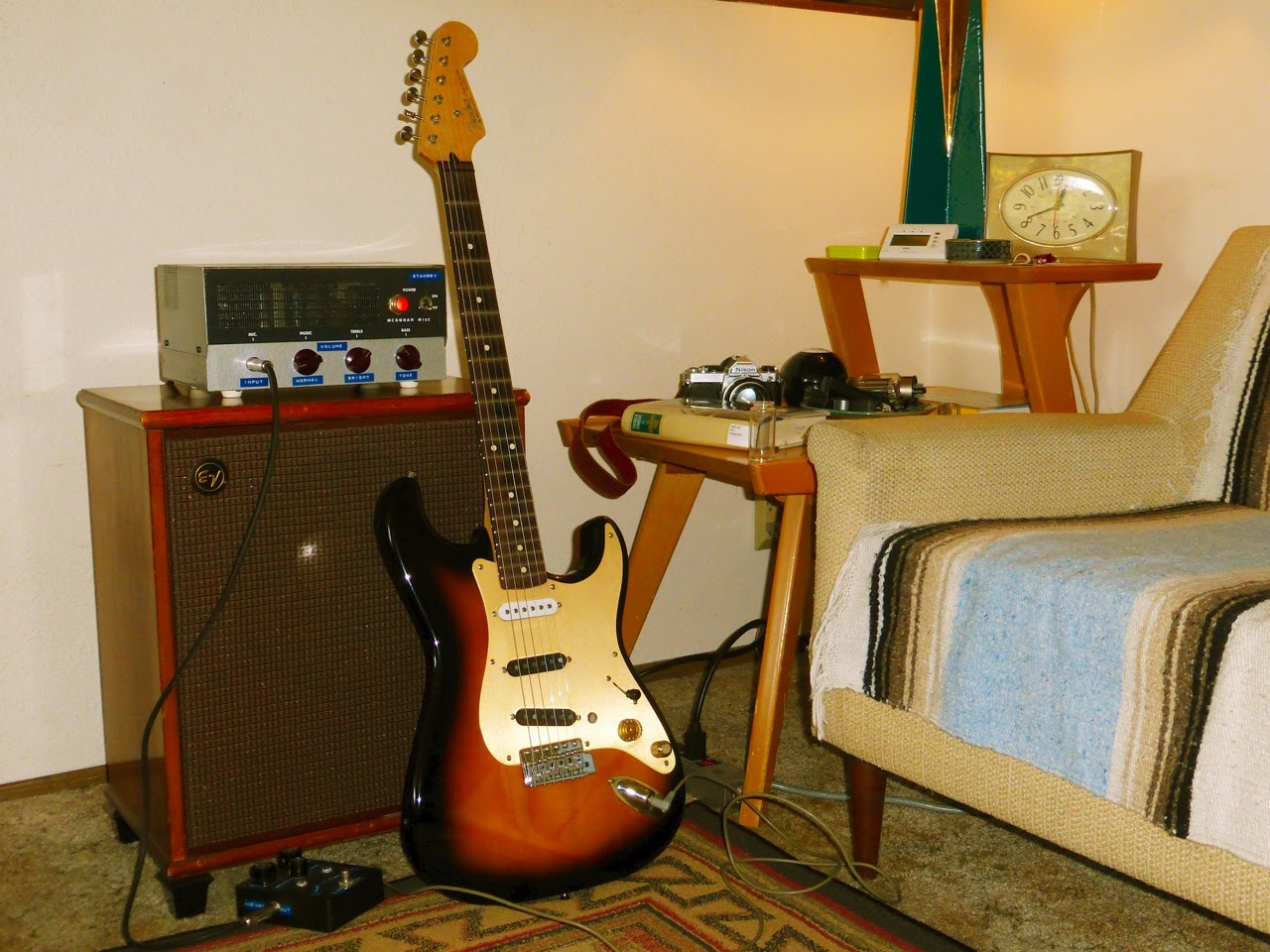 Here's a couple initial sound impressions: this cab is unbelievably tight - you can totally crank the volume, and there are no rattles, buzzes or wheezing.  As always, the Altec sounds killer - it has ever since it was new, and long may it run.  And since this speaker does very well in a Deluxe sized open backed cabinet, it's totally at home in the Hammond cab.  As a living room and home studio amp speaker cab, this combination is perfect, couldn't ask for anything more.