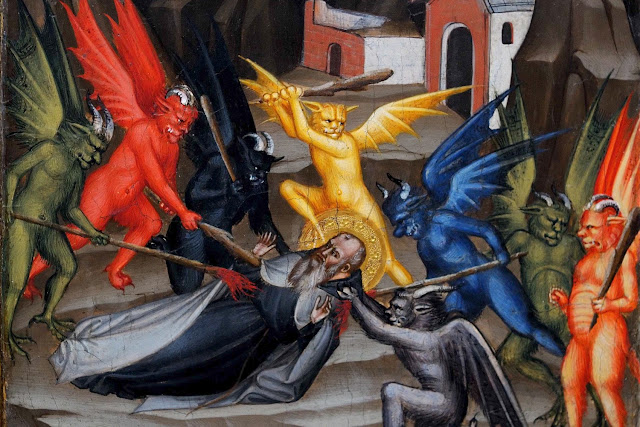 It's October 31, and here in the U.S., that means it's Halloween. For most of us who live in a post-superstition world governed by rational thought, Halloween is a festive time, when young (and not so young) kids can get into costume, go trick or treating for candy from the neighbors, and generally have a lot of fun. For those who live in a less scientific, less logical place in their minds, Halloween is a dark and truly scary time; so much so that a surprisingly vocal part of our society has called for the abolition of this national custom. I've written about that previously, in a post entitled Angels, Demons, and Charter Schools.

There's an article in today's edition of the UK newspaper Independent that highlights a recent survey conducted in Florida by Public Policy Polling. Among other interesting points, the poll finds that "40 per cent of Donald Trump's supporters believe his White House rival Hillary Clinton is an "actual demon". "  Not a figurative demon, but an "actual" one. So, let that sink in, and while you're at it, try to remember that we're living in the 21st century. It seems that a whole lot of people have been drinking from the vat of toxic political Kool Aid.

On one level, it's amusing to think that there are so many people in our country that continue to have lives that are controlled by superstition and dread. I mean, most of us pay good money to go to a theater so we can spend a couple hours being immersed in, and being thrilled by, a filmmaker's imaginary world full of dark and sinister forces. These people, on the other hand, live in those dark spaces 24 hours a day, and they don't even have to pay for that experience.

Another entertaining question in that same poll finds that 75% of Republican voters believed that their nominee "respected women, with only nine per cent disagreeing with the idea".

But getting back to reality, if that's possible here, it's more than a little disheartening that so much of our national discourse, not to mention the important decisions affecting the future of our country and the rest of the world, is being influenced and sometimes controlled by a not inconsiderable portion of the population who believe in the existence of demons, whether or not they think those creatures are running for public office.

Remember, the election is only eight days away. Happy Halloween, and may all your nightmares be good ones!