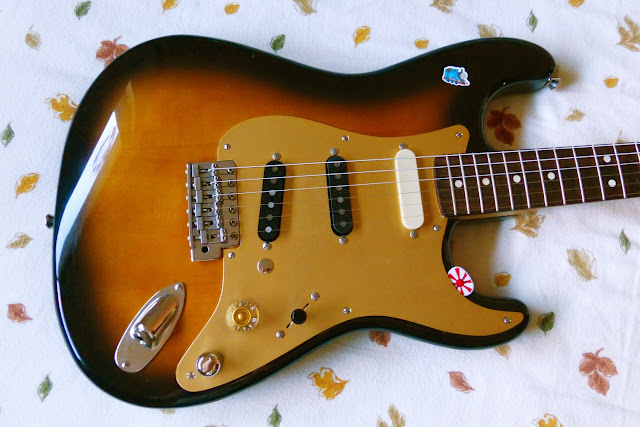 It's been over a year since Pt 3 in the series of posts about the Strat-O-Franken-Caster project, mostly because for the most part it's done. Good enough for rock and roll - it stays in tune, plays well, and really screams when you lay into it. And the combination of the flat top Duo Sonic pickups, mounted on a gold anodized aluminum pickguard instead of plastic, give it a unique tone that's unlike most Strats - the bridge pickup sounds very Tele like, and none of the switch positions have that thin hollow "quack" sound usually associated with a Stratocaster.

So there's been a couple changes, but nothing major:

First, I sent away for another Duo-Sonic pickup to put in the bridge position. This new one is a bit hotter than the one I had in there, always good to have a bit louder pickup near the bridge. In the photo at the top of the page, it's already been installed, and the pickup that was in the bridge slot was moved up to the neck position to replace a no-name ceramic, so now it's all Duo-Sonics, all the time. And since it's lowered for equal volume with the other two, there was enough space under the strings to put a Duo/Mustang cover on it. Why? Because it looks interesting, no other reason. I kept the middle pickup where it was  - it's on more than the others, and this particular pickup is really great sounding, so I got superstitious and didn't want to anger the tone gods.

Next, David in Massachusetts sent a Japanese made Gotoh nickel plated jack boat: 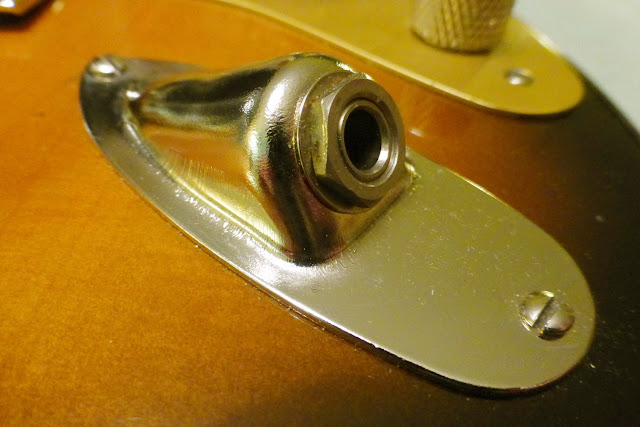 It looks much like the chrome plated Fender jack cup that was on there, except... more nickel-y. In the picture you can see the ancient ("vintage") Switchcraft jack from who knows when. Rather gnarly, dude. 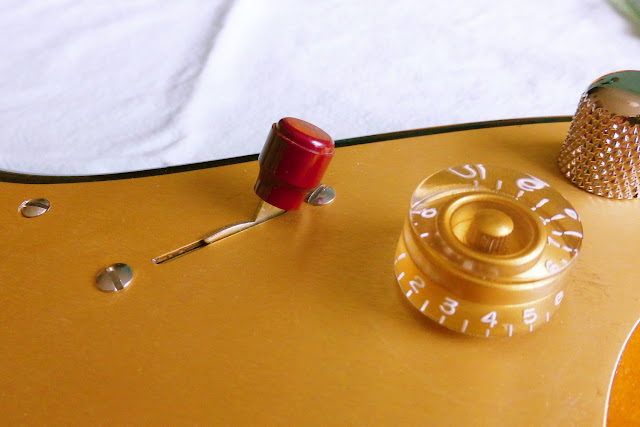 It's a 1950s Daka Ware barrel knob in a dark red color. Actually way, way cool and uniquely different, and that's a good thing - who else has a maroon barrel knob on their Strat? Nobody.

Also changed the headstock string guide from the original bent sheet metal tree that came with the neck, to a round machined nickel one. Looks cool: 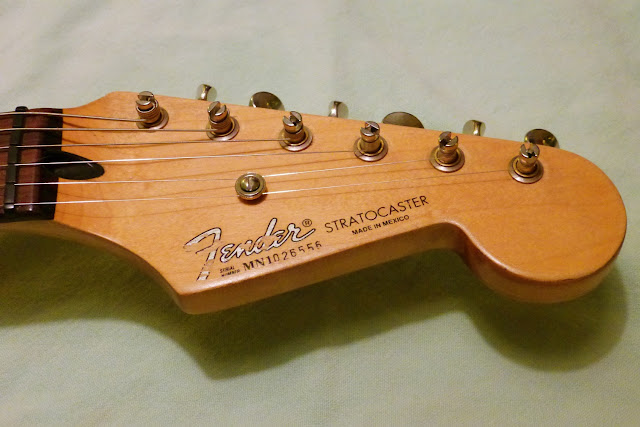 It's a brand new Fender brand guide, nothing special, except for the story that came with it. I went to that big box chain Walmart-of-music-stores place (won't say the name but it rhymes with Guitar Center) and asked the guy in the accessories department if they had one of the vintage style round guides. He said yeah sure, and took it down from the wall, but before handing it to me, he asked, "So what kind of Telecaster are you puttin' it on?"

Me: "Uh, actually I'm going to install it on a Stratocaster."

Accessories dude: "It's gonna really screw up your tuning, man!"

"Really. I thought all the mid '50s Strats had these same round string guides."

He looked at me, shaking his head and smiling with the pitying look that only the truly sanctimonious have. "I don't think so. Who told you that?"

"They were probably fakes! Anyway, it's a Tele part, not for Strats, so you don't wanna do that."

After I paid for the guide, he finally handed it to me and said, rather smugly, "You'll be glad you didn't put that on a Strat, you'da been sorry!"

The world is full of experts lately. No matter, I walked out of the store with the round vintage style string guide, and I should have gotten it for free, after all that. And have I had any tuning problems since installing it on my FrankenStrat? No, and I never thought I would.

I've been thinking about getting a Strat-sized lipstick pickup for awhile, mostly because its chromeness would look great against the background of a gold anodized pickguard. Found one on eBay, and it turned out to be kind of a difficult install. The good news is that it fit in the slot, barely: 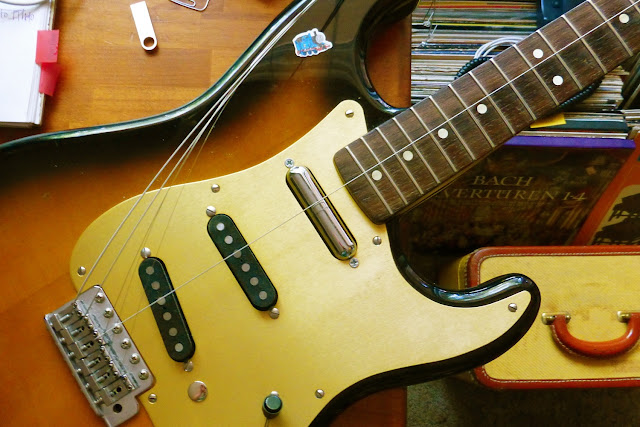 The bad news was the mounting screw arrangement. The pickup mounting tabs were drilled and threaded for the smaller size that's used for humbuckers, and that's what kind of screws were included. Not only were they too long to fit in the body's pickup cavities, but the heads were so small they slid right through the larger holes in the Strat pickguard, which is a regular spec Fender-brand part. I had to re-tap the pickup to accept Fender sized screws, and luckily the local hardware store had some flat heads in the correct gauge and length, although in unplated steel. I would have preferred slotted nickel oval heads, but can't have everything, at least locally, that same day.

This lipstick pickup sounded good enough, although not as good as the ones in my old Danelectros. However, it was way underpowered, and no way was there going to be any balanced multi-pickup combo positions. 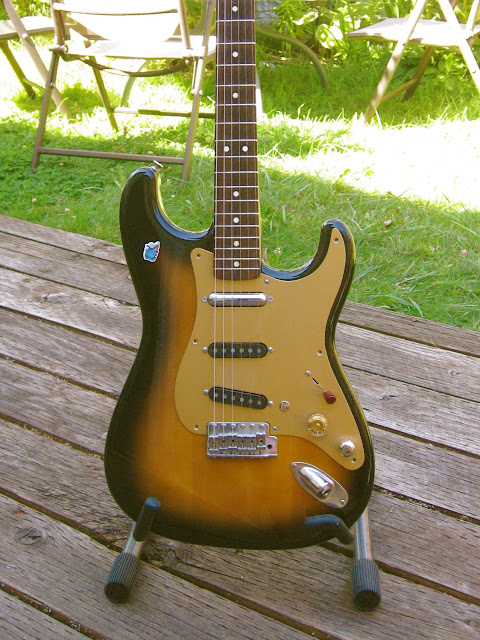 Oh well, kept it in there for a couple weeks, trying to get used to it, and justifying it staying with the fact that it looked great. But one day I swapped the lipstick back out for the other Duo-Sonic pickup, and sold it on craigslist in a couple hours, for $10. Guy who bought it was ecstatic, going to put it into an old Roy Rogers small acoustic that someone else had already messed up with a few holes in the top. Overall, the lipstick was an interesting experiment, too bad it didn't work out.

Probably, there's just one more mod, and that's putting in a brand new Japanese Gotoh vintage-style trem bridge, and then that's it, I'm done. Until I think of something else.

If you want, check out the other posts on the build of this Parts-O-Caster: Pt 1, Pt 2, and Pt 3, and maybe also some of my other guitars. And if you have some extra time, head over to the Topics field in the right sidebar, where there's more guitar related stuff.