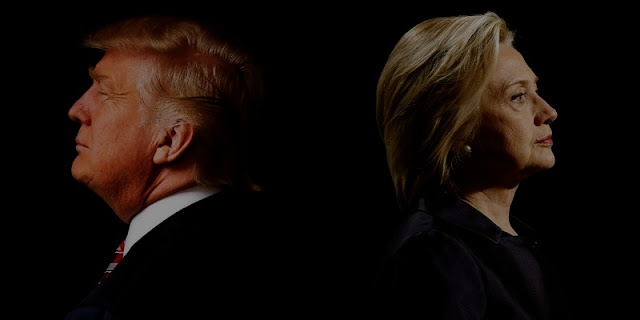 Usually, I approach doing a blog post sort of like writing or arranging a song - lay down a riff, and then let imagination and inspiration take over, and build the rest up from there. It's been an uninspiring week, and even now, it's tough to get started, hard to find a riff. And it's not just me; all around my town, and all over the country as well, there are a lot of otherwise happy and energetic people who find it hard to get up in the morning, difficult to eat with any real appetite, hard to sleep through the night without waking up worrying about the uncertain future. Even though I've had way more than my share of really crappy behavior thrown at me through the years due to my heritage, I can't imagine what it must feel like to be part of an immigrant or refugee family at this very moment.

For many millions of us, this is the closest that we've ever come to feeling as if we live in a time of existential crisis. And it's not that we all share just one issue or concern - almost everyone you talk to has their own point of view on how the results of the election threaten to upend any sense of security in their lives. Racial and cultural minorities, members of non-Christian religions, those with alternative sexual orientations, anyone concerned with women's reproductive rights or climate change or awareness of the fragility of the network of multi-national non-aggression treaties, all those and more - all are facing a very clouded and unknowable future.

If history is any judge, at least in recent American history, hopefully nothing too disturbing will happen. All of the socially charged and violence inciting rhetoric that came out of the President-elect's oddly shaped mouth may prove to have been merely campaign bluster, and that he really doesn't have authoritarian or dictatorial urges, and possibly, no deeply rooted convictions of any sort, besides his own desire for self-enrichment. If that's true, in the long run we'll be okay, although somewhat poorer. But in the meantime, those of his supporters who were lathered up into a fine froth of bigotry and hate are having their own brand of fun. 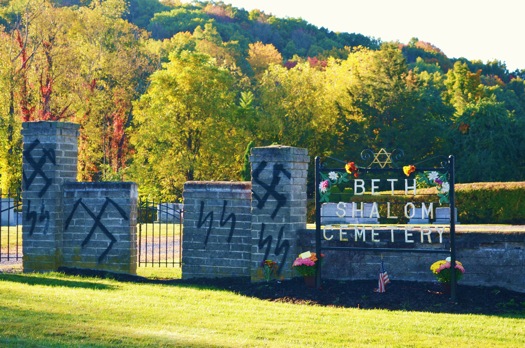 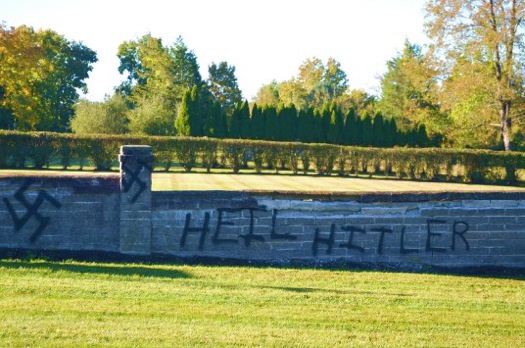 So far, the only connection between this incident and the Trump campaign is that it happened in "Orange" County.

The 100+ year old African-American Hopewell Baptist Church in Greenville, Mississippi was spray painted with an election campaign message, and then set ablaze: 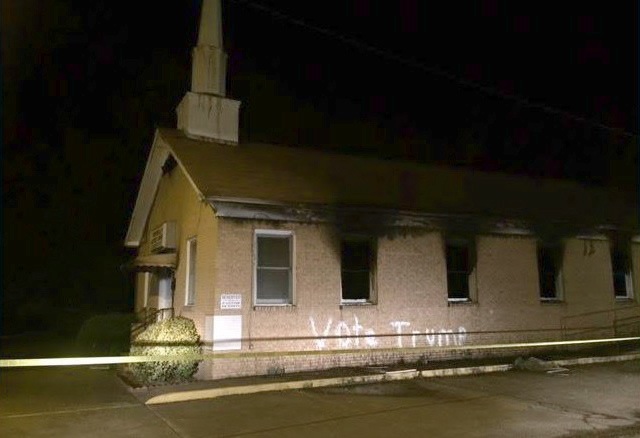 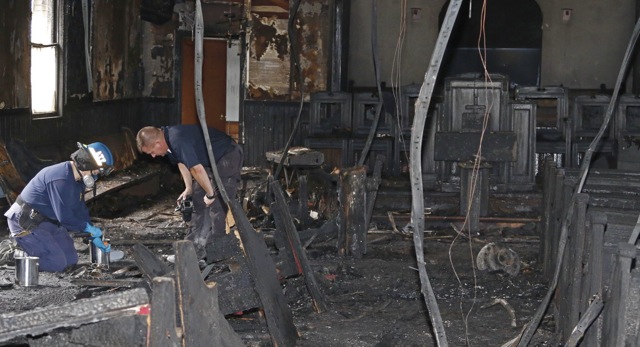 Local authorities are investigating the incident, although it is being assumed that this was the work of "just some teenagers letting off steam". Sources in the area say that if it had been adults who committed the crime, they would have used explosives.

Ayman Mohyeldin passes on an email received by journalist Hannah Allam from a Senate staffer: 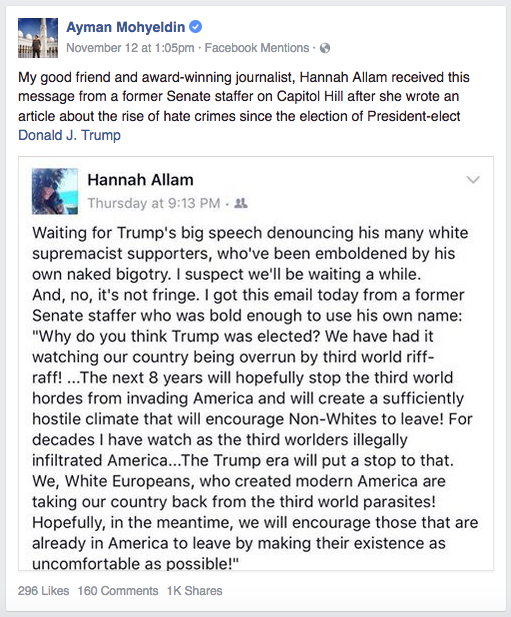 And in the hills of West Virginia, two local dignitaries in Clay County are happy to give fashion advice to the First Lady, and the First Lady elect: 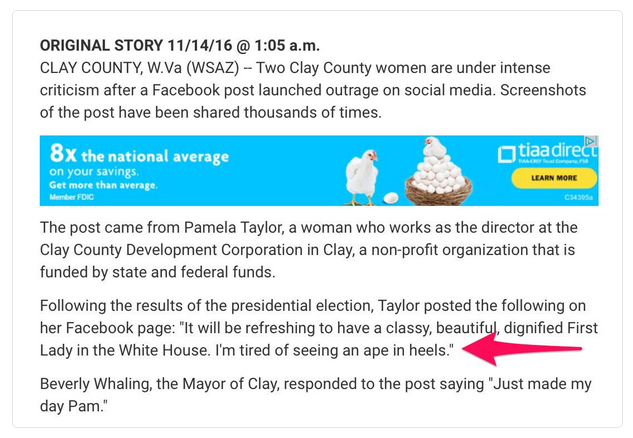 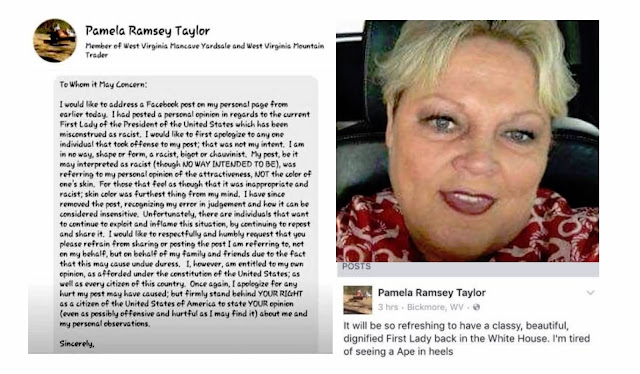 My local correspondent, an expert in Southern culture, assures me that these are just a couple of high spirited Virginia belles, and we shouldn't take too much offense, since "that's just the way they talk down there."

Here are the two First Ladies: 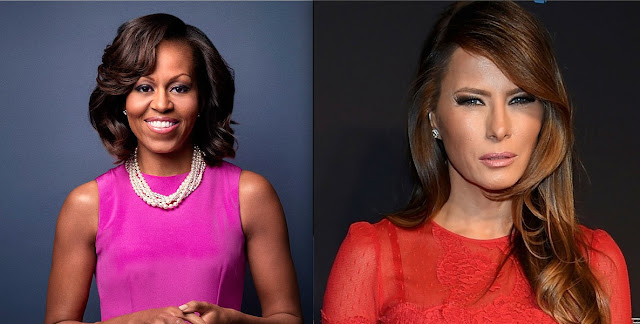 Over the past eight years, Michelle Obama has become a familiar face to everyone in America. On the other hand, so far no one knows what Mrs Trump actually looks like.

As of this writing, no one has yet lost their lives in any of the various practical jokes, hi-jinks, church fires, and mob beatings done by America's new winners; hopefully, there won't be any. It's kind of depressing to think that the fate and future of our (already) great country has been decided by the kinds of people that leave really nasty comments on YouTube and Twitter.

In the 227 years of the history of the Presidency of the United States of America, every one of the prior holders of the office have been, no matter how you may feel about their politics and policies, all of them gentlemen. This year, a man who is the epitome of ostentatious vulgarity, nothing like a gentleman, has been elevated into power with the help of his minion Vulgarian hordes. I don't think those hordes are going to let us, or him, forget that fact any time soon.