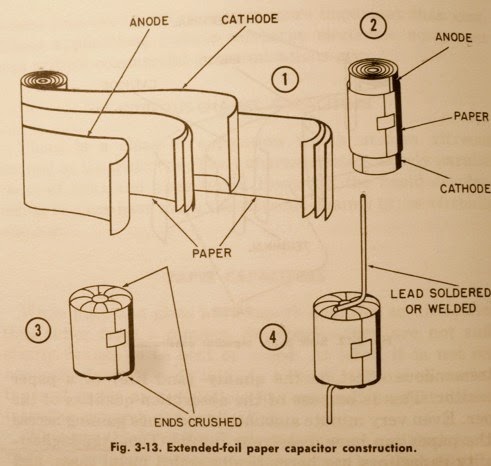 In Part 1, we made a guitar tone capacitor testing rig, and auditioned some caps.  In this installment, we'll audio test a few more caps, and also have fun taking apart and studying the construction of one the most iconic tone caps of all time, the famed paper and foil in oil Sprague "Bumblebee".  Speaking of which, although most everyone today calls that type of capacitor "Paper In Oil", we can see by looking at the above scan from Sprague's vintage literature, that they were originally termed an "Extended-Foil Paper Capacitor", when they were being manufactured. 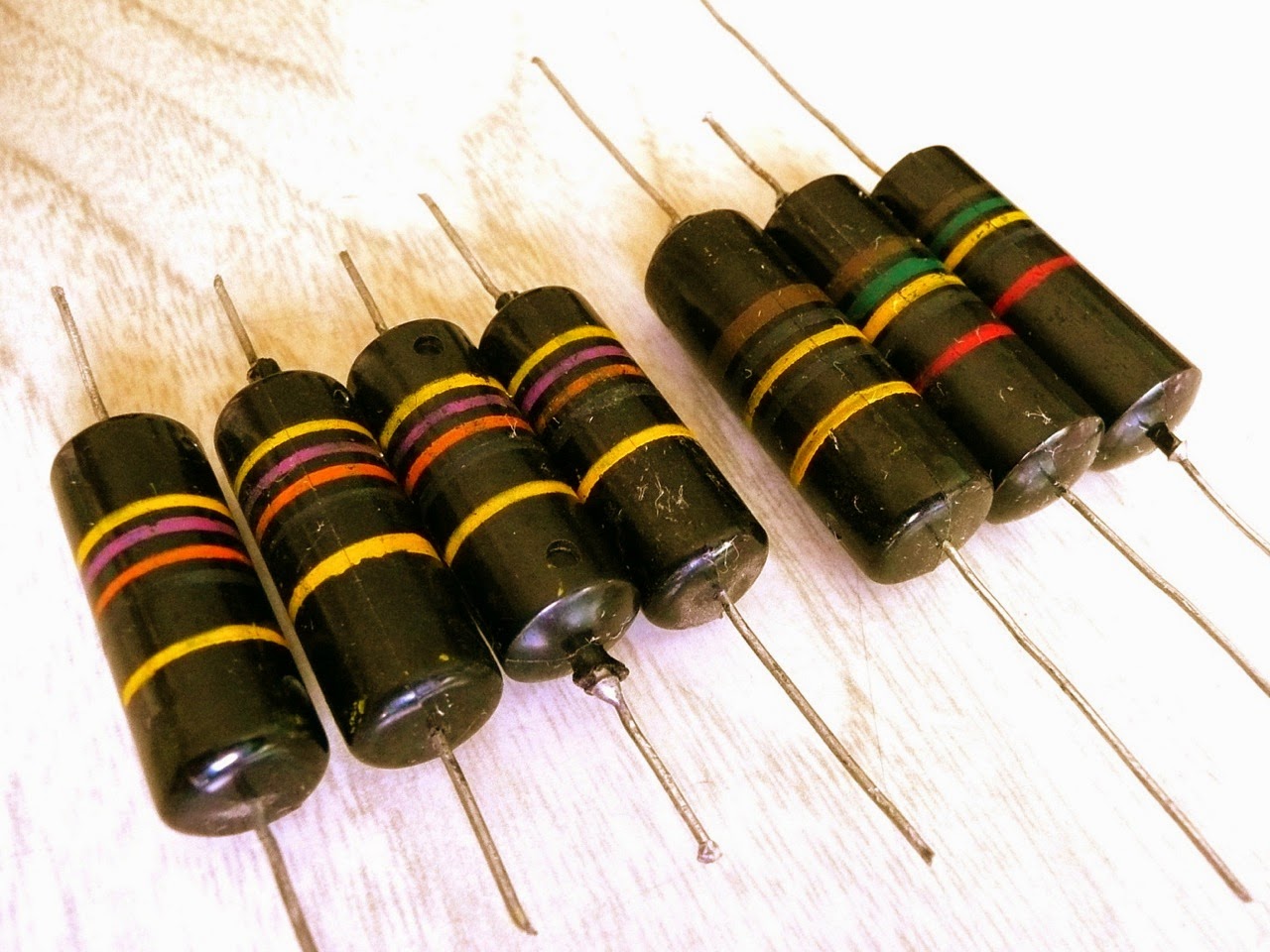 We'll take an already dead Bumblebee, crack open the outer casing, and unroll the foil and paper inside: 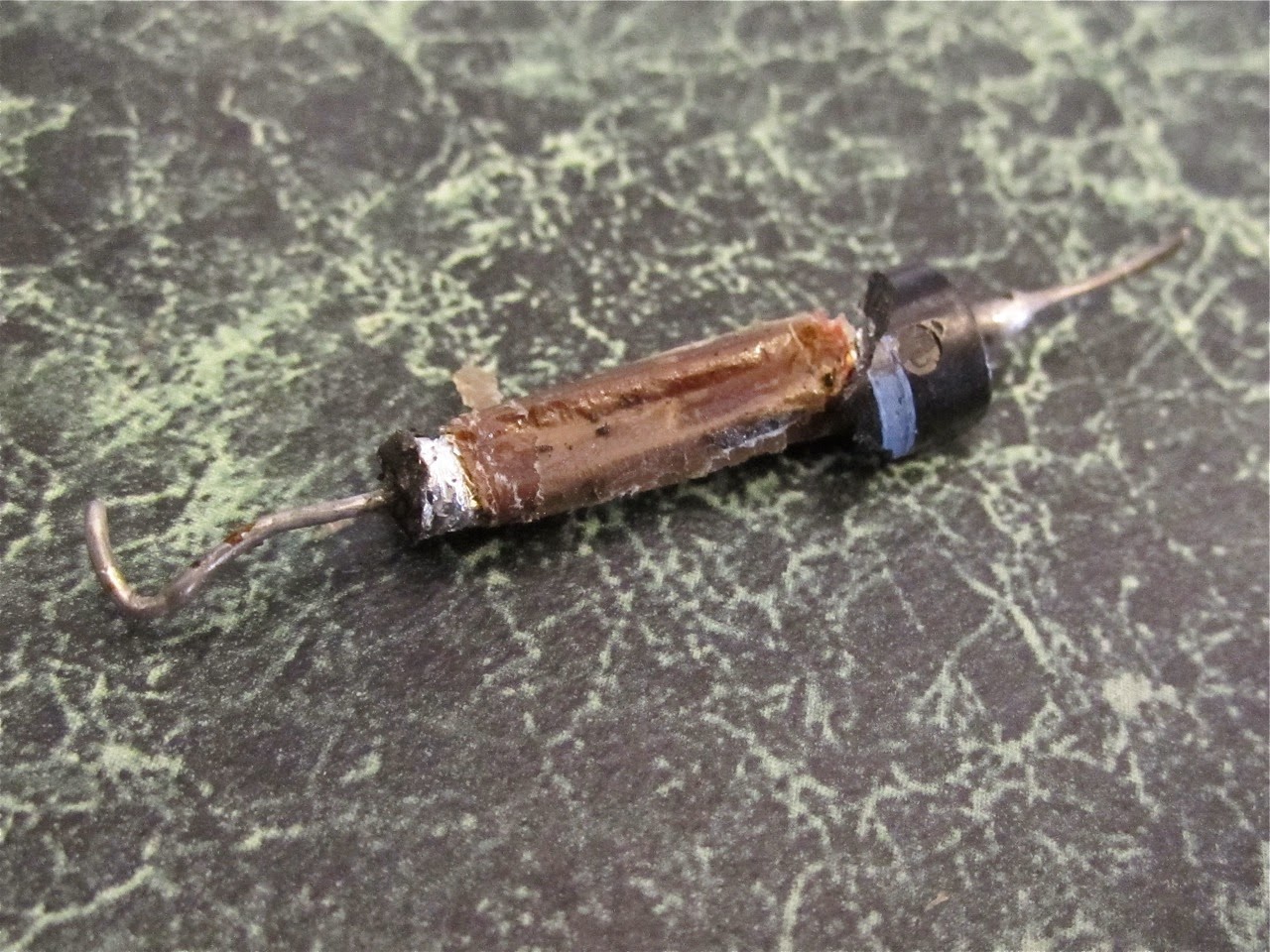 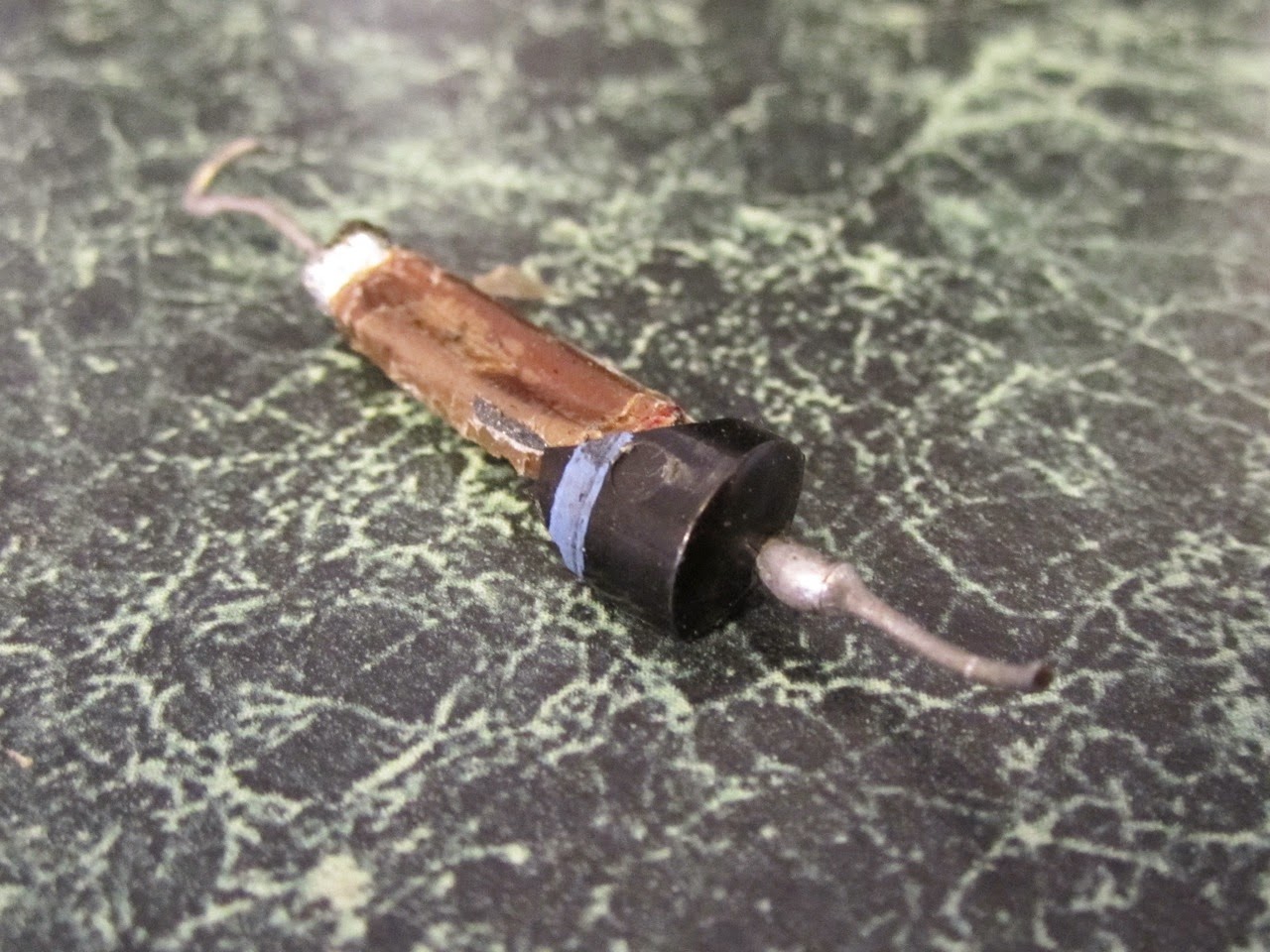 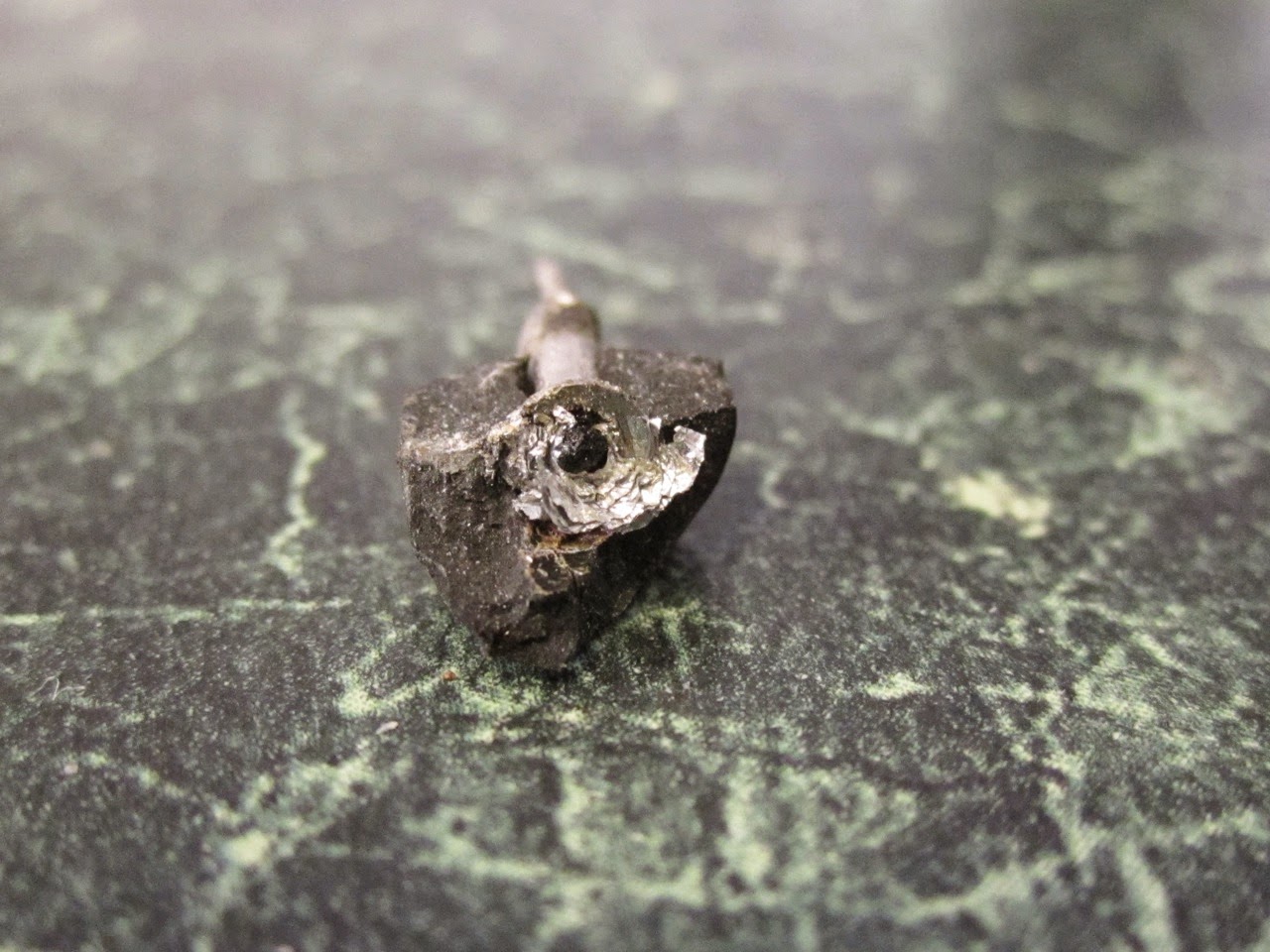 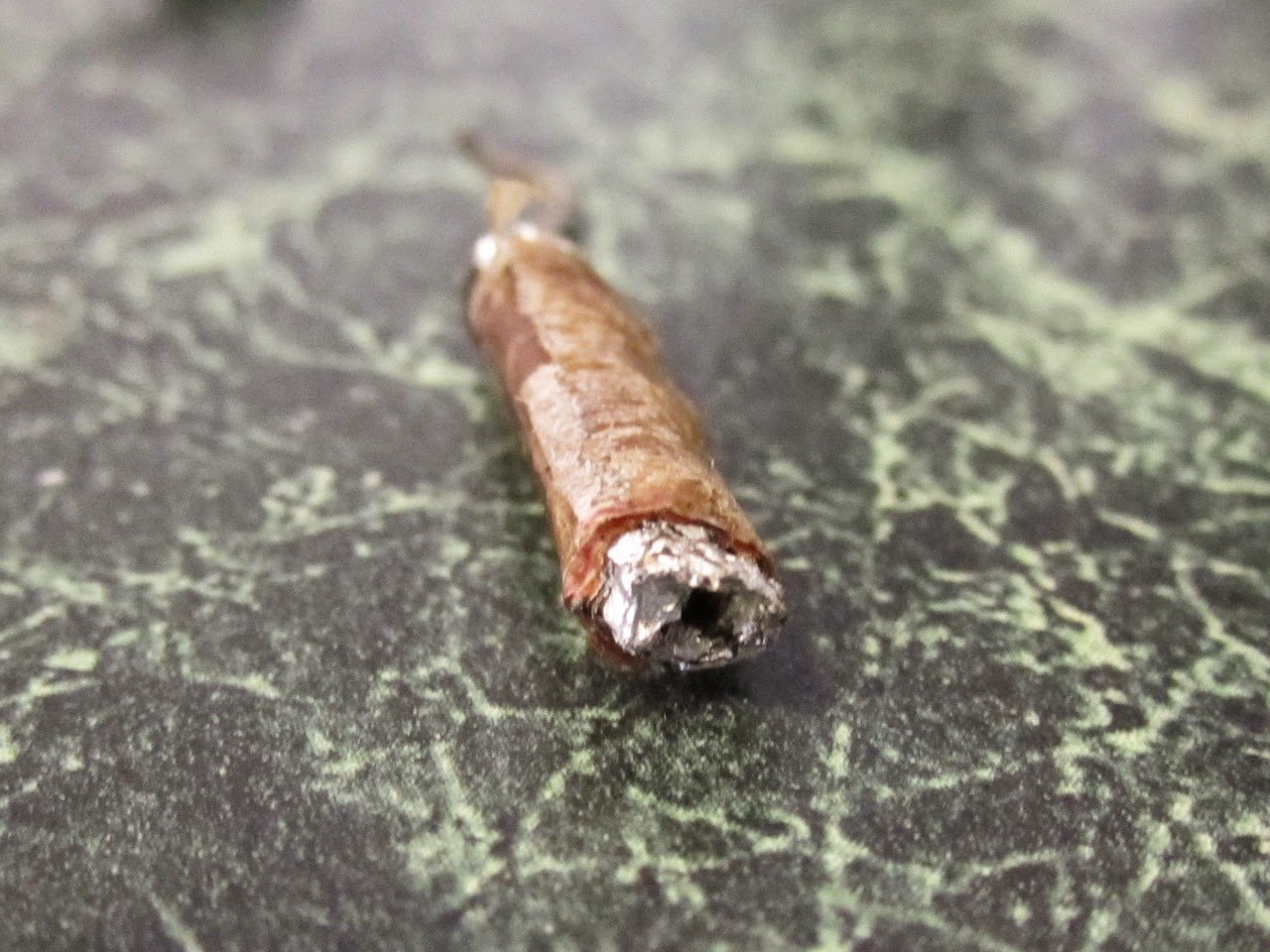 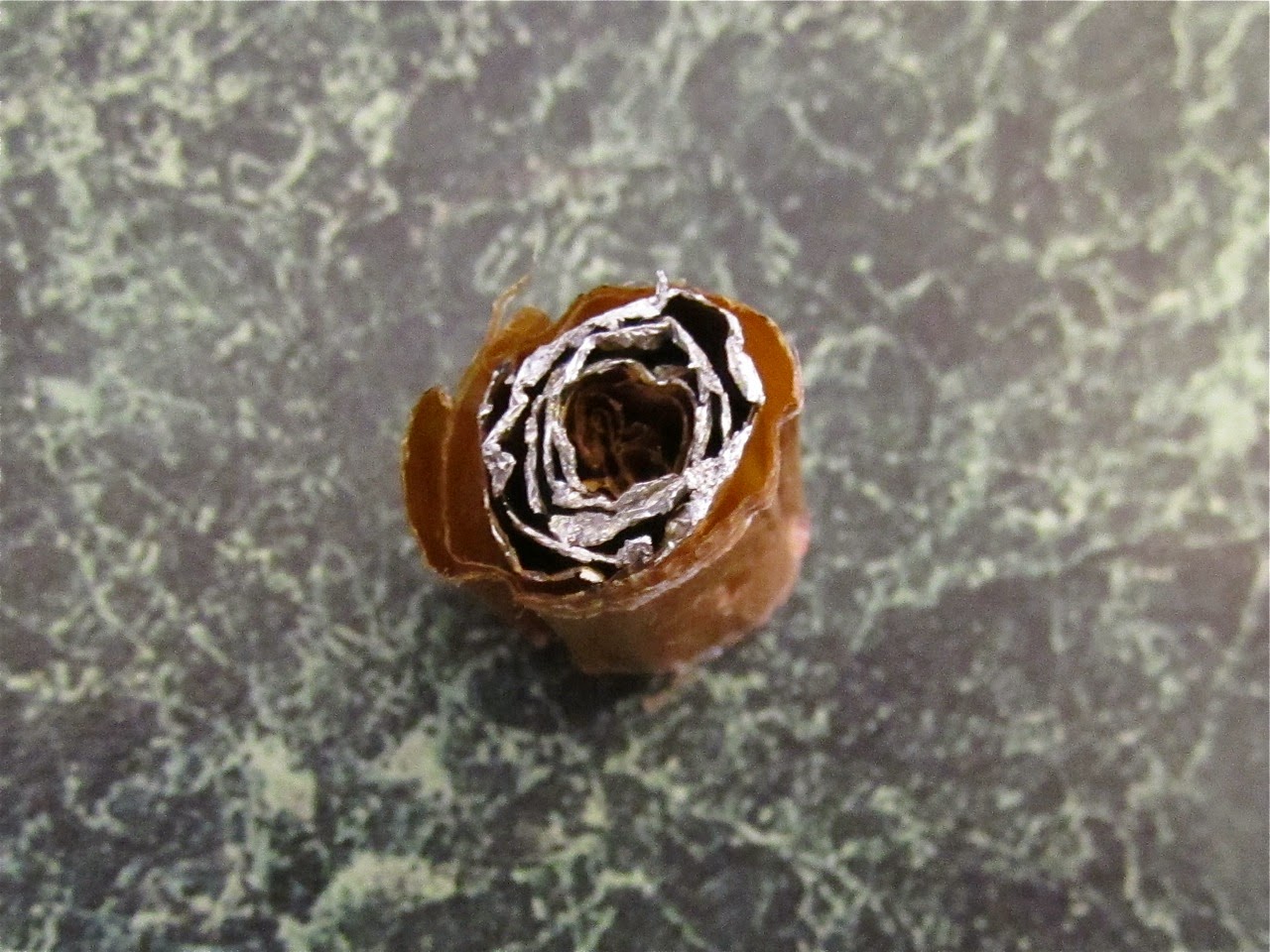 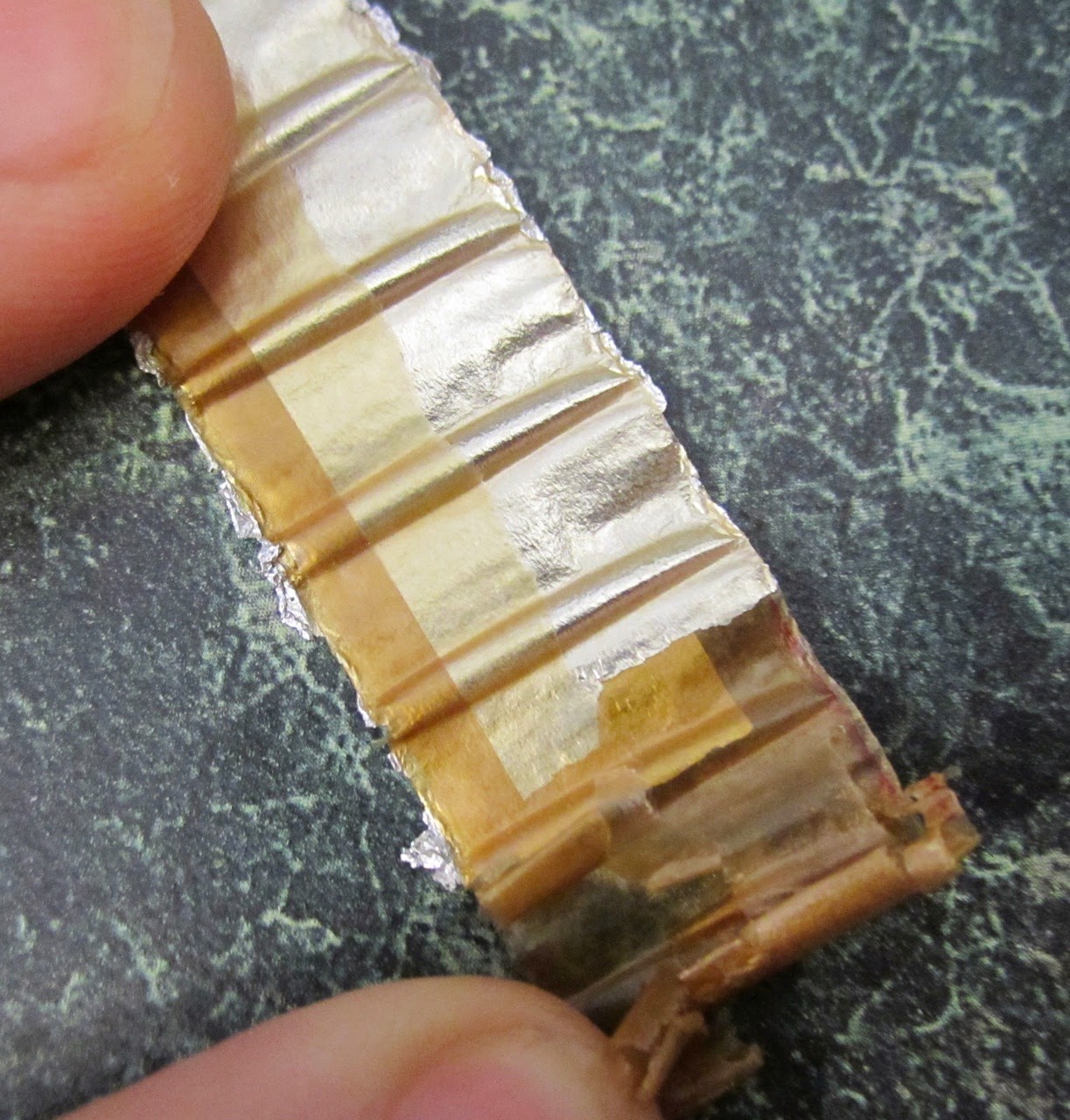 Well, that's it!  Hope that was fun for you, too.  Thanks to David in Massachusetts for the use, and abuse of, a vintage Sprague Bumblebee.

Now, let's get back to tone testing some capacitors.

At this moment, we have no live Bumblebees to audition, but we do have four of the Sprague capacitors now known as "Black Beauties", and an ancient .1uF Sprague "600 Line" cap from the 1930s.

Here's what we're going to use for doing real time audio testing of various tone capacitors: 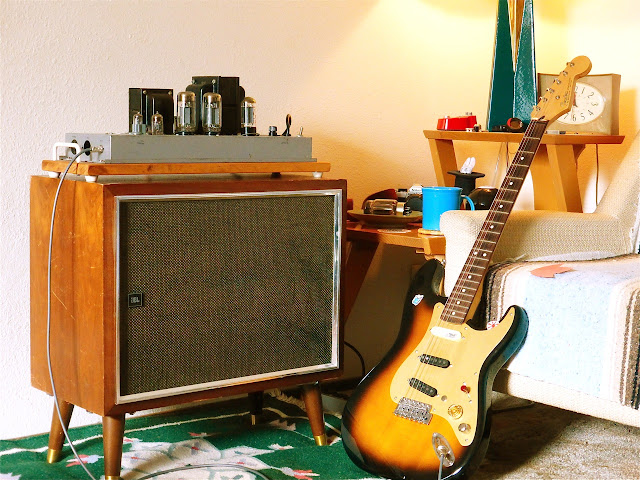 The Strat Parts-O-Caster has a mid '90s Fender MIJ body, a '91 MIM neck, Classic Vibe pickups, mostly Japan-made bits and pieces, and currently has no tone control, but it's looking for a nice tone capacitor to settle down with.

The amp is a completely rebuilt 1954 Conn organ amp chassis, rewired with a slightly altered late '50s 5E5 Pro circuit.  Like the Strat, this amp also has no tone controls, and just one volume knob.

The speaker cab is a 1960s Pioneer hi-fi cabinet (solid core plywood, real wood veneer), converted to semi-open back, and the driver is a '70s Cerwin Vega ER124 12" instrument and PA speaker. 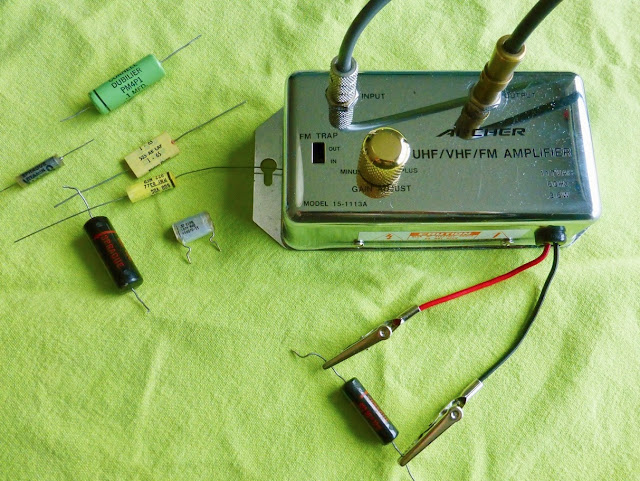 Also, we're only doing straight up audio testing - no capacitance meter measurements, no getting into the pros and cons of various materials, types of construction, manufacturing dates, or any intangible metaphysical or magical tonal properties, no unicorns or faery dust.  Simply put, how does whatever cap being tested interact with a guitar pickup, through an amp - how does it sound?

Prior to each of the separate cap tests, I bypassed the test rig and played straight into the amp to get a baseline tone; after plugging back into the test box, I played the same licks, in the same middle pickup position, with no capacitor in the clips, and then again with a cap in place, with the box's pot turned all the way up.  Finally, the test rig's tone pot was swept and audio impressions noted.  In a couple instances, I completely redid a test, just to make certain I hadn't misheard any tonal change. 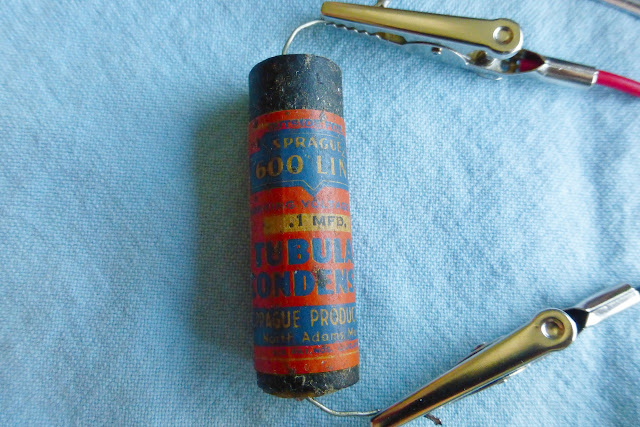 - At maximum clockwise rotation of the knob, a small amount of high end roll-off
- Sweeping the pot towards minimum, no tonal change until approximately 1/2 way
- Smooth taper, no wah effect
- Big jazz tones at full counter clockwise, especially with the neck pickup engaged 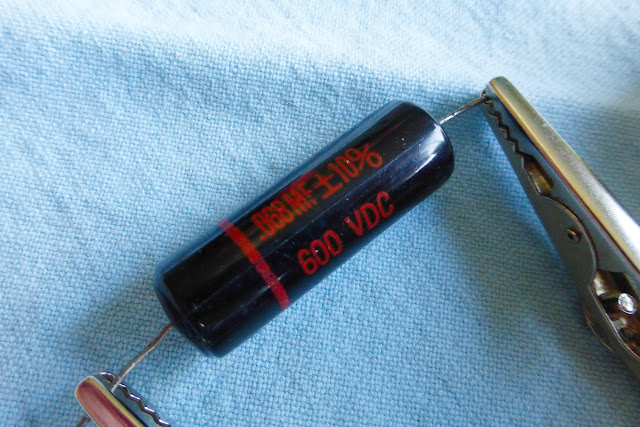 - Very little high roll-off at maximum
- Noticeable roll-off beginning at 3/4 rotation
- Smooth tonal taper, until 1/4 above minimum
- Slight wah effect between minimum and 1/4
- Nice neck pickup jazz tone at minimum
- Works especially well with the bridge pickup, would make a great Esquire tone cap, able to get most any tone between jazz and chicken-pickin' with just the bridge PU 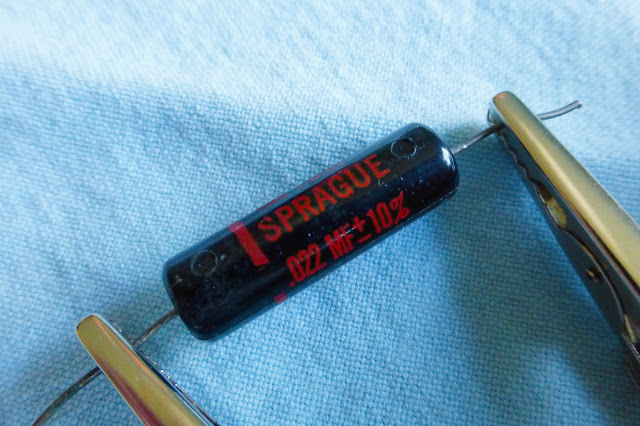 - A small amount of high roll-off at maximum clockwise
- Smooth, even high roll-off transition throughout the entire pot rotation
- No wah effect
- At minimum, no real jazz tone, but has a slight fixed wah sound
- Through most of the pot's rotation, a variety of very usable round, sweet tones 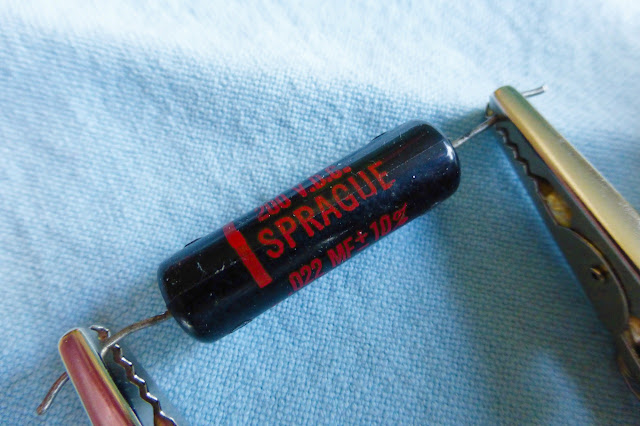 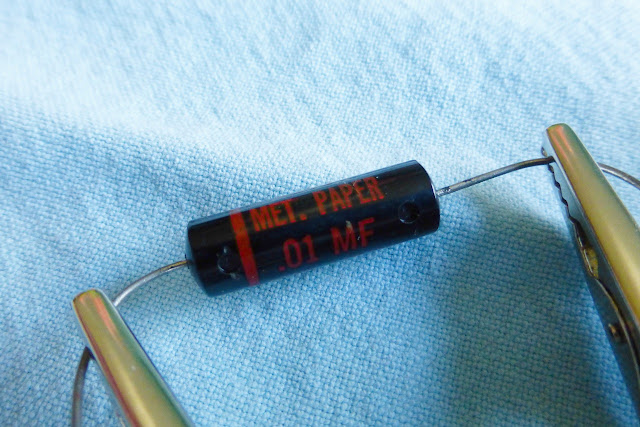 - Noticeable high roll-off at maximum clockwise
- No change in roll-off until 1/2 way down
- From that point until almost minimum, a very slight amount of roll-off
- Almost like a switch, there is suddenly a change in tone: at full counter-clockwise it's a really interesting, hollow sound, very fixed wah-ish
- No swept wah sound, no jazz tones to speak of

All these vintage Sprague tone capacitors are usable in their own ways, and some general observations are that larger values have better application as "Jazz guitar" tone caps, the .01uF might be an interesting effect if placed on a switch, and both the .022uF caps would make very usable all-around guitar tone capacitors.

In particular, the "Black Beauty" Sprague .068uF really shines as a do-it-all tone cap for bridge pickup use, would be great for a single pickup guitar such as an Esquire or Les Paul Junior, and I'm definitely keeping it on hand for my next Telecaster project.

Although logic and electronic theory tells us that a capacitor should have no affect on a guitar's tone if the tone pot is turned all the way up, a listening test such as this very plainly shows that's not the case.  Exactly what the electronic mechanism or conditions within an electric guitar's controls are that cause this to happen are unclear, but anyone who's ever played a guitar with and without tone and volume controls installed, knows that it's not imaginary or theoretical.  Without controls, any electric guitar is louder and brighter, sometimes just a bit, and often noticeably more.

There has been a lot of speculation about whether or not certain capacitors contribute a "wah" like effect, with various self-styled experts denying its existence, at times getting very heated about the subject in some on-line forums.  In a future post, we'll visit a couple of those forum threads, learn just how intense the flaming and name calling can get, and have some laughs at the expense of others.  The fact of the matter is that some caps really do have that tonal capability, or at least some part of it, and it's not a glitch, an artifact, or consequence of being too high and having too much fun.