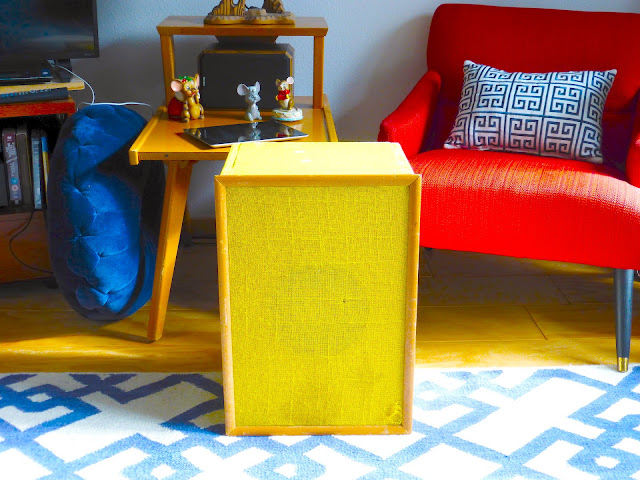 Wednesday was a dental appointment day in neighboring Springfield, and afterwards we stopped by the St Vincent's thrift store on Q St. There were some interesting Asian ceramic pieces in stock that day, and my eye was caught by a pair of brightly painted home made speaker cabinets.

According to the staff, some idiot removed all the screws holding the back panels on, yet still couldn’t get them off, and then grabbed the burlap grill cloth of one cab and ripped it, just to see what the speaker looked like. Seeing a dual “whizzer” cone, he left in a huff, leaving a bunch of screws laying around.No doubt due to their appearance, these cabs were priced low, so I took a gamble since I’ve had good luck in the past with brightly painted home brewed cabs built in a certain era. It was obvious to me what they were: a labor of love by a 1950s or ‘60s do-it-yourselfer home handyman with a limited tool selection: an electric jig saw, drill, screwdriver, caulking gun, pencil and probably a long ruler, were all that was needed to build up these cute yellow cabinets. 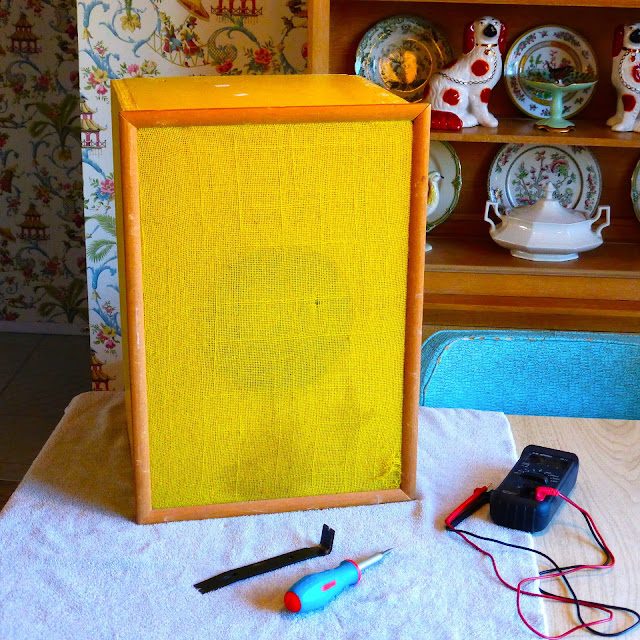 Mr Handyman also had a novel solution for framing the grill material; in spite of having few tools to work with, he was an intelligent and most likely a creative sort of person.

One indication that these speaker cabs were valued by the builder was a blue Allied Van Lines sticker on one, showing he thought enough of them to pay to transport them as part of a whole house move, most likely to another region of the country. 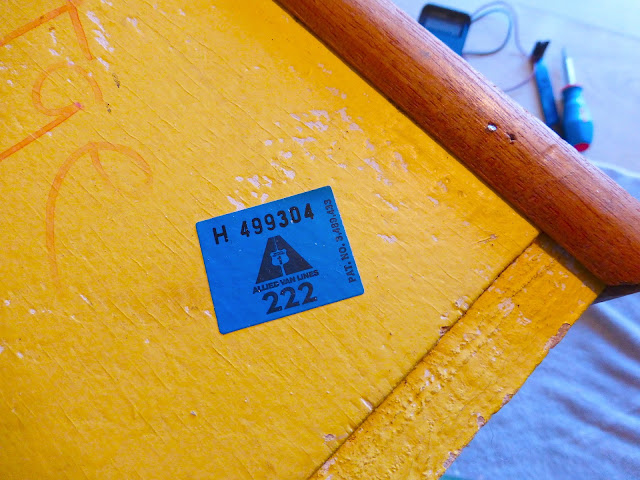 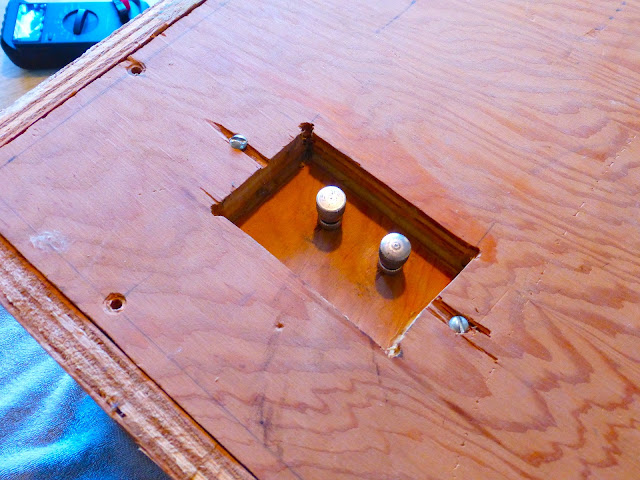 They metered out as okay: 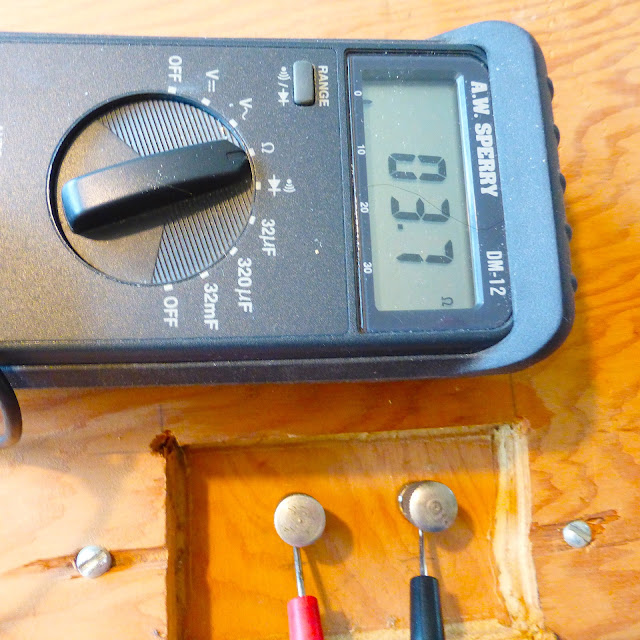 The jerko Vinnie’s customer couldn’t get the backs off because the entire cabinet was caulk sealed. Using a very small pry bar, it came apart easily, with a sharp snap and pop noise as the 60 year old caulking separated.The cleats were screwed in place: 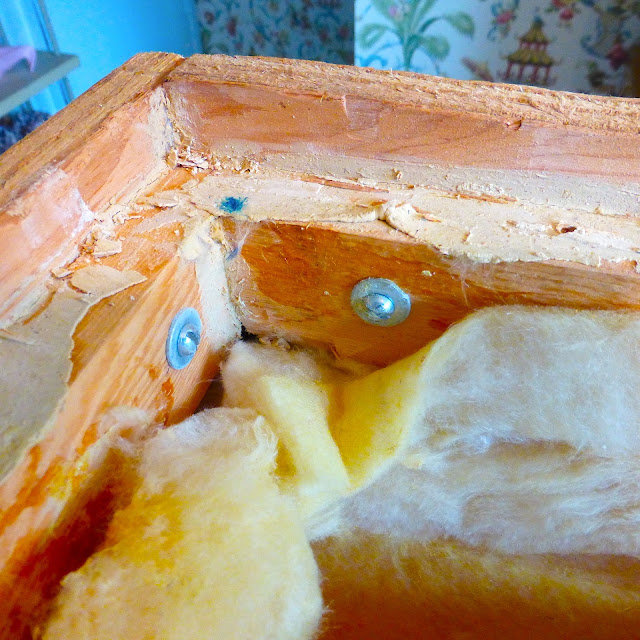 The builder had totally stuffed every cubic inch of the sealed non- ported cabinet with fibreglass batting. Although not done very often anymore, at the time it was sort of a popular concept in the DIY projects as seen in magazines like Popular Mechanics. 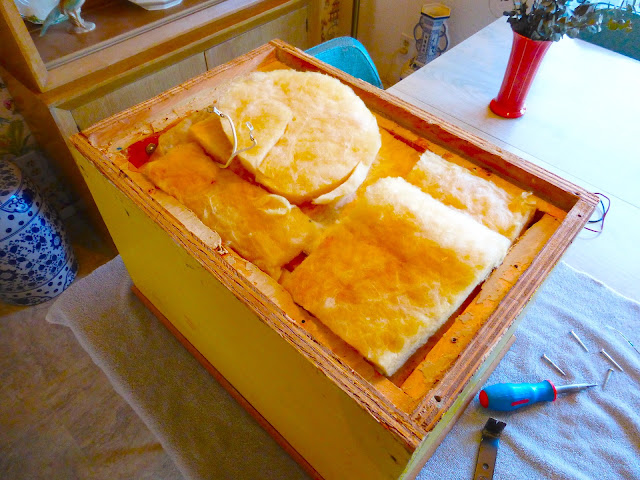 Down at the bottom of all that carcinogenic stew was this: 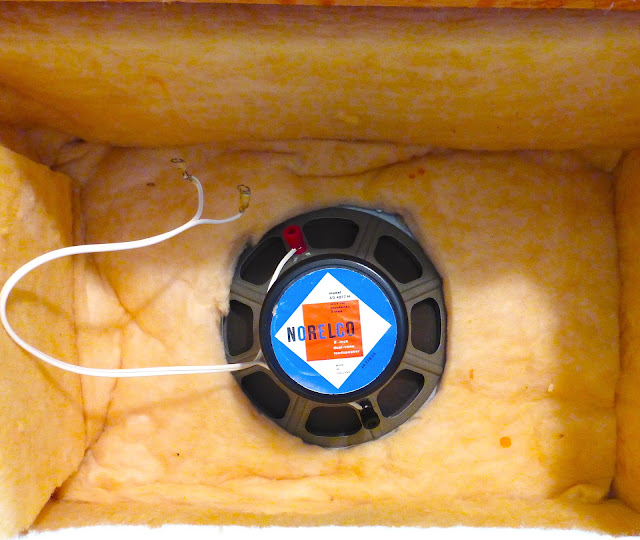 Cool. The magnet cans look amazing, and the 8" (nominal size) speaker drivers themselves are really heavy. 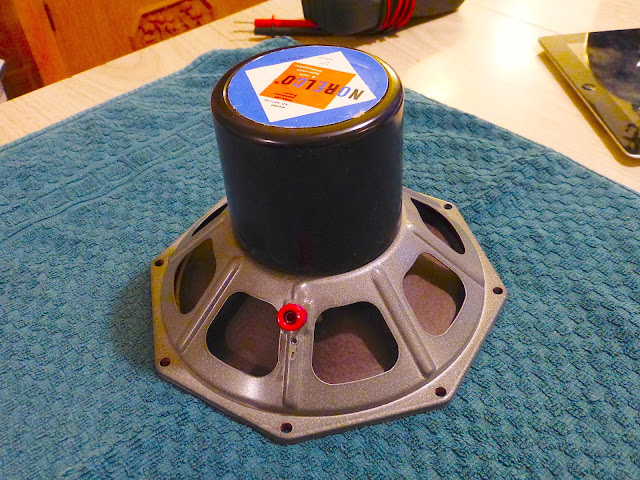 The cones are in overall excellent shape, except for a small bit of damage to one surround, caused by the Gorilla of St Vincent's. Which sounds like the title of some story by Edgar Allen Poe. 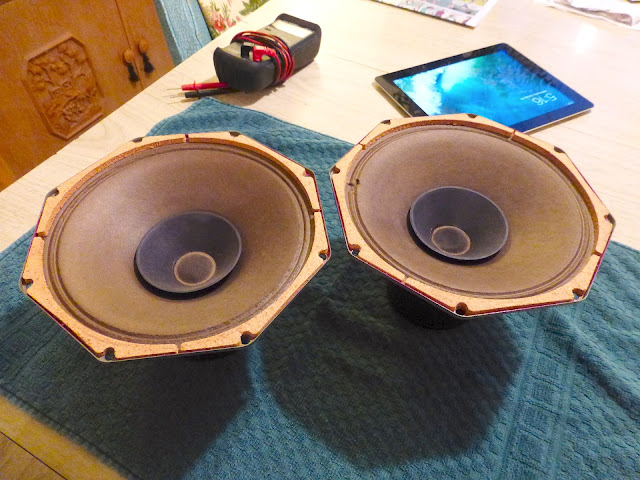 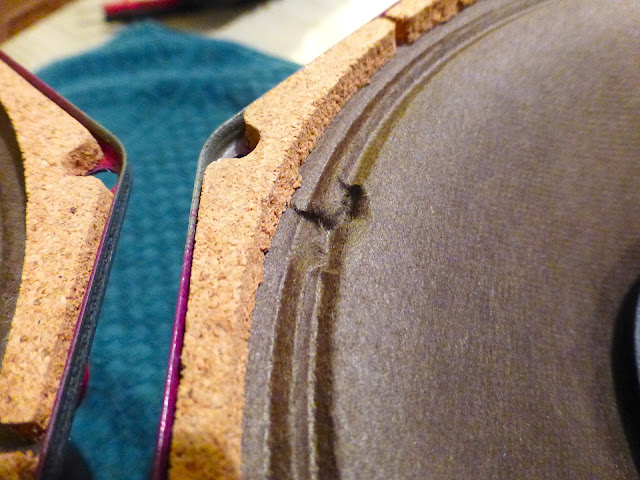 "What a maroon!”, as Bugs Bunny would say. (hint for those not familiar with classic Warner Bros cartoons: Bugs meant to say "moron")Here’s the label: 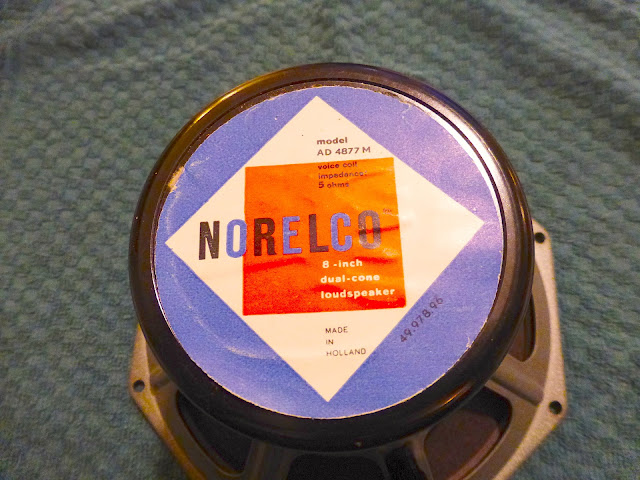 An online pdf of a vintage Norelco hi-fi ad shows these AD 4877M drivers as costing $26 apiece back in the day, which is the equivalent of over $600 for the pair in today’s money - no wonder the builder / owner kept them through a long distance move. 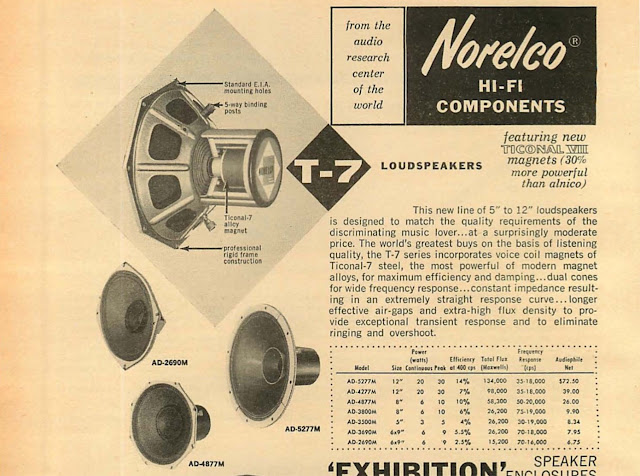 In the pre-internet days I'd seen a magazine article mentioning Norelco and Philips Alnico magnet drivers as being well suited for use with flat panel "open baffle" speaker design. Checking online today, it’s hard to say if that was so - one of many things gone down the internet memory hole. Well, let's see what these Norelco speakers sound like. I hooked up the cabs, one as-is sealed and chock full o’ fibreglass, and the other with no batting and the back removed to approximate an open baffle audio experience, and had a listen to some pieces on the local classical station, KWAX, and selected tracks from a few of my favorite test CDs:

Also auditioned were a rare String Quartet in E minor by Giuseppe Verdi (Joe Green!), JS Bach's French Suites played by Andras Schiff, Samuel Barber's Symphony No 1, and one of my all time faves, "Graceful Ghost Rag" by William Bolcom. 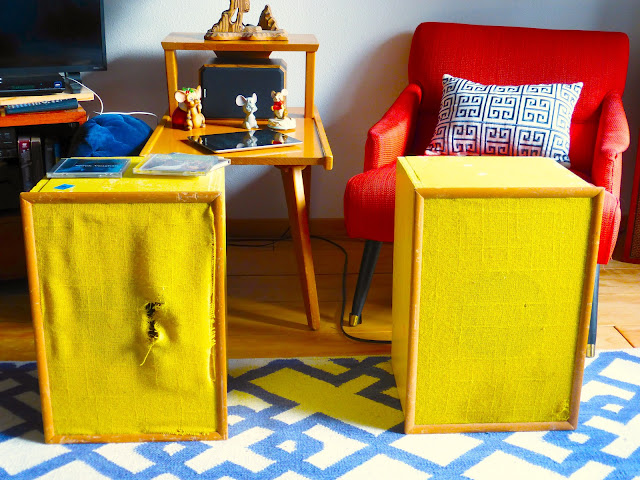 Never mind the slightly comical looking cabinets - these are nothing less than the greatest sounding single driver speakers I’ve ever heard, and very efficient - at a guess I’d say at least 25% higher efficiency than the Wolverine 8” loaded (plus 12” woofer) Electro-Voice Leyton speakers I have in the living room. Truly astounding detail - I could hear every nuance of brushes caressing the snare skins on vintage jazz recordings, Sarah Vaughan at conversational volume level sounded like she was right there in the room, the separation of moving harmony lines in the Verdi string quartet was incredibly lifelike, and Carl Wilson's vocal on the Beach Boys Pet Sounds album cut “God Only Knows” was sweeter and more angelic than I’ve ever heard it.Since Pet Sounds is a mono mix I panned between the two cabs to hear differences in the cabinet configuration, and found the open back cab to be a bit more efficient (louder), and the closed one to have a slightly better low end, but not by very much. 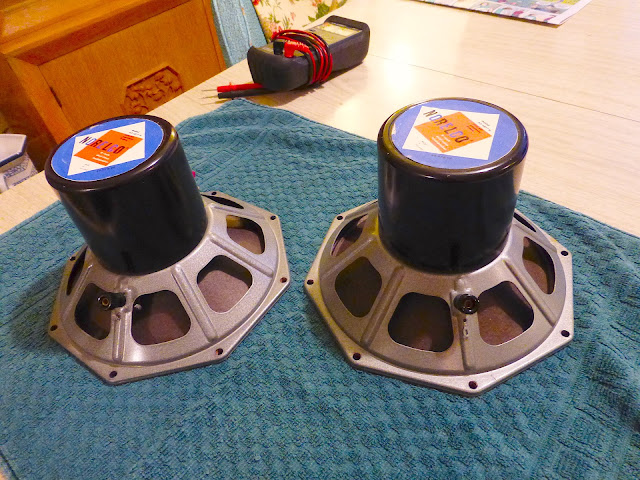 Uh oh, I feel another project coming on. Maybe build a pair of solid pine open back cabinets the same size as these yellow things (external dimensions 13.5" x 19" x 12", 1/2" plywood baffle). Or maybe just keep those funky 1950s labor-of-love cabs just the way they are, enjoy the wonderful sound, and who cares what they look like?