My Messy Corner Of The Yard 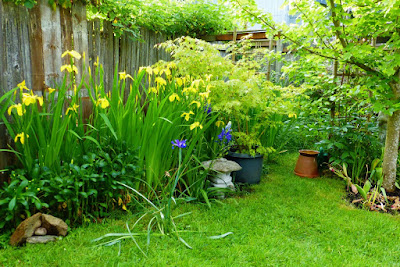 Welcome to my corner of the yard.  Yes, it's a sloppy mess, and most of it is an ongoing experiment in what might possibly grow in a small plot that formerly was almost barren: full of dog-dug holes and mostly bare dirt except for a few scattered clumps of thirsty, unhappy bunch-grass.

Most of the decaying and slowly disintegrating cedar fence wasn't visible, having been overgrown with blackberry brambles, which were at least a cheerful shade of green most of the year, and provided lots of really tasty berries.

Unfortunately, over time the brambles turned into an impenetrable jungle of dead brown stalks, full of giant vicious deadly thorns, and bearing little fruit.  We put up with the unsightly bramble for awhile, due to the shelter it provided for the many migratory birds that would stop over in the spring and fall; wild honeybees also had their hives within the blackberry thicket, and it was a secluded location for a dragonfly to rest as its wings dried after emerging from a chrysalis.

Finally, though, it was time for something new.  After a couple weekends of bloody combat - did I mention the giant deadly thorns? - the bramble was gone, leaving behind an ugly old fence and a lot of totally bare ground.  Through whatever mechanism they have, blackberries are able to out-compete most all other plants, and the earth underneath them is sterile, with nothing else growing, not even one stalk of grass.  A blank canvas for, whatever.  Winter was coming, which here in Western Oregon means a freaking ton of rain, and rather than have a big muddy mess, I spread a layer of bark mulch out on the bare area, and let it sit until the following spring.

I should say something here about the "lawn" in the back yard.  Even though it was mostly bare dirt to begin with, it does rain a lot here, and eventually various things started growing - five or six varieties of grass, two of clover, and much more besides.  With only periodic cutting back, some additional watering, and letting the grass naturally go to seed before mowing, after six years we had a "salad mix" lawn, soft enough to walk barefoot in.

By springtime, a few new seedlings were popping up through the bark mulch where the bramble used to be, and it was time to plant.  A neighbor had a large plot of yellow iris, and she generously let me dig up a few, and I transplanted about a dozen clumps of that bulby stuff alongside the fence.  There were also two big white daisies that needed moving out of the sweet-pea patch in another part of our yard, since it grows really fast and tends to take over whatever space it's in.  Divided up into eight smaller bunches, I put the daisies randomly around the clumps of iris, along with some artichokes, native wild camas, and blue iris, and let them all fight it out between themselves.

For the first year, everyone got along okay, but now it's apparent that artichokes can't compete with irises and daisies, and eventually there won't be anything left here but the ultimate winners at plant warfare, the yellow irises.  Amazingly, these irises can even out-compete the blackberries.  The blue iris and camas don't do well either, and this fall, after the daisies are done blooming, I'll move things around, again. 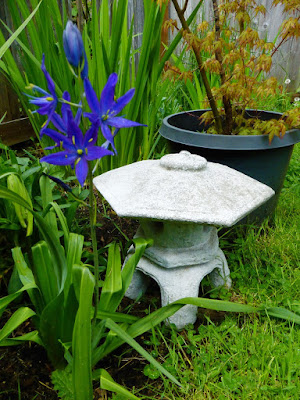 The tree on the right side of the picture at the very top of this post is an Autumn Blaze Maple and seven years ago it was just a 5 1/2 foot potted plant; now it's over 20 feet tall, and still growing fast.  A small Japanese Maple lives in the pot that the large maple used to be in; it was just a small seedling four years ago, and maybe next year it will be ready to put in the ground somewhere. 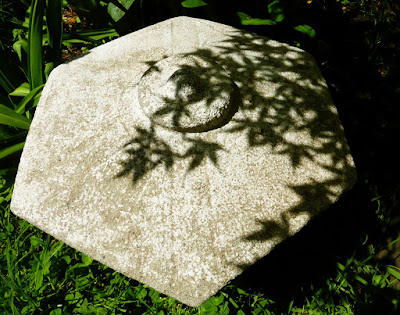 Now, it's summer again, and there's a whole lot of new blackberries coming over the fence from the neighbor's, and soon there will be sweet berries galore hanging down into our yard.  And since they're rooted next door, all the pies and cobblers and dishes of ice cream with berries on top will come with no hassle having to maintain the bramble on this side.  And that, is a sweet deal.

And just so you know, blackberries are considered a noxious invasive weed here in Oregon, and in this town they're technically illegal to have growing in your yard, although I don't think anyone gets arrested for having them, unlike, let's say, something like smoke-weed.

Recently, I've moved the blue iris, and let the grass take over their space, and a couple of lawn mowings have made this area look a bit more civilized, but not much.  It's still a disorderly green mess, and it's not for public show.  On balmy summer evenings it's a pleasant place to sit in the old cushioned double swing seat and read a good book until the light fades, listening to amorous crickets, while the swallows overhead, swifting back and forth in pursuit of their insect suppers, will all go to their sleeping spots, their places gradually taken in the sky by small bats that have similar culinary tastes.  Sometimes I wish we had fireflies here, but you can't have everything.

Some of the photos above were taken by June of the blog Under The Plum Blossom Tree, with either a Lumix ZS-25 or a Lumix TZ-3.  She also made the very tasty berry pie.  Click or tap on any picture to see a larger image.
Posted by James Aoyama on 12:54:00 PM
Newer Post Older Post Home