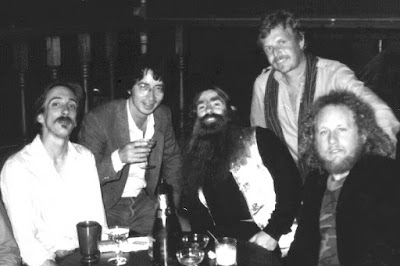 The photo above is a scan of a pre-digital era film print. I think I know who took this picture, but not really sure; but I do know who these guys are, what they're doing, and where they're doing it. From left to right:

• Tom "T-Bone Thomas" Jerkins. Chicago blues man extraordinaire - a great singer, blues harp player, and effortlessly fluid guitarist with his own unique style. T-Bone lived what he loved, talked the talk, and played all the right notes. Possibly the single most masterful player I've ever had the honor of knowing and working with.

• Your humble servant, the author of this blog. During the time when this photo was taken, I played a bit of guitar, sang a few songs, and wrecked some cars.

• Fabrice "Fab" Dolegowski. Genius photographer, dedicated family man and father, a solid, sensitive, and reliable bassist and mandolin player, babe magnet, and overall nice guy. No party was complete without Fab. A true old-world style gentleman, the only person I ever knew who was born in Paris and then found his way to Colorado.

• Clark Hardin. Second generation Bakersfield musician, a top notch player from a place where all the players are born talented, and only get better as they grow up. A drummer who never played a beat out of place, a remarkable guitarist and naturally gifted singer, especially of vocal harmony. It was always a pleasure to stack vocals with Clark, since his parts were always right on.

If memory serves, this photo was taken at the Gaslight Pub in Estes Park, Colorado, some time in 1983, maybe February or March, and might have been snapped by Jeanne "C.B." Bacon, a talented singer and instrumentalist herself. It's likely at a musical gig, jam or party, and everyone here had some part in the festivities and fun, since that's what we did back then - had fun with music.

Looking back, I feel blessed, and lucky too, to have been part of a rich and varied musical scene in Colorado alongside such an array of talent. And it wasn't just these players - there were many many other equally brilliant guys, and ladies too, who anyone would have been proud to have shared a stage, studio, or jam room with. To any of them who may be reading this, let me say: thank you, for all those good times.

To see a larger, higher def image of the above photo, click or tap on it.
Posted by James Aoyama on 9:29:00 PM
Newer Post Older Post Home