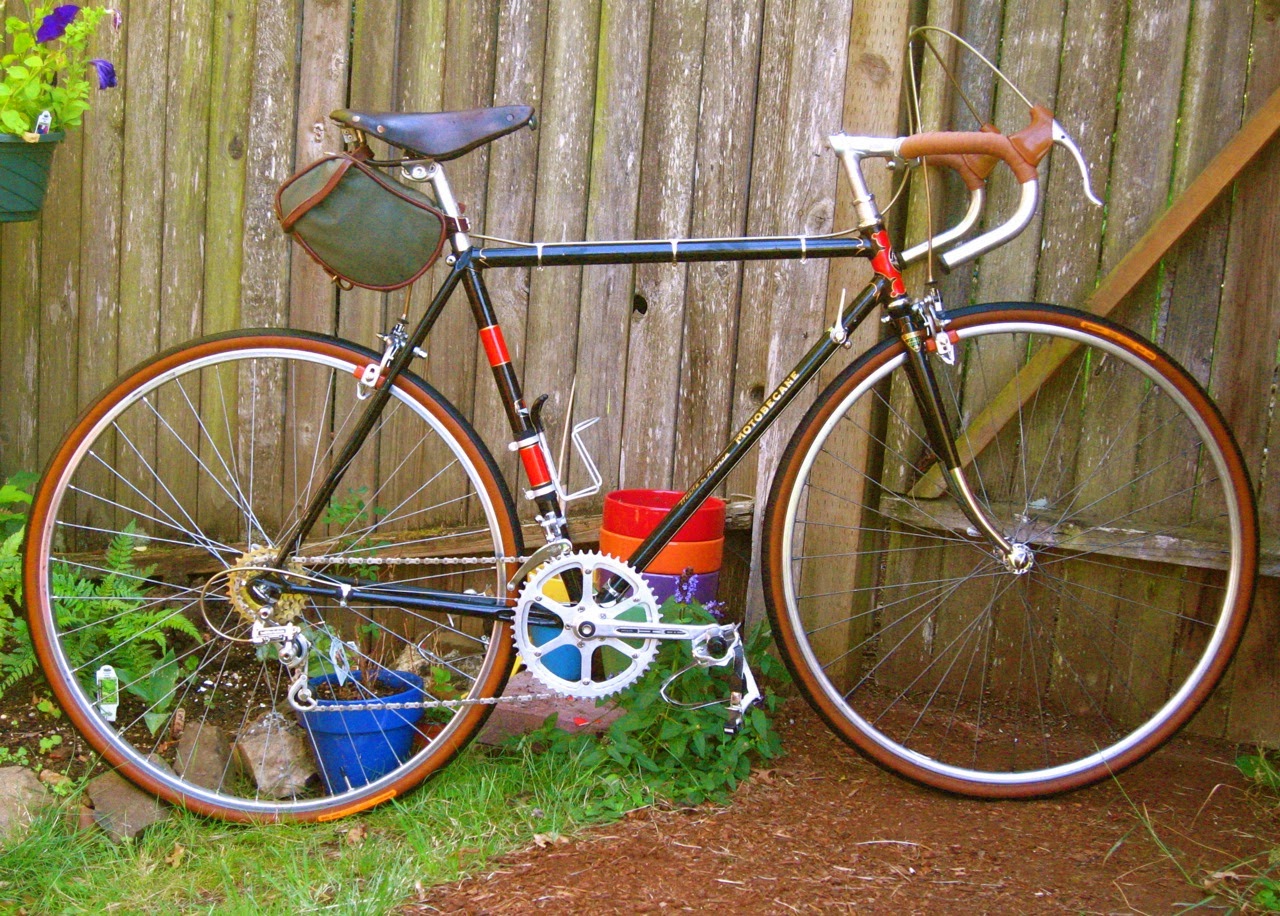 Here's a retro look back into another era, when steel frames were brazed up by hand, when there were many smaller makers of fine bicycle parts throughout Europe and Japan, when there were small shops everywhere that would build a cycle for you from the frame up, with your choice of components - all before Shimano, the Walmart of the bike biz, took over the world.

This classic style bike was built up from a Motobecane Grand Record frame, made in France, vintage early 1970s.  The hand-brazed Grand Record frames were made with thin walled Reynolds 531 (say "five three one", not five-thirty-one) tubing; when unbuilt, this bare frame is extremely lightweight and rings nicely when tapped with a screwdriver handle or pencil.  The main frame has Campagnolo rear dropouts, and clean construction with no braze-on attachments - no shifter bosses; no top tube, downtube or chainstay cable guides; and no water bottle mounts to mar the lines.

As well, there is some outrageous and crazy-beautiful head tube lug work: 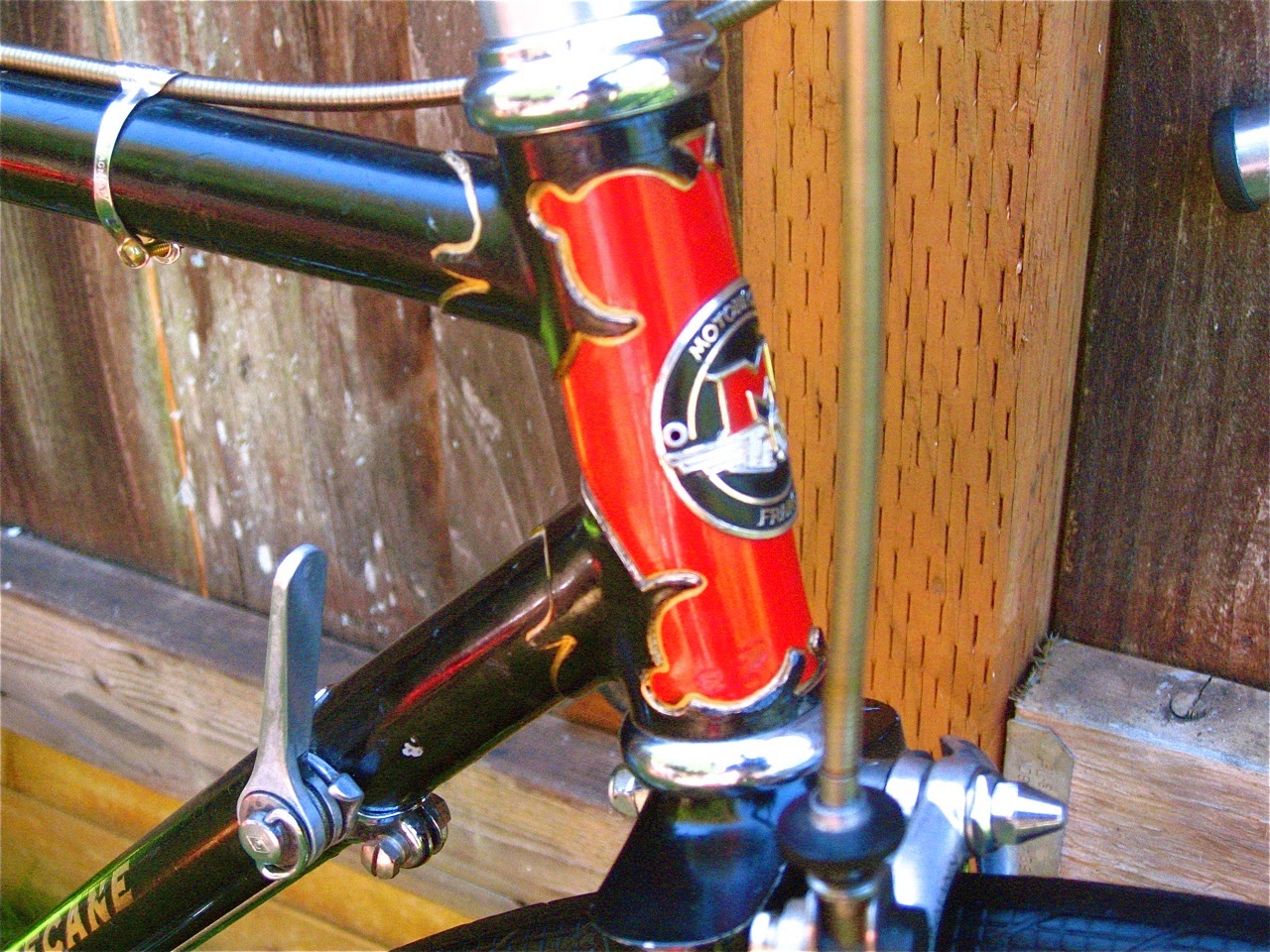 According to my brother Jonsan, who really knows about these things, the head tube "lugs are Nervex Professional, or close copies of Nervex.  Nervex Professional lugs were found on many high end bikes of the day, including Schwinn Paramount, Raleigh International, and Peugeot PX-10, coincidentally all of which used Reynolds 531 tubing".

The original fork had gotten fubared somehow long before I bought the frame; the replacement Reynolds 531 fork is a high quality Tange, made in Japan, with chrome fork tips and Suntour dropouts.  When I purchased this fork at Paul's Bike Shop on Alder St. in Eugene, it and the Campagnolo headset were personally fitted to the frame by Paul Nicholson, who also assembled and aligned the Phil Wood bottom bracket and TA cranks.  As many already know, when Paul himself comes out to the shop area and offers to work on your bike, the fee is nominal and two or three stories are also included at no extra charge.

Since the original fork had gotten messed up, I asked Louie at Blue Heron Bikes here in town to check the main frame alignment, and he cold set the head tube and chainstays; Louie happens to be the most knowledgeable and skilled bike tech in the known universe.  I then built this up as a daily driver, with all high quality European and Japanese components, mostly good-to-excellent condition used, but some NOS (New Old Stock), as follows:

In addition to the above, all bearings, even down to the pedals, were completely torn down, cleaned, packed and adjusted; and the entire brakeset, including the levers, was disassembled, cleaned and relubed.  Plus a professionally done wheel truing, new tires (which are themselves classic-style older stock), new tubes, new chain, all new cables, new brake pads, new ball bearings as needed, etc, etc, etc...  It was a lot of work, but it was worth it - this classic old bicycle is solid, responsive, and corners fantastically.

And finally, that's a prototype of one of my own under saddle bags, a modification of an old French design and made right here in Eugene, USA, and one of these days I'll probably offer them for sale.  If you're interested, you can email me here.

Here's some more pictures (click or tap on any photo for larger, higher def images): 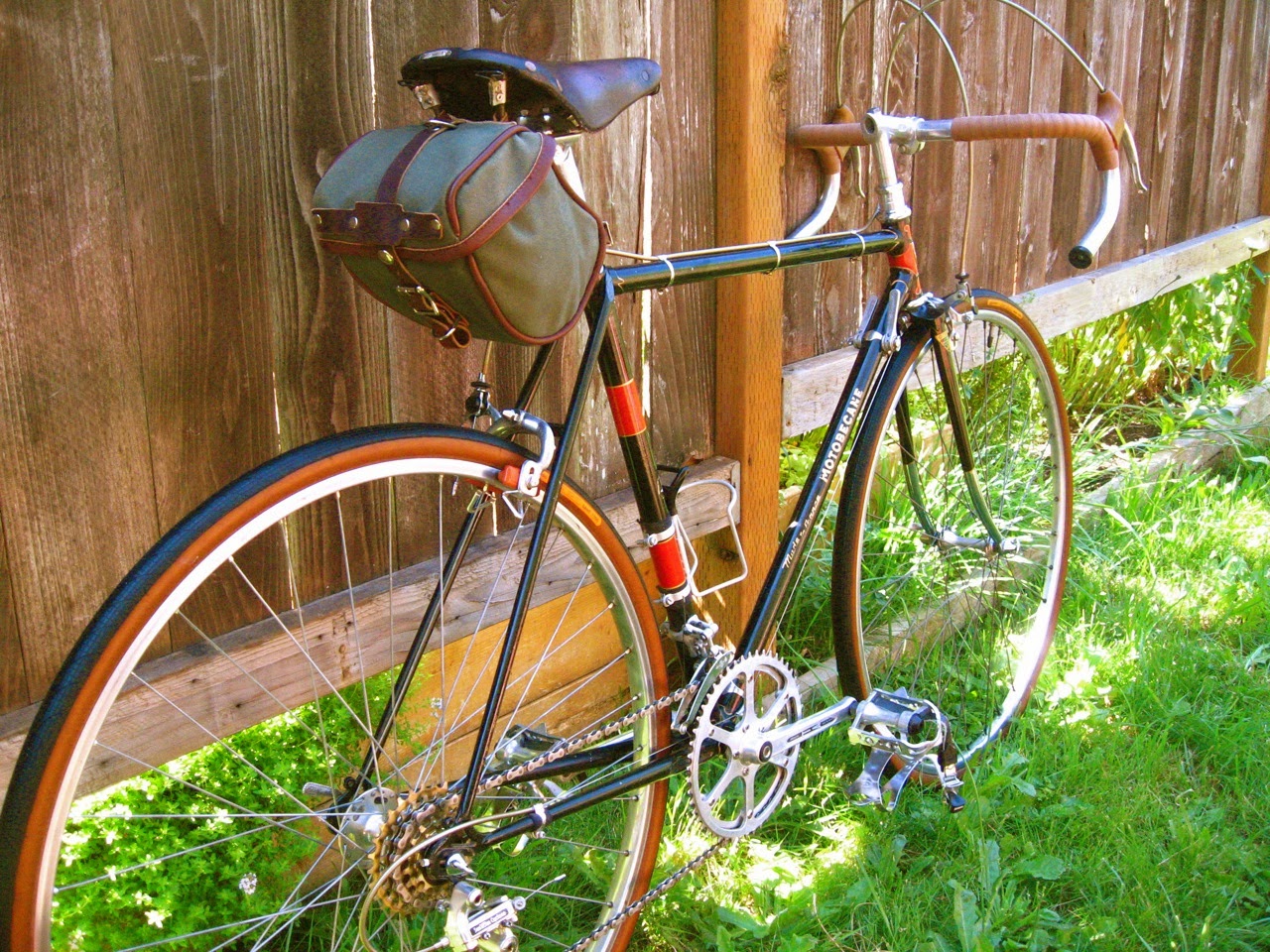 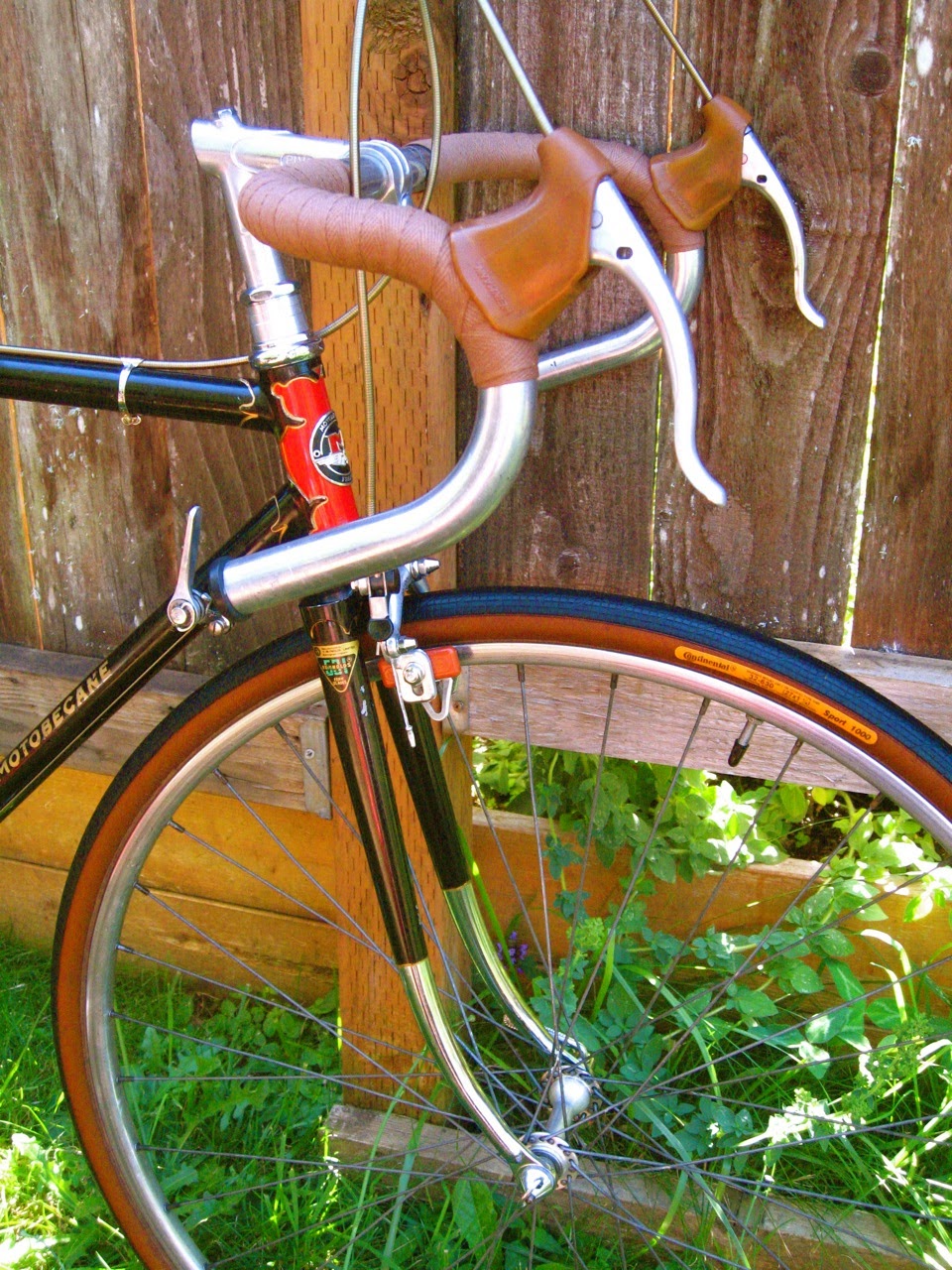 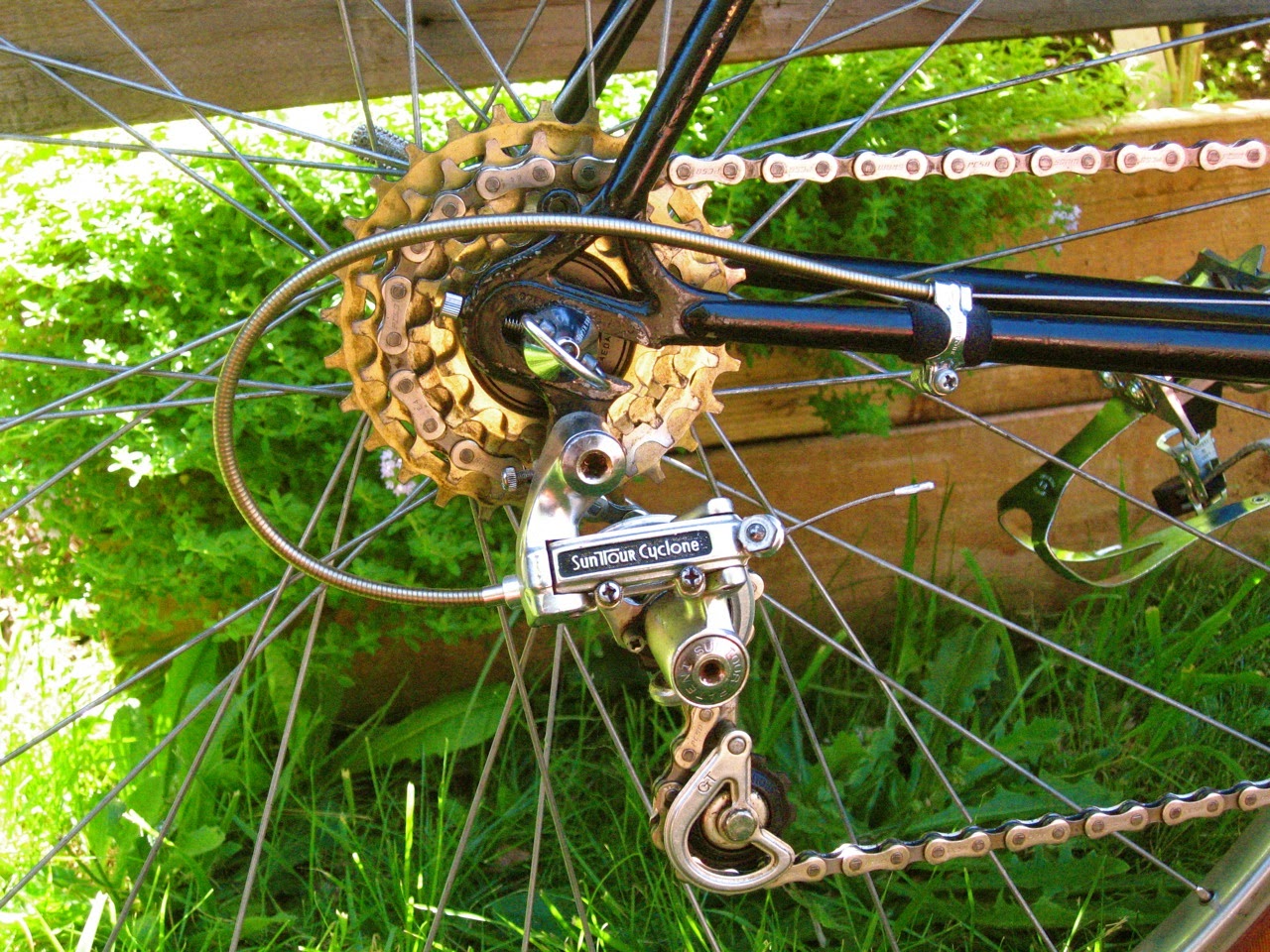 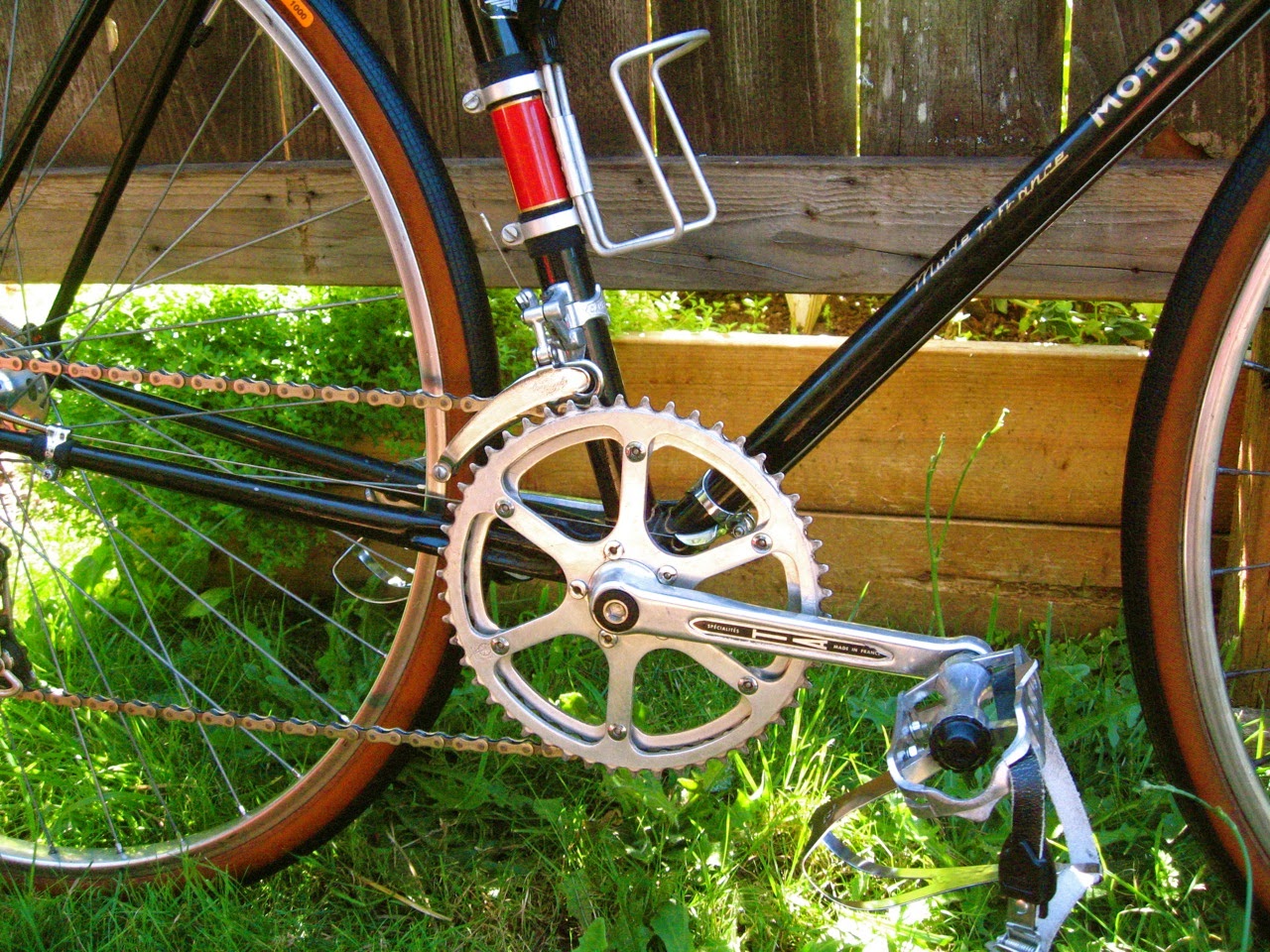 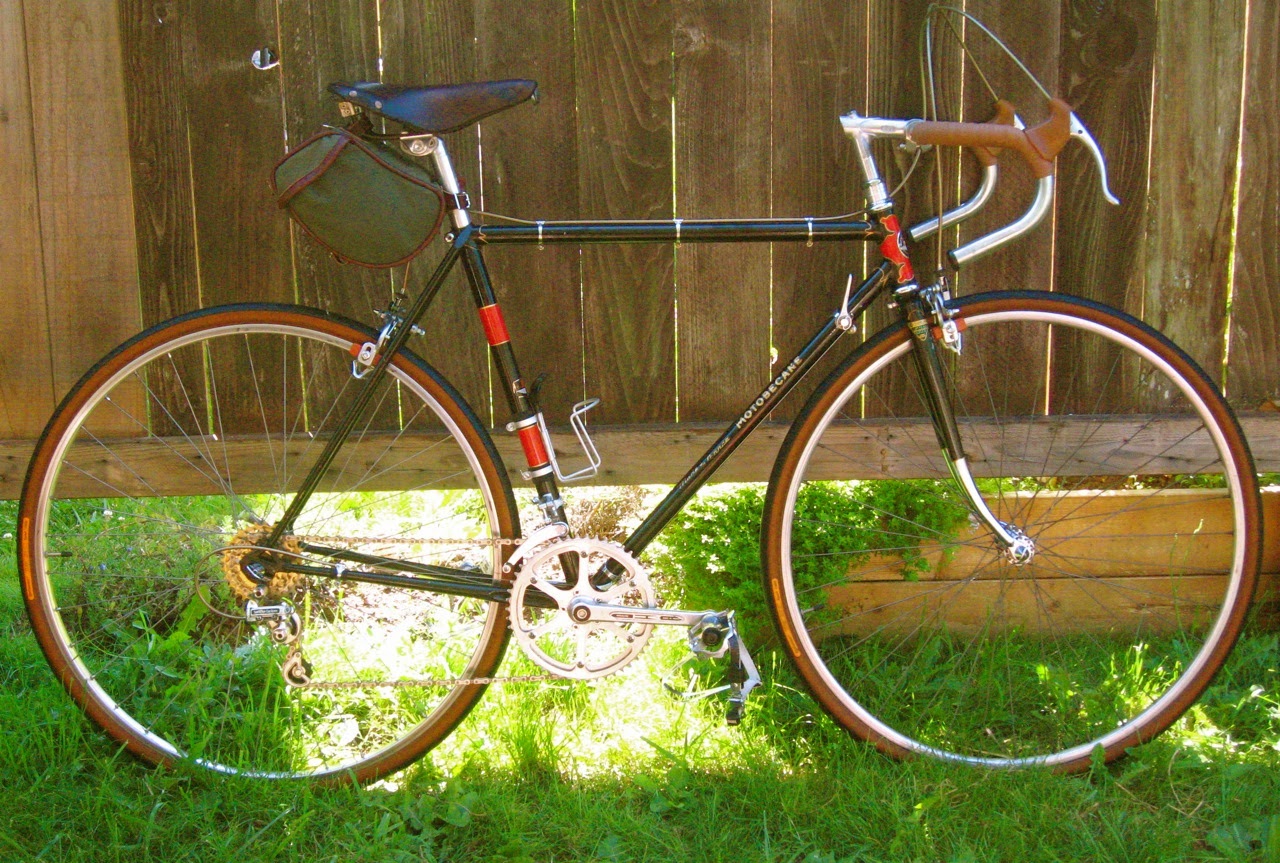