The totally astounding Swingle Singers, from their 1963 album Jazz Sébastien Bach (also known as Back To Bach in the US), performing Prelude and Fugue No. 1 in C major, part of Johann Sebastian Bach's Well Tempered Clavier Book 1, BWV 846.

The member credits listed on online music download sites, as well as on web videos of the Swingle Singers, are often not quite correct.  The actual credits for this recording, along with identification of the members in the photo, are:

Until the original group disbanded in 1973, the member lineup changed somewhat.  Some of the other Swingle Singers during that time were:

Ward Swingle (1927 - 2015) led what might be considered a storybook life: a kid from Mobile, Alabama moves to Paris, gets involved in the musical scene there, creates a whole new way of crafting vocal music, founds a singing group that is still rocking out to this day, and gathers multiple Grammies and numerous other awards along the way.  And with such a great last name - Swingle - it was meant to be.

The Swingle Singers had a lot of devoted listeners during the time the original group was together, and for good reason - their music was, and remains, deep, intelligent, harmonically complex, and it rocks and it swings.  When I was a kid, I was a big fan of The Swingles, and I guess you could say I still am.

Rémi C.'s fun and informative blog Dans l'ombre des studios has interviews with, and articles about, former members of the first, Paris based edition of the Swingle Singers, as well as lots of other cool stuff, such as vintage photos, and even a previously unreleased studio track.  The site is en Français, and as usual, hilarity results when a browser's translate function is used.

Here's one of the photos from that blog: 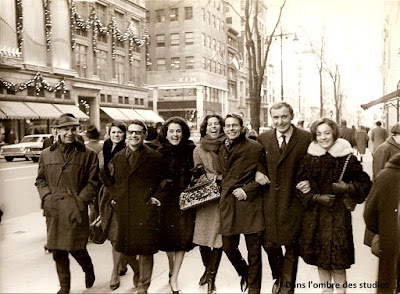 A picture of the group as they gigged around the world back in the 1960s: 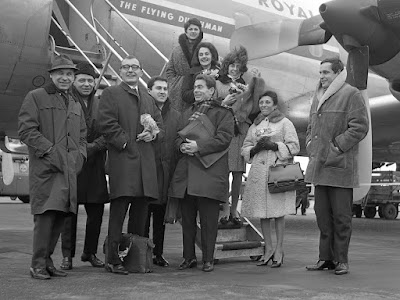 Something else from the original Swingle Singers: the first (Vivace) movement of the Concerto for Two Violins, Strings and Continuo in D minor, BWV 1043.  Not only does it swing from beginning to end, but their vocal performance, rather than the usually heard orchestral instrumentation,  really accentuates Bach's complex multi-layered polyphony:


And a live performance from 1969: The Swingles doing Bach's Partita No. 2 Sinfonia.  After a slow, meditative first part, the tempo quickens, and they really get grooving: a great mix of Bach's genius music and the swinging power of Jazz Vocalese à la Swingle.