A Honeybee In Crocus 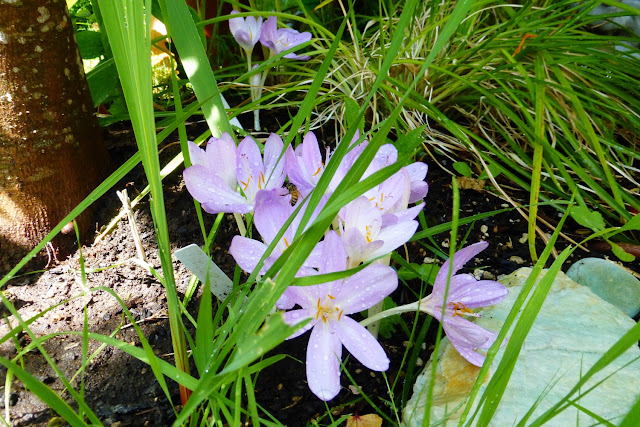 Poking around the back yard early this morning, I realized I hadn't noticed that some late summer crocus had popped up, as is their habit - not here one day, but suddenly, here they are. Then again, I've been gone for a few days. We never know how many we'll see in any given year; they don't seem to spread much, but that may be due to our crummy volcanic clay soil, which we don't amend much. Lazy gardeners.

Took a picture, just to capture those lovely shining dew drops on the blooms. When I was reviewing the shot, I noticed a honey bee atop one of the petals. It was early enough that the sun had barely hit this part of the garden, and it was still cool under the shade of the young maple. So, like me, the bee was just getting started, moving slowly.

Put the camera in macro mode, moved up closer to the crocus, and snapped another shot. I don't know why I like honey bee faces so much - they're just another flying bug, but something about them appeals to me. Fly faces seen up close, on the other hand, are terrifying; maybe I've seen too many horror movies. Bees (but not wasps or hornets), in comparison, seem almost friendly. Bee-nign, maybe. 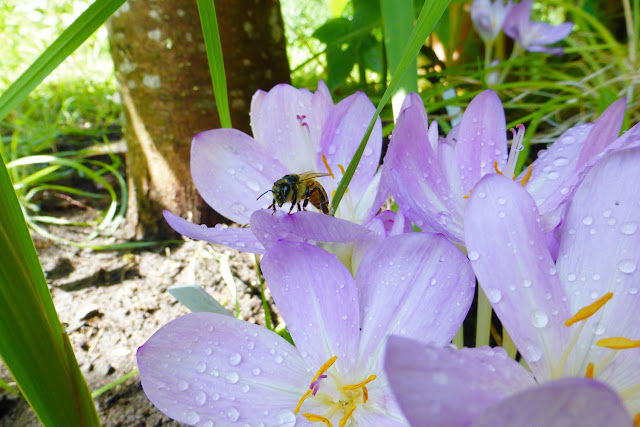