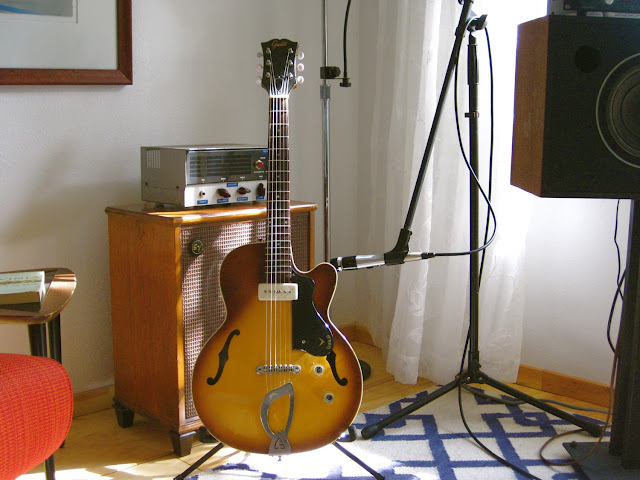 This is a Guild M-65 3/4, made in 1962 in Hoboken, New Jersey. The "3/4" indicates that its 23.0" scale length is shorter than the usual Guild M-65 model, which had a 24.75" scale. At first glance, this hollow body guitar appears to be a normal sized jazz box, but it's actually a very petite little thing. The body is only barely larger than that of a Gibson Les Paul, and if it had the longer 24.75" neck, it would look very Les Paulish, only hollow instead of solid wood.

At 23.0", the scale length is an inch shorter than a Fender Mustang or Jaguar's 24.0", and it's a gas to play, really effortless chordal comping, arpeggios, and single note stuff. The original pickup was made by Franz (or Fransch?) in Queens, NY, and appears superficially similar to a Gibson P90, but a closer look shows that it's not. A perfect tonal match for the beautifully finished laminate arch top body, this pickup has its own unique sound, sharper and clearer than the usual mellower tone coming out of most F-hole bodied electrics. In the middle of a dense jam situation, this Guild really holds its own, and its well defined tone cuts through the mix very well.

It has what looks like a regular Tune-a-matic bridge. Whether that was stock with this guitar, or is an add on, is unknown, but it was already on it when this M-65 was acquired by its present owner in the mid 1980s. The short string length makes it a bit hard to find a string set with just the right tension. After a few tries, I settled on gauges similar to an acoustic light gauge set, only in a nickel wound rather than bronze/brass, and with an unwound third: .012, .015, .019, .032, .042, .052. I used to have a 22.5" scale Fender Duo-Sonic, and those were the gauges of strings I used on the Duo, but I'd forgotten that, until I was reminded.

I should take more photos of this sweet guitar, but - it's not mine. On loan from a dear close friend, it's currently lending some nice tones to a recording project I'm working on. As much as I like it, I know I'm going to have to give it back eventually; however, the more I play this Guild, the more I think I'll just keep it. Just kidding! But, as the title of this post says, it's my new favorite old guitar.