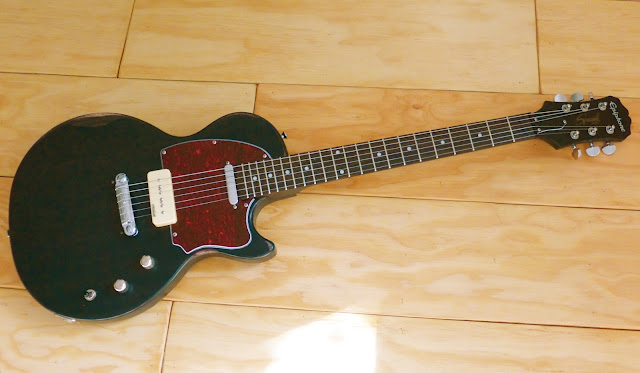 This is the tale of an ugly little Epiphone Les Paul Special that no one wanted, and how it got a style makeover. And now, even though it's still ugly, it gets a lot of attention everywhere it goes, appreciated not only for its one of a kind uniqueness, but also for its lovely voice. And really, that's all any one of us could ever hope for in life.

Every story has a beginning, and this one starts with an ugly little speaker cabinet that no one wanted, until it found a loving home: 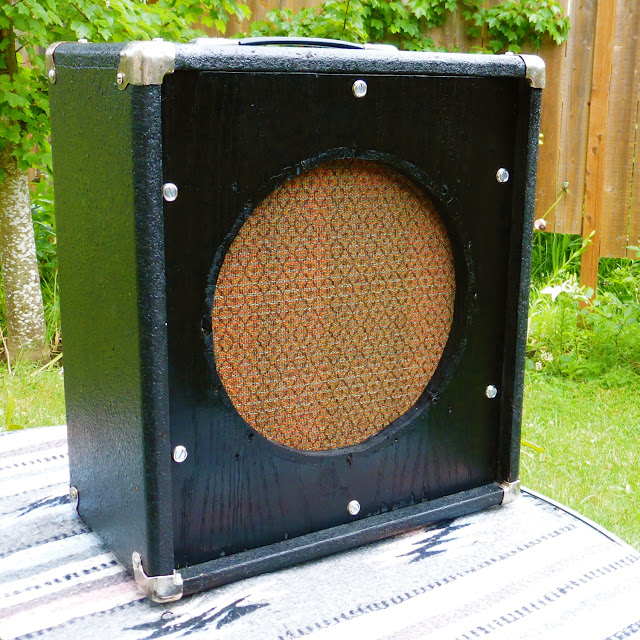 Long ago, possibly in a faraway land, this cab started life as a solid state guitar amplifier, and there's no way to know what brand or model it may have been. At some point the amp circuit died, and its owner removed the amp chassis and tossed that into a dumpster. Then, he put in a really unattractive hand sawn plywood baffle that filled the entire front of the cab. It was even uglier than it is now, with an unpainted baffle, no grill cloth, and a chunk of MDF hammered into the back opening and glued crudely into place.

So far, this a really sad tale.

When my friend David from Massachusetts was rebuilding a late '60s Bassman head, he needed a speaker cab to test out his repairs and circuit mods as he went along, and found this ugly particle board cabinet on craigslist, really cheap. Besides its unsightliness, one reason it was cheap was that it didn't come with a speaker. I contributed an old Cerwin Vega 12", and that combination got David through his amp restoration project. Later he put the Bassman chassis into a beautiful JD Newell 2x10 combo cab, but that's another story.

Over the years, this ugly cabinet has had numerous 12" drivers in it, for auditioning various speakers, and as an extension cab for testing other tube amp mods and repairs, and it became known as The Test Cab. Which sounds better than The Ugly Cabinet. The Test Cab spent time both here and at David's shop, and when he moved back to Mass, I inherited it. Feeling sorry for the ugly little cab, I painted the baffle, put shiny new screws on it, took a hammer and knocked out the awful back panel, and cobbled up an input jack gizmo out of a Les Paul jack plate.

Out of all the 12" speakers that have been in The Test Cab, one of the best tonal combinations has been with an ugly old vintage speaker that no one wanted: 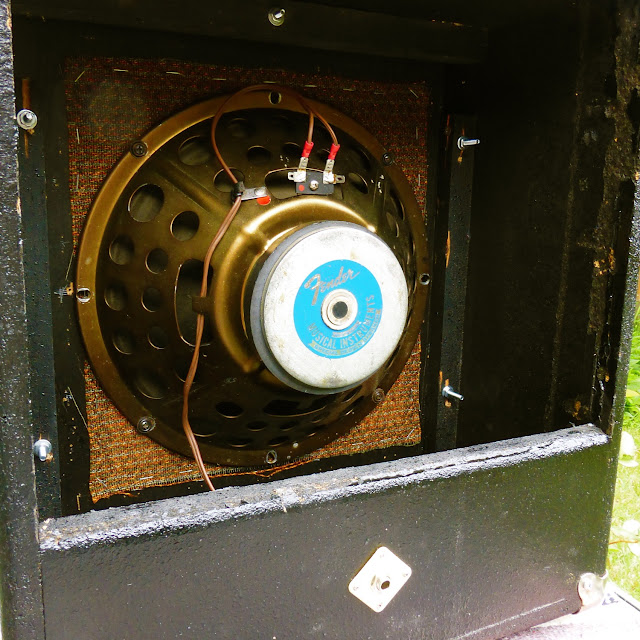 That's a Fender labeled CTS, original equipment in an early 1970s Deluxe Reverb Amp. I had replaced it with a late '60s Jensen C12N; a friend in Colorado now has that amp, but doesn't want the original CTS back at all - he's a guitar player, not a vintage hound or collector. I'm not a collector either, but old stuff seems to collect me, and I always have too many 12" speakers. I've tried selling that '70s CTS a few times - Reverb, eBay, craigslist, and nobody ever wants it. A real 40+ year old vintage Fender speaker that still works well and sounds great, for a low price, and no one wanted it, because it's ugly.

That is, until a couple months ago. I put the CTS up for sale again on local craigslist as a combo deal with The Test Cab, since there's now more than one empty cabinet in my shop for testing. Only $35.00, and no bites for over two weeks - until someone answered the ad, and asked if I was up for a trade, and sent this picture: 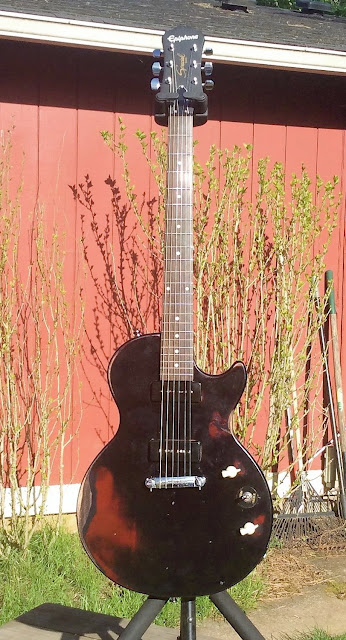 Hey, I've seen that Epiphone Les Paul Special II before, and I know that out-building, which is a cozy music studio in a little town a few miles west of here. I had some clue who had answered the ad, and I replied: John, you don't have to trade that Epiphone, you can just have that speaker cab, I'm happy it's going to a good home.

But John loves to barter and trade for stuff, almost as much as he likes making music and building unique and interesting guitars. He wanted that ugly old cab with the unloved speaker, and wouldn't accept them as a gift. So I did end up with that funky Les Paul, but I took the pickups, tuners, and most of the hardware bits off and gave them back to John, keeping just the control pots and switch.

Although these inexpensive low-end Epiphones are made of some strange space-age faux wood, they're really okay, except for the low-quality tuners, bridge, and pickups. This particular guitar had a neck I really liked, with a chunky, solid feeling '50s profile, and no fret wear at all. Almost unplayed, and pretty much like new, except for the badly done "relic" job on the body: 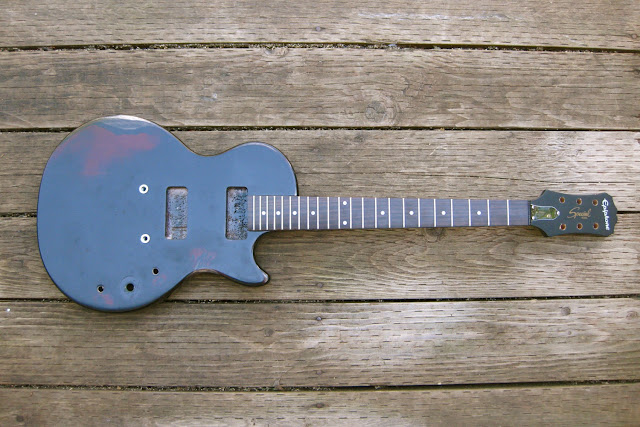 I'm not a fan of the whole relic thing in general - you know, if you want a beat up looking guitar, get a new or used one and play the shit out of it, and in the process become a better guitar player too. But I'm also a believer that whatever you own, you have the right to mess it up. And mess it up is what the original (or second?) owner did, to this poor Epi LP Special.

First, he (or she, but probably a he) sprayed red enamel over the original finish, without sanding or putting a primer on first, then applied a black coat on top of the red. After that, all layers of finish were sanded down through to the top veneer wood in a few spots to simulate wear, probably with an orbital sander. The final step in the uglification process was he applied a very tough epoxy-like clear coat (or clear nail polish) over those areas that were sanded through to the fake wood.

This also is a very sad tale. It's hard to believe anyone could be so mean to cute little guitars.

Soon after I got this Junior / Special from John, I noticed that small paint chips, red on one side and black on the other, were being left behind wherever I'd lain the Epi down - on the couch, the kitchen table, or the workbench. Since the relic job didn't include a primer or sanding between coats, the new finish was beginning to lift off. One night I absentmindedly started picking away at it with a fingernail, and a whole bunch of paint came quickly off: 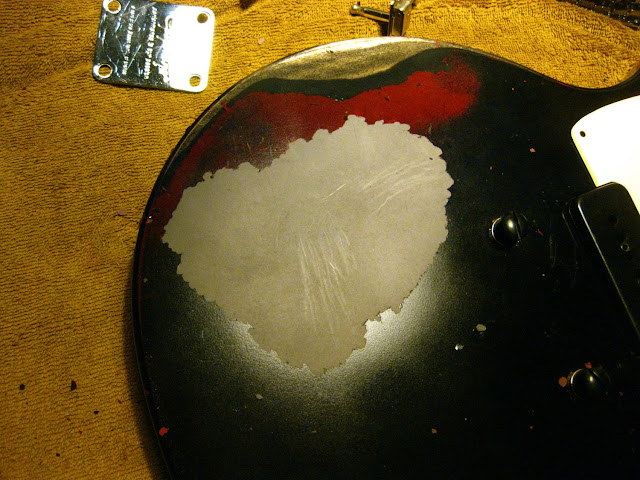 At the same time, I grabbed an unused Telecaster pickguard and placed it on the Epiphone body: 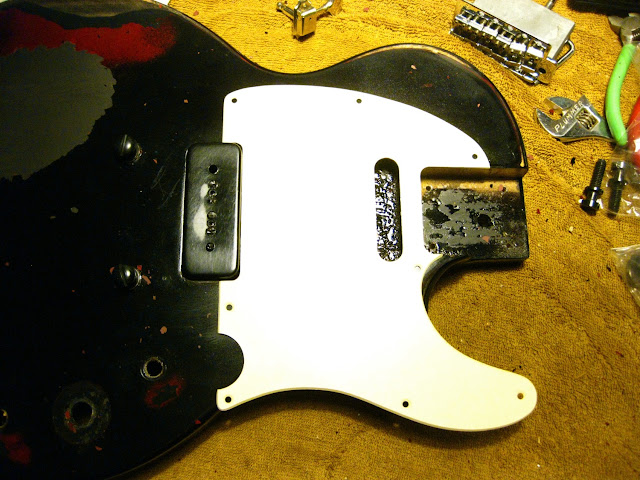 Wow and amazing - the Tele bridge plate cutout on the 'guard perfectly fit the P-90 bridge pickup rout, and the neck cutout was only about 1/8" from fitting. The bottom horn was way too big for the smaller Les Paulish body, but still, it's something to think about.

Next day, I set up a couple sawhorses with boards laid on top, and started scraping off the ugly new finish: 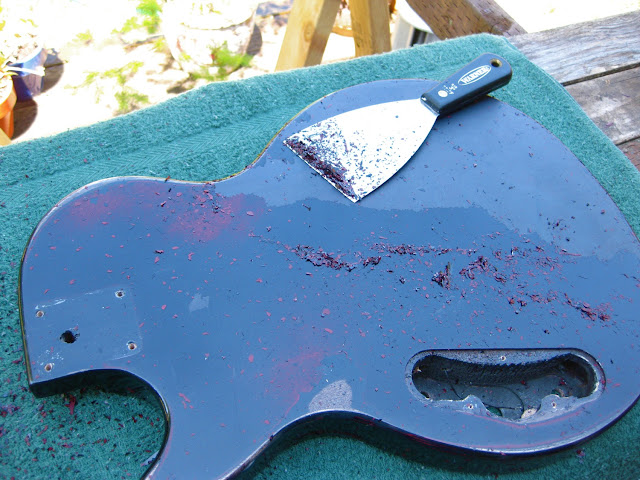 Here's a picture taken as soon as the bulk of the relic paint was removed; I kept the two bridge mounting studs screwed in, to keep paint chips out of the stud anchors: 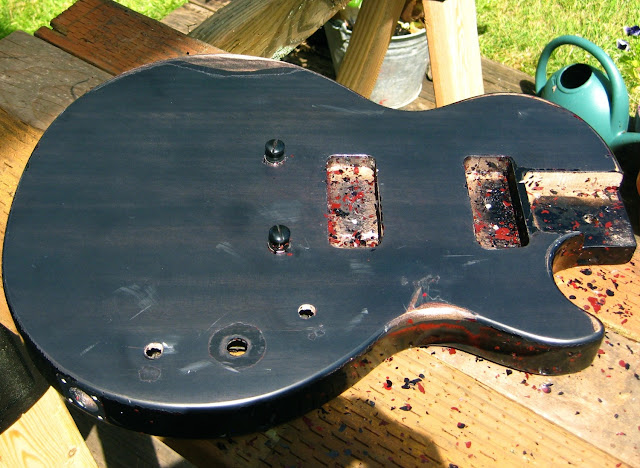 Next step was rubbing it all down with steel wool to get the last paint remnants off, and smooth it all down: 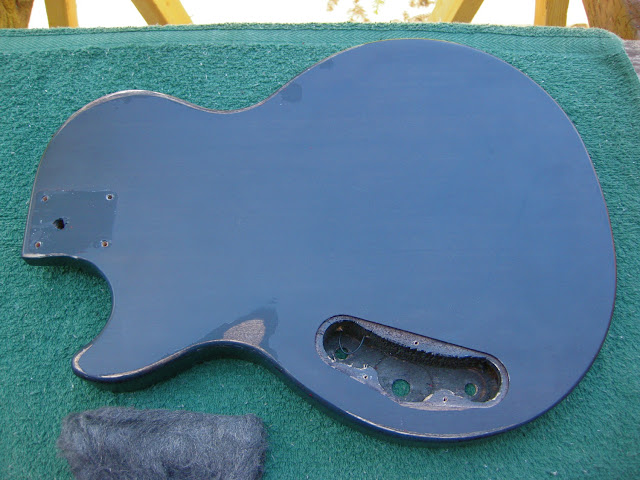 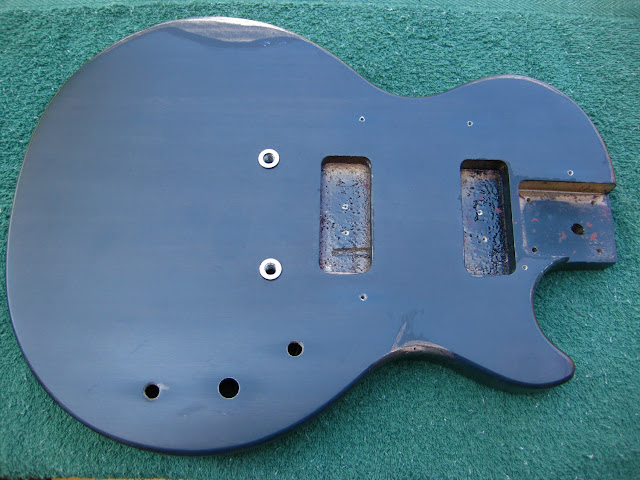 Here are close up shots of two of the fake worn-through spots on the body; note the tough clear coat that resisted scraping: 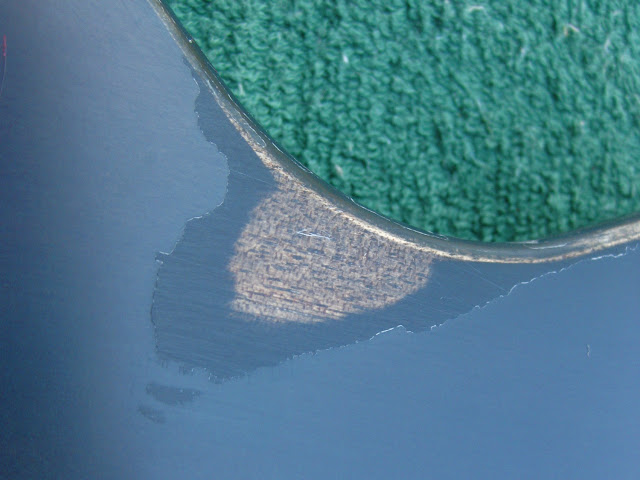 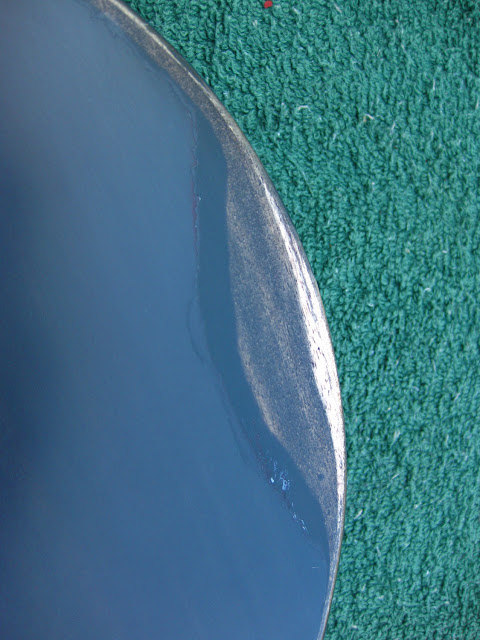 In the next picture, the top had been steel wooled as much as possible without wearing the original finish down too much. It's hard to see the wood grain of the top veneer layer beneath the semi-transparent black satin finish (possibly called "Worn Ebony"?) in this outdoor shot, but it's a very nicely done, subtly attractive top coat: 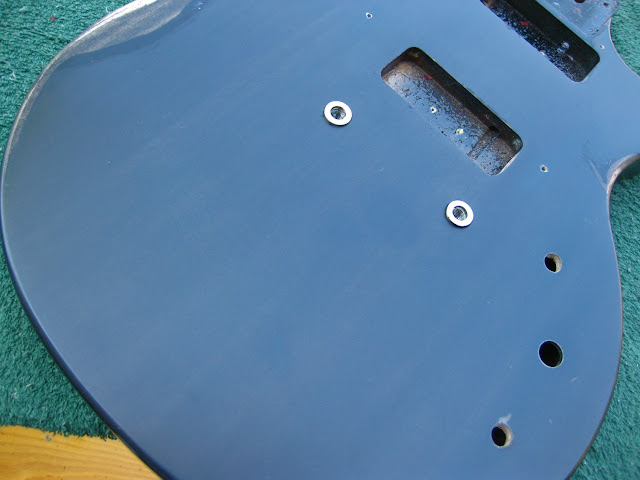 The last five pictures are slightly out of sequence - a pickguard was made after the red and black paint was removed, but before the body was steel wooled. You can see the newly drilled pickguard mounting holes if you look closely.

In Part 2, we'll make (or actually, adapt) a new pickguard - actually the first 'guard this Epi ever had - and look at a couple other mods that might work with the Epiphone Les Paul Special II. In the meantime, we'll end this installment with another view of the restyled ugly little Epiphone: 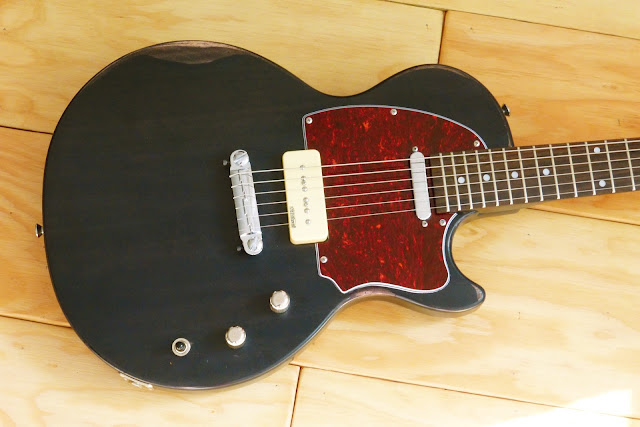 Thanks Nick!That was fun, doing something sort of new or unusual. Cool thing is these guitars are readily available, and the Chinese Junior/Specials (as opposed to ones made in Indonesia) are surprisingly playable, just need better hardware to sound good.
Rock on,
---Jim