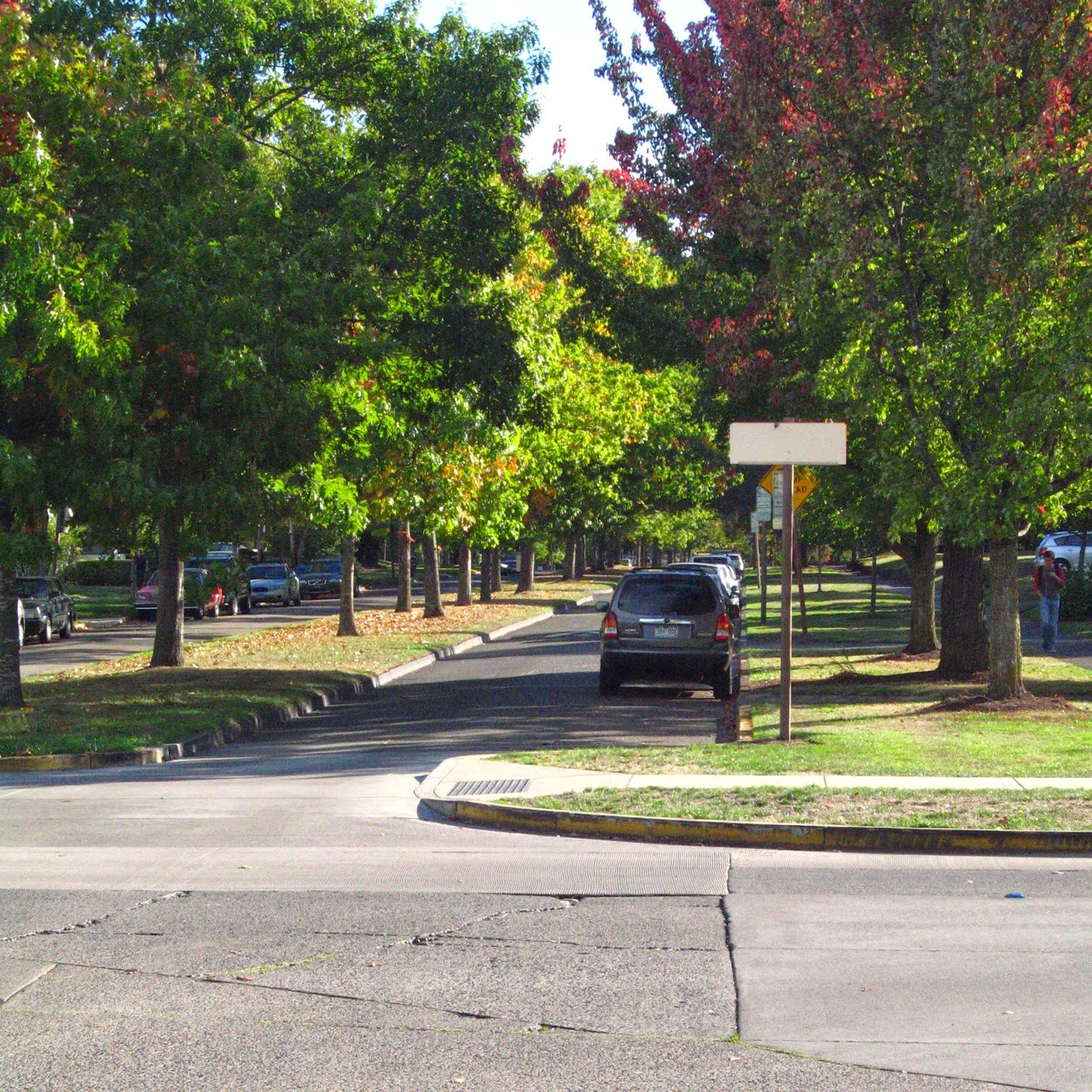 Here's a great word: Eu·phe·mism (ˈyo͞ofəˌmizəm): A generally mild or innocuous word or expression used in place of one that may be found offensive or suggest something unpleasant.

The picture above shows something that traffic control engineers euphemistically call a "Traffic Calming Device"; it's a section of concrete extending way out into the street at the end of a city block, creating a very narrow entrance to the roadway ahead, that you have to carefully steer around. And if you, The Traffic, are being your usual boisterous, rowdy self, you had better calm yourself the heck down, and mighty quickly, or else Really Bad Things will happen.

Now here's where that mild, innocuous expression - traffic calming device - suggests something unpleasant or offensive: if your car hits this barrier at even a moderate speed like 25 mph (40 kph), it will totally wreck the front suspension. Irreparable damage that will make your insurance company total out your car, and good luck getting anything close to its replacement value back from those people.

If you have a nice low-slung sports car, imagine the engine and transmission staying put while the rest of the car keeps on going while you're still sitting in it - just like Wile E. Coyote. Go any faster, and you may become airborne, do a forward somersault, and probably land on your head. Which also sounds like something from a cartoon, but I've actually witnessed that happening to someone else, and it's not pretty, or funny, in real life.

Meet one of these on a dark or foggy night while riding a bike, and you'll most likely go over the bars and do a face plant on the pavement for sure. It all sounds rather harsh, but then again the general idea seems to be that if you're careless or unobservant or speeding, or all of the above, then you need to be taught a lesson that you'll never forget, even after you're dead. It's like instant punishment, but without having to get the police or the courts involved - a genius concept, really.

There's a brew pub catering to the college crowd a block north of this particular traffic calmer; probably no connection between the two, since the bar just opened up recently, and this barrier has been in place for awhile. What may not be a coincidence, is that there's a number of drinking establishments and breweries in this university town, and a lot of traffic calming devices.

Where I live, most of these cleverly designed traffic-control practical jokes aren't marked with bright paint or reflective markers, there's no prior warning signs beforehand, and they're almost impossible to see in a nighttime torrential downpour, and this is rain country. Amazingly, after all this time living here, I haven't run into one. Not yet, anyway. It's the weekend, I'm running low on micro-brews; time to head down to the Jiffy Market.

Good to see this: "Our smart solutions improve safety and prevent accidents at entryways, in facilities and on roadways of all kinds." traffic calming, traffic calming devices

Cool! Thanks for commenting! Say- you're a bot, aren't you? Hey, that's cool too, maybe.