The Future Has Passed Us By 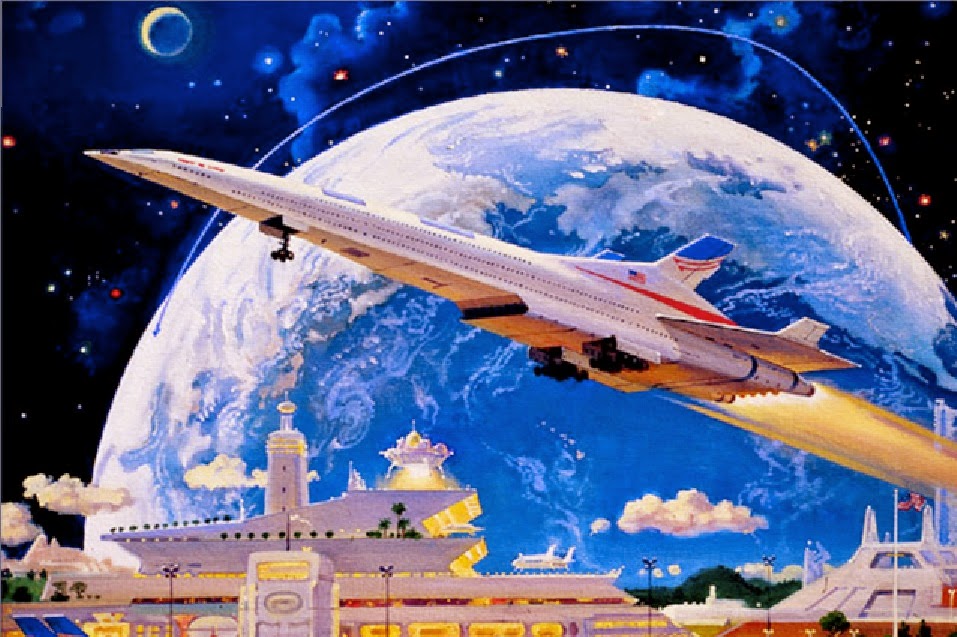 Yesterday I was taking the trash and recycling bins out to the curb, and as I got to the street the collection truck went by, at least an hour earlier than usual. Well, crap. Okay, I know they say to put the cans out the evening before, but sometimes odd things happen in the middle of the night, like drunks and dogs. Someone driving by after the bars close, may be able to spot your car and swerve around it, but they'll hit your trash can for sure. As for dogs, there used to be a lot more really big dogs around, and they would think it was fun to knock a garbage can over and paw through it; nowadays, it's the pet walkers stopping by and leaving a nice warm bag of poop in your trash. 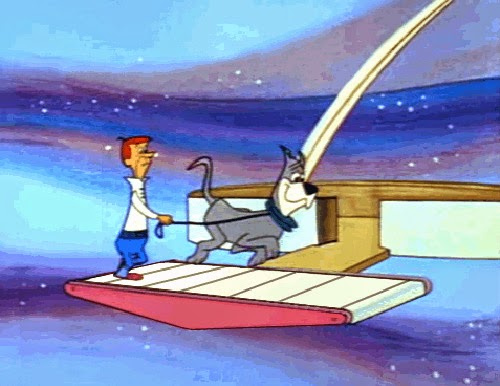 Not only do we have to go through our refuse and separate out the glass into another tub, and read the codes on the bottom of plastic items to determine whether it can be recycled or not, while at the same time making sure not to leave any food residue on recyclables, now we've got to get all that stuff out there at the crack of dawn.

Not so very long ago, we were assured that by the turn of the 21st Century, we would all be living in space age design houses full of amazing gadgets, including appliances that would convert trash into usable items, while we commuted in flying hover cars to our robot-assisted dream jobs at the center of fantastically futuristic cities, and vacationed on the moon or Mars, courtesy of commercial space-liner travel.

Of course, we now know that most all of those happy science fiction fantasies didn't materialize. Google around and there's some amount of speculation concerning just how all of the future-gazing oracles of the previous age could have gotten it so wrong, but the simple truth is that everyone living during the mid 20th century had every reason to believe that the rate of technological progress would remain steady, as it had been all of their lives. 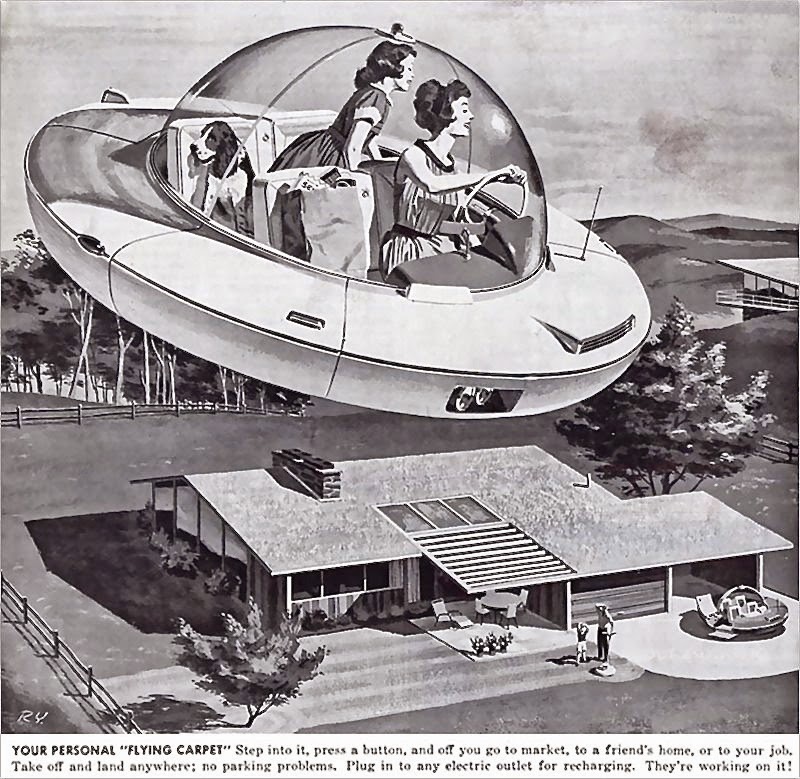 Someone born at the turn of the 20th century would have seen amazing changes just in the course of fifty years. In 1900 they would have taken a horse and buggy on dirt streets to the station to catch a steam powered train; by the late 1950s one could jump into a big metal sled capable of traveling over a hundred miles an hour, and drive to the airport to board a sleek aluminum tube jetliner that could whisk you through the stratosphere, anywhere in the world, at close to the speed of sound.

It wasn't just transportation; virtually every field of technology also achieved quantum leaps in knowledge and application during that time, and no one thought there would ever be a time when things would slow down. 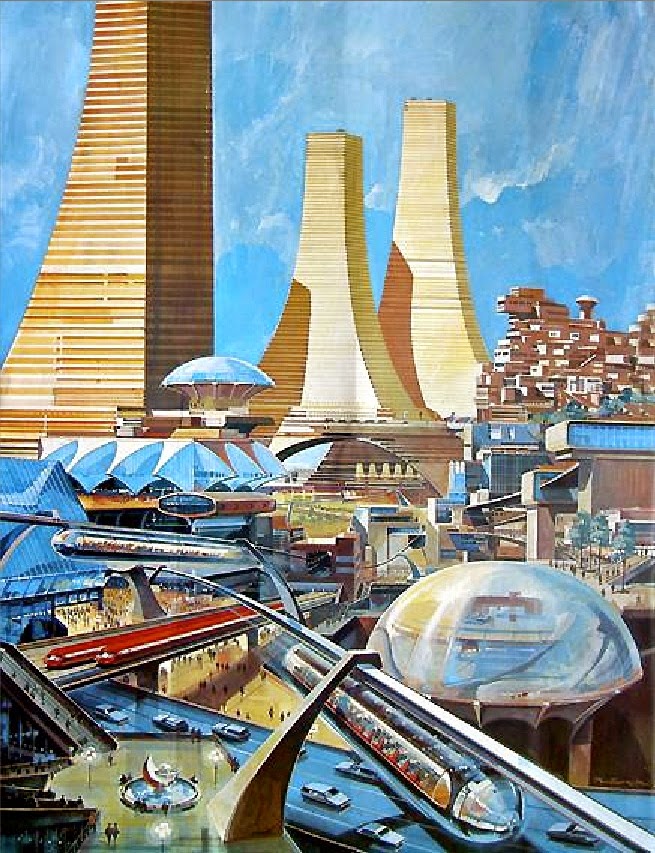 But slow down it did; sometime around 1960, for whatever reason, the rate of technological progress began to wind down to a crawl, and things just started to stay the same, year after year. Oh sure, we now have the internet, and mobile phones, and satellite TV, but the basic scientific knowledge that enabled the development of all these had been in place since at least the 1920s, if not the mid 19th century. We now live in an era where the dictates of the marketplace require the labeling of merely incremental innovation as being somehow revolutionary advances, and we're led to believe that the world of today is some sort of bright shining techno paradise. But the reality is somewhat different. 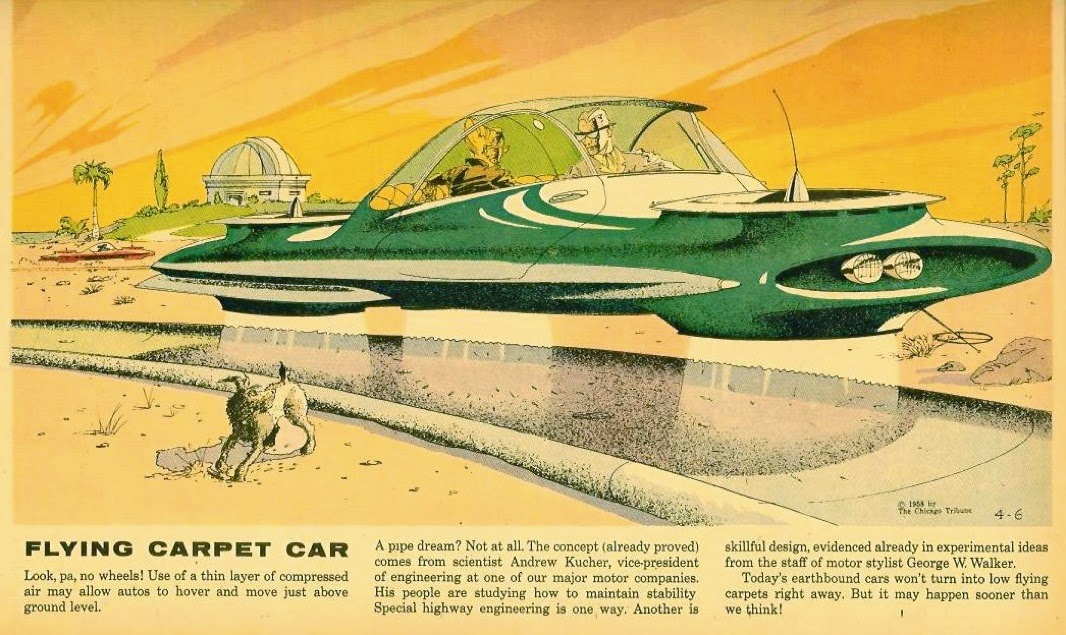 We are now almost 20 years late on all the glowing predictions of a golden 21st Century future, and today everything is essentially exactly as it was back in the 1950s. Our automobiles still use petroleum combustion piston engines and roll on rubber tires down our cracked and pothole filled streets, we're still entertaining ourselves in front of little illuminated screens, the cities are if anything much more the worse for wear than in the past, and even our commercial air transports are virtually identical to the 707 jetliners of 1958.

Oh I forgot - there are a couple big differences. We're now sorting our trash and putting it in different bins, and dog poop goes into little plastic bags. Welcome to the future!