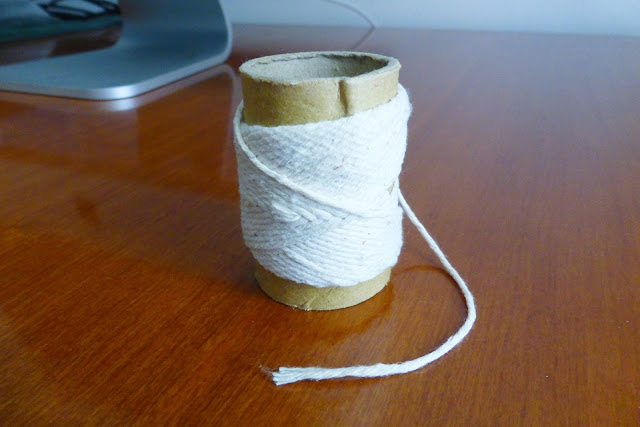 There's an old roll of cotton string hanging around in the junk drawer in the kitchen - bought at a hardware store in Colorado over 20 years ago, made it through a couple moves, used for a ton of stuff over the years, and now it's almost gone. Technically (but how technical can you get with string?), it's probably more properly called twine, 8 ply - eight smaller threads twisted together - very simple yet strong. One thing that's changed over time, due to being tossed around in the drawer and sometimes left outside, is that the string is getting kind of "fuzzy".

In a back corner of a guitar parts bin, there was a broken single coil pickup. I can't remember what model of guitar it came out of, but when I replaced it for a friend, I tossed it into the bin and forgot about it. The coil is taller than a Strat pickup, with flat top Alnico magnets and unusual scalloped mounting flanges. It has a whole lot of wire wound around the magnets, and back in the 1970s it was probably hotter than most other pickups.

Old dead pickup, old almost used up roll of string... Sounds like the ingredients for another experimental science project. I wrapped a layer of string around the coil; toward the top, you can see where I started the string wind, and some of the red-colored coil wire wrap is peeking out: 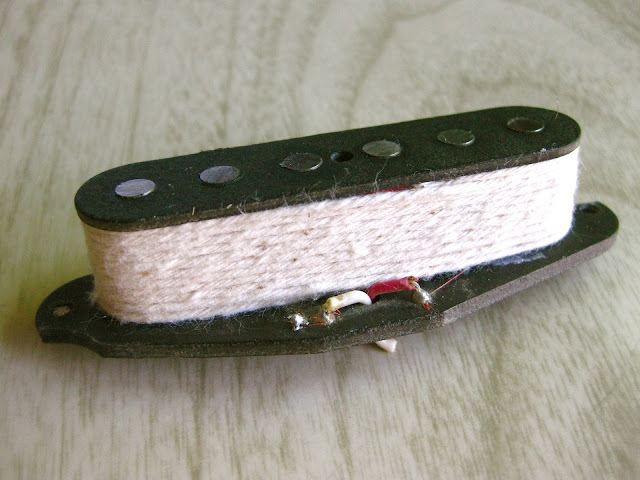 Wanted to do at least two wraps of string, but the magnet wire was wound very close to maximum capacity between the coil formers (bobbin, flatwork, whatever). Next, some amber shellac was brushed on liberally over the string, and allowed to dry for a couple of hours. Then, another application of shellac, and the pickup sat overnight. 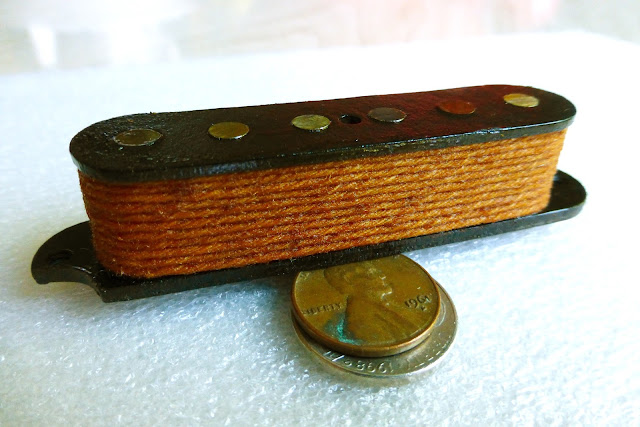 Looks pretty cool. Although the shellac still has a wet appearance, it's actually quite dry, and the whole layer of shellacked string has glued itself together into a solid and very hard protective shell around the coil windings. If this pickup ever got rewound, it would need some protection, since it's too large to fit under a Strat style cover. Now, I'll consider having this old unknown pickup salvaged, and do the shellacked string thing over again.

Somewhere in the distant past I've seen a transformer that had a similar appearance; maybe in some antique military electronic piece from the 1920s (?). In any case, as an experiment it was at least a cosmetic success. Whether or not the hardened shellac has any tonal advantage or makes horrible squeals at high volumes, won't be known until it gets repeated on a working pickup.

Yes, we have achieved success with dead material; now it's time to see what happens when we experiment on a living subject - alive, I tell you, alive!!! 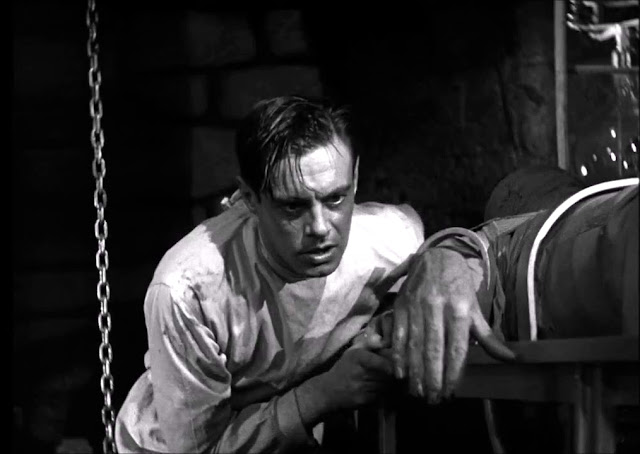 Credit to James Whale and Colin Clive, and Boris Karloff's hand. Unseen off camera, Terri Garr gazes adoringly at the Doctor, a quizzical look on her lovely face - no wait, that's another movie.