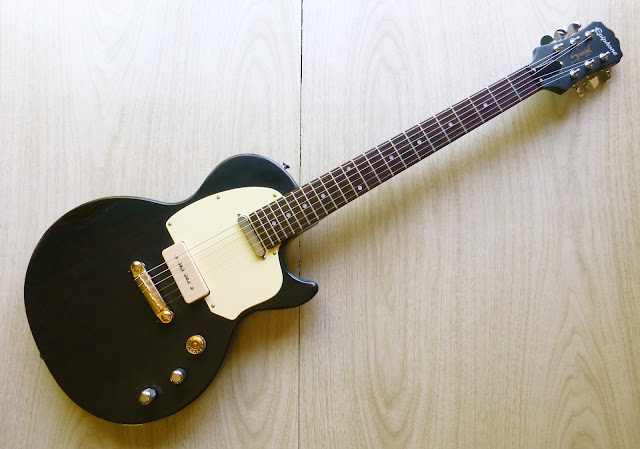 In the evolutionary cycle of this Ugly Epiphone Junior / Special, we're almost at the point where it's complete enough to play, take to jams, and figure out what happens next, if anything. Last installment, Part 3, we installed a set of nice high quality Gotoh tuners, really necessary for playability - gotta have strings to play. With strings on, the Ugly Epi looked like this: 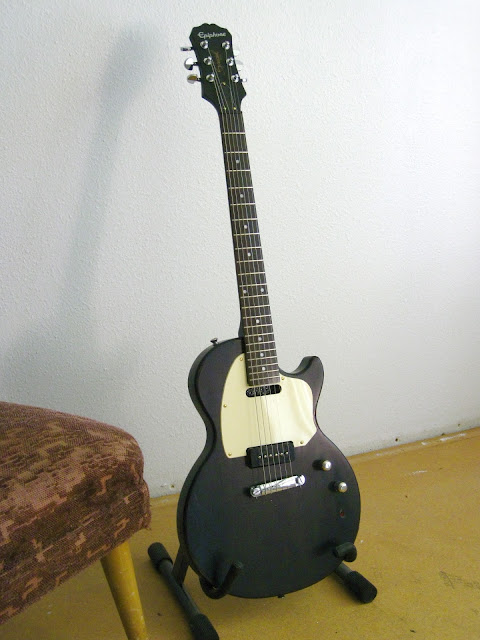 The Epi was put in the bare bones wreck of our living room, as a symbol - it was incomplete, and so was the room, while we tore the carpet out (I hate carpet in general, an unsanitary never totally cleanable societal plague), did a couple coats of pure white paint, and put in a wood plank floor - which will be a subject for another blog post. As seen above, the Ugly Paul had new Gotohs, no neck pickup, a Mighty Mite made in Korea P90 bridge pickup (with no cover!), mismatched strap buttons, two pots installed but only the volume wired up, and an original issue Epiphone wraparound tailpiece bridge.

That OEM bridge was a real horror story, and may explain why so many owners of these guitars get rid of them. The guitars, that is. Every time I or anyone else picked the Ugly Epi up, it was out of tune. You could literally tune it 50 times, and it would be all whacked out within ten minutes, every time. Within days, that was replaced with a Mighty Mite tailpiece, another really high quality Korean part: 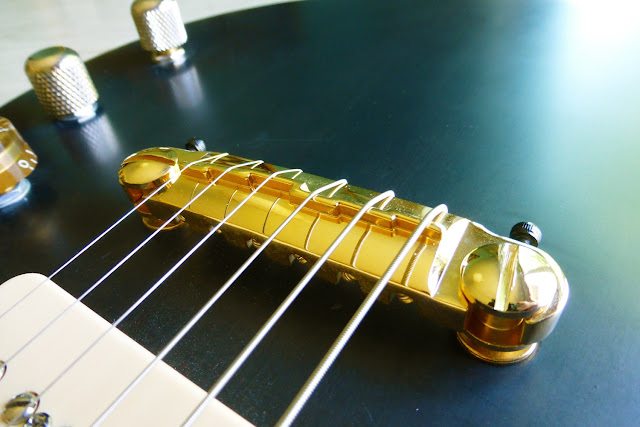 The MM bridge is twice the weight of the original, and seems to add a lot, tonewise - girthier low twang, clearer high end, and more defined mids. The anchors were replaced as well, and after that, rock solid tuning stability, hooray. And yeah, I know, it's gold plated, doesn't match anything else, but for the time being that's okay. While the strings were off, the P90 got a cover from StewMac to hide its nakedness: 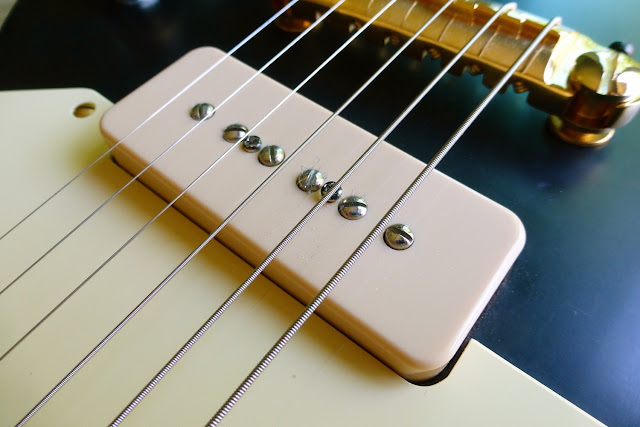 Also from StewMac, a pair of new nickle plated strap buttons, a gold "speed" volume knob, and a Gotoh nickle jack plate to replace the flimsy plastic one:

Next, a neck pickup was put in. Found a good deal on a gen-yoo-wine Fender Telecaster neck pickup on Reverb, and then puzzled out how to put it into a guitar that didn't have anywhere good to put it. The P90 neck pickup rout was a large deep swimming pool, and the WD pickguard was kind of weird - it had the modern 8 body attachment holes, but no mounting holes for a hanging Tele neck pickup. It would have relied on a vintage style screwed down to the body pickup arrangement, and that was a no-go in the deep P90 rout. So two mount holes were penciled in and drilled in the pickguard: 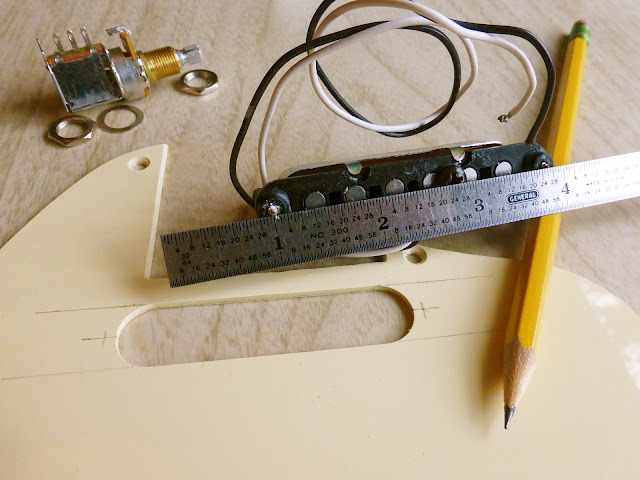 This project was full of "firsts" for me, not being very experienced with guitar hack mods. The only other Parts-O-Casters I've done were fairly easy to do, using parts that were meant to go together. In the background of the picture above, you can see a Bournes pull pot, which ended up doing a couple duties in the Ugly Epi. Here's the neck pickup mounted: 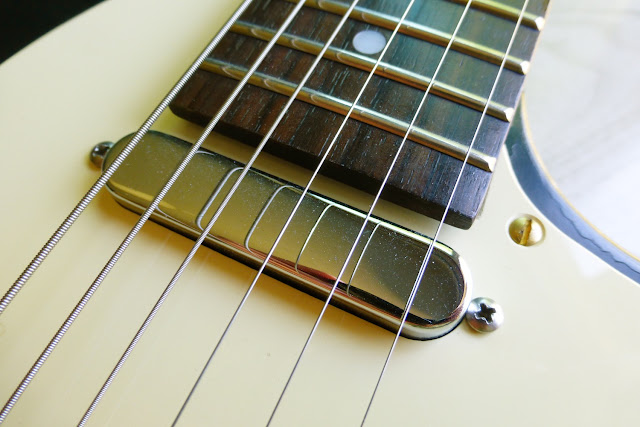 At first, only the volume control was wired up, and that was okay to get started, but with two pickups, there had to be a switch of some sort. I didn't have a three-way, so the pull-pot was put in and wired to kick the neck pickup on, and gradually blend it in with the bridge pickup - only two "switch" positions: bridge only, and neck + bridge, plus variable neck blending tones: 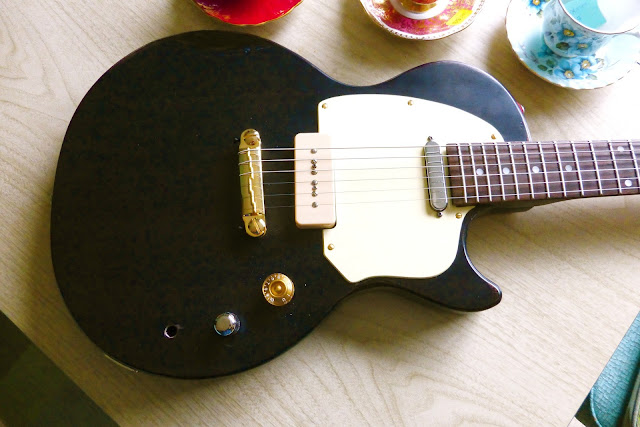 Interesting and different switching scheme, and then a tone pot was added, but still no 3-way switch: 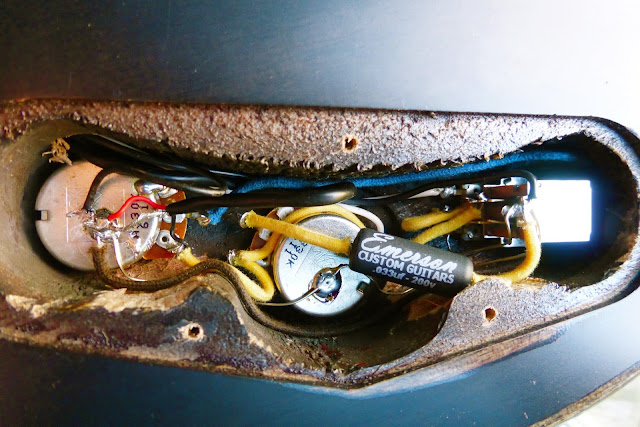 That paper in oil capacitor sounds very decent; I guess the skinny on the .033uF value is it's supposed to sound very like an age drifted Sprague Bumblebee .022uF. Maybe. But still, quite decent tone. Also in the above photo, you can see the strange and crazy "not-wood" this Epi is made from; some sort of wild heat and pressure treated wood by-product creation, that actually has decent tone and stability. It's not the space age body and neck materials that hold Epiphones back (or down), it's the crummy hardware.

Okay, and now a word about "XGP" brand potentiometers. Another house brand at GFS, and the big question is: where do they find all the crappiest crap in the world, to mega hype and sell on their site? And no, I didn't buy these, a friend gave them to me to try out. I sometimes see folks on internet forums gushing about how great their GFS bodies, necks, and pickups are, and it feels like it's some kind of Bizzaro World equivalent of websites devoted to fine dining at McDonalds. And what makes a cheapo part deserve a label like crap? It isn't an unfounded value judgement - how about uneven taper, noisy even when new, and not zero volume in the off position?

The small control cavity originally had mini pots (and will again before we're through), and a previous owner did a creative hack job of enlarging the space enough to fit large pots, and still have mounting edges for the cover.

Well that's about it for now. Here's another view of the pickup and pickguard area: 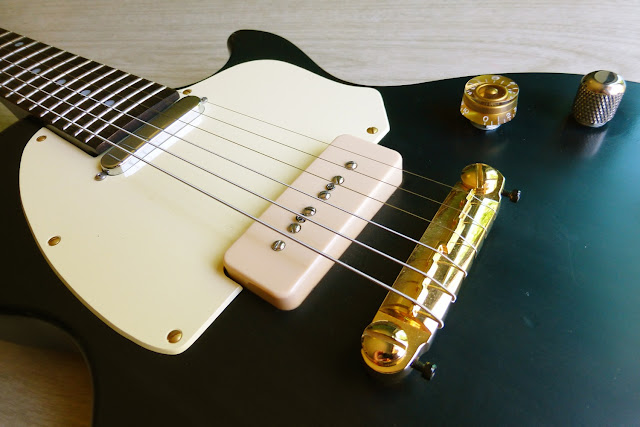 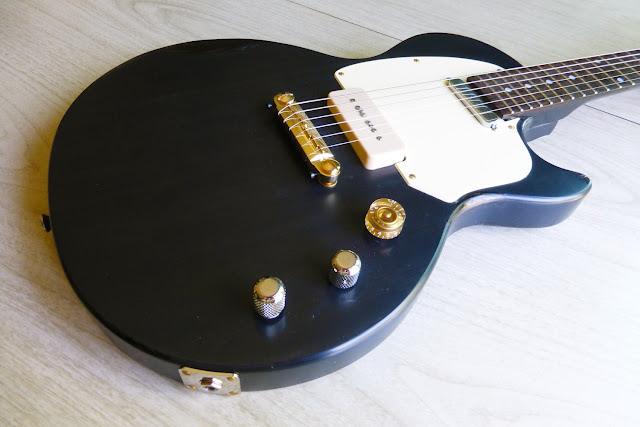 And a picture of the Ugly Epi hanging out with some new friends. Underneath all that junky old stuff, you might catch a glimpse of the newly done plank floor: 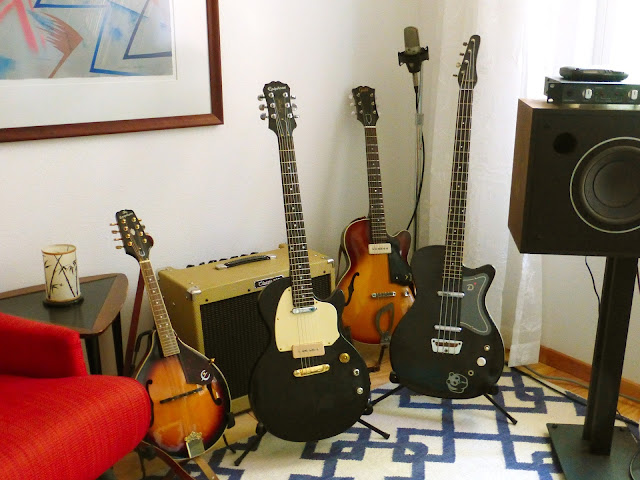 So the Ugly Little Epiphone Junior Special is done for the time being, while other things happen around the house and in our lives. But eventually, it's going to get some keeper stuff, like another bridge pickup, a non-gold bridge, a 3-way switch, some decent quality potentiometers, and a nice new faux red tortoise shell pickguard, if we can ever find and hunt down a faux red tortoise. 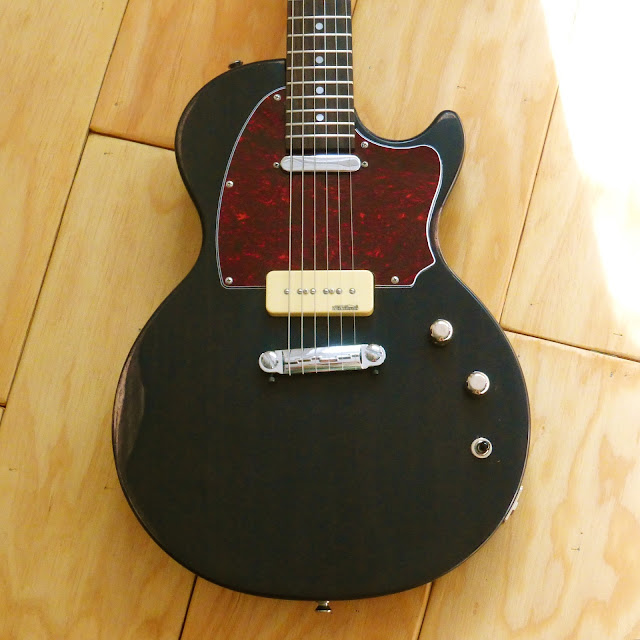 All photos taken with either a Lumix ZS-25, or a Canon 790IS. Click or tap on any photo above to access larger, higher def images.