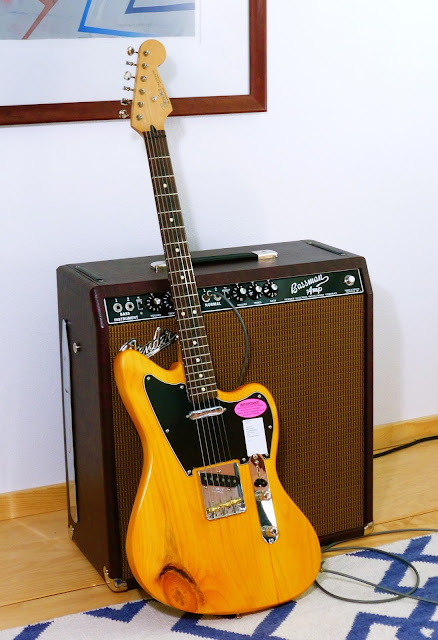 If you've read the other posts about putting this Offset Barncaster project guitar together (Part 1, and Part 2), you'll notice I assemble at a glacial pace. But the truth is even worse: it was mid November of last year when I saw the NoMoonLaser knotty pine body for sale, fell in love, and impulse bought it with no definite plans for turning it into a playable guitar. Since then, it's sat around like a beautiful old Greek statue with missing body parts, looking at me accusingly and wishing it at least had a neck, while I paid more attention to other projects. But now, it's almost done.

This week the pickups and controls got wired up. Being a hold-over from the dawn of the electric guitar age, a stock Telecaster control plate circuit is very basic, and that's a good thing since there isn't a lot of room within that narrow control rout. Sure, it's possible to put in a 4 or 5-way switch and trick wiring for phase, series and other mods, or making a late 1940s original Broadcaster type wire-up; but this time it'll just be the standard (and simple) 3-way Tele circuit from the mid-50s on: 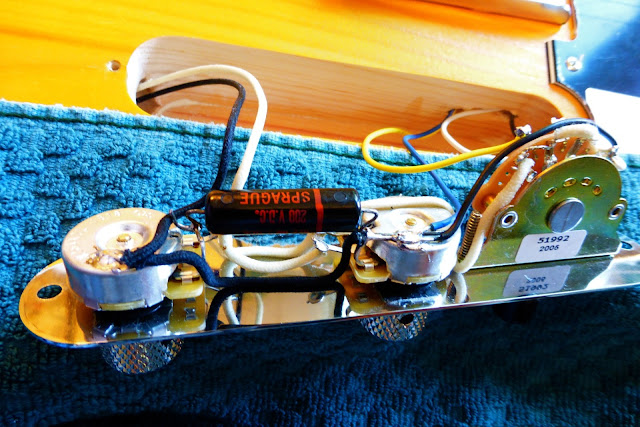 That big old Sprague "Black Beauty" capacitor is a real tone monster, with a distinct quasi-"wah" sweep. I considered flipping the plate around so the tone control would be more readily accessible for doing that chicken pickin' tone knob roll thing, and I still may. To make that possible in the future, all wires from the pickups were left unclipped.

Besides the tone cap, the rest of the parts are a pair of CTS 250K-A potentiometers, and a Fender brand 3-way switch, which might be made by Oak Grigsby - its design is certainly 1/1 with an Oak switch. On the top of the plate are a pair of weighty high knurl nickel plated brass Gotoh dome knobs, and a Fender "barrel" style switch knob / tip. 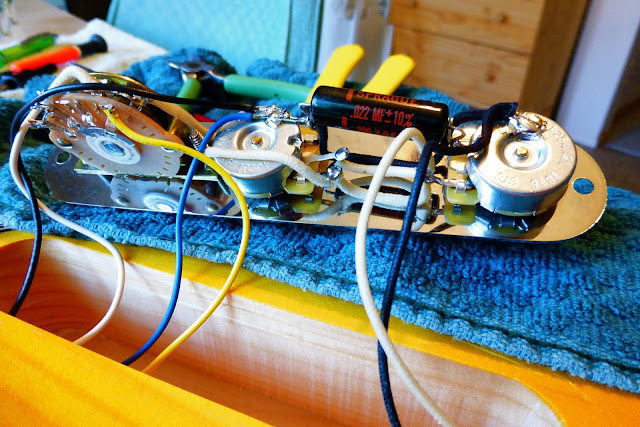 An ingenious modern design innovation is the ElectroSocket output jack holder; this one is from Allparts. After soldering up the two output wires, one nut and a washer were put on the threaded barrel of the jack: 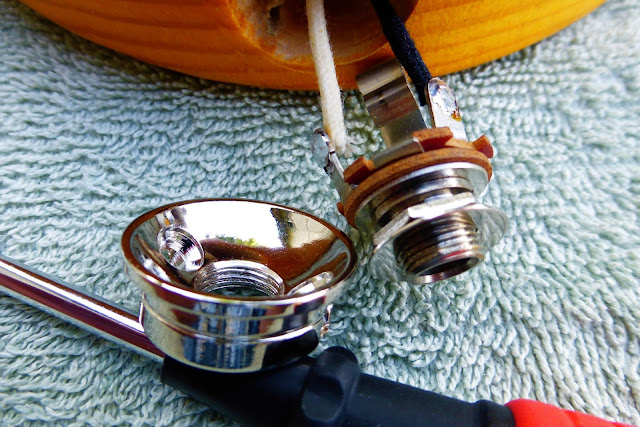 Then the jack holder / socket was spun onto the jack and snugly hand tightened prior to attaching it within the body's output jack hole: 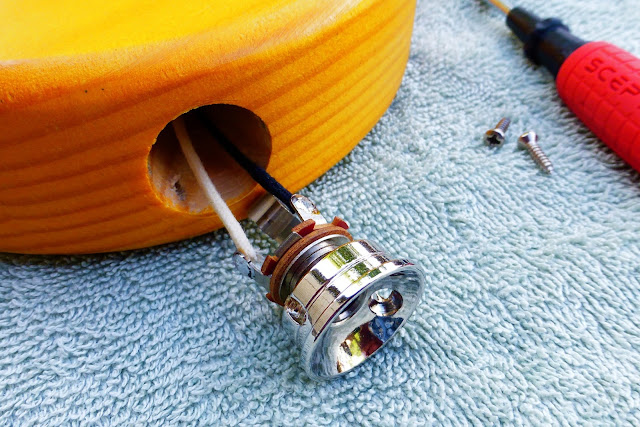 The nut + washer stack below the body of the socket/jack holder resulted in lowering the barrel of the jack down almost flush with the bottom of the ElectroSocket's cup. This way, when a cable plug is placed into the cup, the plug tip naturally and effortlessly slides into the jack with a minimum of hunting around. Yep, just stick that tip near the socket, and it slips right in, ready to rock and roll all night long, baby: 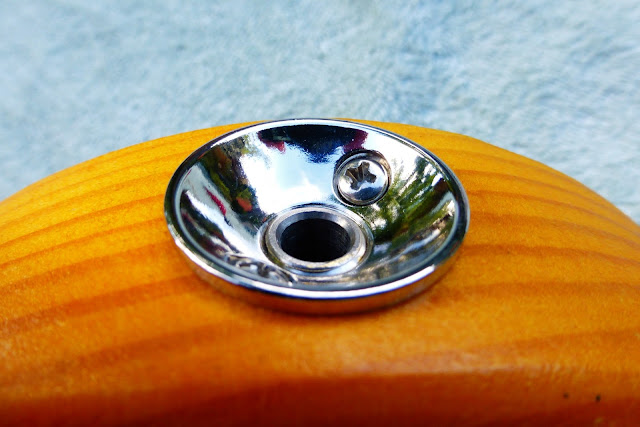 Useful with other pickups than just Strats, these are good starting points, with final adjustments made while playing and listening ("by ear"), but often it's okay right off the bat.

The above method assumes the use of vintage style pickup sets - with all pickups identical spec, as they used to be before dedicated position specific pickups with differing output strengths, pole piece magnetic orientations, and coil wire winding directions came along. Unlike Strats, Telecasters almost always had dissimilar pickups, so we would set them up by ear, except for the very first measurement, which was to use a nickle (US 5 cent piece) as a gauge between the high E string and its bridge polepiece. And a new Tom Jefferson nickle is very close to 2mm in thickness: 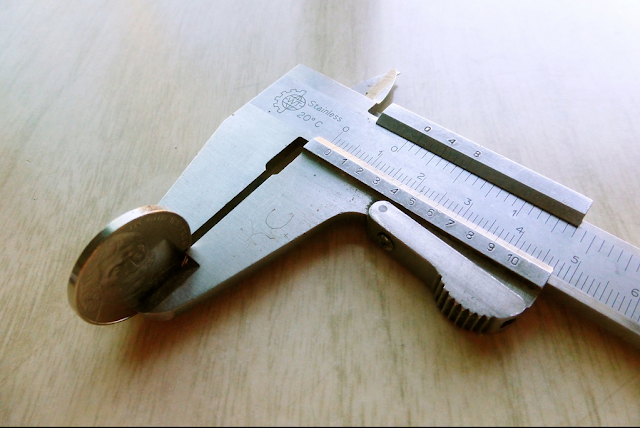 In the case of the pair of Telecaster pickups used for this guitar, they're well matched: the Fender Vintage '62 bridge pickup metered out at 6.19K, and a Fender Tex Mex neck pickup at 6.11K, and both have the same coil winding direction and pole piece orientation. 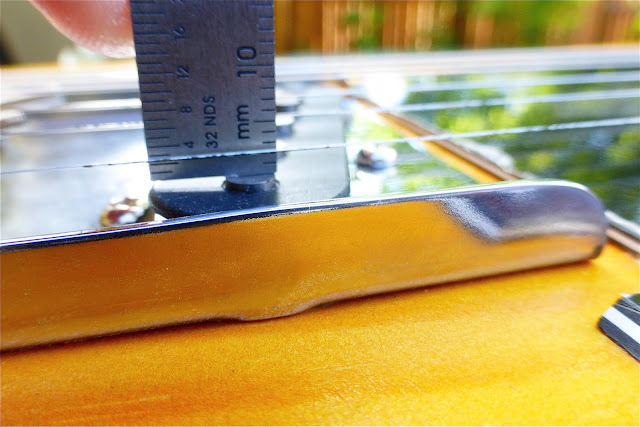 Note the rust on that "new" string; a couple years ago I bought a few sets from a seller on the humid Gulf Coast - a bad purchase. Anyway, now I have various odd and yucky strings for use during set ups. When we're all done, a new non-rusted set of GHS Gilmour 10-48 will be installed on this guitar. 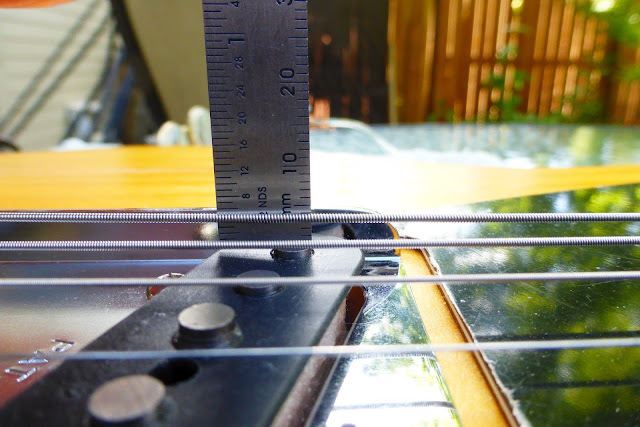 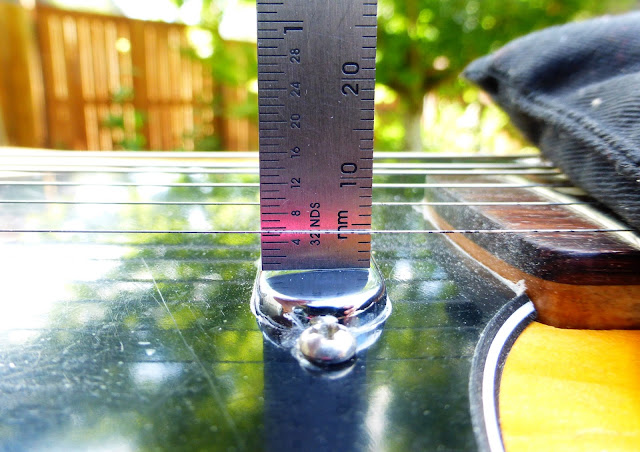 The neck pickup's low E was set to 5mm below the bottom of the string. Note in the above picture the substitute for a finger pressing on the string behind the last fret - a small canvas bean bag filled with tiny steel pellets. An all purpose floppy weight, I've also used it as a stable place to put a compact camera, atop an uneven or sloping surface.

Nest step will be a tonal test at speed, followed by new strings and any needed action and intonation adjustments. After that, we can finally remove the protective plastic film on the pickguard.

You might be curious about the amplifier in the photo at the top of this post. On loan from my friend David in Massachusetts, it's his own creation, a model that Leo should have made, but didn't. A mid-'60s Fender Bassman head chassis in a custom made 2 x 10 combo cab from JD Newell, it has 50 watts of real, all tube power into a pair of very efficient Eminence Ragin' Cajun 10".

Under the hood, an almost completely rebuilt circuit, using many new and old stock parts, stays close to the original AA164 schematic, with the exception of minor yet critical voicing and noise floor lowering mods. The resultant compact (22" x 22") powerhouse is soulful and alive with touch sensitive dynamics, and is incredibly toneful at any position of the volume control on either of the separately voiced input channels, from barely cracked open all the way up to insanely loud, tight and girthy rock tones at 7 or 8 on the dial. All in all, this re-imagined Bassman is a great combination of power, tone, portability, and vintage mojo style.

All pictures taken with a Lumix ZS25 pocket travel zoom camera. Click or tap on any photo above to access larger, higher def images.
Here's a link to the final post in this series, Part 4.