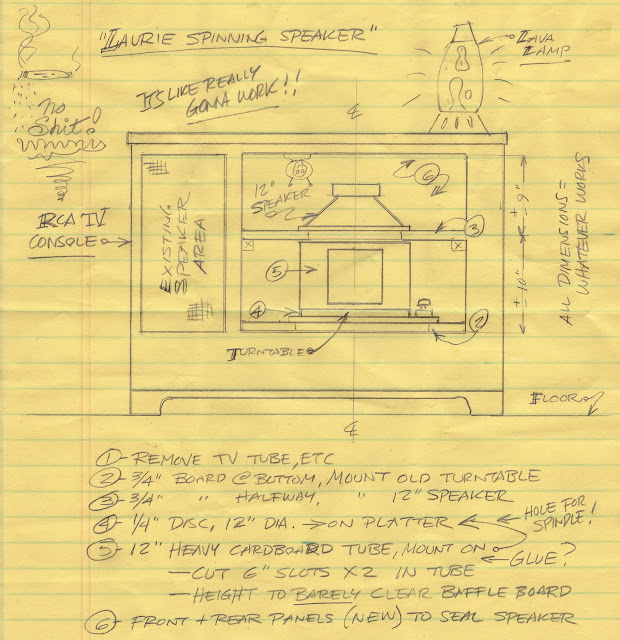 A long time ago, when we were teenagers, and we were so dumb that we thought anything was possible, my friend and musical buddy Tommy and I made a Leslie style rotating speaker, out of mostly junk parts.  And it worked great, and sounded awesome.

Tommy had inherited an old Thomas organ from his grandfather; I remember opening up the back and seeing what looked like a thousand vacuum tubes all lit up, like a picture of an early Eniac or Univac computing machine - wow.  Even though it sounded pretty darn good to begin with, what we really wanted was to have that swirling ethereal slow-speed Leslie spinning speaker chorale sound - like that "Whiter Shade" tone! - on some of our songs, but we were young, and as well as being really dumb, we were also really poor.  After one late night jam, we rolled up a big fat smoke, got some paper and a couple pencils, and made some plans.  By the next weekend we had our raw materials, and got to work.

A gigantic old broken console TV gave us a wooden cabinet, after we pulled out the electronics and threw the guts into a roll-away dumpster at the carpet shop down the street.  The TV's cathode ray tube used to sit on a shelf, and in that we mounted a salvaged record player turntable.  About a foot above that, we installed another shelf, with a circular 12" hole in it, put a Fender speaker on it facing down, and that was now a baffle.  Tommy had found a one foot diameter heavy gauge cardboard tube, out of which we cut a foot-long section, put one large square-ish hole in it, glued it to a 1/4" plywood disk with a hole in the center, and placed that whole assembly on the turntable platter.  Between the top of the now-rotary tube on the record player, and the bottom of the baffle, it was a tight fit, maybe just an 1/8" of clearance.  A couple of big vents in the TV cabinet to let the sound out the sides as well as the open front and back, and two panels of plywood towards the top to isolate the 12" speaker, a long speaker cable hooked up to a Bandmaster head, and it was a done deal.

The turntable had three speeds, and both 33 1/3rpm (33 and 1/3 Revolutions [rotations] Per Minute - for Long-Play "LP" record albums) and 45rpm (7" jukebox sized singles) sounded big and dreamy for soft swirling chorus tones.  The 78rpm speed was a bit like a drunken wobble, kind of strange, and there wasn't a fast jazzy church organ vibrato sound, but that was okay, the slow speeds sounded fantastic, filling the room with psychedelic washes of spinning tone colors.  We put the cabinet on top of a coffee table - high enough off the floor so Tommy could easily reach over and turn the record player (and the effect) on and off while he played his Thomas organ.  Of course, it wasn't a real Leslie, and we couldn't call it that.  We named our creation "Laurie" instead - Leslie's little sister Laurie - and everyone we jammed with was impressed with Laurie, and to tell the truth, so were we.

Just to prove how dumb we really were, Tommy and I thought the Thomas Organ Company would be thrilled to have us visit them and show off our creation - we were sure that after getting a taste of our genius, they would hire us to do product development, and maybe even put Laurie into production.  I borrowed my dad's big Pontiac station wagon, we loaded Laurie into the back, along with a change of clothes and our old beat up Martin guitars - my '47 D-18 had 3 big cracks in the back that was patched up with fiberglass cloth and resin, and Tommy's early '50s OOO-18 was painted in metal flake red - we gassed up, hit the road, and headed out to the Thomas factory in Sepulveda, California.

Besides Hollywood, the Beach Boys, and Richard Nixon, Southern California used to be home to some powerhouse musical manufacturing outfits: JBL and Altec Lansing speakers, Fender amps and guitars, Carvin, Standell, Rickenbacker, Mosrite, UREI, Dobro, and many more.  In fact, besides making tons of organs, the Thomas plant also made Vox amps, fuzztones, and wah-wah pedals.

Early Monday morning, with our hair neatly combed and clean shirts on, we announced ourselves at the receptionist's desk in the main lobby of the giant manufacturing plant, and sat down in the waiting area.  And we waited.  And waited.  It felt like hours, but probably no more than 15 or 20 minutes later someone came down the hall, shook our hands and introduced himself.  His name was Don, and he even looked like a "Don": crew cut, grey tweed slacks, short sleeved button down white shirt and tie, black horn rimmed glasses; the only thing missing was a pipe.  A nice guy, no nonsense, got right down to business - "So what can I do for you boys?"

We told Don about Laurie, and straight away he went and got a big rolling hand cart, and we all went out to the parking lot, unloaded Laurie, and brought her inside, down another hallway, and into an audio testing room.  Tommy's eyes popped out when he saw all the electric organs sitting around, and and when Don suggested hooking Laurie up to a brand new Italian made Vox portable organ, all shiny black and orange plastic with chrome legs, I thought Tommy was going to pass out.  Don flipped some switches, and Tommy ran through a couple Ray Charles blues turn arounds, Laurie sounding great as always.  Don seemed to like it; "Well boys, I gotta say I'm impressed with what you've done here.  Say - you guys hungry?  There's a good Mexican place down the street, and I'm buying!"  Like I said, a real nice guy.

Don told us, over tacos, chile rellenos and no beer (he could see we were underage - oh well), that the rotary speaker concept was a patent protected technology owned by the Leslie Corporation, and that Thomas Organs felt that, being decades old, and a mechanical process, it was an outdated system.  Furthermore, Thomas was "committed to always being at the forefront of new audio innovations, and the future, boys, is in electronic sound enhancement!"  After lunch, we went back to the Thomas plant, and Don took us into yet another testing lab, and showed us a concept project they were working on - a futuristic looking console organ with an entire effects section built in.  Various switches could turn on reverb, delay, volume modulating tremolo, pitch shifting vibrato, some kind of weird spacey out of tune effect like robots talking, and even a fuzz tone; beside the usual volume swell treadle sat another pedal that made a wah-wah sound.  Tommy was captivated by all of that, and Don was all smiles explaining the controls to him.

Later, back in the lobby, with Laurie back on the hand cart, Don gave us his card, said again how impressed he was with our ingenuity and initiative, and that the company could always use more creative thinkers like us.  He suggested taking some electronic engineering classes when we got to college, then get a degree in an associated field, join the Audio Engineering Society, and besides all that, keep playing music.  And when we felt we were ready, to come on back and get in touch, and he would introduce us to some of the people in charge.  Of course, we thought we were ready to get to work right then and there, but it was obviously not so simple.  We thanked Don for his time, trundled Laurie back to my dad's car, and we drove slowly away, down that almost empty palm tree lined street, lit brightly by the Southern California sun.

Taking the long way home, Tommy and I went out of our way, stopped at a beach, and walked out onto the sand.  Lighting up our first doob of the day, we sat there watching the rollers come in, digging on the cool fresh breeze coming off the Pacific Ocean.  We both agreed that maybe Thomas had it all wrong - the new electronic effects were cool and intriguing, sure, but a real old-fashioned spinning speaker sound was still the best.  After all, doing Ray Charles songs on an organ instead of piano was just different enough, but with a fuzz tone and wah-wah?  Waaay too freaky, man.  Whoa, yeah - what'd I say?

We also met some cool and intriguing people at that beach, played our guitars and sang some songs, partied into the night, and ended up staying for a couple of days in that seaside town.  There were a few more adventures on our way back home, but that's another story entirely.