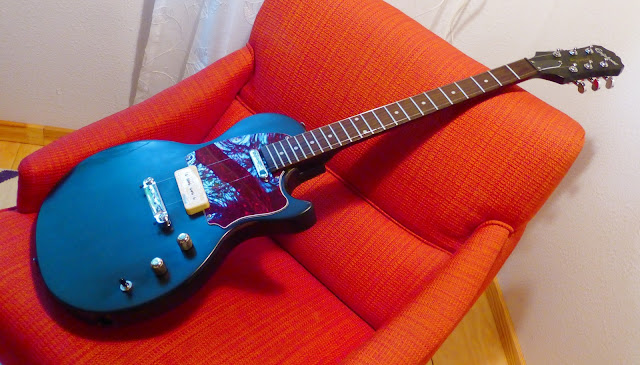 This blog post in the series about the restyling of a really ugly Epiphone Junior / Special, is kind of non informative, just odds and ends of misc stuff, thoughts, and answers to a couple questions. So this installment doesn't even rate its own number in the series, and will be Part 4.5.

The first question might be: why does the guitar only have two skinny strings on it in the photo above? Honestly, I don't remember; but if I had to guess, I'd say I was in the middle of wiring up a new pickup, and put on a couple old strings to check the phase when both pickups were switched on. Or maybe I was tweaking the bolt-on neck alignment: put on a couple strings, loosen up the neck screws just enough to grab the neck and pull it into the proper alignment, and then re-tighten the screws.

Another question I've been asked is - why do I call this guitar a "Junior - Special", when it's actually a "Special II" model? Well, to me, this Ugly Epi doesn't feel like a Les Paul Special. I have an older Gibson Les Paul Special, it's technically a "55-77" model, and its design is based on a 1950s TV Special, "TV" meaning it's got a limed mahogany finish. Regular readers of this blog might know that my old Special has made occasional appearances, although so far it's not had a starring role: 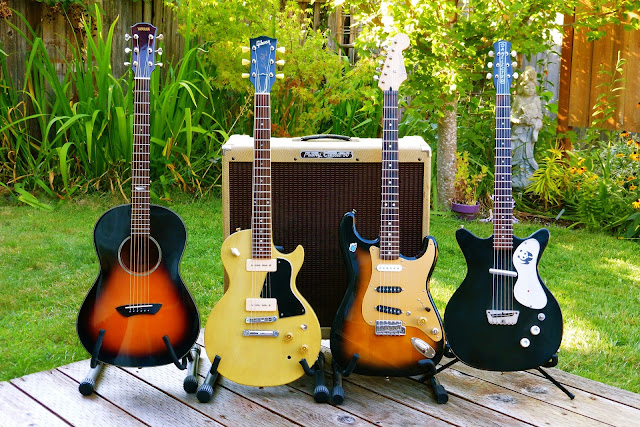 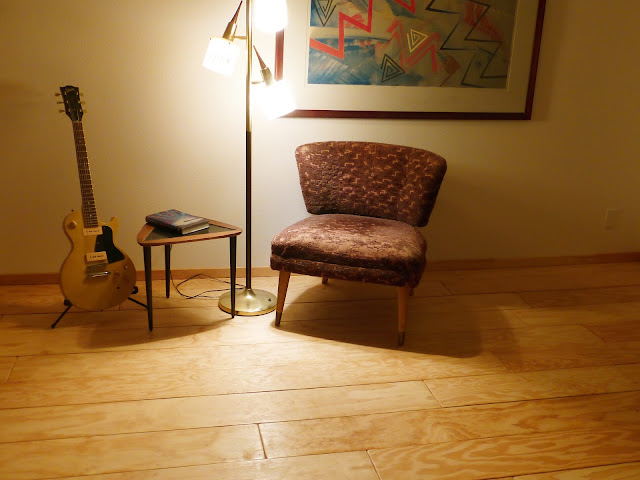 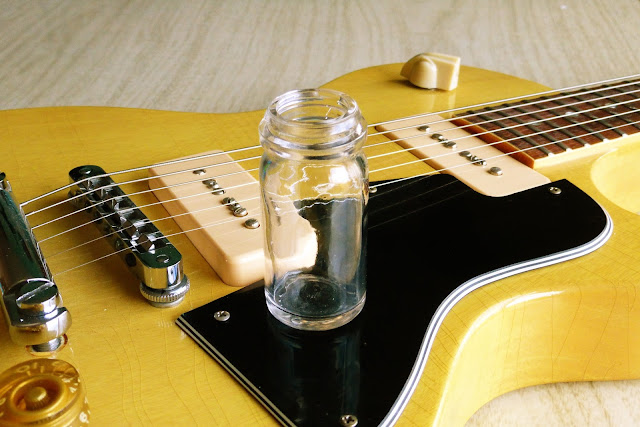 Although it was made in the 1970s, and not the '50s, it's still a "real" Les Paul Special - it has a one piece 1 3/4" thick solid mahogany unbound body, flat top, no arched maple body cap, bound fingerboard, two pickups.

These days, Gibson has a dizzying array of different models of Les Paul, but not too long ago, there were only four: Custom, Deluxe, Special, and Junior. The Custom and the Deluxe were very nice and often beautiful examples of peak wood butcher's art, assembled and finished with great care. The Special was somewhat less so, with simplified appointments and features, and the Junior was a bare bones entry level stripped down hot rod, although still made with good attention to detail. The Junior had a lighter weight, slimmer 1 1/2" thick body, no fretboard binding, and a single pickup.

So, getting back to the beast in hand, the Epiphone Special II model may have two pickups instead of one, but when you pick it up and close your eyes and play it, it's a lightweight Les Paul Junior, and there's nothing wrong with that, at all.

And if you're wondering why I call this cute little guitar "Ugly", here's a reminder from Part 1: 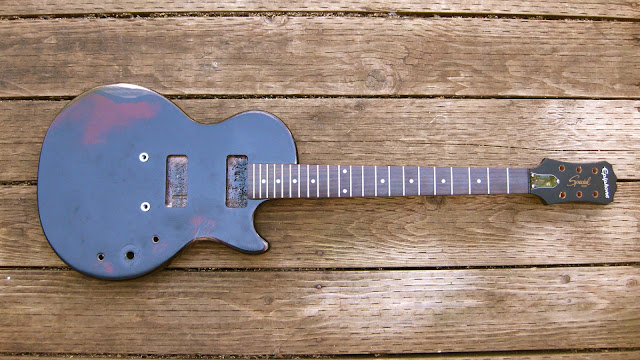 Here's the Ugly Epi side by side with the '77 Gibson Special: 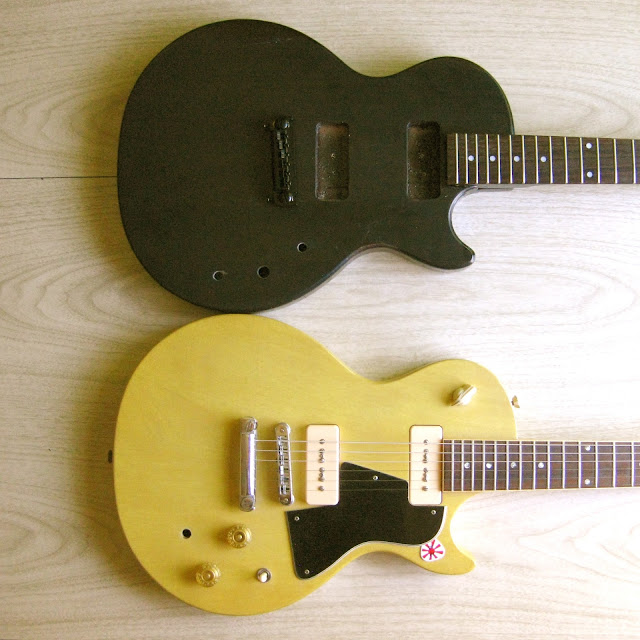 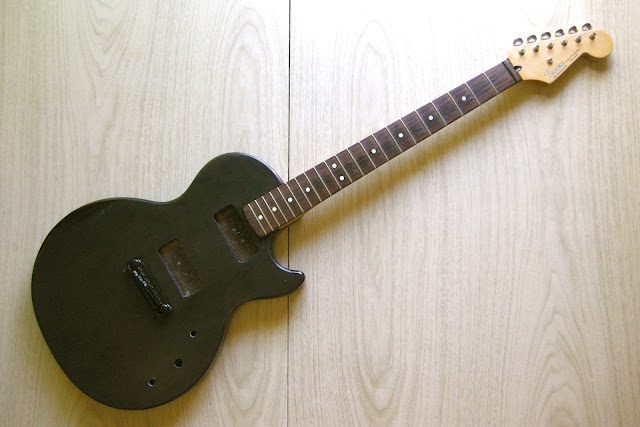 Yep, a Fender neck fits in the heel pocket just fine. The screws aren't in the same places, but it's a thought for sure. Maybe a cheaper line Squier neck wouldn't feel too bad to make new neck mount screw holes in. And how's the intonation? Check this out: 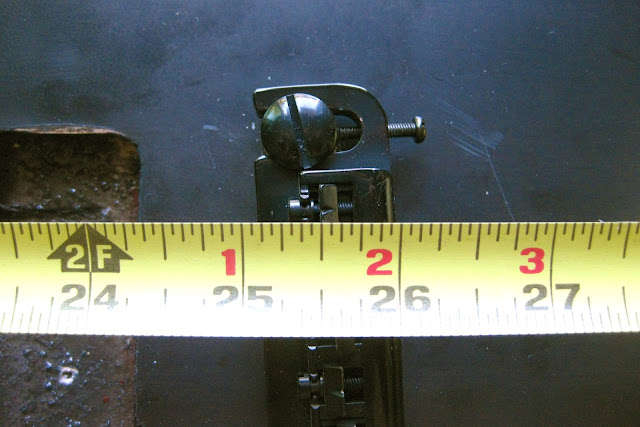 Remember, most Epiphones have a 24 3/4" scale, and Fenders usually have 25 1/2" scale necks. Maybe not every wraparound bridge would have enough range of adjustment to fit, but this El Cheapo brand Leo Quan ripoff bridge would work. Like most low-end bridges, it may not have the best tone, but oh well.

One nice possible combo would be an Epiphone Junior or Special with the blond-ish yellow finish, paired up with a Squier one-piece maple neck. Anyway, just a random thought.

Ever see a P90 pickup without a cover on? Here ya go: 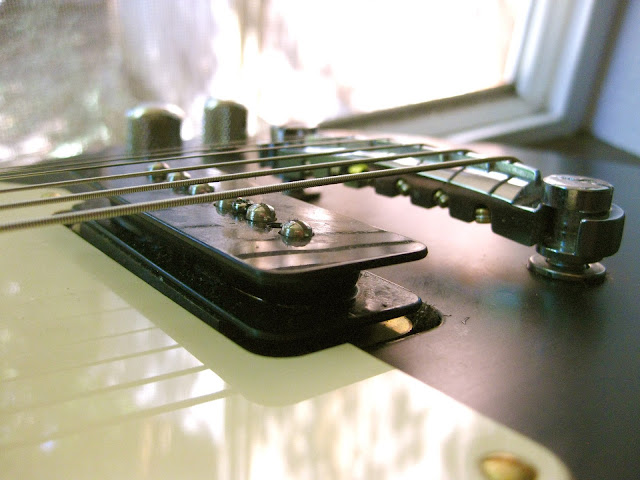 This sort of reminds me of how some steel guitar pickups look; those are usually 10 pole piece pickups instead of 6, but similar. A nice look would be a cotton string wrap, and wax potted or shellacked. Or, for heaven's sake, put some clothes on that pickup, for shame.

Another view of the really strange "not-wood" material that many, if not most, Epiphones are made of. Very moon-scape: 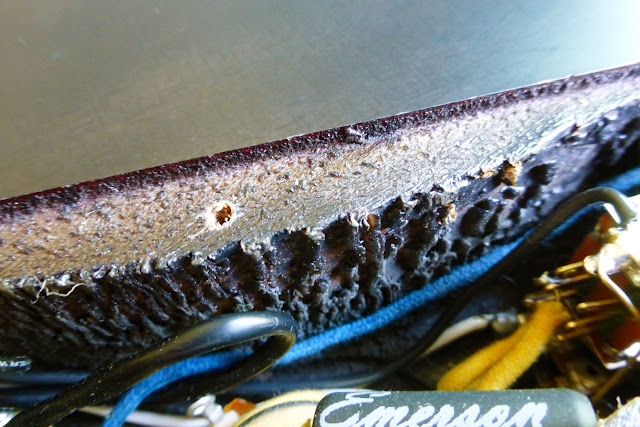 And lastly, a close up look at one of the fake-o "aged, worn" spots that a previous owner inflicted on the Epi: 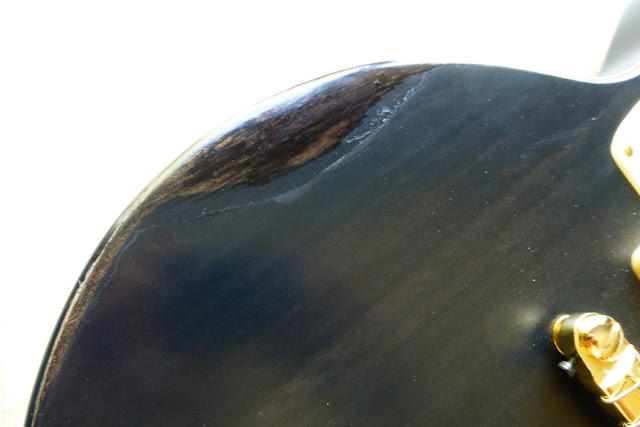 Don't know yet what to do about those finish flaws; a new paint job seems excessive on such a low-buck project. In the meantime, I simply ran a large felt tip pen over the blemishes, and from any distance, it isn't noticeable, much.

That's about all the misc thoughts I have about the Ugly Epiphone project tonight; if I think of more, I'll post them here. 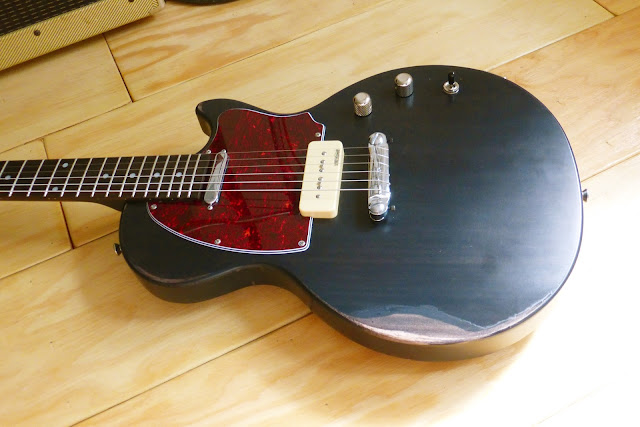 To read more about this project, check out the other installments of "Restyling an Ugly Epiphone Les Paul Junior / Special", here: Part 1, Part 2, Part 3, and Part 4.

Cool guitar, what does the tele pickup sound like on LP? I've got a 2003 Les Paul Melody Maker with a P90 in the bridge. Can't decide if I want to put another P90 in the neck, or something a bit different. The tele pup certainly looks nice.

Hi! Thanks for visiting the blog. To me, the Tele neck pickup on this LP Junior guitar sounds more like an older narrow single-coil Melody Maker, rather than a Tele. Probably stuff like wood and construction, scale length, and bridge design make more of a tonal difference, not the pickup itself. But still, hey, it sounds great. And yeah, that pickup does look shiny cool and distinctive, not what you'd expect to see.

Hello! Im love it so I gonna make my les paul special ii like that, so I have a one question to you. There 3 hole on guitar that vol, tone and pickup selector. I wanna make the selector go to front hole and vol pot to selector hole but that size of hole is not fit to them... How do i do to solve this problem?

Hello! Im love it so I gonna make my les paul special ii like that, so I have a one question to you. There 3 hole on guitar that vol, tone and pickup selector. I wanna make the selector go to front hole and vol pot to selector hole but that size of hole is not fit to them... How do i do to solve this problem?

Hi Soda! -
Thanks for getting in touch! To answer your question - you can probably tell by looking at the pictures of my own project Epiphone, that I also moved the controls to suit myself.
To enlarge a hole that previously held a volume or tone control, you'll need a "round file", made for use with wood, and slowly file out the hole until it's the right size for the pickup selector switch, which has a larger diameter than the control pots. In order to protect the finish and help keep the top finish layer from chipping, it helps to place a piece of masking tape on the front of the guitar, over the hole, before filing the hole bigger. Also, always do a filing motion from front to back, and never backwards - this also keeps the the finish from chipping. Never use a drill bit for the purpose of making a control pot hole larger; almost always, this causes very bad finish chipping, which is hard to fix.
Two more points to keep in mind: You might have to put a very thin, slightly larger diameter washer, under the retaining nut for the control pot you place into the larger hole that the selector switch was in - this isn't always necessary, but sometimes you'll need it to make sure the existing washer under the top nut doesn't sink into the larger hole. Also, the control cavity in these guitars does not have much space, and you might have to carve out a bit of the side wall so all the controls and switches fit in the limited room available. I used CTS mini size pots to minimize that problem.
Good luck with your project!